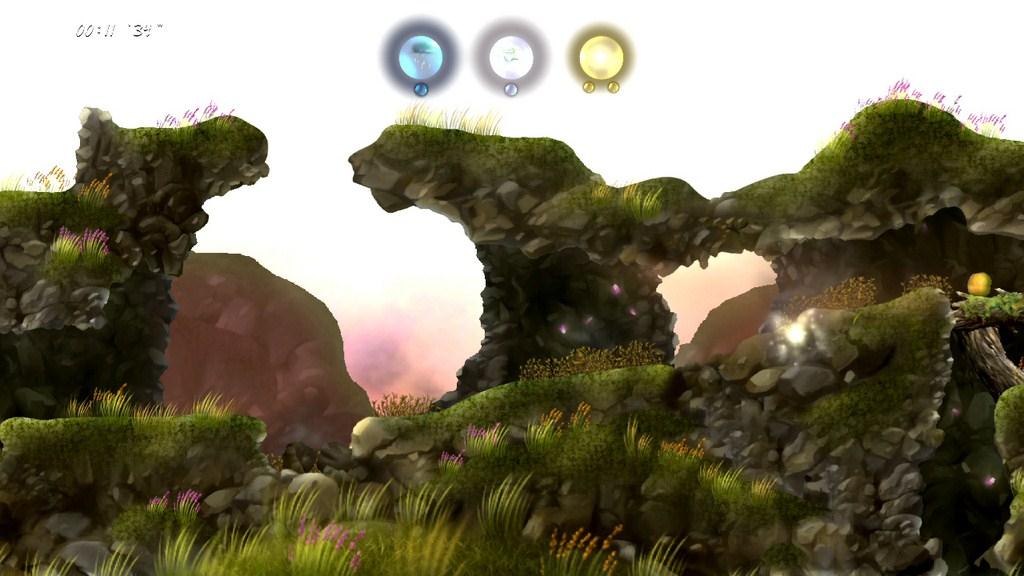 Written by Sean Colleli on 12/31/2012 for PC
More On: Storm
If you haven’t noticed, the game industry is going through some growing pains. Budgets are spiraling out of control, once-great studios are having trouble just breaking even, and all but the most bloated and hyped blockbuster titles (*cough* CoD *cough*) aren’t assured any measure of financial success. People--good people--who have been in this business for years or even decades are abruptly losing their jobs. Eurocom just laid off 75 percent of their workforce. THQ just announced bankruptcy. Even stalwart Nintendo has been feeling the pinch these days and pretty badly, with the 3DS and Wii U just starting to turn around a couple years of plummeting stocks and negative profits.

A few years ago, if you had told almost anyone in the industry that indie gaming would amount to more than a passing art house student gig, they’d have laughed in your face. Then Minecraft got huge, a former mod-turned-professional-shooter called Killing Floor became one of the top-selling games on Steam, Hotline Miami redefined grisly arcade action…well, you get the point. In this Kickstarter-fueled future, it’s the cool ideas that win, not the same old budget-stuffed franchises. Cool ideas like IndiePub’s Storm.

IndiePub, formerly Zoo Entertainment, is a little publisher based right here in Ohio--Cincinnati to be precise. They’ve been supporting fledgling developers for the past few years, funding creative new concepts, and seeing them through to completion. Storm is one of their latest titles and I’ve had some time to get acquainted with it over the past few weeks.

Storm’s premise is so independent, so potentially terrifying for a mainstream studio that it’s almost cliché…almost. You don’t control any kind of main character or protagonist, but the forces of nature themselves. In that regard, it’s similar to classic puzzle games, but it has the scope and atmosphere (no pun intended) to make it feel much grander than, say, Peggle or Tetris.

The goal of Storm is to guide a seed to fertile ground, using only the forces of wind, rain, and lightning. As with any good puzzle game, this is easier said than done, but the game does a decent job of training you on the controls and mechanics in the first few levels. You start only with wind, and with a single “charge,” allowing you only to create a single gust at a time. I found wind to be the most finicky of the three nature powers, as you must click and drag in the direction you want the wind to blow and it’s a little hard at first to determine just what direction that is. It took a little practice but I had the hang of it after a few levels, and was soon rewarded with more charges and the next power: rain.

Rain can help move the seed using water currents, but more importantly fills basins and pits so the seed can float up and out when it gets stuck. Rain is most useful when it has multiple charges--a single light shower might be fine for filling a shallow basin, but sometimes you’ll need to compound two or three charges in a row, creating a flooding deluge that can fill up huge basins. 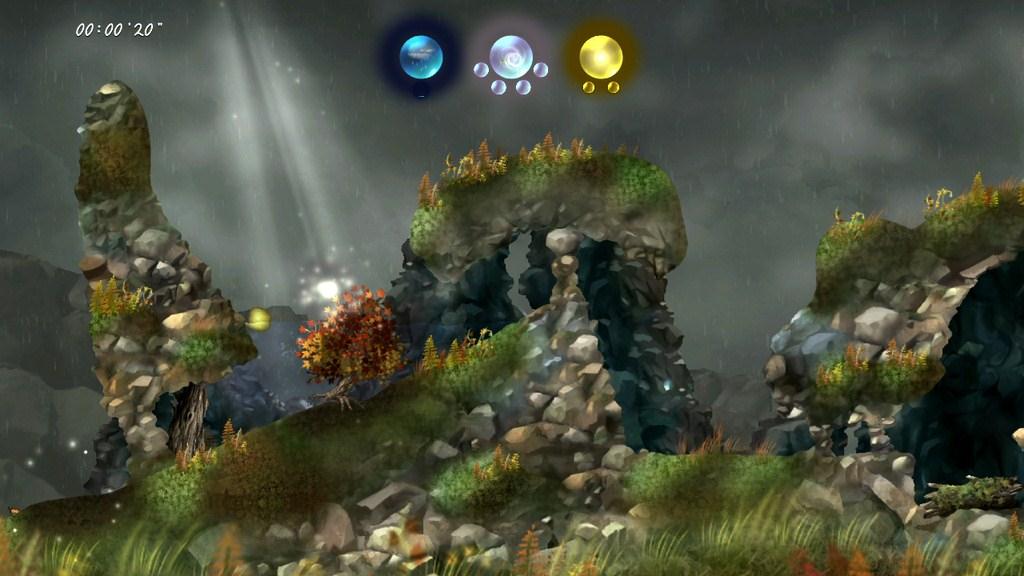 Lightning is the trickiest power to use because it does multiple things. A lightning strike near the seed can make it hop, so careful timing is needed when making the seed cross small gaps. However, lightning can’t penetrate solid surfaces--think Pikachu’s B+down strike in Smash Bros--so that must be taken into account when the seed is rolling through a cave or other obstructed passage. With multiple charges, lightning can break apart obstacles like weak stone walls, sometimes causing a landslide of boulders.

After the first few levels, Storm dispenses with the tutorials, and the meat of the game begins. Each level presents different environmental obstacles, sometimes requiring you to pick up new powers and charges from glowing elemental powerups hovering in your path. Dexterity and mastery of the controls, which are elegantly mapped to only the left, right, and middle mouse buttons, are what Storm asks for dealing with its clever complexity.

Unfortunately, as a physics-based puzzle game, you’ll run into some of the issues that typically plague the genre. With only physics to guide the seed, it sometimes gets stuck--buried under boulders, just barely trapped in a pit you can’t quite fill with rain, or stuck in a valley where it’s difficult to angle wind. These issues don’t crop up all the time, but when they do, a restart of the level is usually required. It’s annoying, yes, but at least you can retry a level almost instantaneously from the pause menu, and get hints there as well. 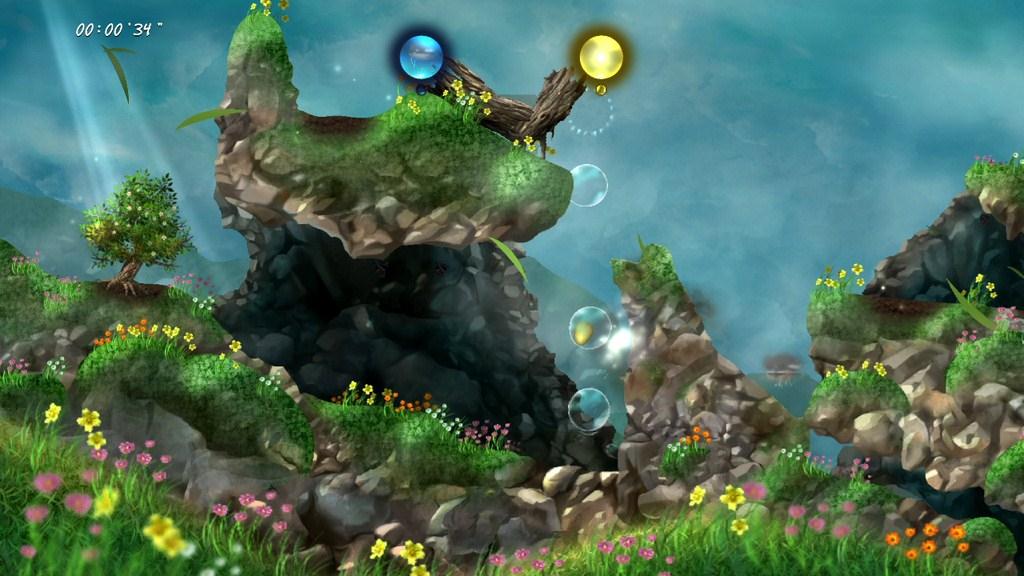 While the physics might unintentionally hinder you from time to time, Storm makes up for it with some stellar production values. It’s easily one of the prettiest puzzle games I’ve seen in years. While most physics puzzlers go for abstraction--the zany, over-saturated colors of The Splatters, or the banal, obnoxiously generic, cartoony look of Angry Birds--Storm paints its environment with appropriately picturesque nature themes.

Some areas are drenched in sunlight, others are overcast, and the setting changes with the seasons. Wind blows leaves and grass or whips it up into small tornadoes, rain spatters the screen with shimmering water droplets, and lightning scatters debris and fills the sky with foreboding clouds. Physics annoyances aside, sometimes I boot up the game just to gawk at the scenery. The whole experience is wrapped in delicate piano and woodwind music, which helps to sooth your spirits as the seed plummets into a bottomless pit during that one level you’ve attempted a dozen times.

Storm might not be wholly original, but it is one of the more intriguing and aesthetically pleasing physics puzzlers to come along in a while. You probably won’t be grinding away at an addiction like you would with Peggle, but that’s okay--Storm is a game you play as a short mind-focusing break between other tasks, to center your brain and calm your senses at the same time. In a lot of ways it reminds me of the Zenses puzzle collections developed by Shin’en for the DS a few years ago. Storm isn’t perfect, but it’s fun, relaxing, and beautiful. Whether it’s worth the $15 asking price, however, is up to you and how much you like this kind of game.
Storm has a few physics annoyances but otherwise it’s a fun, creative puzzler with some decent depth and gorgeous production values. At $15 it’s a little on the pricey side, but it’s also a far sight prettier and more creative than Angry Birds.