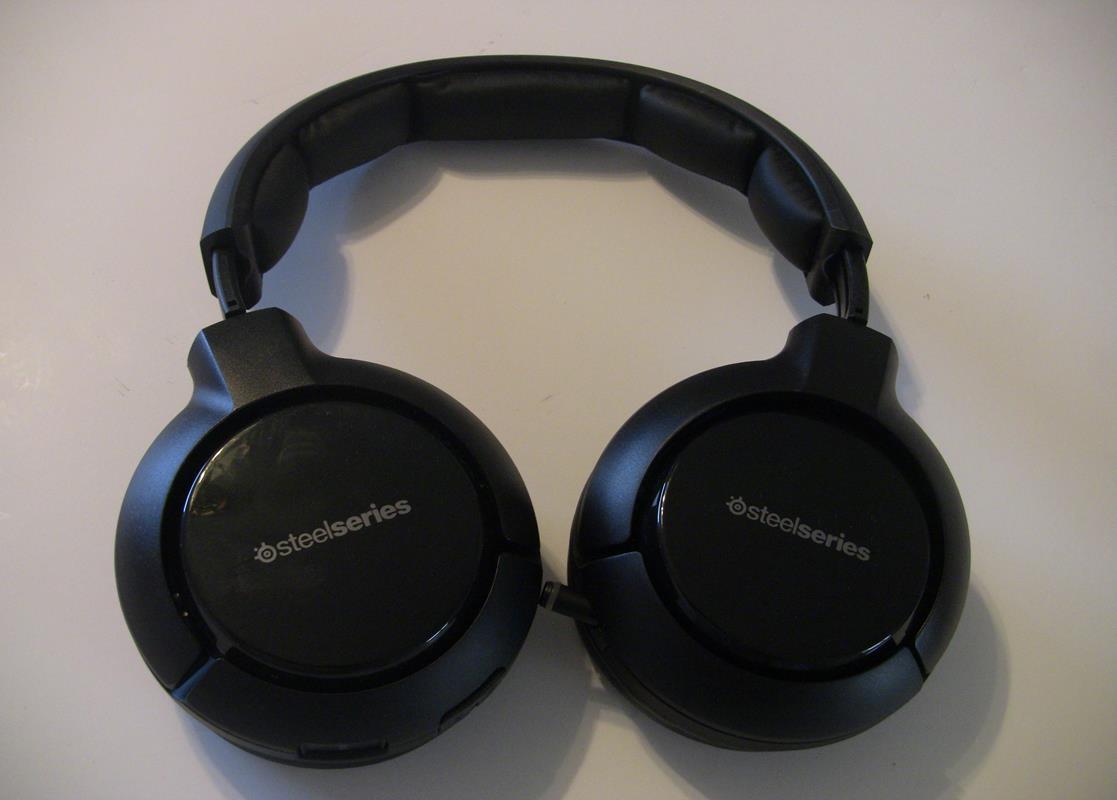 The high-end gaming headset market has become quite competitive with many companies trying to put their stamp on that segment. SteelSeries has been coming out with headsets for a while now and today we take a look at their current top dog, the SteelSeries H Wireless headset.

Coming in at $299.99, the SteelSeries H Wireless is a wireless headset that supports a virtual 7.1 surround sound setup via Dolby Digital. These large, black headphones feature a simple design. Each large, round cup holds 40mm drivers and sit on the side of you head with large, comfortable memory foam pads hugging you. The two ear cups can also rotate out 90 degrees allowing them to sit flat on your desk or in a bag, making it easier to carry around.

The right ear cup features a power button, volume dial, and a few connectors. The power button can also be used to mute your microphone with a quick tap. With the volume dial, you can also click it in to go through some of the settings that I will go more into later. When connecting to the Xbox 360, the chat plug is hidden by a rubber cover, and there’s also a share/mobile connector in there as well.

For the left ear cup, there’s the familiar retractable and bendable microphone that’s present in many of SteelSeries’ other headphones. It’s one of the better retractable headphone designs and it can be hidden and out of the way when not in use. The left ear cup also houses the battery, which is interchangeable and can last about 20 hours.

The top band also features a generous amount of memory foam for cushioning and, combined with the ear cups, I was able to use the SteelSeries H Wireless for hours on end without feeling uncomfortable. That said, the headset does seem to cater to smaller heads, but perhaps over time a person with a larger head could work it to a point where it’s not as tight.

There is a transmitter box that ties the headset and your audio source of choice together. The small, black box needs a power source and you can plug it into a power outlet with the included power adapter or just plug it into a USB port. I was able to successfully power the transmitter with my computer setup by using one of the available USB ports on my PC. 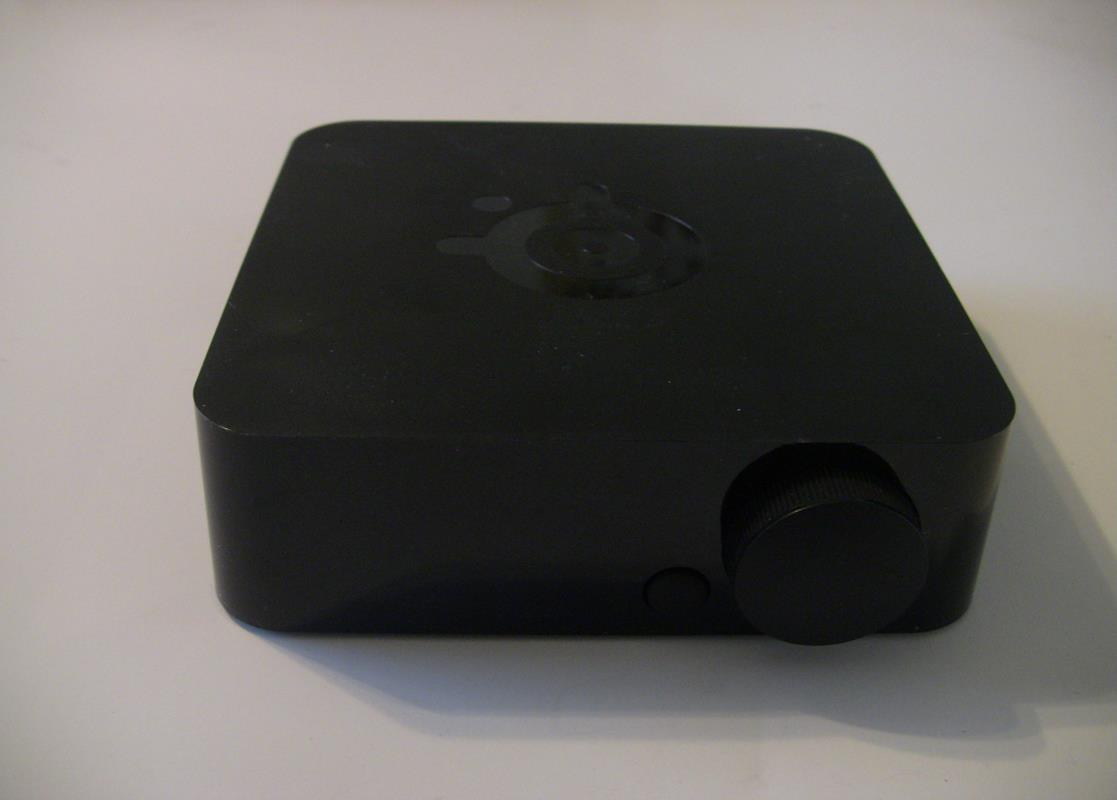 The front of the transmitter box has a nice OLED display that will give you some general information such as the battery level of your headset, what source you are using, and some mix settings. The large dial on front can be used to adjust the volume or adjust settings that a smaller button next to it can select.

On the back, you get a S/PDIF in and out, USB connection, a 3.5mm chat out connector, and 3.5mm audio in connector. The SteelSeries H Wireless can connect to all of the last generation consoles and the PlayStation 4, with SteelSeries being nice enough to include every possible cable you will ever need for the setup. Once Microsoft releases the Xbox One chat adapter, you’ll be able to use these headphones with it as well.

The transmitter box not only allows you to select between audio sources, but you can have a few mix settings as well. When using it with a console, one can increase the volume of the voice over the game sounds via ChatMix. You can also go the opposite way if you don’t want to hear anyone chat at all. You can also let the transmitter adjust the chat volume for you with LiveMix. Finally, there’s a basic equalizer setup if you want to fine tune your audio experience.

SteelSeries was smart enough to include a second battery and it can be charged inside the transmitter box. While you’re using one, the other is being charged and you can flip them easily when one’s running out of juice. The OLED display will also show you the charge level of the battery inside the transmitter box as well. While I also would have liked the ability to charge and play with just the headset, the inclusion of a second battery should suit most everyone’s needs to have a headset ready to go with power. 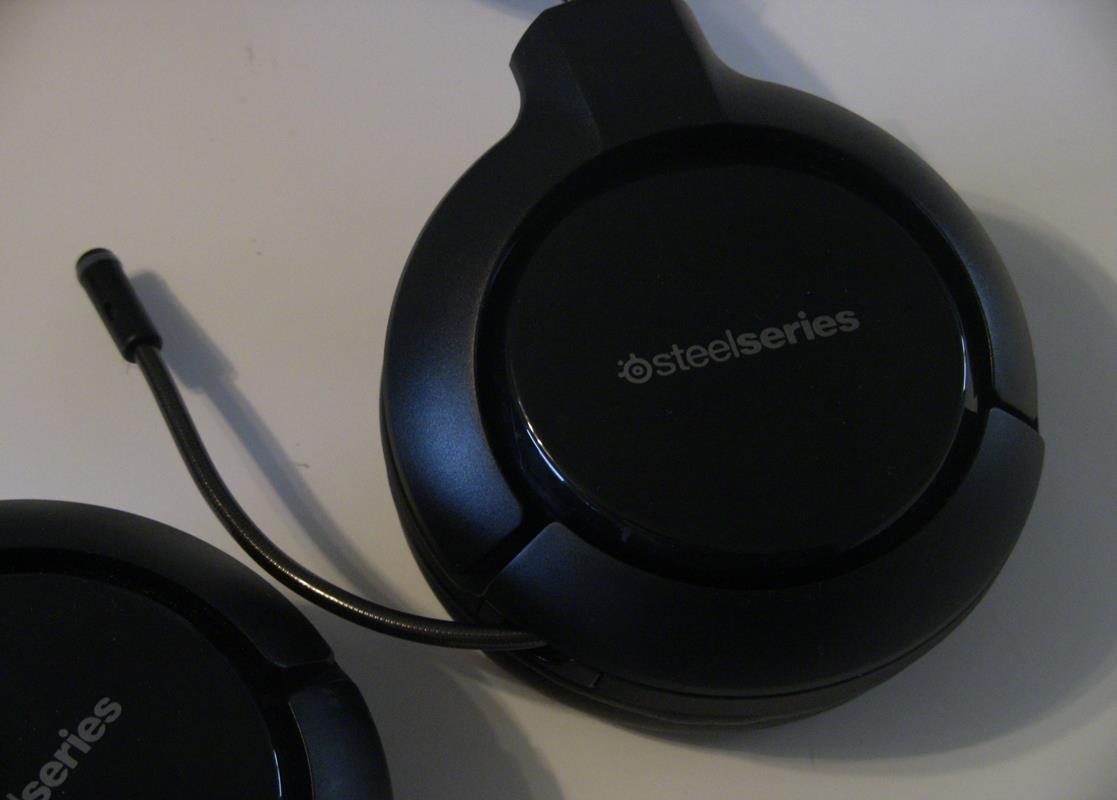 That’s not to say you can’t use the SteelSeries H Wireless without power. Included in the box is a mobile cable to let you use the headphones with a mobile device or, in a pinch, on the PC using the headphone jack. The ability to use the SteelSeries H Wireless with mobile devices makes it a versatile headset allowing for you to listen to music or game sounds both at home and on the go.

For my setup, I decided to use the SteelSeries H Wireless with my PC and plugged the optical cable from my computer into the transmitter box. I then plugged the chat out cable to the PC’s voice connector and I was all set. I made sure to enable Dolby Digital in the settings and was off and running playing games, watching movies, and listening to music.

To say the SteelSeries H Wireless doesn’t sound wonderful on all scenarios would be lying, as the headset performed incredibly in music, movies, and games. From the highs, mids, and lows, the SteelSeries H Wireless sounded great. Seeing as this set was used primarily for gaming—and that’s what they were designed for—it’s no shock when they far exceeded my expectations during sessions of Diablo III, Battlefield 4, and BioShock Infinite. While it doesn’t have the strongest bass, it did do pretty well on that end in either case. All ranges were clear and precise making this headset one of the best ones I’ve used on my PC. 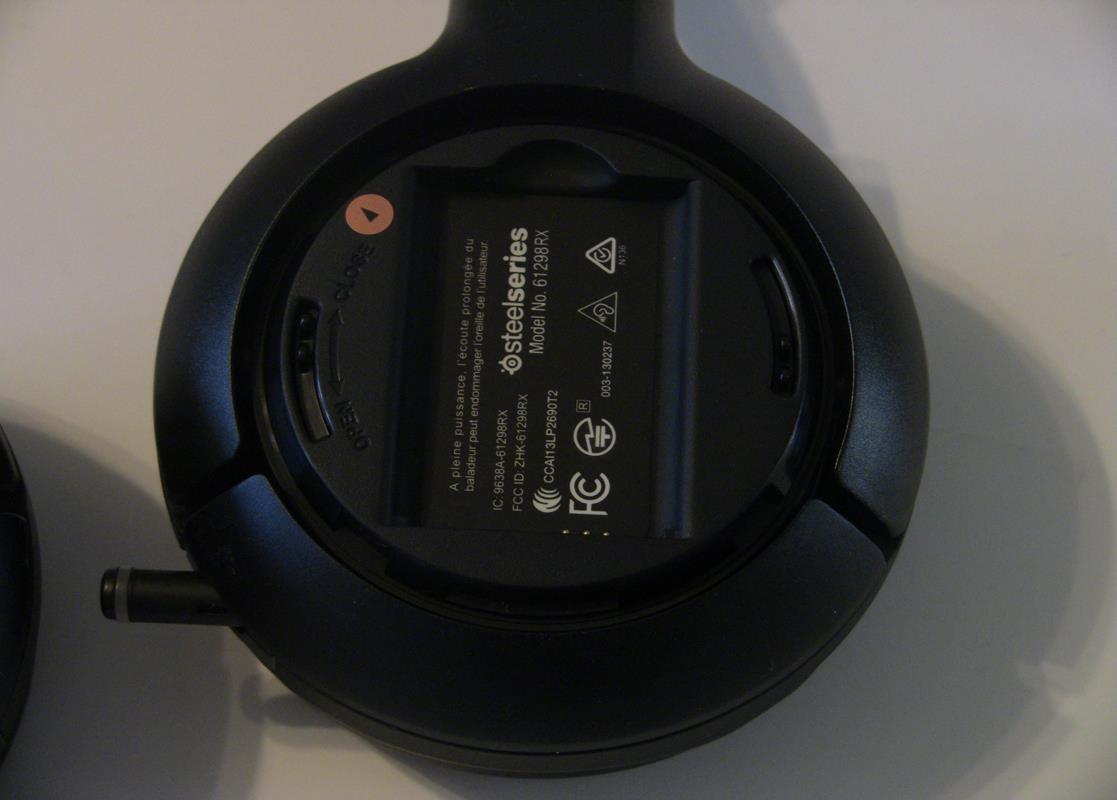 I’m not one to always hear the nuances of surround sound in a headset, but the SteelSeries H Wireless did one of the better jobs of providing simulated surround sound out there that I’ve tested. Yes, I could tell directionally where things such as gunfire and footsteps came from. This helped for games like Left 4 Dead 2 and Battlefield 4, of course. It wasn’t as distinct as a full 7.1 speaker setup, but for two drivers and software to simulate surround sound, the SteelSeries H Wireless did a fabulous job.

I couldn’t hear any distortion on higher volume settings as well. I’m not one to listen to a headset at very high volumes, but the SteelSeries H Wireless has the ability to output some serious volume. The volume dial really made it easy to adjust how loud or quiet I wanted the headset to be when used in conjunction with the transmitter box.

For wireless, the SteelSeries H Wireless had no issues in the various environments I tested in. I can’t remember one time where it would cut out or something would interfere with it. And range? Forty feet is what they say the range is and the range is incredible. I was able to go from my basement, up two floors, and into every corner of my house without losing connection to my computer. Music continued to blare through the headset without skipping a beat. I actually remoted into my computer in the basement to change the music using my phone while I was two floors away. Yes, the range on this set is that impressive. 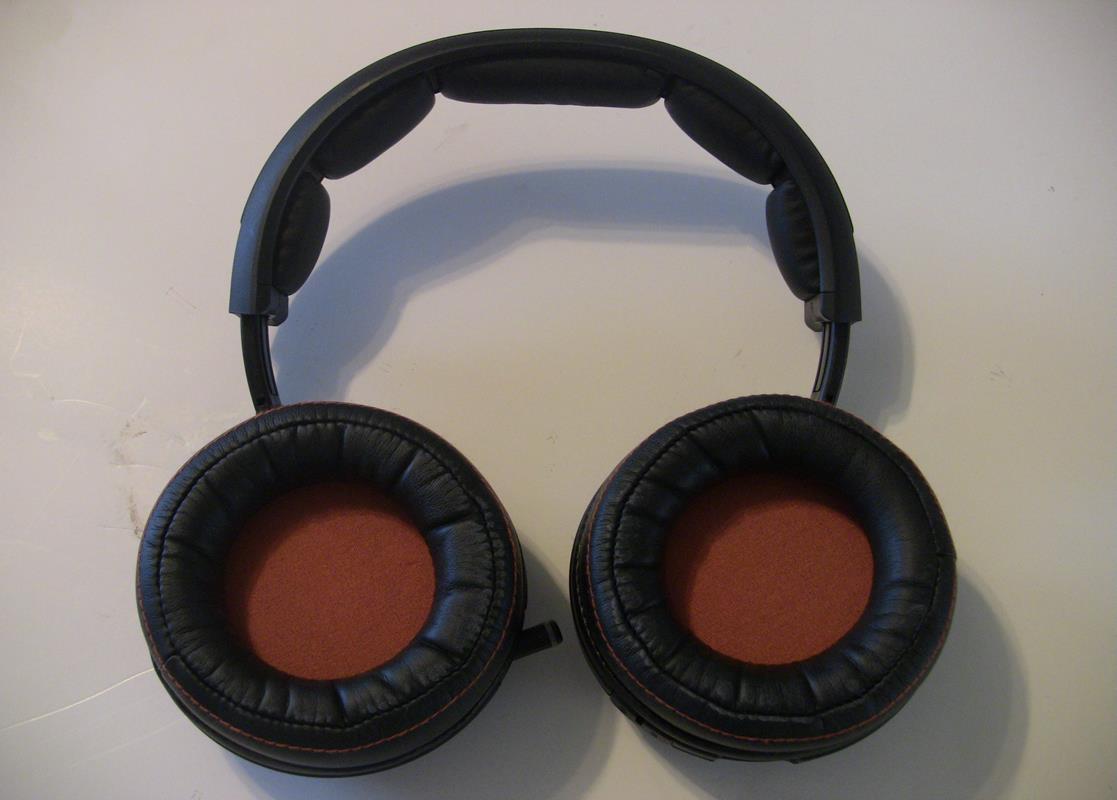 You do get about 20 hours of usage between battery changes and the battery charges in about six hours or so. I was able to go through a few days usage before I had to change, so what SteelSeries says is true when talking about battery life. With the dual-battery design, you should always be powered up, unless you forgot to pop in a battery into the charger, of course.

Talking with my friends, the retractable mic on the SteelSeries H Wireless performed admirably. My friends said I sounded clear and distortion free. And since it’s retractable, it slides easily out of the way when not in use. Also, when you mute the mic, the end glows red to let you visually know it’s not transmitting audio, which is a nice little touch.

There aren’t many complaints I have with the SteelSeries H Wireless. Other than a few design changes I would’ve liked, the set is top notch and one that really exhibits high quality in both sound and design. SteelSeries includes all the cables you’ll ever need and the setup will work on many, many consoles and PCs. They’re versatile enough to work with your mobile device without power. They are incredibly comfortable to wear and great to listen to in gaming, movies, and music. This set would’ve been my favorite of all time if it also supported Bluetooth as well. In any case, I highly recommend the SteelSeries H Wireless if you can afford them as they are one of the best headphones I’ve used in a gaming environment.

One of the best headsets I've used, the SteelSeries H Wireless is versatile, easy to setup, and incredible sounding. They cost a lot, but it's hard to find a better wireless gaming headset then what SteelSeries has done here.