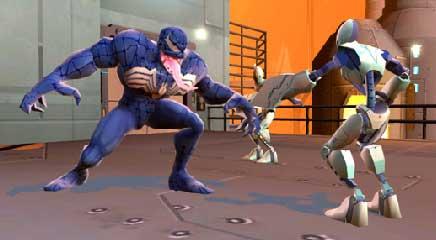 Written by Sean Colleli on 11/29/2007 for PC
More On: Spiderman Friend or Foe
Activision has been mining the Spider Man license for the past decade or so, ever since the excellent adventure game for the PS1, N64 and Dreamcast. The various teams at Treyarch, Neversoft and Vicarious Visions have delivered some great titles over the years, including games based on all three feature films. While the first two movies delivered some solid web slinging (the first was a competent adventure, the second a free roaming sandbox New York), Spiderman 3 was a major disappointment across all platforms. Ultimate Spiderman was a pleasant surprise, and had the charm and corny wit of the comics that the movies were lacking. Now Activision is taking one last stab at the franchise, specifically the movies, with Spiderman: Friend or Foe. This game is an alternative take on the movies, with a different play style and gameplay focus.

The game supposedly starts some time after the movies, with several of Spidey’s super villain rivals inexplicably resurrected. All of the characters are styled to look like the ones in the films, so Green Goblin still looks like a Power Ranger, Venom is still a skinny wimp, and Harry Osborn still looks incredibly stupid. The game begins with all of these villains getting captured by some bigger villain, who has harnessed the power of the symbiots or somesuch nonsense. It’s up to the web-head to rescue his nemeses, and grudgingly team up with them to stop the greater evil. Nick Fury of S.H.I.E.L.D. is Spidey’s backup, offering his headquarters as a base of operations and providing Spiderman with his mission objectives.

This premise may seem a little ridiculous compared to the plots of the movies, but that’s really the whole idea. Friend or Foe has the tongue-in-cheek, self referencing humor that the movies didn’t, which is a refreshing change from Tobey Maguire’s angsty emo-Parker. In any case, it’s a perfect excuse for the game’s main mechanic. Instead of a sandbox game, it’s an old-school beat-em-up. Instead of taking after Maximum Carnage and the brawlers of old, Friend or Foe feels more like the Spiderman version of Lego Star Wars.

Each level is played in a team, with Spidey accompanied by one of his enemies-turned-ally. In solo mode, the sidekick is controlled by the computer, and it does a competent job of assisting you. You can swap between the two characters at any time by holding the Tab key, which works well and can be done quickly. Solo play is fun for a while, but this game is really meant to be played with two people.

Like Lego Star Wars, Friend or Foe is built on the “drop-in, drop-out” concept. A second player can start a co-op game from the start of a level, or enter at any time by picking up a second controller and pressing start. Many of the game’s features, such as team combos, are much easier to pull off when you have a sapient companion helping you out. The easy co-op makes this a good family game, as it has a simple, uncluttered multiplayer setup that anyone can use. It would’ve been nice if the game had on-line play, but the feature is strangely absent from the PC build. I wouldn’t expect it to have a server browser or anything that elaborate, but an Xbox Live style friends list would’ve been nice. As it stands, the only way to play with a friend is by chunking a second controller into your PC.

The combat and controls are pretty standard for this kind of game, if you have the right equipment. A single player can use the keyboard, but if a friend wants to play you’ll need to plug in a USB gamepad. The manual proudly states that Friend or Foe is compatible with the Xbox 360 pad, as the game is part of Microsoft’s half-hearted “Games for Windows” initiative. Any USB controller will work, and to be honest the game almost requires one. With the keyboard, playing Friend or Foe is just awkward, evidence that the game was made with consoles in mind. The actual combat is relatively simplistic, in keeping with the game’s pick up and play mechanics.

Every character has standard melee attacks and grabs. Combo multipliers are achieved by “juggling” an enemy in the air; the game plays fast and loose with the laws of physics, so it’s common to uppercut a bad guy into the air, and then beat on him for several seconds as he floats there. The game tries to balance the sidekicks and Spidey, but ultimately the web-head is the best character. The sidekicks have a couple special moves that can be upgraded, but Spidey’s web lab grants him a much wider selection of attacks and grapples. Every character has the same access to damage, health and speed upgrades, but all of the sidekicks come off as underpowered. You and your friend will probably end up arguing over who gets to be Spiderman next round.

Even with the underpowered sidekicks, the game is a breeze. There is no penalty for dying, aside from losing some upgrade tokens, but these are so numerous that it really isn’t a problem. Friend or Foe is so forgiving that older players will quickly get bored, but the game’s target casual audience should have fun. Playing as the villains does offer a bit more challenge because they are so limited compared to Spiderman.

Spidey ends up as probably the most varied aspect of Friend or Foe. The levels range from Tokyo to Egypt, but the gameplay never changes much. The enemies you fight are pretty much the same from start to finish, and most of the boss fights involve chucking debris at the villain du-jour. Friend or Foe has the same kind of repetition you find in many brawlers, but for some reason it just gets stale fast in this game. There are pickups and extras to find along the way, but most of those are used to buy the character upgrades or unlock levels for the boring versus mode. The rest of the powerups activate special moves or grant invincibility, which make an easy game even less of a challenge.

Friend or Foe doesn’t impress much on the visual front, even on the PC. After playing the Wii version I expected some kind of graphical upgrade, but aside from some crisper textures and maybe a few shaders, Friend or Foe looks about the same across all platforms. The levels have a bland, generic appearance that corresponds to the current theme, so even if the backdrop is different the gameplay won’t change at all. The characters take after their movie counterparts but have a goofy, toy-like style that fits with the game’s humor. They tend to blend in with the environments though, and in the chaos I lost track of my character numerous times. The battles usually degenerated into a mess of particle effects and explosions, so to survive I just started button mashing. The PC version doesn’t take advantage of next-gen graphics technology, and considering the game is pretty simple to begin with, a lack of graphical flair is rather glaring.

The sound fares about the same, except for one aspect: voice acting. After Tobey Maguire’s dull, monotone acting in the other movie games, the lively Spiderman voice actor in Friend or Foe is a nice change. All of the characters have much better dialogue to work with, even if some of it is campy. It’s certainly better than the wooden stuff they droned out in the movie games. Most of the acting is done in the cutscenes, which are well done and choreographed for a more lighthearted attitude. I liked the Spidey voice actor from Ultimate Spiderman better—his lines were snappier and his delivery was tighter, but this new guy is a workable analog, and definitely preferable to Maguire.

In some ways, Friend or Foe is a more enjoyable experience than the wholly disappointing Spiderman 3, but instead of a better sandbox game we have a mediocre brawler. Friend or Foe really is Lego Spiderman, a game I’m surprised hasn’t been made yet. At the same time, it lacks the charm and depth of the Lego Star Wars titles it seems to emulate, offering instead some very repetitive gameplay and a list of characters that are unfortunately not very fun to play as. Friend or Foe is a rent at most, but it doesn’t warrant the same price as a standard PC game and will probably end up boring the kid audience it was intended for.
Spiderman Friend or Foe is obviously an attempt to cash in on the holiday rush. It doesn’t have the variety necessary to keep anyone playing for long, and the presentation is average at best. The dialogue is refreshingly funny, but only because we’ve been watching the self-indulgent Spiderman movies for the past few years. The lack of any real advantages in the PC version, like online play or better graphics, makes this game even more disappointing for PC owners. Do yourself a favor and keep this repetitive brawler off your holiday gift list.