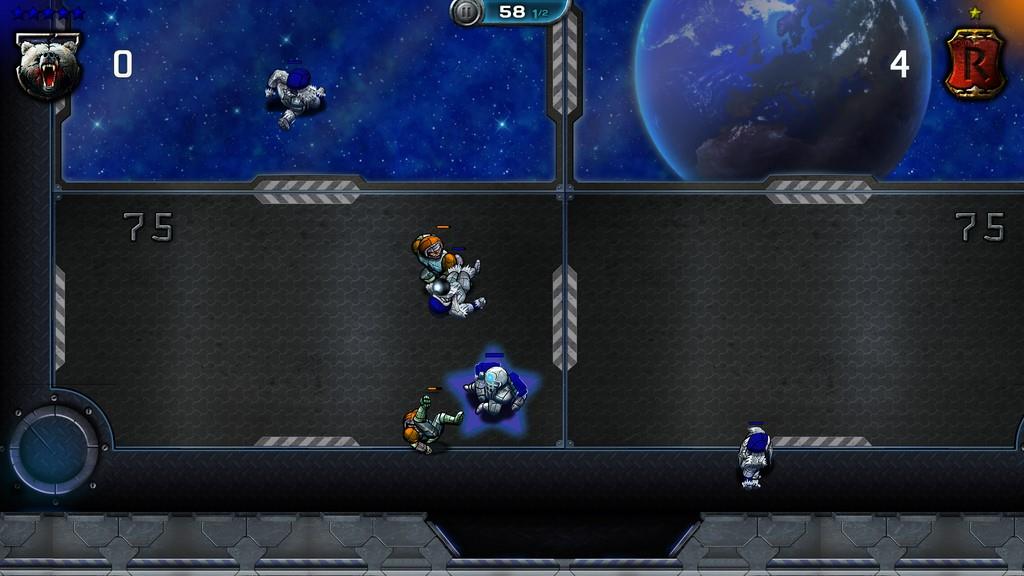 I had no idea what to expect.  I had not played the first Speedball at all, nor had I even heard of the franchise. I was assured that, as a sports fan and, more importantly, as a soccer fan, I would be able to relate to the game and come to enjoy it. It wasn't just enjoyment for me, however, as Speedball 2 HD tapped into my younger days of arcades and early consoles.

Speedball 2 HD is straightforward with just about everything: pick a team, build it up, win titles, all while kicking ass along the way. Speedball 2 is a hybrid sports title that is mostly association football (soccer, for those of us here in the United States) mixed with hockey. After playing for about 20 minutes, I realized that this is basically the Arch Rivals or Bill Laimbeer's Combat Basketball of association football. There are no pesky yellow or red cards to worry about and contact is not only encouraged, but rewarded with points in one of those most bizarre yet fun scoring systems that I've ever played in a sports title. Here's a list of all the possible ways to score that I discovered in my time with Speedball 2 HD:

Speedball 2 HD basically gives any player multiple chances to score and win with varying styles of play. Deciding to go with all hulking monsters on a team can give an advantage to knocking players out left and right, garnering 10 points once they are finished and need to be subbed out. Speedy players can weave in and out of a defense and score against the wall or at goal fairly quickly. In short, this game is tossed into a blender and put on the highest speed with about four different sports in mind. If these crazy scoring rules weren't enough to make things wild, random power-ups are also available throughout the match, which is two 90-second halves (games usually last somewhere around five to six minutes, depending on scoring, substitutes, etc.), and can be picked up simply by running a player over the icon. These power-ups will do anything, from giving a team a simple speed boost to making an entire team invincible, or even turning the opposing team into gigantic blocks of ice. Seriously, it's that over the top.

Speedball 2 HD is primarily a single-player title. A player will start off by picking a team that has a baseline rating (one to five stars) with various styles of play. Once a team is picked, the player then renames that team to whatever he or she wishes, and begins the climb to the top. The game uses a promotion/relegation system, so the top team in the league moves up to the next division, while the bottom team from that division above gets dropped down. There are eight teams in each division, so teams placed 2nd through 7th will hold and play in that league the following season. In between each season is an Intergalactic Tournament which can result in some very unbalanced match ups early on. I wasn't shocked in the least when my very first team was slaughtered to the tune of 160 to 20 because it was a five-star team against my two-star scrubs. Once league play starts, the balance evens out and earning money for performances results in being able to upgrade and buy much better players.  If a player opts to build up their current players, they may do so by hitting the gym and using money on training sessions. Beware with this tactic, though, as some players will have a certain potential and max out before possibly hitting the magic five stars.

This game isn't all positives, unfortunately, as early on it can be extremely confusing and intimidating. My first three or four matches resulted in heavy defeats because I wasn't really aware of what was going on during the match. There are spots where a ball can be teleported across the pitch to another player. Even stranger, on either side of the 50 yard line there is a little ramp where the ball can be thrown into, circled around, and shot into the opposite zone at a high rate of speed. Learning how the power-ups and tricks are on the pitch during a match will greatly help out in the early leagues, but it can be quite frustrating not knowing how, where, or why a ball did what it did and how it just randomly disappeared out of your player's hands. Another frustrating part is the inconsistent passing. There are no FIFA-esque through balls or leading passes. If the player opts to pass the ball, it's going where it's aimed, which is almost always at a player, forcing him to stop and wait for it. It can be disappointing when leading a break and having it come screeching to a halt because you see a player making for the far post, only to have him cut back 10 yards because the pass is almost guaranteed to be terrible. Learning one-on-one play is vital and passing should really be kept to the defensive end or midfield. In the attacking zone, it needs to be the center forward with the ball or one of the wingers.

There is multiplayer available for Speedball 2 HD, but sadly, it is only for local play. There is no online option to take on players around the world, which I desperately want this title to have. The AI can be wildly inconsistent to play against, especially in the earlier divisions. It is also brutal to jump from the lowest division into a cup tie against a five-star team and proceed to get destroyed. Having a multiplayer online would really be fun and I hope it's something that is considered to be added into the future or even created as a separate title.

Wrapping up, even with some glaring flaws in the gameplay and a lack of online multiplayer, Speedball 2 HD is gloriously fun by combining association football with just about every full contact sport out there. It is rewarding to not only gain an advantage by tackling a player, but for it to actually count for something at the same time. The interface is simplistic and yet gets the job done as building up a team is very easy to understand and results in plenty of replayability in the ascension towards the top division. This title is is a nice, quick buy for anyone wanting an in-your-face sports title to enjoy.

Fast paced and hard hitting, Speedball 2 HD combines full contact sports with association football and comes out pretty well. Since this title has some flaws and lacks online multiplayer, it isn't going to win the top division, but it holds its own and is certainly fun to play.