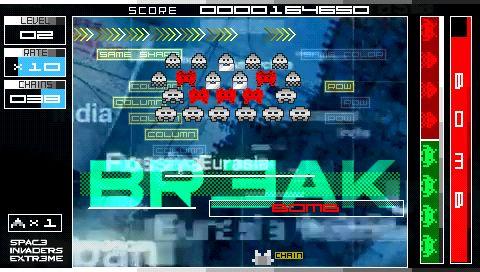 Written by Cyril Lachel on 7/3/2008 for PSP
More On: Space Invaders Extreme
It's never easy to update a classic game. For every New Super Mario Bros. or Pac-Man: Championship Edition, there's an Alien Syndrome, Battlezone Evolved or Shinobi. It's a balancing game trying to keep both old school gamers and brand new gamers excited about an old title, especially when the game in question is something as monumental as Space Invaders. This is not the kind of game where you can just slap a new coat of paint on; the developer has to figure out a way of keeping the spirit of the original game, all while making the game relevant for the 21st century.

I'll be honest with you, I was skeptical going in to this review. While I appreciate the importance of the original Space Invaders, I have never been one of those fanatical people who will swear by it. For me the game was always too slow and repetitive, I preferred faster paced shoot-em-ups, like Thunder Force 3, R-Type and Darius R. In the past Taito has tried to resurrect the Space Invaders franchise, but for whatever reason none of the sequels or spin-offs managed to impress quite like the original game. But all that has changed, because if there's justice in this world then gamers of all ages will run out to the stores and buy one of the best portable games of the year.

Don't be fooled by the stupid name and crazy backwards letters, Space Invaders Extreme [sic] is a phenomenal update to the 1978 game. Scratch that, Space Invaders Extreme may be the best retro resurrection since Pac-Man: Championship Edition. This is a game that takes the flavor of the original game and adds so many new concepts and ideas that I wouldn't be surprised if other companies don't start putting out similar updates. And best of all, for the first time ever I have played a Space Invaders game that doesn't feel slow and repetitive.

Space Invaders Extreme starts out like any other classic shooter; you're a small triangular space ship that sits at the bottom of the screen moving left and right. Above you (or rather, in front of you) are row after row of space aliens, all working their way to the bottom of the screen. If all this sounds familiar then you clearly remember the original Space Invaders, because for the first few minutes you'll think that you're playing that 30 year old game. 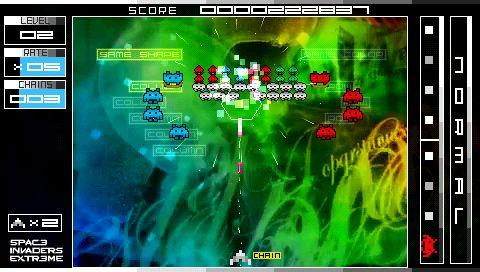 But it won't take long before you see how much deeper this reboot is. Essentially you're doing the same thing that you did 30 years ago, only this time around the rules have changes, there are a ton of different challenges, crazy new power-ups and end level bosses. And we haven't even started talking about the aliens yet. While Taito could have drawn up some polygonal alien creatures that spew acid and explode into a pile of green goo when hit, but instead they chose to keep the simple design of the original game. But don't be fooled by their appearance, because this time around these aliens come in all different colors and sizes. Before the end of the game you'll run into gigantic aliens, tiny aliens, green aliens, red aliens, shielded aliens and more. The game is constantly throwing new types of aliens at you, all while you're zipping around the bottom of the screen dodging fire and picking up power-ups.

Instead of just dropping power-ups randomly, Space Invaders Extreme rewards you for shooting a four aliens of the same color in a row. If you are able to do that then a colored square will drop giving you one of the new powers. While these new powers will only last for a few seconds, there's no denying how cool they are. There's this feeling you get when you first pick up the blue laser (a giant, constant laser stream that shoots all the way to the top of the screen, killing everything it comes in contact with) that will remind you of how awesome a 2D shoot-em-up can be. And to toss in the wrinkle that you now have to actively plan on how to get power-ups is ingenious.

It's not just the powerful power-ups that will impress; it's the sheer amount of cool bonus stages that you will get warped into. These bonus stages are played for points, so you needn't worry about dying or losing your power-up. While going into a bonus round the game will ask you to perform a task (shoot a certain amount of one color, pick up a certain amount of items, etc.) and then give you a time limit. If you can beat these challenges you'll be given bonus points and an upgraded weapon, fail them and you're back where you started. What's cool about these bonus-stages is how they change up the gameplay, for example, some of the bonus level make the bottom surface slippery, forcing your space ship to move to the sides uncontrollably. It's that sort of thing that plays on the Space Invader convention in a new and interesting way, some of these bonus stages are the highlights of this brand new game.For me the most jarring aspect of this new Space Invaders is that it is actually split up into levels, very similar to a lot of the classic shooters that came after the 30 year old original. As you play the game you'll start to notice that the game isn't as random as it looks, there's a rhyme and a reason to each level. There's even a fun boss battle at the end of each stage. It may not have a story, but Space Invaders Extreme is definitely a more linear experience than what we saw in the original game and its sequels.

The one complaint against the arcade mode is the length, which is admittedly a bit on the short side. If you don't worry about the bonus levels and just focus on completing the game's five levels, then you should be able to shoot your way through this level in just around an hour. That's right; the full single-player campaign is no longer than one hour. Sure I would have liked more, but at the same time I can't help but gush over the content that is actually in that hour. And unlike story-driven games, you'll actually want to go back through this game over and over again, so there is definitely replay value in this $20 game.

But don't take the game's short single-player campaign to mean that Space Invaders Extreme is easy. At first everything seems simple enough, but it won't take more than a level or two before you begin having to work to survive. There is nothing worse than getting to the end level boss and then dying, only to be thrown all the way back to the beginning of the level and asked to do it all again. So many times I threw down my PSP (gently, of course) and vowed I wouldn't play it again. Yet there I was, no more than three minutes later, trying it again. Yes, the game can be frustrating, but somehow that anger and bitterness only last a few seconds, then you're off trying these levels all over again.

When you're done with the single-player mode there are a number of other things you can do with the game. For starters, you can try your luck at the harder difficulties. Not only will the enemies be harder, but you will also be privy to brand new levels. You can also go in and play all of the individual levels that you've unlocked, which can be fun ... if you're the kind of person who likes besting your hi score. 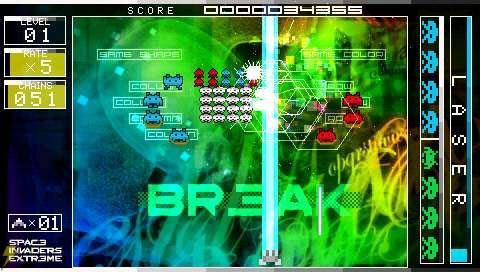 Perhaps the most exciting mode is the multiplayer mode, which allows you and another player to battle it out one on one. Although this mode is on the simple side, it's hard to deny how addictive the two-player mode in Space Invaders Extreme is. Unfortunately this PSP game does not have online play, which is something that came standard with the Nintendo DS version. And that's not the only thing missing from this version of the game; you also can't browse the online leader boards. I'm not sure why Taito made these cuts, but it's disappointing nonetheless.

Thankfully Taito didn't downgrade Space Invader Extreme's presentation. The simple truth is that this game looks fantastic. It may not look as detailed as God of War or Crisis Core, but nobody is going to argue that the graphics are disappointing. All of the aliens look crystal clear, the effects are cool and the backgrounds look like they were ripped out of Lumines. Like Pac-Man: Championship Edition, Space Invaders Extreme manages to have a fantastic new look, all while retaining the classic motif of the original game. It's a tightrope Taito had to walk, but they did it with absolute perfection.

Sadly the music isn't nearly as good as the graphics, but there's no reason you need to keep the sound on. For a game that feels like it was influenced by Q Entertainment's games, it's a shame that Taito doesn't have the same musical prowess of Tetsuya Mizuguchi. Maybe that's why I'm so disappointed by the game's generic beats, when a game looks like Lumines I expect it to have the same rockin' soundtrack. But alas this game doesn't, and so I played the game with the sound off and my music on.

The pictures simply don't do this game justice, Space Invaders Extreme requires you to play it before you fully understand how much of an improvement it is. I wasn't a big Space Invaders fan going in, but this game has completely won me over. At the super-low price of $20 there's no reason you shouldn't run out to the store and buy this game immediately, even if you're like me and not a big fan of the original game. Not only is this one of the PSP's best shooters, but this is one of the handheld's best games this year. Bravo Taito, hopefully there's more reboots like this in the works.
Space Invaders Extreme did the impossible - turned this long-time skeptic into a true believer. This isn't just a fun retro resurrection, it's a phenomenal action game that should be in everybody's collection. At $20 there's no reason to be without Space Invaders Extreme.