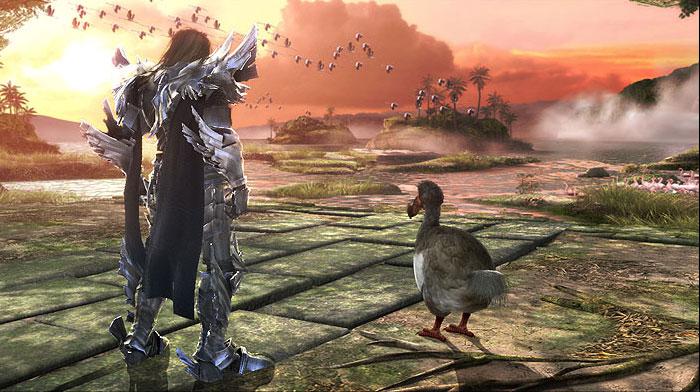 The latest version of the vaunted weapons-based fighting series delivers on almost every level, with a great variety of characters, beautiful visuals, well-imagined locales (not to mention the guys and gals), and customizable options that are some of the most accessible and detailed in the business.

As the table dealers in Vegas say, "what's your pleasure?" All your favorite old characters are here, and most of the new ones are interestingly designed ("anime-d", if you will) versions of familiar friends. Are you a mid-range guy, looking for a balance of power and speed? Here, try a little Mitsurugi. Prefer short-range speed? Go ahead, Taki it up. How about long-range ridiculous strength? Nightmare, Astaroth, Siegfried; options, options, my friends. Most of the characters are familiar, if slightly updated versions of your old favorites.

Character customization is extremely deep, if not quite endless: basing your new character on an archetype of a regular character, i.e. "I'm going to build myself a Mitsurgi", you can then choose whether you want a male or female, their various skin/hair/eye colors, etc, before selecting their armor and weapons, each of which have buffs that will complement your specific playing style. Half the fun for me in this game is the character building; I've made a He-Man, Lara Croft, Maximus from "Gladiator"…it's a well-thought-out feature that everyone can enjoy. 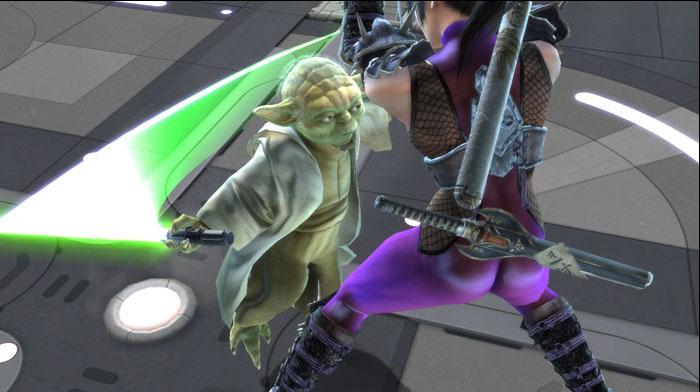 Now, I really can't move on from a discussion of characters in this game without discussing the two that everyone is talking about: "Star Wars: The Force Unleashed" star, The Apprentice, and, as mine is a 360 review, Yoda. Playing against The Apprentice is almost awful, a non-stop cheap-fest, the first time; after your initial tromping, and you will lose, if you accept that he's just a character that is extremely powerful when on an offensive roll, and adjust your strategy accordingly, well, losing repeatedly after that is a little easier. Maybe I'm not as good at this game as I used to be, but I never beat The Apprentice the first time out. I still get him eventually, but it takes a few tries. Playing as The Apprentice, however, is a different story: his special moves are easy to execute and powerful, he's fast, and packs quite a punch, and in the end doesn't seem all that well-balanced, which is swell when he's on your side, not so swell when he isn't.

Yoda. Yoda, Yoda, Yoda. His inclusion in the game was met with shock, then a little mixed derision and anticipation. Now I'm prepared to say something that I never thought would come out of my mouth: I hate Yoda. Blasphemy, I know, but he's just not that great, in fact I'd even say he's frustrating to play with. The main problem is that we're dealing with Episode II-III era Yoda (as Episode V-VI might've been a little, y'know, deathly), which we all enjoyed watching hopping around and swinging his lightsaber about, but that mechanic just doesn't work that well in the context of this game. Example: if you make two horizontal strikes in a row, Yoda does two short hops that are timed with the sweeps of his weapon, but in the whole time our little green Jedi is beginning or ending his jump, he's vulnerable, and that amount of time he spends in the air not doing something offensive is slightly longer than the amount of time spent on the attack. Basically every time Yoda makes a move, he's vulnerable for a decent period of time. And be prepared to accidentally ring yourself out a few times doing those jumpy-moves. As much as I don't enjoy playing with Yoda, I don't really know how else it could've been done better, though personally I would've brought in Luke.

The other new, anime-style characters, in my mind, just don't fit. They're not textured to look like real people, they have a cartoon look and cartoon feel that is out of place, not to mention some of the weapons: long pole with a giant ball at the end, Angol Fear? Big stick thing, Kamikirimusi? Come on. And I realize that I'm discussing a game that features a living sword and some kind of crazy ring-blade (I'm looking at you Tira), but even the unrealistic weapons are at least based on something real (giant axes, claymores, etc), put into a fantastical world, but even so the weird things are the exception, not the rule, and they still rule in this game, but this seems to be an experiment on the part of the Soulcalibur designers that just doesn't work for me.

Neither does the story, although we all know this is a fighting game and that's not what we're here for. The beginning and end-game taunts are mostly philosophical/childish ("effort doesn't equal victory, dumbass"), and the dialogue overall is that kind of awkward-Japanese-kung-fu-movie style that doesn't really make sense. The Star Wars style scrolling text intro for each character's story mode is not only poorly-written in an uninteresting way, some of it isn't even grammatically correct. I'm one of those people that likes to have well-thought out stories for even the most simplistic games, and on this count SC4 completely fails. It's the same basic "the Soulcalibur and Soul Edge have returned, we must take possession/destroy/literally do nothing with them" that the series has been running on, and for the arcade mode and most of the "story" modes, that's fine for the individual characters, that's fine. But then, at the end, you're fighting some guy who has absorbed both of them into his body, and had a hand in their creation or something, yet has for whatever reason never come up until now? I don't even know. It's a fighting game, just keep winning 'til it's over, right?

Mostly, yes, but here's the thing: I loved Soulcalibur 2's Chronicles of the Sword mode. It was an interestingly written fantasy story, we're not talking Tolkien here but at least it made sense, about a hero freeing a nation from corruption and evil at different stages and earning experience and gold or items for completing it under certain conditions, like "use only horizontal attacks" or "your opponent gains health by blocking your attacks". In SC4, we have The Tower of Lost Souls, which leaves the creative challenges, but excises the entire story. Each "floor" of the Tower, if you choose to "ascend" rather than descend" which we'll cover in a second, features 2-3 treasure chests which the player has to meet a certain condition to meet. Some of these conditions are easy, while others are face-meltingly difficult. You'll be playing it for months trying to get all the treasure chests, if you can stand the occasional, incredible, soul-crushing frustration. Descending the tower is just a matter of defeating floor after floor of bad guys without any HP-recharge, which isn't too bad with the new tag-team feature.

Following in the footsteps of such esteemed fighters as Marvel VS. Capcom, SC4 features the ability to form teams of up to 3 fighters from which you switch in and out during a fight. It pays off to learn more than one character deeply, and becomes a big part of the strategy; as tagging out a character allows him or her to recover some HP while the other character is in the fray. The other shiny new feature of the game is the Critical Finish, a one-move kill that aroused some concern about being a game-breaker, like Guilty Gear's Overdrive moves that were way to easy to pull off. In practice, Critical Finishes come up very rarely, and you have to meet extremely specific conditions, soul-gauge depleted and hitting the button(s) almost right as a piece of your opponents armor breaks off, in order to pull it off. Basically the Critical Finish is designed to be an anti-turtling strategy, and I think in that sense it is extremely effective.

SC4 also features near-flawless online play; as I am philosophically against playing online, I went to my buddy's house to give it a try, and was impressed by the lack of awareness that I was playing online. There was little to no lag, the menu system was simple to use, and was generally without the associated hassles of playing online.
Soulcalibur 4 has its flaws, awful writing and stilted dialogue, but it is also the essential fighting game of the summer, if not the entire year. Well-balanced characters and endless customization will keep you coming back for more.