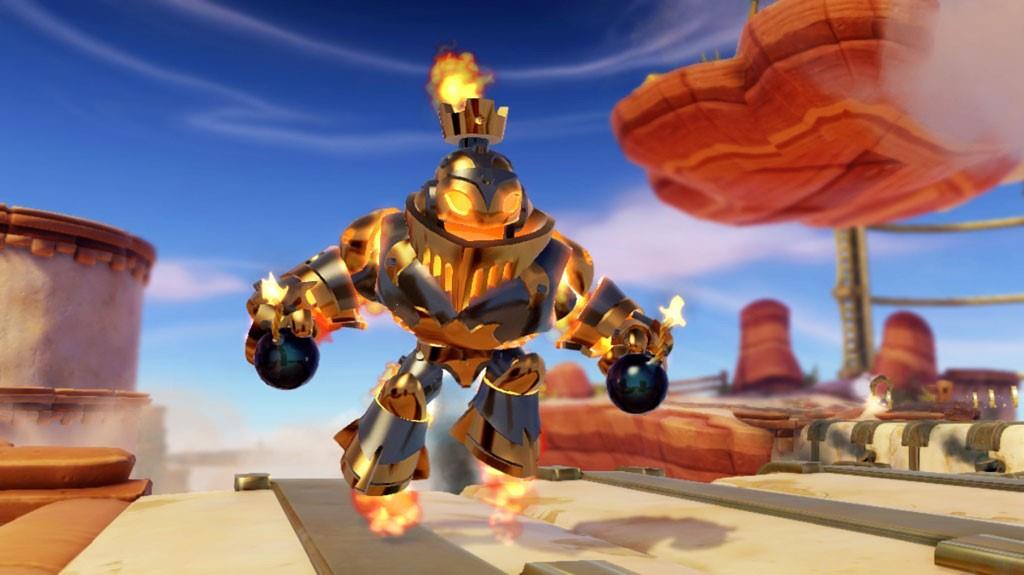 I’m truly surprised at how well Skylanders has done for Activision. My son really enjoyed the first game and the figures are pretty interesting. At E3, I caught a glimpse of Skylanders SWAP Force, which introduced figures that allowed you to switch the top halves to form new, combined figures. Now, Dan has done a good write up on the game so I won’t go into too much detail. Skylanders: Swap Force was one of the launch titles available for the PlayStation 4 and Activision sent us a copy to review.

I always considered Skylanders to be  Diablo-lite where it’s a third-person view and you have various attacks with each character. Enemies are thrown at you in bunches, but Skylanders does a good job at not making it too tough for young gamers. It’s this easy accessibility and good action combined with collectible figures that makes Skylanders such a great title for kids. SWAP Force also adds some new wrinkles into the series.

Right off the bat, you could see how much nicer the PS4 version of SWAP Force looks. With the increased graphical power of the PS4, Vicarious Visions was able to provide a much better visual experience on the console. We are talking 1080P graphics running at 60 frames per second here. The environments and characters look much smoother and the textures look sharper. Having played the first game a lot on the Xbox 360 and seeing how it is on a PS4, you can tell the nice difference in graphics. It’s not an apples to apples comparison since I don’t have SWAP Force on the 360, but you can probably deduce that the increased horsepower in the PS4 and Xbox One would lead to higher fidelity for the game.

They finally added jumping into the game, which was long overdue. Whereas in the previous games, you saw a few areas that you could have easily gotten to with this mechanic only to be stonewalled into finding a way around, SWAP Force will now let you get to those areas with a push of a button. Of course, there would be new jump puzzles and such with the addition of a jump button, but it’s one feature that’s been missing for awhile and I was happy to see they finally added this to the series. One new area that makes this option shine is when you are gliding on two rails. You’re able to jump between the two, dodging obstacles and shooting at enemies with a more heightened level of excitement. Jumping can also lead to new areas of frustration as some areas do require more precise timing to get through. One example is a whirlpool where I had to jump on these objects that float around in order for me to get to the other side. It took a few tries, but failing to get past it led me to an area where I would have to climb out of in order to get back to where I could try again. It took a small, but annoying, amount of time to get back to the start, which led to some frustration. Still, I am glad to see the inclusion as it does open up new possibilities. 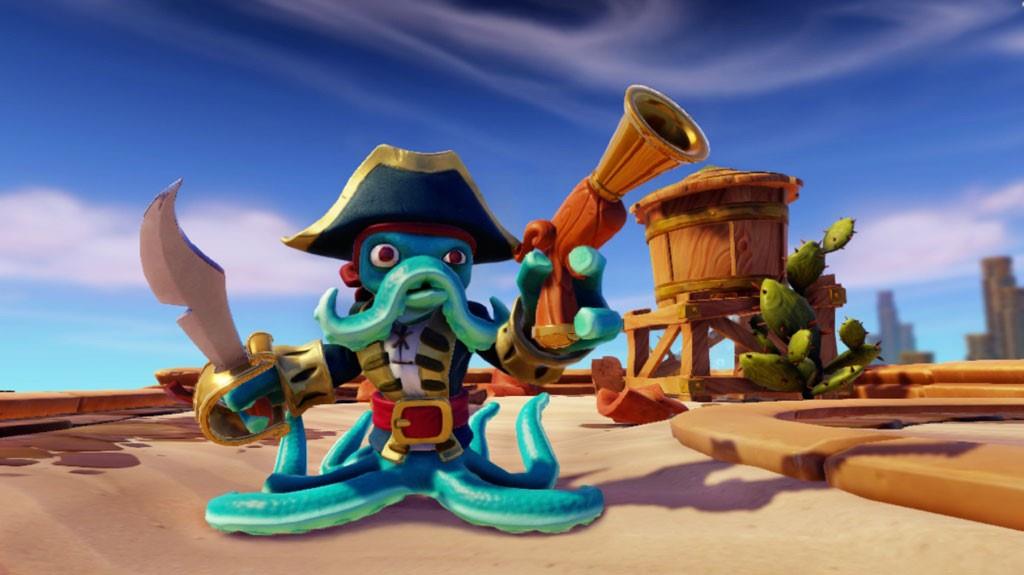 Also, all money in the game isn’t individualized anymore. When playing co-op, money is shared between the two, so this should help stop fights between siblings who hog the treasure. I always hated fighting with others when trying to get loot, but this way makes it less of a competition and helps you concentrate on the game itself more.

With all that newfound money, a nice addition is the ability to upgrade your character with stations scattered about in the level. Before, you had to wait until you finished a level to increase your character’s abilities. Now, if you find one in the level, you can do it right there and reap the rewards of your treasure gathering sooner if you wish.

Levels have increased in size making it much more exploratory in nature. They are still mostly straightforward on how to get through them with the occasional hidden area or two if you look hard enough. There’s some good variety as well, even taking advantage of the new movement possibilities in the SWAP Force characters. For example, there’s a vertical climbing area that you must use the bottom of Wash Buckler to get past as his tentacles allows you to scale the wall. Even when you are done with the main story, there’s a central hub area that lets you continue playing and unlocking new items, which adds a ton more hours to the gameplay. The main game took about seven hours to finish with my son, but with the hub there’s a great deal more to play through. 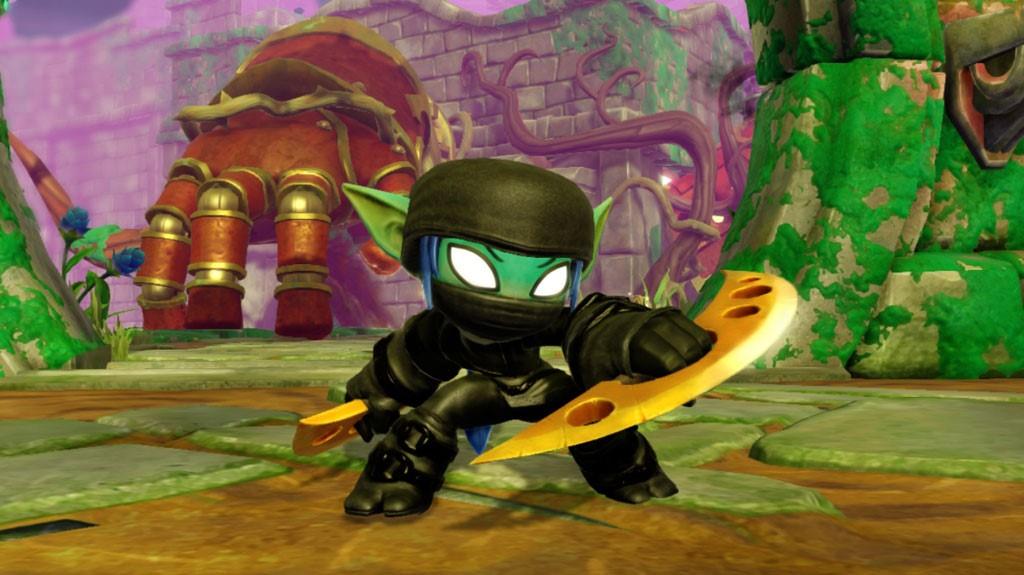 One of the things that’s always been solid has been the voice acting in the game. Patrick Warburton returns as Flynn, who helped you in the previous games. From the main characters to the secondary characters you meet, everyone does a great job with their roles and it really helps set the mood that Skylanders SWAP Force exhibits.

The starter pack that Activision came with two SWAP Force characters in Blast Zone and Wash Buckler. Stealth Elf, one from the original game, also comes in the pack as well. Of course, the game is backwards compatible with the two previous Skylanders games so figures picked up for Skylanders or Skylanders Giants will work with SWAP Force too.

The starter pack also includes a new Portal of Power that plugs into the PS4 via the USB port. New technology in place means that old Portals won’t work, hence all console starter pack comes with a Portal.

If you have a choice of platforms to choose from, pick up the PS4 version as it definitely shines. Skylanders SWAP Force is a nice follow up and adds a nice new dimension to the series with swappable characters and jumping. It’s also great that old characters aren’t rendered useless and you can keep using them in new games. Yes, you’re going to invest in a lot of money on these characters as they aren’t cheap, but they are modeled really well both on and off the screen and kids can take them to their friend’s house and use them, upgrades and all. My son absolutely loved the game and I had a fun time playing with him as well.

The swappable characters add a nice new mechanic and jumping is finally in. The PlayStation 4 version looks solid with better textures and resolution. It's fun for the whole family, but can be an expensive investment if your kid wants to unlock every level in the game.