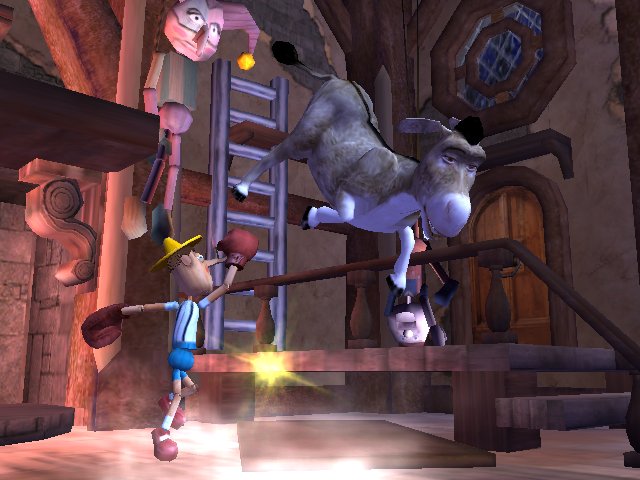 It seems that there is no end to the number of games that can be affiliated with a successful movie, but there very much does seem to be a "milk it until its dry" mentality.  These games are nearly always the same-old same-old, with nothing to really differentiate them from the crowd other than a newly licensed collection of characters.  Using this model, publishers can release nearly identical games with no more effort than adding new character models and replacing some audio.

This little diatribe brings us to the topic at hand: Activisions Shrek Super Slam, a run-of-the-mill fighter that will hopefully be the final teat on Dreamworks Shrek franchise cash cow.  Its not that Super Slam is a bad game, its just that theres nothing really innovative about it.  If you already have a fighting game that you like, you wont need this one.  If you dont, youd be better advised to take a look at Microsofts Kung Fu Chaos, which is the game my kids wanted to play instead every time I asked them to play Super Slam.  I dont want to lapse into a review of Kung Fu Chaos, but I will point out the most obvious difference between the two: in Super Slam, you fight in a static (albeit destructible) arena, whereas in Kung Fu Chaos, the arena "moves" as the fight progresses.  Again, this is not to say that the arenas in Super Slam are bad.  They are, in fact, pretty nice looking, and they do have some fun elements that arise from the destructibility.  They also have plenty of loose objects such as tables and large vases that can be picked up and used as weapons.  But these things are de rigeur in any new fighter, and therefore do not sufficiently differentiate Super Slam from the multitude of competing titles.

Still, if your young uns have a real thing for Shrek titles, they probably wont be too disappointed in Super Slam.  The problem is, most kids that are that hung up on Shrek are under the age of 10, and Super Slam proudly wears an ESRB rating of E 10+.  I wouldnt get too hung up on that, though, as I didnt see anything in the game that I wouldnt allow a younger kid to see.  It is the rare 8 year old indeed that isnt already inured to the dangers of "cartoon violence."  And this isnt Itchy & Scratchy level violence were talking about here; its more of the Tom & Jerry type.  Just make sure youre ok with them seeing fart humor, though.  But if you let them see the Shrek movie(s), youve already made that decision, havent you?

There are some creative elements to Super Slam, in that the animated scenes before each chapter are pretty clever.  The voices are reasonably accurate facsimiles to the original voice talent, and they do have some clever lines.  I was unable to detect any continuity between the chapters as I progressed through them, so theyre really more accurately described as vignettes.  That said, the cut scenes will have a shelf life of exactly one viewing, so they cannot really be considered as a long-term draw.  To encourage replay value, and with a street price of $40 you should insist upon that, you need good game play.

Thats a bit of a mixed bag in Super Slam.  I found the controls to be somewhat mushy and unresponsive, so battles quickly degenerated into exercises in button mashing.  The interactivity of the arenas helped keep the excitement level somewhere above jury duty, but it was nowhere near as compelling as the aforementioned Kung Fu Chaos.  The camera was well positioned for the most part, although the size of some of the arenas required that it zoom out far enough to include all of the characters, and at times that made it difficult to get a close enough view of what was going on to continue the fight.

There are plenty of standard and character-specific moves to learn, and if you can master the timing of the controls you can really own your opponent.  The animations are smooth and fluid, and I never felt like the game was bogging down.  As you progress though the game, you unlock new costumes for the characters.  Something about seeing the Gingerbread man dressed in hip-hop wear, complete with neck Bling and his trusty pal Gingerbread dog seemed a little off, though.

In summation, there isnt much new or innovative about Shrek Super Slam, but theres nothing inherently wrong with it, either.  This one will go over well with young Shrek fans, but is unlikely to elicit any long-term loyalty in that audience.

Shreak Super Slam is a run-of-the-mill fighting game that will only appeal to kids that simply can't get enough of the Shrek franchise, and even they will find that Super Slam doesn't offer much by way of long-term playability.