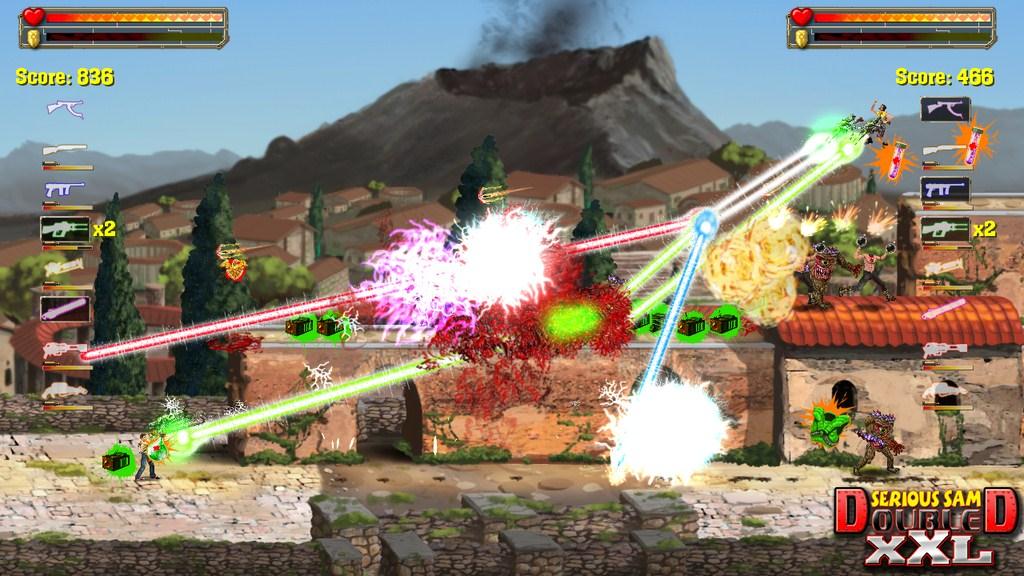 Written by Mike Mahardy on 2/19/2013 for 360
More On: Serious Sam DD XXL
Mommy’s Best Games tried their hand at the Serious Sam series with Double D in 2011. The installment featured 2D side scrolling, frantic firefights, and the trademark humor that is hardly ever understandable, yet somehow always funny. Well, they’re back with Serious Sam DD XXL. And if the name tells you anything, it’s that you’ll be getting much more bang for your buck this time around.

It would be easy to pass off DD XXL as an expansion; it would also be wrong. DD XXL has over 30 new levels, along with new weapon upgrades and abilities that not only add to the original Double D gameplay, but alter it at every turn.

Chief among these additions, and arguably the most enticing one, is cooperative play. If you’ve played Serious Sam Double D, you’ll immediately know why this is ludicrous: killing giant, robotic dinosaurs and a slew of headless kamikaze soldiers is more mayhem than anyone could ask for, but adding another player to the mix? Again, I’ll say it. Ludicrous. 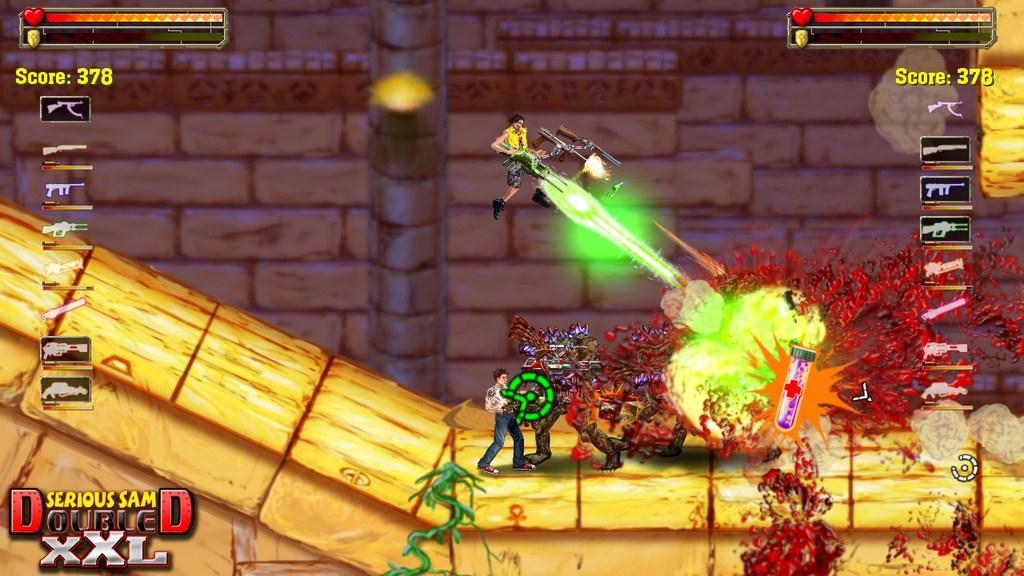 Playing side by side with a friend on the same screen –– the only co-op experience allowed –– does slow the frame rate at Defcon 1, when there are more explosions on screen than not, but it hardly ever hinders the flow of shooting, jumping, and killing for more than a couple seconds. There is no friendly fire, and players can’t run into each other, so adding someone else just ensures that your brain will understand even less of what is happening on-screen.

Speaking of unfathomable concepts, the aforementioned humor of Serious Sam Double D is back with DD XXL, in spades. If you think you’ve seen it all once you pick a few flying chimps with axes for hands out of the sky, wait until you’re staring down the gaping maw of the terrifyingly hilarious Vuvuzelators –– kamikaze pancake stakes dripping with syrup and using the destructive power of ear drum-damaging vuvuzelas. If you’ve ever watched a World Cup match, you know what these horn-like instruments look like –– just imagine them exploding. 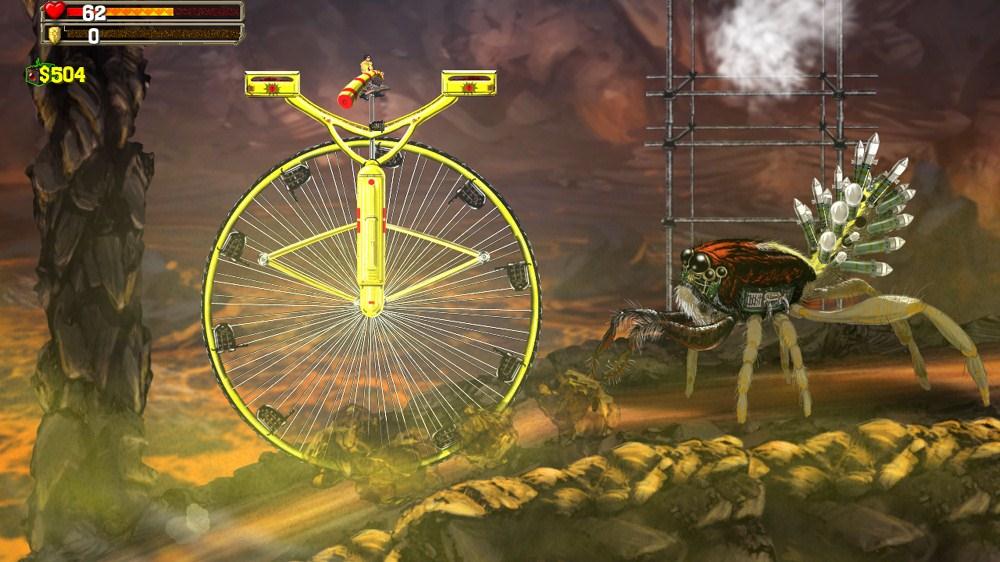 As with Double D, the weapons are core of the gameplay in DD XXL. There are platforming and aiming involved –– the latter can be a little too sensitive at times when when you’re setting your sights on a specific enemy –– but most of the time, you’ll just be focused on shooting anything that moves.

Weapon upgrades ensure that this won’t become repetitive, though. Not only does each new weapon upgrade change the way you approach each firefight, but encourages exploration as well. Hard-to-reach areas and translucent walls permeate every level, and searching for them is more fun than it sounds.

The Jump Pad functions essentially as a spring box, launching you to new heights and even allowing wall jumps a la Mario 64. There are numerous challenge rooms to unlock by exploring. These side missions task you with completing tasks in a finite amount of time or surviving until the enemies are depleted. These challenges, along with ammo and health dumps, are great rewards for exploration, but the weapon upgrades are the real light at the end of the insanity-ridden tunnel. 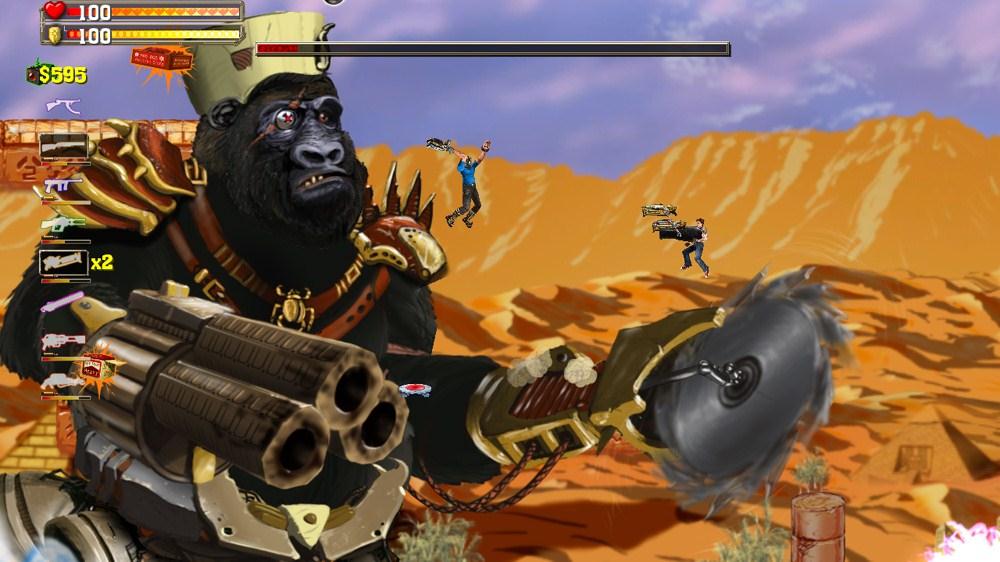 The weapon upgrades do their parts to open up new methods of fighting, but the Gunstacker ability changes everything. Should you find enough improvements to your “gunstack,” you’ll be able to stack six weapons on top of each other. There are no other rules to this; I spent the first two levels swapping out Tommy guns for shotguns, grenade launchers for chainsaws, and new weapon upgrades in between. One gunstack was enough to keep me on my toes and my strategy dynamic, but then I had enough upgrades to start another column.

This ensured that every checkpoint was another chance to get lost in the possibilities of gunstack combinations. Toward the end of my first single player playthrough, I had one combination designed specifically for bosses, a second for close quarters, and a third for everything else. Should I find every upgrade –– and trust me, I want to –– I’ll have eight of these towering death dealers.

Head-to-head arenas pit you against your friend, complete with any abilities and upgrades you might have, and provide a respite from the chaotic cooperative campaign. Leaderboards function as a means to bragging rights –– as with any other game they’re included in –– but the real fun will be plowing through a horde of horrifyingly creative enemies with obnoxious weapons.