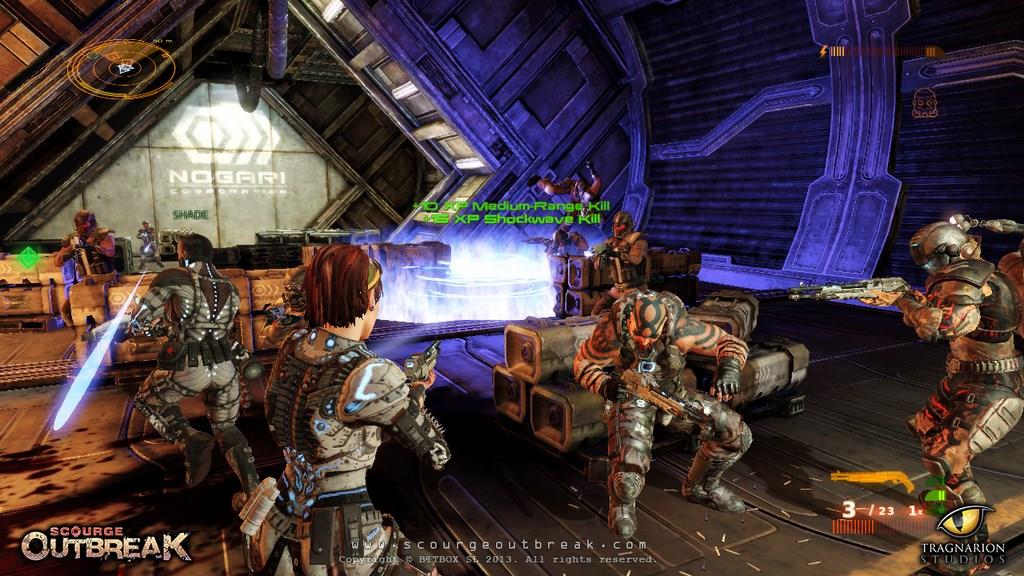 Written by James Russell on 8/12/2013 for 360
More On: Scourge: Outbreak
“Brown shooters” of the Gears of War and Call of Duty class are easy sellers in the gaming market, but they can get pretty bland and repetitive. Shoot this, move on to the next checkpoint, use the obvious chest-high walls for cover, rinse and repeat; these are the basic elements of this sub-genre that has emerged over the past decade.  Tragnarion’s Scourge Outbreak, which is a “heavily upgraded and improved version” of the 2010 PC-only shooter The Scourge Project, has some great moments but ultimately does little else to break free from being just another “brown shooter”.

You play as one of the four brutes of the Echo Squad tasked by the Tarn Initiative with rescuing a scientist and double-agent by the name of Dr. Reisbeck from the evil Nogari Corporation. You also have to retrieve new energy source material that the corporation had extracted from a meteorite which they have used to develop their Ambrosia technology. This technology gives the users special powers but it also releases crab-like aliens and plagues on the planet, so with the good comes some bad I guess.

Scourge: Outbreak does have its moments, with its Unreal-engine-powered visuals. with certain areas that are somewhat destructible as well as some nice environments that you can run through Gears-of-War-style. But that’s about where it ends for me as the rest falls into the same old formula for your average brown-beige-grey shooter. Even the environments and textures repeat themselves. Ultimately, it offers nothing new to the genre and comes off as very copy-and-paste with a plot and gameplay mirroring other past sci-fi shooters. The controls feel like Gears of War, for example, while the looks of the weapons and the ranking system seem like discounted Mass Effect ranking and weapons customization. Not to mention the power suits the Echo Team wear scream Crysis. 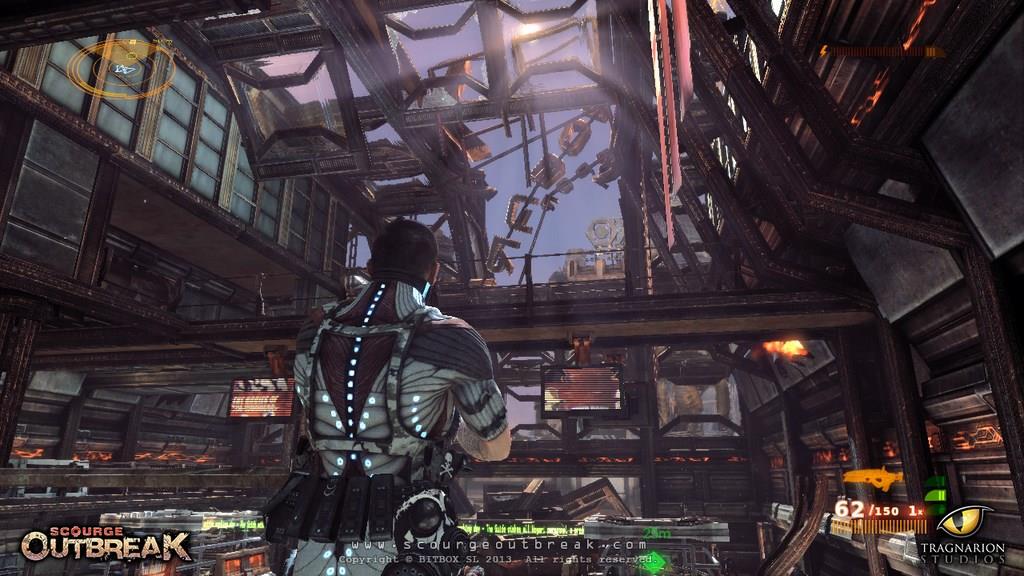 As for the gameplay, it never evolves past anything more than the routine of going to room, taking cover from a chest-high wall, killing the idiotic enemy AI, and then moving on to do the same thing again. Even with the these basic elements you’ll come across issues. Moving between cover points isn’t exactly as smooth as Gears and moving period feels very slow-going. Although the enemy AI may be thick, your allies at least have a better sense of what the heck to do, like heal you when you’re down or hacking a terminal or attacking a certain enemy. Sometimes when you give an order, your ally may not be able to put two and two together and you’ll have to give the order again. If any one of them dies then you’ll be suffering from the game’s poor checkpoints and have to start the encounter all over again. This is where it helps a great deal to play co-op with at least one other person, if only to just maintain your stress level.

Outbreak does little to excite but it can be entertaining at times if you can round up some friends to play along. The controls are rough and sometimes unresponsive and the weapons don’t feel like they pack any sort of punch. The multiplayer however, on the other hand, does provide some enjoyable sessions.  If you can grab yourself some friends to play with the issues seem much more tolerable, just don’t expect anything new in this area. As long as you are happy with an experience that consists of your usual deathmatch, team deathmatch and capture the flag, you might find this worth your time and money.
Scourge: Outbreak is a simple, by-the-books brown shooter with ideas taken from a few of its more superior brethren. It is light entertainment is brought down by poor controls and its unoriginality.

I may have been a bit deprived when it came to gaming as a child before my first Xbox and PS2 (the most I ever played was my beloved Pokemon for the Game Boy, the Legend of Zelda and a lot of Mario Party 2), but at the dawn of the new millennium I discovered my love for gaming which would soon stock my basement with countless titles from various systems. Little did I know, however, that I would forever be playing catch-up when it comes to playing as many games as I can, or at least as many games as I should experience. But that still leaves so much to explore. View Profile