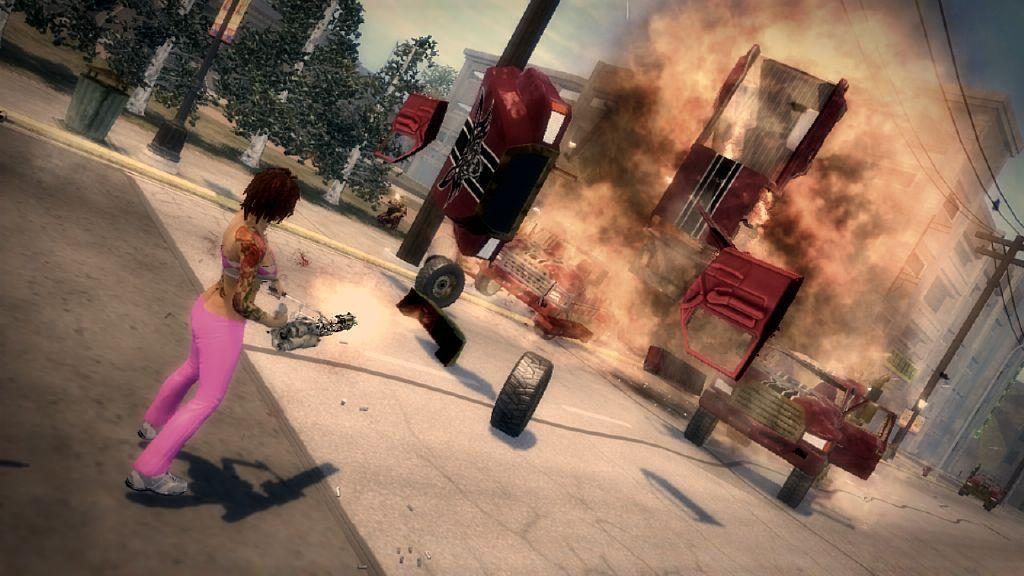 Written by Randy Kalista on 10/14/2008 for 360
More On: Saints Row 2
It’s simple enough to see from the outset that Saints Row 2 was never going to tackle the trials and tribulations of gangland America with any amount of gravity. And even though this is my first serious-minded foray into the Saints Row series (Cyril Lachel nailed the first Saints Row review, while I’m flying in with a second opinion on this one), the pimp limps, icy wrists, and prison tats are nothing more than vehicles for turning the fictional city of Stilwater into a virtual shooting range. And with as many senseless in-game murders as I’ve committed, every face, every uniform, and every gang color (even theStilwater Police Department boys in blue) has begun to take on the airy resonance and papery weight of a firing range target.

I’ve grown desensitized with every pull of the trigger. Every bullet, every shotgun shell, and every rocket-propelled grenade is the currency traded freely among the violence-is-a-way-of-life citizens. And in case you were wondering about the exchange rate in Stilwater: Life is cheap. Every enemy is nothing more than a red blip on a minimap, every innocent bystander is likewise nothing more than a hood ornament in a race, or a body shield in a firefight. Every person strolling on the sidewalk is fodder for my fender. Every vehicle in the road is my free ticket to ride. And if they shoot at me, I shoot at them. That’s as complicated as the politics ever run in Saints Row. I’m not saying this to strong arm a layer of existential thought into things. In fact, it works to the detriment of Saints Row that the killing grows dull early on. 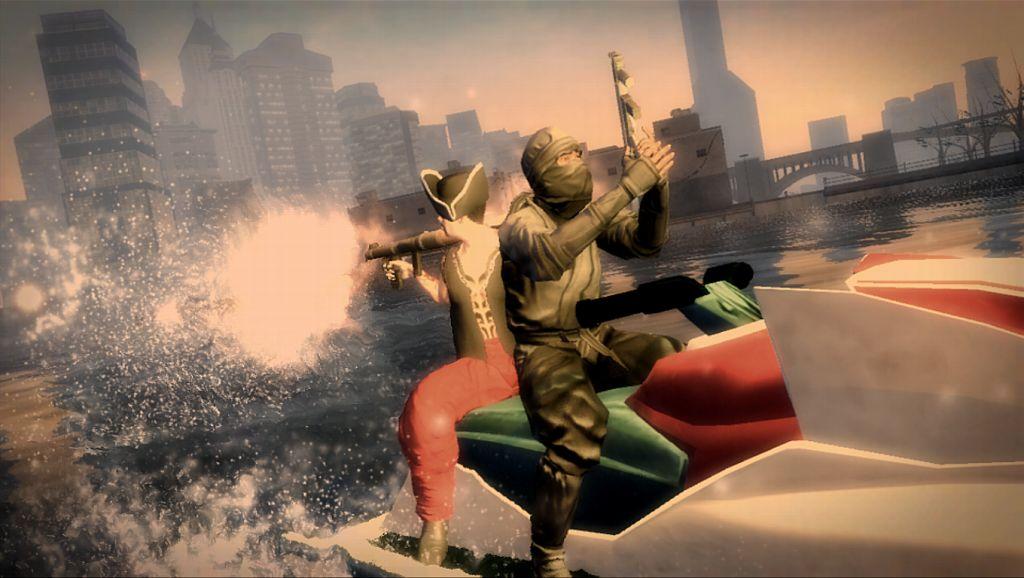 But then, as you spend some hours within Stilwater’s Wild West zip code, an internal transformation takes place that lets you accept the fact that the violence stacked upon violence can eventually build itself into something fun again. The growth and maturity exhibited in Grand Theft Auto IV – while still keeping that unbeatable Rockstar sense of humor firing on all pistons – is exhibited virtually nowhere in Saints Row 2. Even without having played the original Saints Row beyond a 5-day rental, it’s easy to discern just how much of Stilwater has been turned into a recycling plant.

Sure, the small geographic location of Saints Row on the Stilwater map has been replaced by a lit-up set of power-tie skyscrapers, but other than that, Stilwater is business as usual in every other way. After a full-bodied level of character customization – a screen I spent much time and contemplation on, marveling at the cross-dressing options that the game doesn’t even bat an eye towards – I’m thrust haphazardly into the kill-‘em-all Stilwater sandbox. It begins with an Alcatraz-styled prison break, where, with the guidance of a genial nephew-like inmate, we run and gun our way out. The objective: Pretty much kill everyone. I try to spare a few lives, avoiding spotlights and security guards, but the body count soars regardless. No cover. No deft maneuvering. Just trailblazing Lara Croft-style with dual-wielded pistols, which looks to be safely enough what developer Volition intended from the get-go. 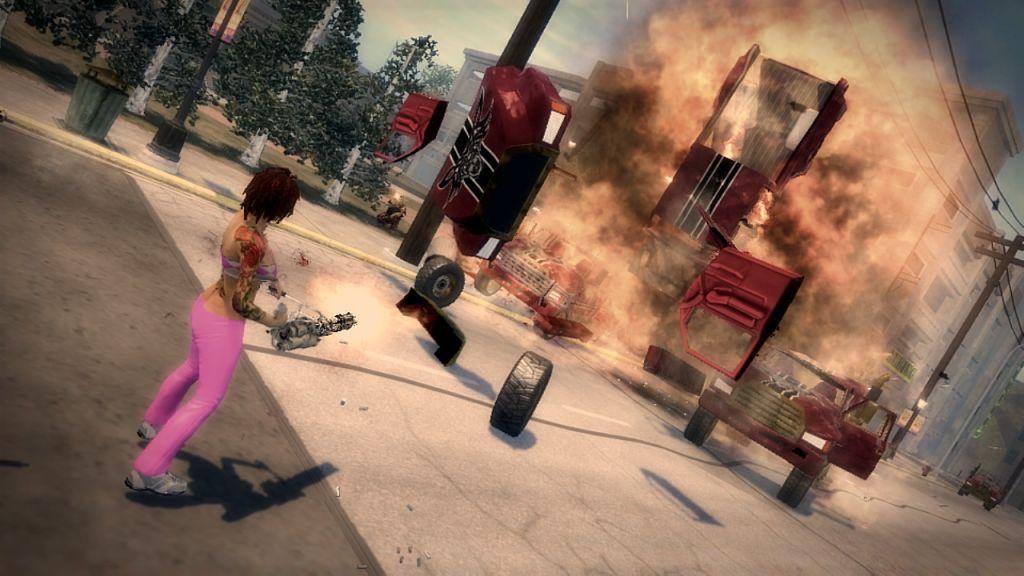 But at every opportunity, Saints Row 2 proves that it’s still playing the little brother to its older GTA sibling. Beyond the character customization screen, the details dull with the chalky cityscape. Clothing stores have limited styles in stock. The soundtrack, now panning out to a dozen different genres, won’t satiate anyone’s musical tastes beyond the excellent but overly-obvious choices on the ‘80s station (rap radio is particularly weak-kneed and scatter-brained). Vehicle traffic runs at a dull roar in too many places, while pedestrian traffic has people traipsing through dead zones like it was the Boardwalk. And even though I don’t demand that Volition’s developers sport a Masters degree in Civil Engineering, I’d appreciate a city that makes more sense in its overall design. The feeling of an organic, living city is drowned in Stilwater’s often nonsensical zoning and playland styling, which extends into its often baffling interior floor plans as well. Even the dirt trails signifying the “country” run up and down a stiff ridge of topography mistakable for a model train prop.I say all that to say this: The city’s makeup is as much of a facade as the violence is. Although this shouldn’t be misconstrued as “glorified” violence. It’s a Looney Tunes level of violence skinned with a “gangsta, gangsta” attitude and pockmarked with a socially-stereotyped veneer. And, in the purest sense of senseless gang violence, it has everything to do with the rag hanging out of your back pocket, and nothing to do with the color of your skin. Race and gender simply isn’t a motivating factor. Only an individual’s affiliation is. Who knew that America’s idealized melting pot would be stirred in the litter-strewn streets of Saints Row? Besides, this is the kind of violence that can only appall you if you over-think it. And if Saints Row 2 teaches you nothing else, it’s to not over-think things.

The act of not over-thinking things cleanses the palette for the myriad of confoundingly-addictive but less-than-meaningful interactions. After the intro prison break (where I also brought down half a dozen police choppers) and, shortly thereafter, a courthouse break (which played out like the Police Trainer arcade games, this time with cops lining the corridors, ripe for the picking), over-the-top appears to be the only way out of any and every situation. Subtlety? Out the window. Nuance? Saints Row can’t even pronounce it. Explosions and gunfire can only carry the drama just so far. But, unapologetically in Stilwater, money talks and bullets walk. And the sooner you figure that out, the sooner you can start having fun in the game. 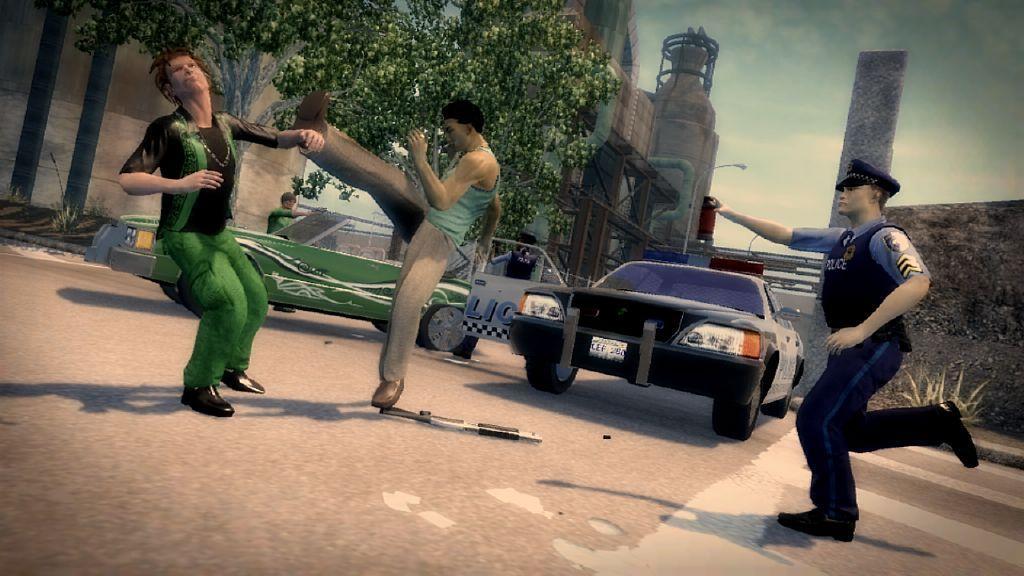 That’s correct. Saints Row 2, after all this finger-pointing of what it’s not, is indeed fun. Running the gamut of mini-games through the town is ceaselessly entertaining. You’ll ride shotgun in a septic truck, lowering property values by hosing down homes with crap. Literally. You’ll roll through neighborhoods, scoping for a particular shopping list of cars to bring back to the chop shop, or drawing little red beads onto the foreheads of marks checked off your hitman list. You’ll kidnap abused whores away from abusive pimps. You’ll get bored and pull some drive-bys. You’ll race on the streets, below the streets, and in the water. You’ll collect CDs, find secret areas, jump ramps, and spray paint the town with the Saints’ tag. You’ll run ambulance missions, fire truck missions, escort service missions, taxi driver missions, and tow truck missions. You’ll play blackjack and poker, commit store hold-ups, take people hostage, mug folks on the street, go streaking past those same people you just mugged, and warm up for Valve’s Left 4 Dead by playing some “Zombie Uprising” back at the crib. Even “Insurance Fraud” makes a fantastic comeback from the first Saints Row, as you throw yourself into oncoming traffic in a slightly subdued – but more purposeful – game of Pain.

Another layer to all of this is that you don’t necessarily have to go it alone: Drop-in/drop-out co-op is an option if you want to run the streets with a buddy or, of course, a complete stranger. In portions where I’d otherwise lose intent and focus, Cyril’s presence in my gameworld kept me motivated to persist with objectives (rather than waste my time shopping in Bling Bling or On The Rag; and yes, the store names are that classy).

All of which is in the name of playing gangster Monopoly across the city. Your job, from the beginning, is to put the Saints back on the map. If this objective sounds uncannily familiar, you’re right. The perpetual existence of a Saint is to color in the map with your particular color. You’ll expand the empire by running missions against the Triad-styled Ronin, the big-trucks-and-tattoos Brotherhood, and the dreadlocked and voodoo-wielding Sons of Samedi. Plus, the major Wizard of Oz in this virtual land-grab is a charismatic white guy sitting high in the Ultor Tower, a glowing highrise sticking out like a big middle finger against the horizon. Stop holding your breath for the unexpected. It’ll all play out exactly as you predict, though there are smaller touches that bring out the sparkle in the storyline: The heir to the Ronin throne dies without resolving his daddy-doesn’t-love-me issues; the Samedi’s second-in-command coldly calculates your death, all while submitting to the entropic beauty of his crumbling empire; and The Brotherhood’s leader initially seeks to round-up your activities and corner you with the weak end of an 80/20 take on the profits, couching the insult in the spirit of cooperation. 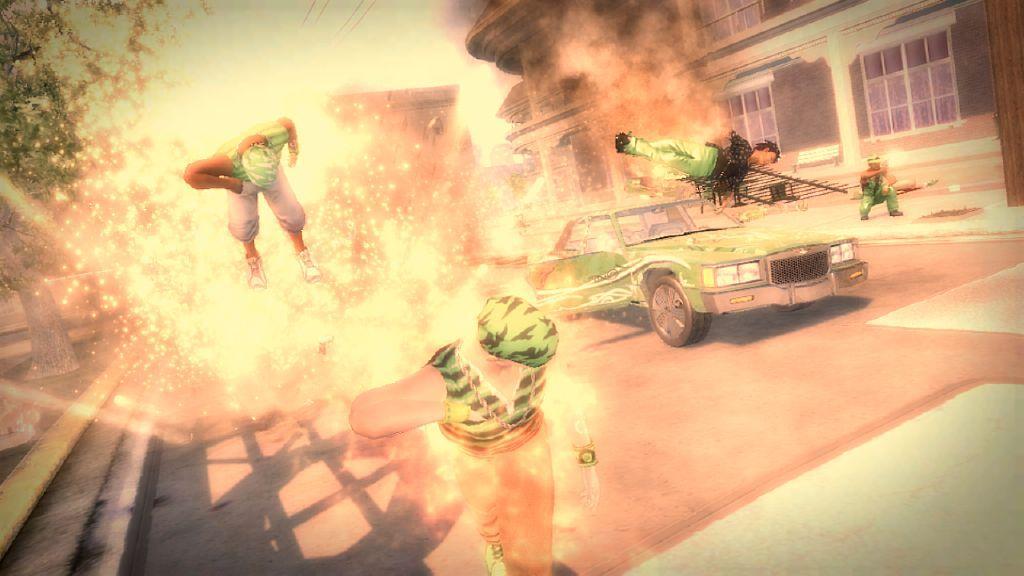 All of these narrative knife cuts bleed just enough life into the gameplay to keep your motivations flowing. But after all’s said and done, there’s no singular powerful experience for you to store away in your Gaming’s Greatest Moments memory bank. And so, in that respect, Saints Row 2 aims to be nothing more or less than a popcorn flick, and succeeds winningly as nothing more or less than a popcorn flick. The biggest slap in the face comes from the principle idea that this game – part two – should’ve been arguably simmered down as downloadable content for part one, rather than billed as any full-on sequel, which it’s clearly not.
This is by no means a sophomore jinx, but without fully keeping stride with its GTA role model, and without fully stepping out on its own from under that shadow, Saints Row has found itself stuck in an awkward, uncertain tween stage of the series’ life. Saints Row has to mature, or make a more convincing argument that it’s never going to – and never has to – grow up.