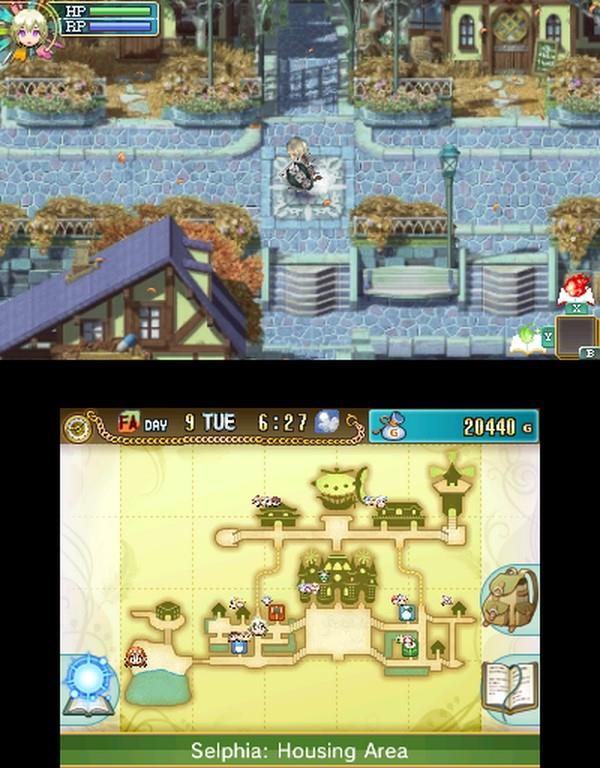 I don't typically equate farming with having a good time in a video game, so imagine my disdain when Rune Factory 4 came in for review. Then imagine my surprise when I find a much deeper and rewarding experience than Nintendo's own Animal Crossing: New Leaf that was released just a few months prior. I'll admit after giving up the Harvest Moon series nearly a decade ago, Rune Factory 4 might be the game that pulls me back in to the series, provided I can get past some of these ridiculously cliché characters and tropes.

Rune Factory 4 starts with your main character aboard an airship, bound for an unknown destination, with a parcel in hand that some ne'er do wells want to get their hands on. A short tussle doesn't quite go your way and now you're an amnesiac (of course), and you're falling from the sky. Thankfully the town of Selphia and their dragon guardian Ventuswill are there to break your fall. Apparently you were expected, though not in this fashion, as Ventuswill has you pegged for the prince (or princess should you choose) that was meant to arrive. How odd though that a prince/princess would be prime material for working the fields of Selphia, but at least everyone seems to be helpful in the town and receptive to your new responsibilities. But there's something a little more sinister at play here, and by following the at times drip-fed storyline, you'll wind up being something a little more important than the groundskeeper of Selphia. 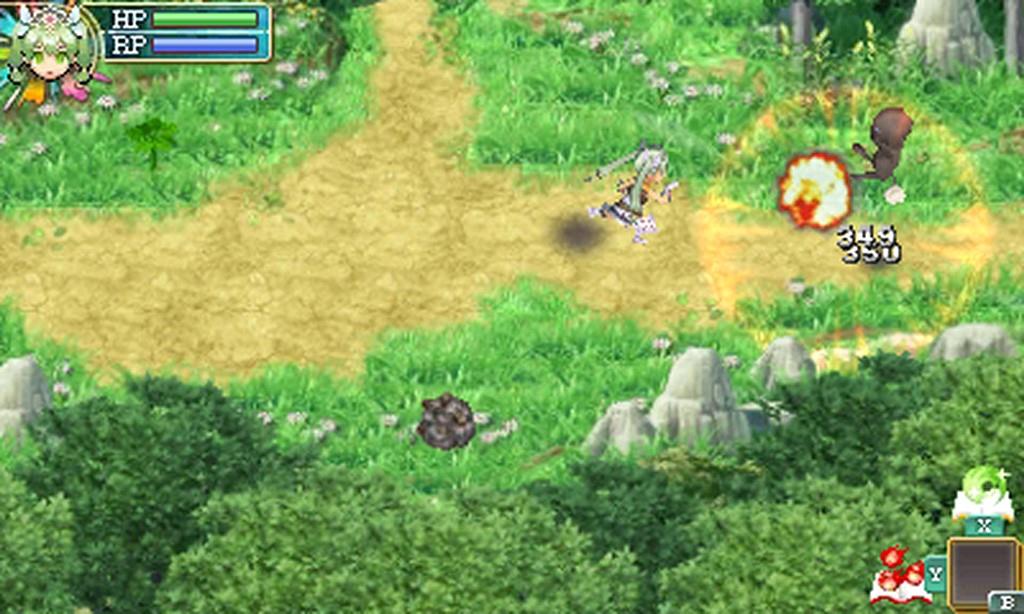 So what does being a farmer in Rune Factory 4 entail? Quite a lot actually. There are a number of roads you can take after the initial introduction to the game, and at times it feels like there is almost too much stuff to do in any given day. First you've got to tend to the crops, and then maybe go make some food with said crops, or do you go sell them to buy seeds for more plants? And then you've got to make sure you're keeping up with the people in town (who are presented in the most generically animated cut-scenes I've ever seen) and make sure you're giving them gifts so that they stay happy. Some of these people in town feel like such cookie-cutter anime characters that it's almost insulting. You've got the brave knight who secretly loves sweet things and is afraid of ghosts, the cheerful bath house attendant with her older sister, but the most jarring member of the town is Porcoline, the town chef who is a fairly effeminate male but grossly overweight, combined with the performance of his voice actor, he stands out as the sole exception to the rest of the town's banality.

Then there are the requests from the townspeople that you've got to fulfill, but not before you go searching for materials so you can build yourself a forge, or maybe a monster barn, or perhaps some cutlery for cooking? Is it someone's birthday? Or is there an event going on in town, like the fishing challenge or the cook-off? There is pretty much always something happening within the town of Selphia that can eat an entire day in game time (1 game hour to 1 minute passing in real time). Then there's the actual storyline to follow, which is where the game takes a noticeable turn for the difficult.

So when you decide to not be totally tied down to the farmer lifestyle, you can go out and explore the areas around Selphia which is full of monsters that will have no problem mowing you down early on. The leveling up system in Rune Factory 4 doesn't adhere to the norms of 'Get XP, stuff happens.' Instead it's similar to that of Final Fantasy 2, where the more you perform an action, the stronger it gets. The same rule applies to gaining hit points, get hit, get points, and rune points which are used to perform actions like cooking, weapon skills, or magic. It pays to play so to speak, but at times it can feel a little overly 'grind-y' making for dull patches of gameplay where you're just running around taking damage or plowing through enemies and fields. The biggest problem here is having little indication to tell you where you should be physically before entering certain areas. And this in turn can lead to quick deaths which also means taking a good chunk of your cash to cover the medical bills when you pass out. Yes just like in real life the threat of crippling medical debt is always looming over your head in Rune Factory 4, so save early and save often, which has me wondering, why is there no easy way to get back to the main menu to load my data? You have to restart the game completely to get to a data loading screen, which is a minor annoyance. 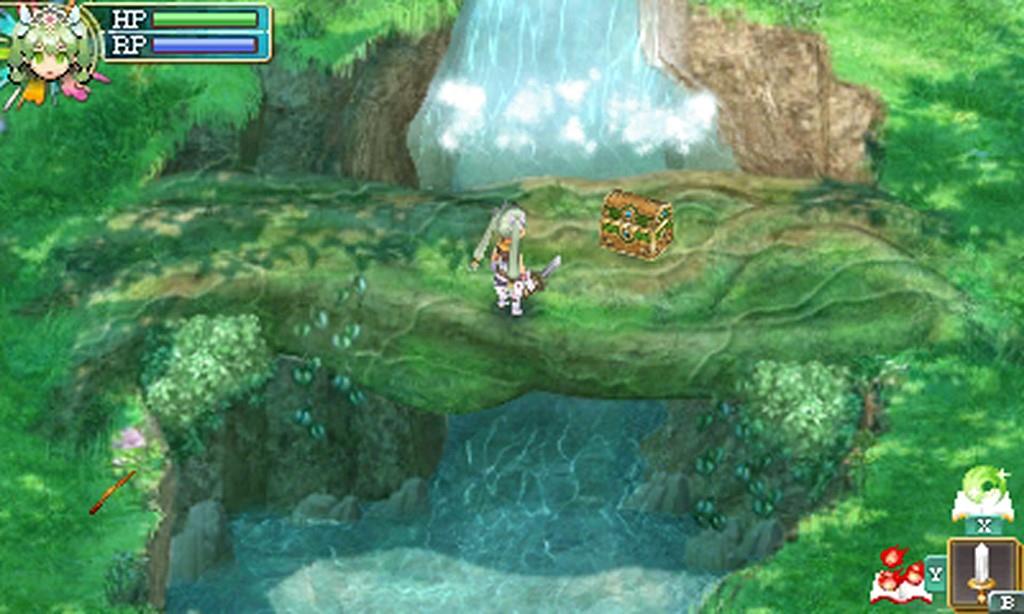 Combat isn't much to write home about, just your typical top-down classic Zelda inspired action-adventure fare, with all attacks mapped to the B button and combos that are performed by hitting the button until things die, and spells mapped to X and Y respectively. There is a dash which is on the R button and is quite useful for getting out of some messy situations, and can be combined with normal attacks once a weapon has been leveled up enough. Hit boxes can be a little weird against some of the bosses, causing them to hit you when it doesn't look like they are, and the same can be said for attacks, which don't always seem to have the range you think they do. It's not enough to be totally detrimental to the game, but it does happen from time to time.

From a visual standpoint this game isn't looking too hot either. The 3D models are alright, but the world surrounding them looks a bit drab, with lower resolution sprites making up a majority of the locales you'll be visiting. The game is certainly bright and colorful, but for some reason it is visually jarring to see 3D characters running around on a 2D plane, and everything just looks flat. And the 3D effects aren't all that impressive either, relegated to small weather effects, it's almost hard to tell whether or not I have the 3D slider turned on. In terms of audio, the game is mostly forgettable in this regard, and I don't know if it was just me, but I was tuned out of the music to the point that I had to turn up the volume just to confirm whether or not there was music in the game. The voice acting features a lot of repeated lines, which thankfully aren't grating on the ears.

While Rune Factory 4 does have a lot of stuff to do, it also falls in to that Animal Crossing grind where I'd check in for a little bit, run a few errands and then put it down for a while. I felt that there was no sense of urgency to get the story done, but once things got rolling I was definitely pulled in, even if on more than one occasion I was stymied by enemies that were way more powerful than me. Thankfully there's a lot more post-game content too, like attempting to marry one of the townspeople. If there is one thing this game isn't short on, it's things to do.

Like I said before, at first I wasn't totally on board with Rune Factory 4, but after spending more time with it than Pokemon X lately I've warmed up to it quite a bit. It's not the prettiest game out there, but it has some solid gameplay mechanics and the amount of things to do is never in short supply. In fact, sorry citizens of Odessa, you're going to have to start picking your own weeds. The town of Selphia needs me, and they've got a lot more stuff going on than visiting islands to catch bugs.

Never short on content, Rune Factory 4 is full of things to do that'll keep players engrossed for a long while.