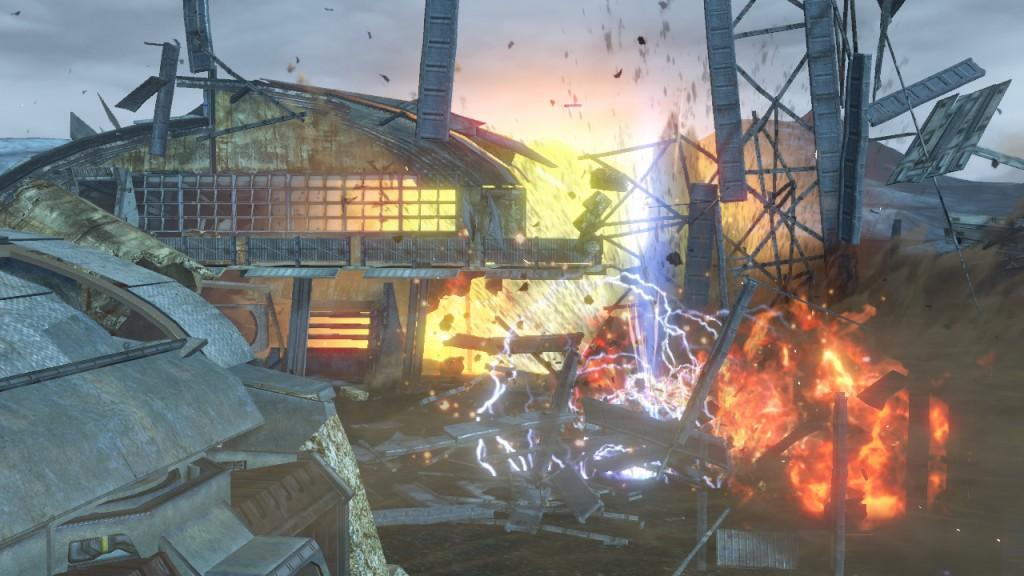 Written by Sean Colleli on 5/18/2009 for PC   PS3   360
More On: Red Faction: Guerrilla
The friendly folk at THQ were nice enough to invite me to their multiplayer demo for Red Faction Guerilla last week. I couldn’t refuse such an offer, so I headed to San Francisco to go hands-on with the third installment of Red Faction. Developed by Volition, Red Faction Guerilla takes the series into the third person perspective and, in the case of the single player campaign, out into a free roaming sandbox world. This event focused on the multiplayer side of things, and I was surprised by how much the geo-mod mechanics change a pretty traditional multiplayer.

After some warm-up time with both the 360 and PS3 builds I had the controls down, which are a little unorthodox when switching weapons (holding a trigger and selecting with a face button) but otherwise they are tight and responsive. The developers mentioned that they tried to make RFG feel like a first-person shooter played in third-person, and in this regard they have succeeded; RFG is not another third-person shooter like Gears of War or Army of Two. The closest thing I can compare it to is Star Wars Battlefront—the action has a hint of arcade feel to it, with fast, frantic gameplay, creative weapons and a total lack of cover system. Not that taking prolonged cover would do you any good; all the enemy has to do is blast it out from in front of you. 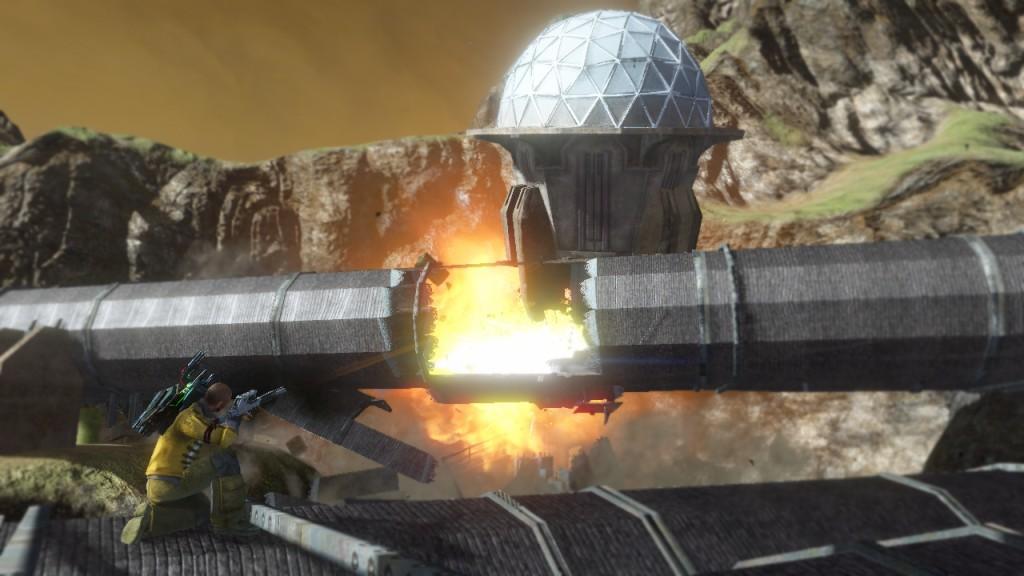 The Red Faction series’ standout feature has always been geo-mod, an engine that makes nearly every structure and set piece destructible. Volition’s application of geo-mod has made rote multiplayer modes fresh and original; I found myself having to relearn how to play regular old deathmatch and CTF, and the Red Faction Guerilla specific modes take some new learning altogether.

Anarchy and Team Anarchy, Red Faction Guerilla’s name for deathmatch, pit up to 16 players against each other in one of the game’s expansive maps. The main difference here is geo-mod; instead of chasing an enemy player through a building or maze, you can blast through walls, smash crates that get in your way, destroy cover and even bring a building down on an opponent’s head, if you have a powerful enough weapon. To that end RFG supplies you with a wide range of massively destructive weapons and bombs, from the series’ iconic mining hammer to standard shotguns, pistols and rifles, and a couple types of rocket launcher. My favorite weapon by far was the singularity bomb, a mine that literally creates a small black hole. This thing is devastating, and can devour a huge building in a matter of seconds.

To supplement the weapons is an array of specialized backpacks. These items can only be held one at a time, and grant special powers like enhanced running speed, instant health recharge or earthquakes that level nearby buildings. Most of the backpacks can be used tactically in tandem with one of the weapons; the invisibility or x-ray packs are useful for sniping, while the rhino pack is good for close-range assault and battering through walls.

All of these weapons and items are available in each game mode, but how they work can change depending on the circumstances. For example in Demolition, only one player per team can destroy enemy buildings, so you have a VIP escort style mode where the rest of the team can only defend no matter what destructive weapons they have. Siege is similar to a standard territory capture mode, but the capture points are buildings that the teams take turns defending and destroying. Damage Control is king of the hill with a handful of neutral buildings on the map, which can be destroyed and rebuilt to accrue points for your team. This mode was the most frenetic because as soon as my team had moved on to capture another structure, the enemy team started destroying the building we’d just taken. 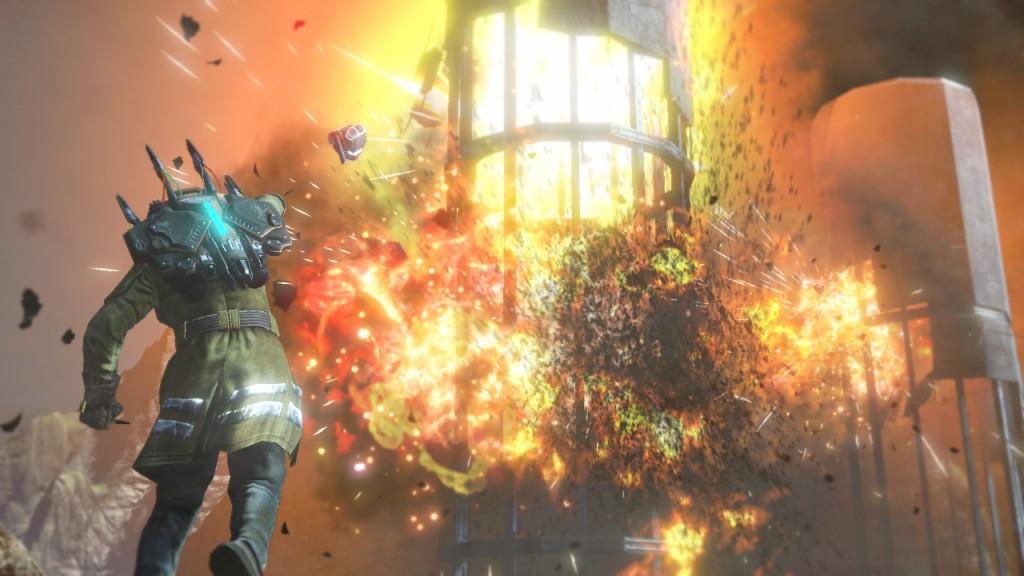 Guerilla also has a party game mode called Wrecking Crew, where you and a bunch of friends take turns destroying buildings and trying for the highest score. This mode can be played under a number of settings, but the only one I played was Rampage. In Rampage you get three minutes and an infinite supply of explosives to clear a map of buildings, but every time you detonate a bomb a few seconds are taken off the clock. I can tell that the wanton destruction and arcade nature of Wrecking Crew are going to make it a big hit at LAN parties when people just want to relax and blow stuff up after a long game.

Even with the number of players maxed out, people setting off explosions and obliterating buildings left and right, the framerate held at a solid 60 fps. I talked with lead multiplayer programmer DJ Hirko about the game’s performance and he said that they did a lot of optimization to keep everything running smoothly. The Havok engine works in tandem with the separate geo-mod engine but they both handle different properties and types of physics. This keeps the framerate up when standard physics is happening alongside destruction physics, where buildings are shattering into seemingly random chunks of rock, metal and rubble.

According to DJ, all of the same assets, textures, meshes and effects from single player are used in multiplayer. In other words, there’s no downscaling—the multiplayer looks just as good as the solo campaign, and although the multiplayer is split across 15 maps (as opposed to GTA4’s sandbox multiplayer), this makes the maps much more diverse and even tailored to different numbers of players. It also fits RFG’s first-person style gameplay better, allowing for quick, tight matches. 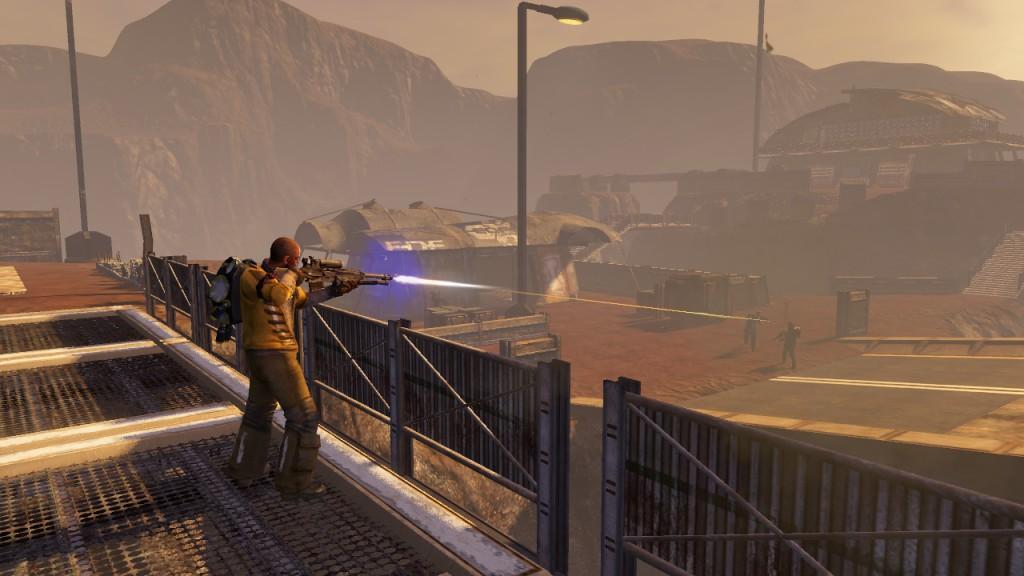 Overall I was very impressed with RFG. Volition has taken a stagnant series with a notable gimmick and turned it into a compelling shooter with geo-mod as an integral, gameplay-changing mechanic. The multiplayer’s use of geo-mod makes it a lot more interesting than typical shooters, and I can’t wait to see how Volition uses it in the story mode. I only played a little of the main campaign (mostly seeing how many buildings I could smash before my allies got fed up with me) but suffice to say RFG is one of my most anticipated games of the summer.

A multiplayer demo will hit Xbox Live and PSN on May 21st, and the game launches on June 2nd. Expect a full review once one of us here at Gaming Nexus gets our hands on this game.