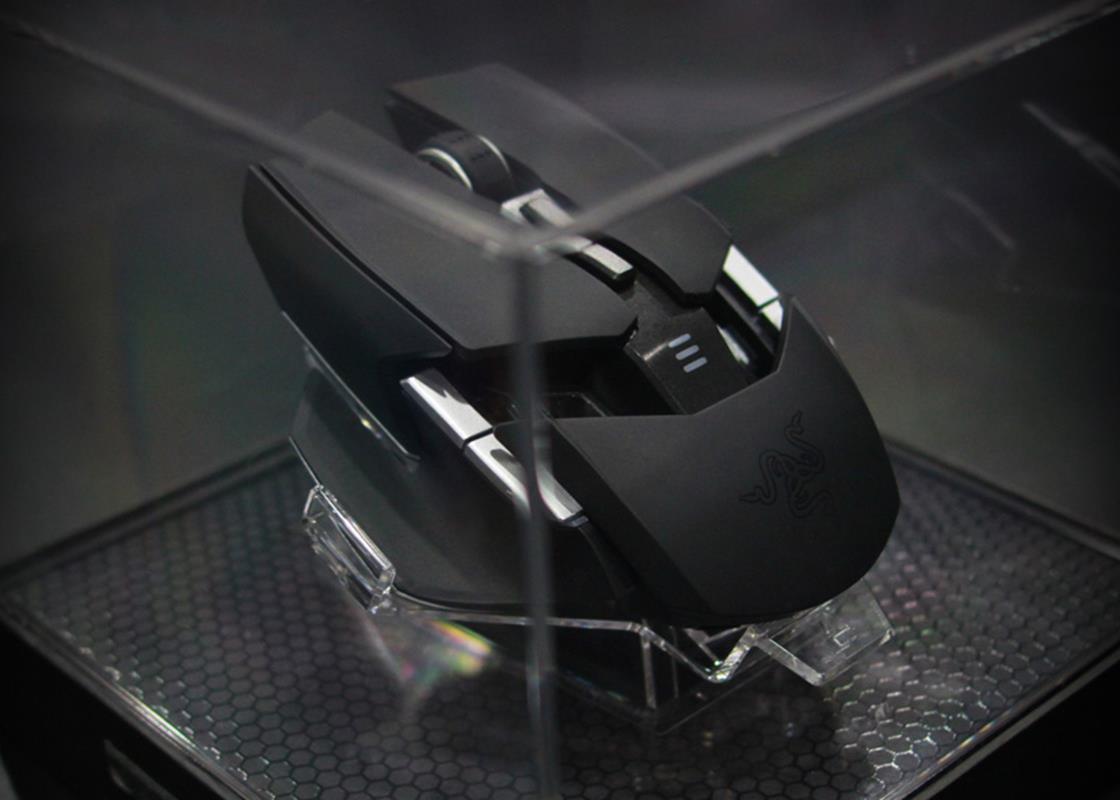 Written by John Yan on 10/16/2013 for PC
More On: Ouroboros
Having used various wireless mice for gaming, I was interested to see what the Razer Ouroboros brings to the table. It’s a pretty unique looking mouse and Razer’s known to produce some high quality mice. Razer was nice enough to send a unit to review and I put the peripheral through its paces the past few weeks.

The Razer Ouroboros is an ambidextrous mouse so both left and right handed gamers can use it. The symmetrical mouse’s design looks like it comes straight out of a movie with it’s various sharp lines and pieces that look like armor plating on Batman’s costume. It’s certainly an eye catching mouse and one that will elicit some responses from those who have never seen it.

Two buttons with a clickable scroll wheel sit on top and all three have a nice clicking feel to them. The wheel has a slight green glow that makes it easy to see in the dark. When scrolling the wheel, there’s a good click feedback to it. 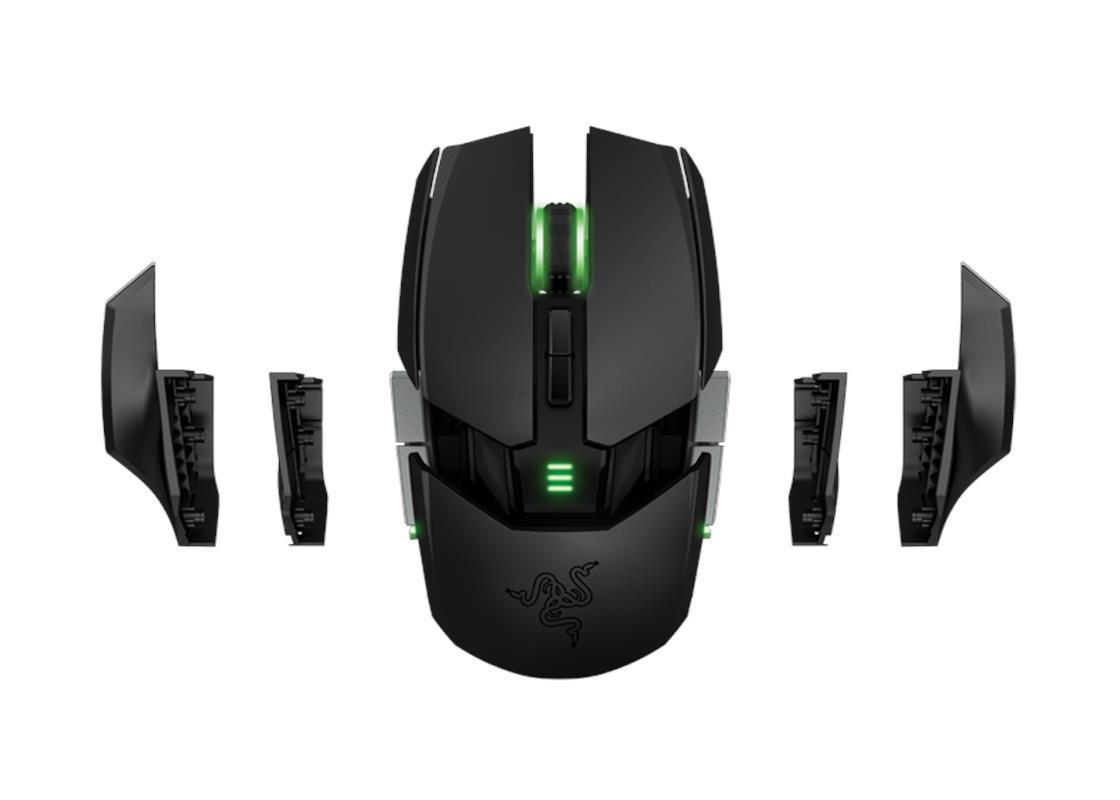 On either side are two thumb buttons and another button underneath that's covered by an interchangeable side panel. The Ouroboros comes with two types of side panels: one for more of a claw grip and one where you can rest your thumb and index finger on. Razer calls this area the DPI clutch trigger since when you hold down the button, it changes the DPI to something much lower for greater control when sniping. I found the button to be a little bit hard to press during times of intense action though. Perhaps a little bit less pressure needed to press the button here would've been better as many times I found myself moving the mouse a little too much when trying to press the DPI clutch.

On the bottom is an 8200 DPI laser that offers up a wide range of sensitivities to choose from. Lift distance is pretty short, for those that pick up their mouse when gaming. Let me say the laser is downright accurate and smooth. With such a high DPI, there’s a large range to fit every type of gamer

Razer Synapse 2.0 is supported so you can save your settings in the cloud. You use the software to customize the buttons and DPI settings on the Ouroboros, which most people should be familiar with by now. 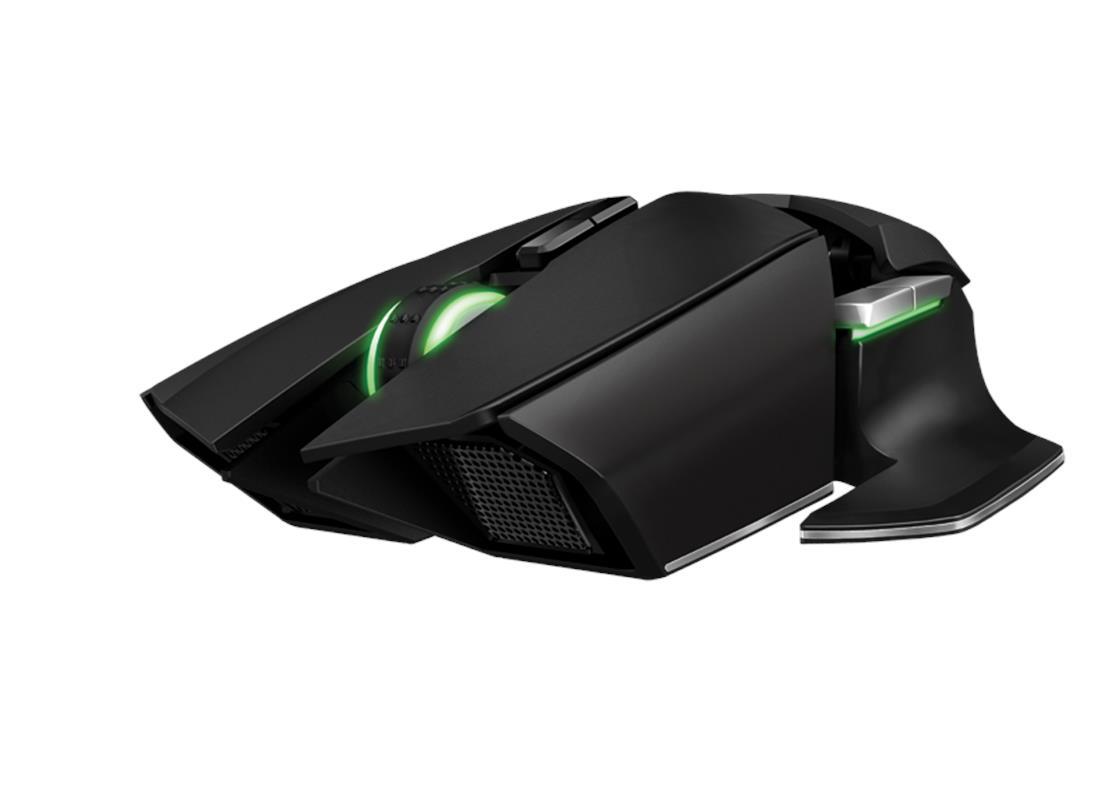 To help make the mouse a litte more comfortable to hold, the Razer Ouroboros features an adjustable palm rest and rear panel. You can slide the rear panel out farther if you have longer hands, which is pretty nice. The arch can be increased where it hits the palm, but I did find a small issue. With the way the Ouroboros is designed, the looks of the arch with the panel, the edge of the panel can dig into the palm when the arch is high. I had adjusted it this way to allow for more surface area on my palm, but found the edge of the palm panel to irritate my hand to a point where I had to lower it. It's a good thought, but I would have made the edge of this area more rounded or made the panel bigger so it wouldn't cut into the palm.

The stand doubles as a charging base so you can show off your mouse and juice it up while sitting on top. Oh, it also holds the wireless receiver as well. It’s got a great micro suction base to it and it really sticks to the many surfaces I put it on. Two small pins sit on top and that goes into the bottom of the Ouroboros to charge the mouse. While the base is small and gives the mouse a pretty nice look when sitting on top, it does take some effort to get the pins to line up just right on the bottom for the Ouroboros to charge. It’s not like a few of the mice I’ve used where it took one or two tries to get the charging pins to connect. The Ouroboros’ stand design, while nice to look at, just makes it a chore to sit on top of it right.

Like some other wireless mice I’ve used, you can use the included USB cable to charge the mouse and use it at the same time. Doing so will turn off the wireless radio and send data through the USB cable, which some might prefer. Like with the stand, it took me a hell of a time to get the USB cable plugged into the mouse correctly, which has the USB slot sitting between the two main mouse buttons. In contrast with the Logitech G700S, which was easy to connect, it took me a lot longer with the Ouroboros to get connected. Like a blind man in an orgy, I had to feel my way through it to get it to charge. 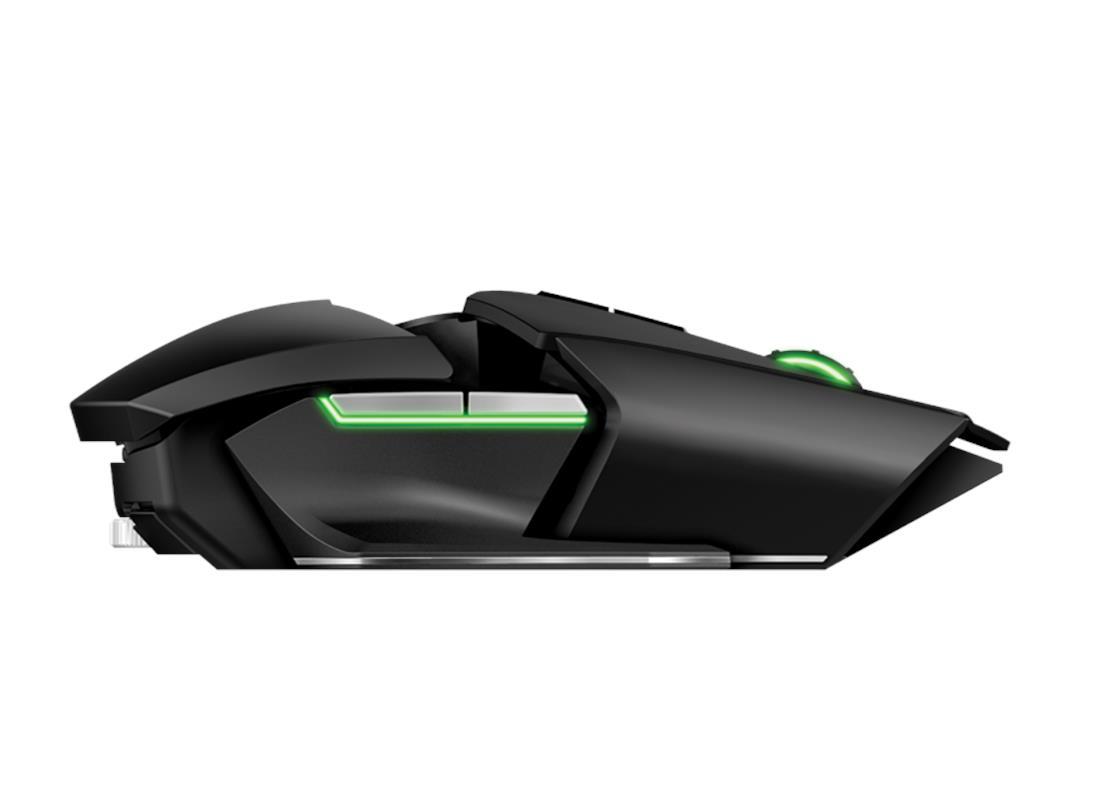 Another aspect that the G700S does better, and this can probably be fixed with some software updates, is when plugging or unplugging the USB cable, the transition from wired to wireless operation and vice versa isn’t that smooth. With the G700S, my character on screen exhibits no movement or sensitivity change when hot switching. With the Ouroboros, I would sometimes have to deal with crazy mouse movements and/or huge sensitivity changes before the mouse would settle and operate normally. These occurrences lasted about 10 seconds or so, but is noticeable. I think the G700 had a similar issue that was corrected with updates, so I’m guessing this can be fixed as well with the Ouroboros.

Performance is first rate in both wired and wireless operations. I played various games that tracked scores or time for a few weeks with my current gaming mouse and the Razer Ouroboros. A couple examples are Call of Duty: Black Ops II and even, Surgeon Simulator 2013. Knowing what score I should be getting or what time I should be near in the various games I played, I set out to see if I can match my preferred mouse in both wired and wireless modes. Surprisingly, or maybe I shouldn't be too surprised as Razer makes quality mice, my times and scores were the same or better than the mouse I was used to. It did take me a few days to get adjusted to how the Ouroboros felt compared to what I was used to, but after the break in period, I found the mouse to be accurate and responsive.

For first person shooters, I was able to accurately aim and follow my targets. Now, I play at around a 4200 DPI resolution and the mouse performed great at this sensitivity. Anything higher was just too much for me, but I'm sure there are gamers out there that can play at the higher settings. My scores, for example, in some team deathmatches with bots in Black Ops II, were what I expected and at times better than what I usually got.

In Surgeon Simulator 2013, I was able to use the Ouroboros and perform each surgery at my expected times and even set some new records. If you played the game, you know how awkward it can be to control the hand and the Ouroboros did a great job in both wire and wireless scenarios.

When talking about battery life, I got about a day and half's usage out of it, which is OK. It runs on a single AA battery and you can pop in another one if you don't want to use the included rechargeable. It's just a bit of a pain to change batteries as you have to use the included screwdriver to take the mouse apart in order to access the battery compartment. Of course, you can plug it in as well and continue gaming when the battery runs dry.

As far as how well the mouse does in games, I had no complaints with the Razer Ouroboros. It's performance in wireless mode felt like it was plugged in. That's a mark of good wireless performance and I had no qualms playing this way. If you're in a tournament or just want to make sure there's no interference, and through my few weeks of usage I can't see I experienced any,  you have that wired option as well.

Like I mentioned earlier, some of the issues I have with the Ouroboros is in the design such as the thumb buttons being just a tad bit too far back for my liking, the difficulty to dock the mouse on the charger, and the difficulty to plug in the USB cable. Other than that, the performance and comfortability (for the most part) of the Ouroboros is great and the mouse can be used by either left handed or right handed gamers. The Ouroboros sells for $150, which is on the high end, but you do get high performance and versatility. It's a solid wireless gaming mouse from Razer and looks great too.
Performance in both wired and wireless mode is top notch. There's some adjustments that can make the mouse feel uncomfortable. It's also a little hard to sit in the stand at times.