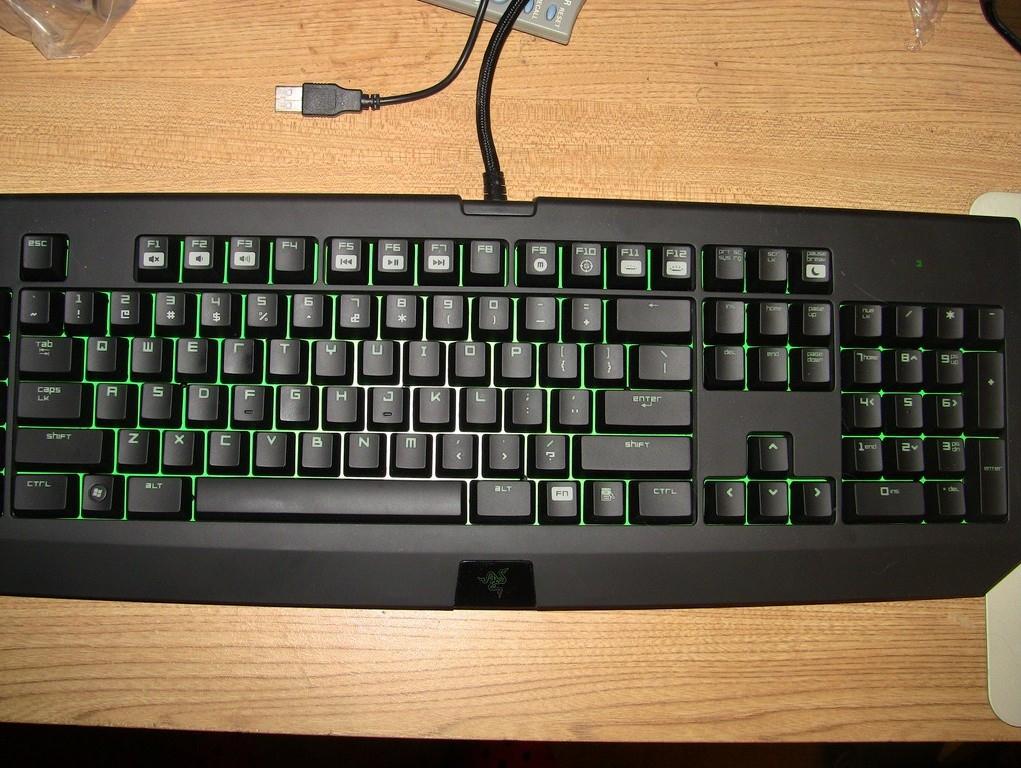 Written by John Yan on 9/6/2012 for PC
More On: Razer Blackwidow
I love mechanical keyboards. It brings me back to my college days when I was gaming and programming away on the IBM Model M; it was just so easy to type on and the audible clicks you’d get was just music to my ears. Of course, they annoyed my wife (girlfriend at the time) since I would spend late nights playing in the same room where we slept. Back then, my computer was in my bedroom since we shared an apartment with others. But I digress.

When Razer released the BlackWidow keyboard a year or so ago, I was pretty giddy about it. Just hearing the click as I pressed the keys brought back so many fond memories. Jeremy did a great review of the Stealth edition and really enjoyed using it. It’s 2012 now and Razer’s released an update to the BlackWidow, which they were kind enough to send over. I won’t go over as much detail as Jeremy since it’s close to the same keyboard and I feel exactly the way he does about it. Instead, I’ll highlight the new features as well as give you my thoughts on the updated version of the BlackWidow.

What we have here is the Ultimate version, which has all the bells and whistles. The design is the same as its predecessor, so you probably can’t tell you’re using the newer version at first glance. It’s simple and elegant and won’t take up more than its share of room on your desk given that it only has one extra set of programmable keys. Whereas the previous had a little more glossy finish, for 2013 Razer went with a matte finish, which I like more. It's designed to now show fingerprints or smudges as much and I think it does do a better job.

On the right side are the audio connectors and a single USB 2.0 port. I do like it when keyboards extend a headset connection to an easier location and the BlackWidow Ultimate 2013 lets you easily plug in a headset to it. I would've liked to have seen a USB 3.0 connector in the new edition, but 2.0 will do just fine.

For 2013, Cherry MX Blue switches are being used for the keys to try and provide a better feel and response when typing. Right off the bat, I could hear the difference between last year's model and this year's model. The 2013's edition makes a little lower sounding click when pressed. It's the click though that makes this such a great keyboard. Not only do you get a very satisfying sound when pressing on the keys, but it just provides a very nice feedback when your fingers press down. You really have to try one out to know what I mean and for those old enough to use the IBM Model Ms, you know exactly what it was like. I sometimes feel I type faster because of the audible sound and fantastic bounce back the keys produce. And as a developer, writer, and a gamer, I really enjoy the feel of the key presses even when working long hours on it, but it's hard to say if it's a vast improvement over the previous BlackWidow. 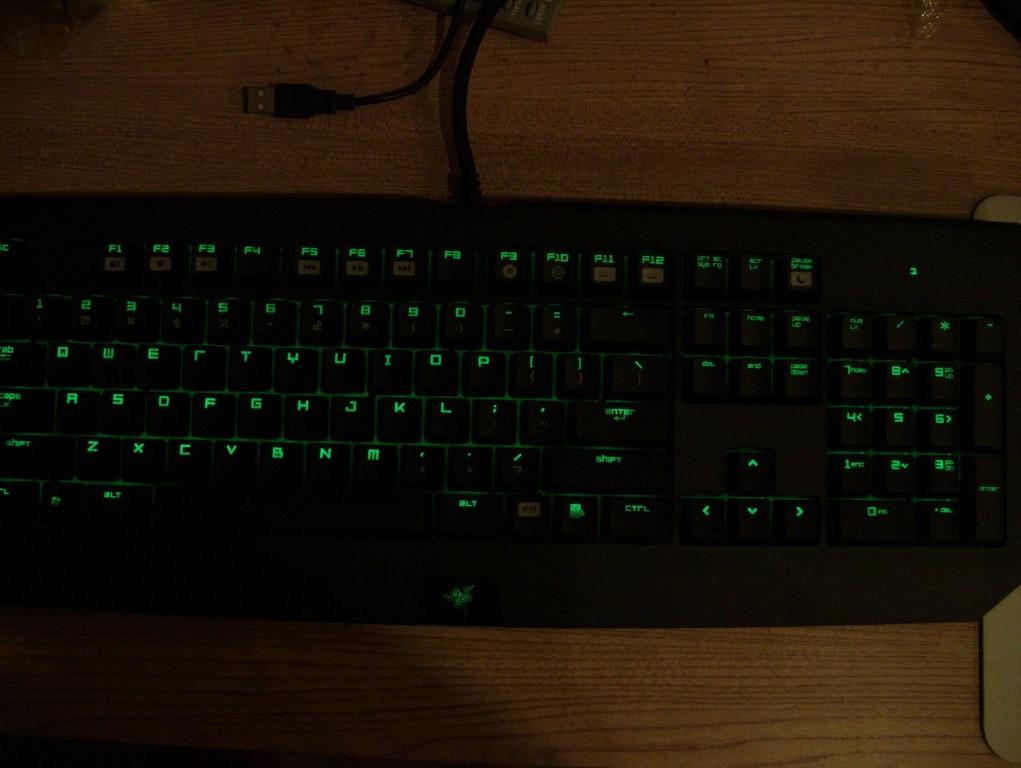 One thing with the Cherry MX Blue switches; they are loud. Because of this, I highly suggest you don't use these in a quiet work environment. They can be rather annoying to others and for those who like to hit the keys hard like I do, they can really distract those around you.  So before you go searching for a mechanical keyboard like the BlackWidow Ultimate,  consider anyone around you and make sure they won't be bothered by the loud clicking sound that accompanies the usage of this keyboard.

Now, there's a debate for gaming on which one is the best: Blues, Browns, or Blacks. Each has their own strengths and weaknesses with most people saying the Cherry MX Blues offer the best feel when doing general typing. Because of how the Blues work compared to the others, some people have a hard time doing quick multiple presses. After playing many hours of Diablo 3, Left 4 Dead 2, Counter-Strike Global Offensive, and Team Fortress 2, I couldn’t find a time where I didn’t feel I had control and had no issues double tapping. I was pretty happy with the performance.

For general usage, the keyboard performed great although I probably would’ve preferred a slightly larger size on the keys. It took me a little bit to get used to, but it can be a minor annoyance until then. Typing a review or doing programming, the BlackWidow Ultimate 2013 didn’t fatigue my fingers after a good day’s usage.

The keys also sport nice backlighting, which you can change with the included software. If it's too bright, tone it down a little or completely turn it off if you don't want any light shining through. But for those that love to play in low light situations, the backlighting is a very nice feature of the BlackWidow Ultimate. 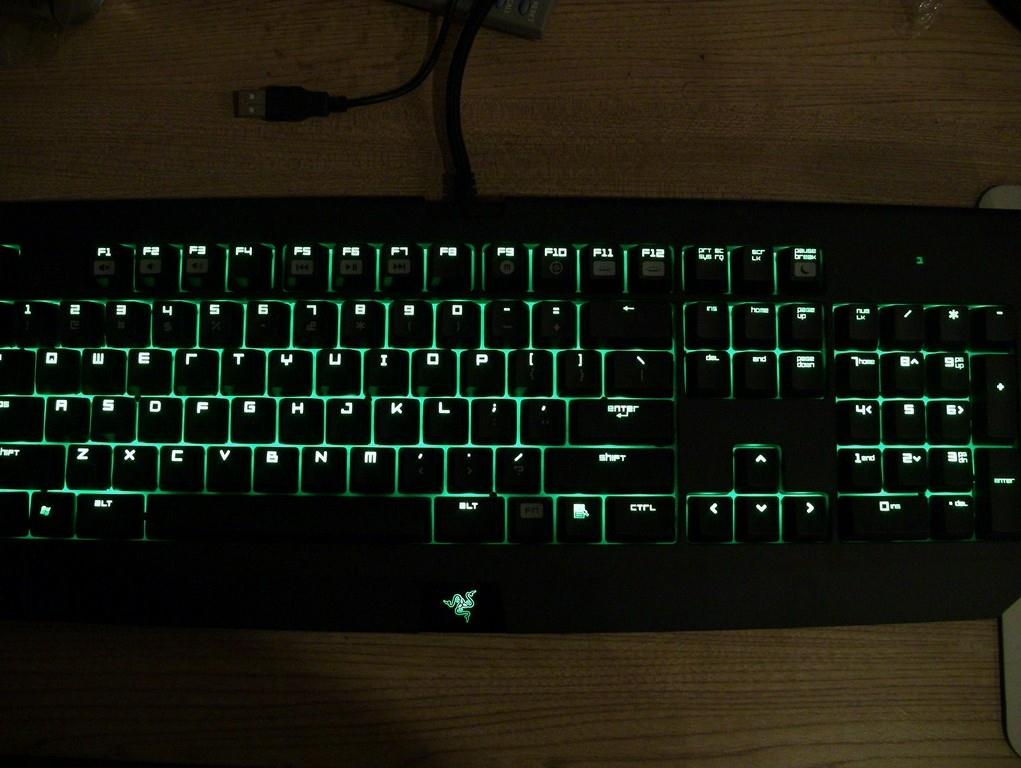 Connection to the computer consists of one long cable that splits into four connections at the end. One is the main USB connector, another is a USB pass through, and then there are two 3.5mm audio connectors (sound and voice). The USB pass through is for the USB 2.0 connector on the right side of the keyboard. I would've preferred a single USB connector like the Logitech G110 that I have where all the audio from a headset routes through the USB connector. It's not THAT big of a deal as once you have it plugged in you're probably not going to fiddle around with it that much, but for those who perhaps go to a lot of LAN parties, having a single connector can be pretty convenient. Still, I'm not going to knock it that much as I said, but I'd love to see the connections be minimized to one USB cable for future editions if Razer decides to make newer ones.

Since the BlackWidow has a ton of customization capabilities in terms of keys and macros, Razer has developed Synapse 2.0 which can save your profiles in the cloud for retrieval later. It's a great feature and you get to keep all the hard work you put into setting up your BlackWidow safely tucked away and easily accessible anywhere you have an Internet connection. I know I would hate it if I spent a good few hours setting up my profiles for each game and have it lost in some sort of hardware failure. With Synapse 2.0, you can rest assured that any thing you do in setting up your BlackWidow Ultimate will be kept should you ever switch machines or even switch out a new keyboard in case of a mechanical failure.

If you currently have a BlackWidow Ultimate keyboard, you can pass this one over as there's not THAT much of a improvement over an already great keyboard that you have. However, those looking for a nice new gaming keyboard with great typing should definitely check out the BlackWidow Ultimate 2013 Edition. It's retailing for $139.99, but you definitely get the high quality that comes with a higher price tag.
Razer didn't change the physical appearance, but did upgrade the internals to try and improve upon an already solid keyboard. It's a good keyboard with a great feel and sound when typing. Synapse 2.0 will save your profile safely in the cloud.