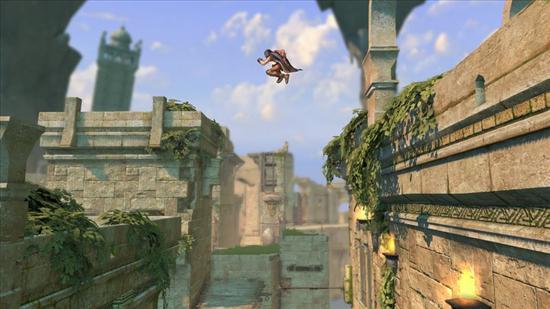 Written by Randy Kalista on 12/29/2008 for 360
More On: Prince fo Persia (New)
Life is circular, and death isn’t as inevitable as some would think. If you’re a prince or a princess, that is.

The Prince has morphed into a comic book character, and that’s not just by virtue of his new-fangled graphic-novel art style. Removing itself from the often droll conversational blocks of Assassin’s Creed (same production team, slightly modified game engine), the Prince of Persia’s Prince rolls with a cynical “See, I told you so” rhetoric that on-again/off-again crowns him with a boyish charm. Thankfully that boyish charm never degrades into outright childishness.

Further contributing to the graphic-novel quality of the Prince’s adventure are the fantastical (and fantastic) watercolor backdrops. Frozen and uncaring when color-drained, breezy and warm when revitalized, the City of Light endlessly conjures its namesake in the green grasses, balletic butterflies, and margarine-colored sands that cup the different districts of the city.

But all is not well. We find the Prince is plodding through a sandstorm in the desert, hollering for his missing and purportedly treasure-laden donkey. Along comes Elika, a comely, acrobatic princess with a duty-bound head on her shoulders and an aim to pay for the sins of her father. Through a singular discordant flashback, we learn that a dark bargain has been struck with an even darker god, and a painful price has already been paid.

The Prince, who is merely “a single grain of sand” blown about by winds of fate, has alighted next to Elika’s familial tragedy: A father in mourning over his long-dead queen, an entire city abandoned due to the king’s neglect, and Elika caught in the empty space between. Partially due to Elika’s stunning good looks, and partially due to the Prince not having anything better to do, the Prince takes up Elika’s banner to restore the City of Light to its former glory. Though it may be entirely too late.

A temple to a dying faith has been handed over to the dark god, and corruption has opened up like an oily, black umbrella over the city. The Prince, accompanied by the stalwart Elika, sets about the task of rejuvenating numerous fertile grounds. While the world lies (mostly) open and (somewhat) bare for exploration, certain numbers of “light seeds” must be collected after the defeat of stage bosses.

With Elika in tow, the Prince runs, wall-runs, jumps, double-jumps, shimmies, slides, and vine-climbs his way about the painterly cityscape. The camera maintains flawless control of the situation, effortlessly telegraphing the Prince’s next move. And when strung together, the Prince’s moves add up to patiently-pressed strands of QTEs (quick time events). Except instead of waiting for a random button to queue up onscreen, the nature of the environment dictates which button press is required next. It’s completely contrary to button mashing—which tosses the Prince over a cliff rather quickly—and requires a steady hand.

If your steady hand fails you, Elika is there to save the day. Not only does she chime in with magical combo attacks and burgeoning but unrealized romantic chemistry, she serves as a Continue Button and Reload Screen all in one. Many of the reviews you’ve read about this game simply chalk this convention up as: You never die. Which is entirely true, but misses a much larger point summed up in this question: How fun is it to fall and die?

Mirror’s Edge players may feel conflicted when trying to answer that. Is it fun to fall and die? No, of course not. Is it fun to finally succeed after falling and dying so many times before? Absolutely. So what happens when a game like Prince of Persia swings along and makes falling and dying (i.e., losing) an invisible process? What happens when you “fail” a jump, but are seamlessly restored to the last level platform you stood on? 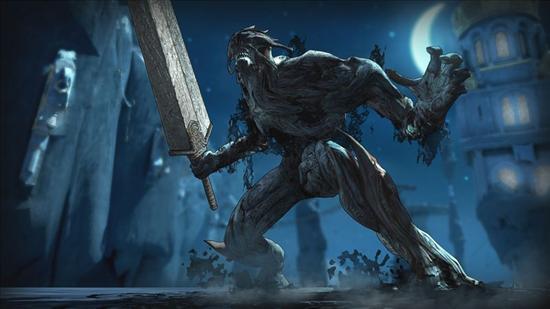 What you have then is a standardized cover-to-cover novel as opposed to a choose your own adventure book.

But what if Elika needs the Prince alive? What if Elika can’t complete her mission without the Prince’s aid? What if she reaches out her hand and flawlessly snatches the Prince from the jaws of death, no matter how difficult the circumstances, each and every time? Then, yes, you have that standardized cover-to-cover novel. In a novel (with incredibly few exceptions), the protagonist doesn’t die a thousand times over before slaying the dragon and saving the princess. Coming back from the dead is a fantastical option, sure, but even if Jesus Christ saw you fall off that Mirror’s Edge building for the fifteenth time, He might grow weary of the resurrection game and probably start shopping around for a more competent apostle.

So yes, there is a “fail state” in Prince of Persia, but it’s so quick and easy to recover from that it sometimes feels like you rarely fail at all. This accomplishes two things: First, it softens the jagged edge of failure that is the number one cause of broken controllers. Second, it clips the highs and the lows of victory and defeat, effectively shaving the gaming experience down to a plateau. It’s a good plateau, but a plateau nonetheless.
This no-fail state takes on different proportions during combat. Exclusively one-on-one affairs, Elika will save the Prince’s skin again and again during combat, but this saving grace also regenerates some of your enemy’s health. Fights can turn into long, protracted engagements if you’re having an off day. But on that same token, if you set down the controller and leave the room, you can return anytime later and see that the Prince has not died even once during that time. This has been entirely too much for some critics to wrap their heads around, but ultimately this approach makes for an all-around friendlier Prince of Persia experience. Again, it just depends on if you require sharp peaks and valleys to garner a sense of accomplishment.

The boss battles, though, manage to be far more than the typified “hit the glowing spot” encounters. Taking place across multiple stages and multiple battlegrounds, the bosses are surprisingly well-fleshed-out for the amount of onscreen time they have. Never once are they merely bad guys to beat in order to open the next door—rather, they’re integral to the growing story unfolding within the City of Light.

Sadly, the middle game doesn’t hold. It manages to turn a rewarding activity like collecting “light seeds” into a door-unlocking grind. Once the awe of the new experience wears off, and before the understated but strongly-written end game kicks in, travelling about the City of Light sees its charm wear thin.

And this is where the visual details hold the experience together. One section of the map, The Vale, is stacks of towers slapdashed together from the creaking hulls, tattered sails, and cargo netting of seagoing ships; the low-rise badlands in the backdrop simulate a dusty clutch of ocean wake; seagulls caw overhead. The Royal Palace is blistering with Arabian Nights flavor; a place where you’d expect Sheherezade herself to emerge and begin telling 1,001 tales to a beheading suitor. The Sun Tower has immense flames of rock arcing towards the sky, and immense windmills harnessing the constant wind. And the Ruined Citadel–a reminder of a people’s wrongs–is enclosed from the bright outdoors, with a murky palette painting it dimly like a stalagmite in the corner. My only regret with the camera is that (while flawless for the purposes of navigating the terrain) it’s often hesitant to show off the long-distance vistas in and beyond the City of Light. 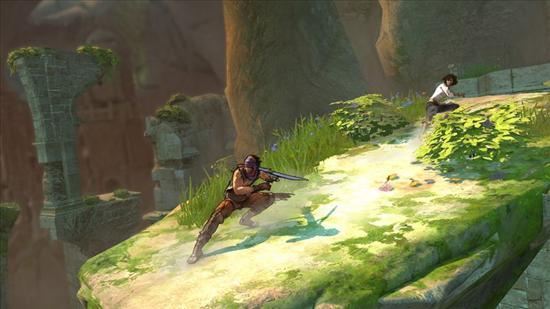 While admirably confident in its new direction, the Prince relies too heavily on the lifesaving Elika and the endgame story to carry the entire tale.