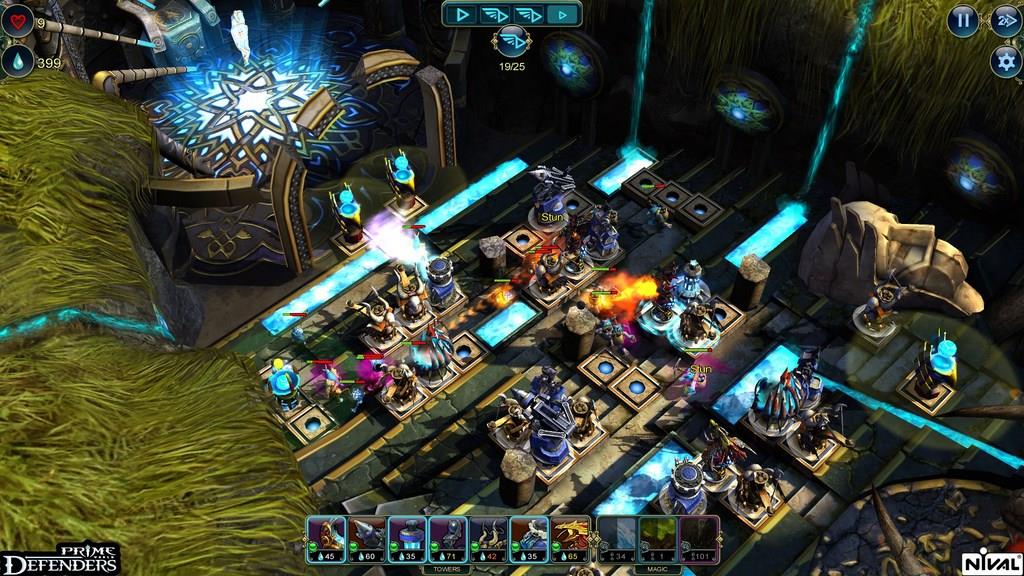 I couldn’t think a better word to describe my relationship with Prime World: Defenders.

I previewed Nival’s collectible card game / tower defense mash up a few weeks back and found myself addicted from the start. Granted, it took a little bit for the game to get going, but once it did I was hooked. Even in that incomplete, non-finalized version of the game, the groundwork was laid for a great tower defense experience. I am happy to report that the game has only gotten better as it has made the transition from beta to official release.

The premise is simple: you have a base and you need to stop hordes of bad guys on the ground and in the air from reaching your base. You set up towers that attack your enemies along the path to your base and hope that you can take them down before they reach their goal. That much is simple and the core experience of nearly every tower defense game in the genre. Prime World adds a spin on that though by exchanging your usual towers with collectible cards.

As you progress through this world, you will obtain a variety of cards, each representing different towers or abilities that you can use against the “touched”(what the game calls your enemies). Management of this collection and the abilities that they harness is the key to survival. You have strict limitations on the number of cards that you can possess, as well as the number that you can take into battle, but that will all evolve over time as your progress through the adventure. The entire experience is about growing and expanding and this is meant in terms of both your card collection and each card’s individual powers.

The key to your progression lies in the Forging system, which allows you to evolve and develop your card collection. When forging, you have two options: fuse and evolution. Fusing cards involves sacrificing unwanted cards, or those meant to enhance the fusion process, for the sake of boosting a card’s stats. This is pretty fun as different types of towers can be leveled up to different heights;some cards may only allow for fusion up to level five while others may be 15 or 25. It all depends on the card type. 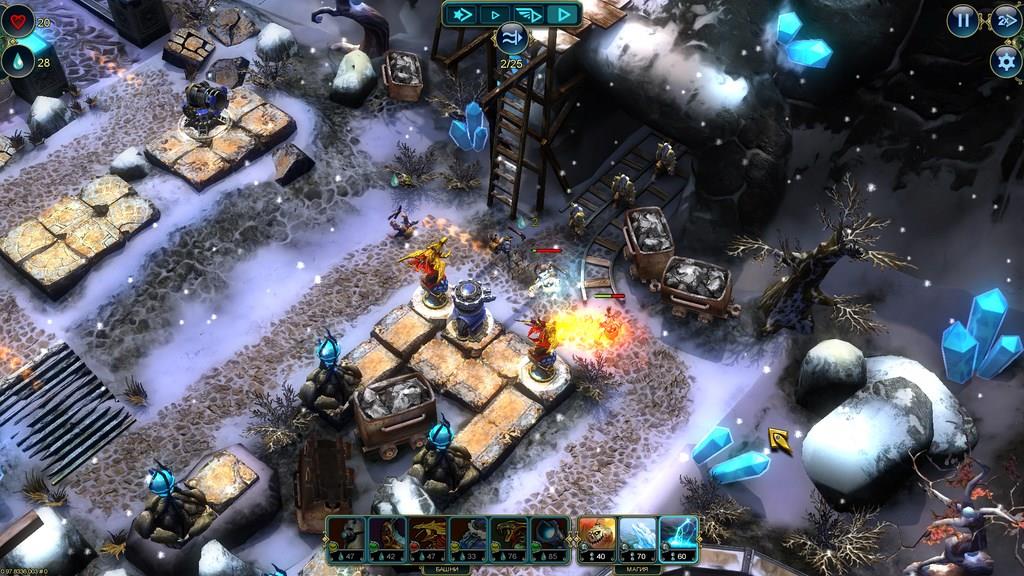 While I like having the ability to pump up my preferred cards, I wish that there was more of a method to the madness. As it stands now, you simply sack cards and hope for a marginal improvement of the stats. There aren’t specific cards that effect range or power, it is simply a “throw everything in”and hope for the best type scenario. Had there been a specific system or reasoning behind the stat alterations (maybe there is an I am just not seeing it), then there could have been an added element of personalization to the game. My level-5 wooden tower might perform drastically different than my friend’s, perhaps favoring range over raw, short-reaching power.

The other option, evolution, requires duplicate cards. You can only evolve a wooden tower with another wooden tower, or whatever card is in question. This is the process that adds the ability to upgrade your placed towers during battle; upgrading them multiplies their attack power by a factor of 2 or 4. This becomes key in the long run because the more towers that you build, the higher their resource price becomes. Eventually, it will be come more affordable for you to upgrade existing towers versus building completely new ones.

Despite my criticisms of what could-have-been, what is here works extremely well and works wonders to alleviate the monotony that normally accompanies the tower defense genre. It is a little easier to go back and replay a level or map 10-15 times considering that I can make minor (and sometimes major) tweaks to my arsenal in between each battle. That is good too because you will be playing these levels a lot if you want to get the most out of your virtual card collection. Money drives every upgrade and enhancement that you will discover in the game, and it doesn’t come easily. 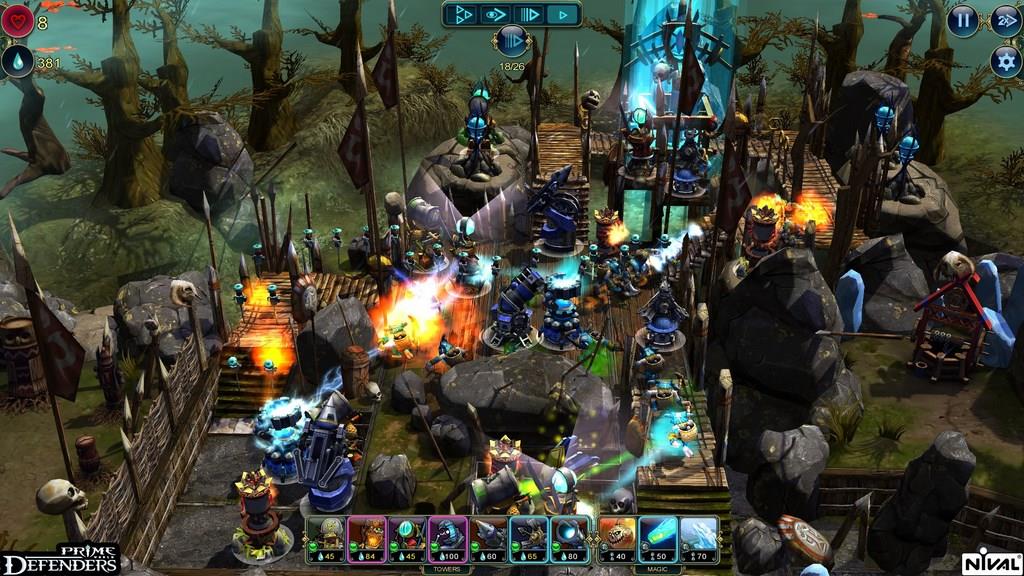 That is perhaps my single-biggest criticism of the game: it is very stingy with its currency. the game has the look, and almost feel, of a free-to-play / freemium title, including the awarding of daily prizes for playing the game. There are a variety of in game stores that you can access to upgrade different aspects of your collection. The difference is that you won’t be dumping real-world money into these stores but both coinage and stars that you earn in battle. The stars come well enough and are awarded depending on your performance in battle, where you can earn a maximum of three stars per stage. The money on the other hand doesn’t seem to come nearly as easily with you only winning a few hundred silver coins on most levels. Card fusion is somewhat affordable given the rate that you earn money, but evolution and overall upgrades (which the game call talents) start at 500 and go into the thousands. this means that they won’t be accessible that often; you will have to plan and choose your advancements wisely.

The world is well-crafted and visually gorgeous, especially for the tower defense genre. The story is enough to keep you interested and give meaning to your efforts, but don’t expect to it to paint an epic tale, the gameplay alone does that. An excellent camera system that allows you to get a full, 360-degree view of the battlefield at any given time only helps to show off just how gorgeous it is. Unfortunately the sound design doesn’t impress quite as much, becoming very repetitive both in terms of its voice overs and background music. The dreaded tower defense-monotony is also reduced thanks to great level design and a varied roster of enemies. Sure, you see a lot of the same maps over and over, but each time they undergo minor alterations to them in the form of totems and stagnant towers that alter the enemy routes. It is a simple mechanic that goes a long way in the grand scheme of things.

There is a smart design evident here, one that straddles the line between becoming too monotonous for its own good and one that gives you just enough to keep you going. This creates an insanely addictive experience that has kept me coming back for nearly 20 hours and counting with no end in sight. Fans of both the CCG and the tower defense genres are sure to find plenty to love in Prime World: Defenders. Now, excuse me while I go back to collecting more towers...
Prime World Defenders is a lot of fun and one of the best tower defense games on the market. Its problems lie more in the lack of refinements on some great ideas. The scary thing to me is that it is “this” good and still has a lot of room for improvement. This could turn into a powerhouse franchise if Naval plays their cards right... get it?