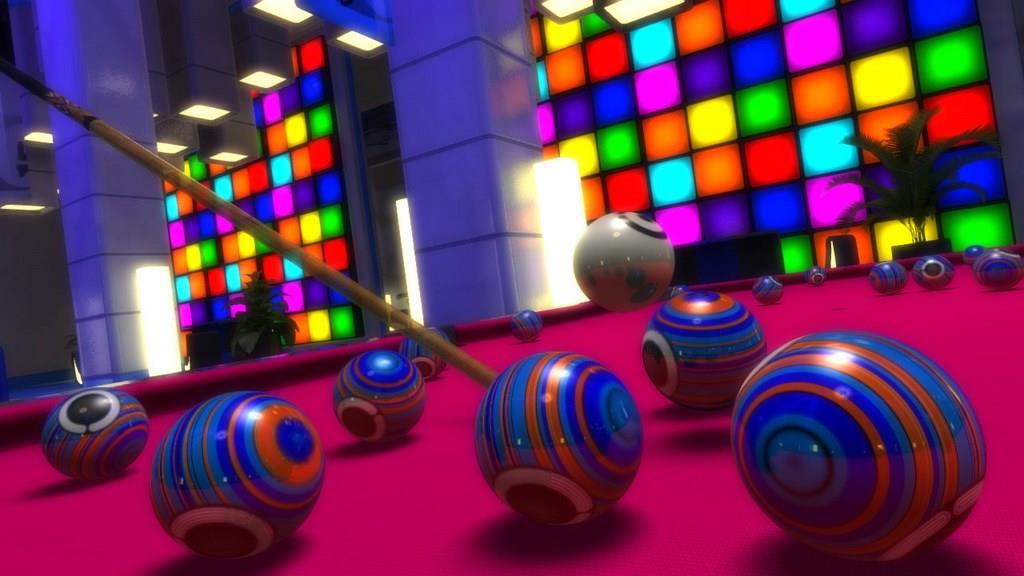 Written by Jeff Kintner on 7/25/2013 for PS3
More On: Pool Nation
Pool Nation from Cherry Pop Games has been available on Xbox LIVE Arcade since October of 2012, but was only recently released on the Playstation Network. It features online and offline play and a ton of collectables. I can honestly say that Pool Nation is one of the most polished games I've picked up this year.

The graphics in Pool Nation are amazing. It feels odd to heap such high praise on a pool game for its graphics, but they are just that good. When I first picked it up, I was worried that I was going to have to deal with a dingy, uninteresting background set behind an equally dingy green table. Thankfully, this was not the case. Before every match starts you get long, sweeping views of the beautifully vibrant pool halls, which are all decked out with shiny, modernist furniture and are lousy with ambient lighting. In fact, if I were to sum up Pool Nation in one word, it would be "Shiny"; everything seems to have a reflective sheen to it. Even the house music playing in the background is bright and soothing.

The gameplay is just as smooth as the graphics. The physics are realistic and responsive and there's a wide enough variety of game types and tricks to keep you from losing interest anytime soon. The control scheme is fairly in-depth so it's a little intimidating at first, but thankfully there's a quick reference button. Pool Nation does a lot to make newcomers feel at home without dumbing it down or blandly spelling it out, which is always a mark of good design in my book. It's also interesting to note that there's no traditional difficulty settings. Instead of making the A.I. more difficult, you can choose to handicap yourself by turning down the aim assist. If you aren't so confident in your snooker abilities, you can have an arrow point out your entire shot to you. If you're looking for more of a challenge, you can reign it in to a mere hint of a direction, or turn it completely off.

What really makes Pool Nation a cut above other pool games is that you have the ability to do anything you could conceivably do during an actual game of pool, rather than just being a pool simulator. Jumping balls and curving shots are par for the course; you can switch between a top-down view and staring down the barrel of your cue; and you can lock in your aim, angle and power, so fine-tuning your shot is relatively easy. I don't know about you, but when I actually play a game of pool it all boils down to luck. Hand-eye coordination has never been my strong suit. Thankfully, this isn't the case in Pool Nation, where patience and strategy are the keys to sweeping the table. 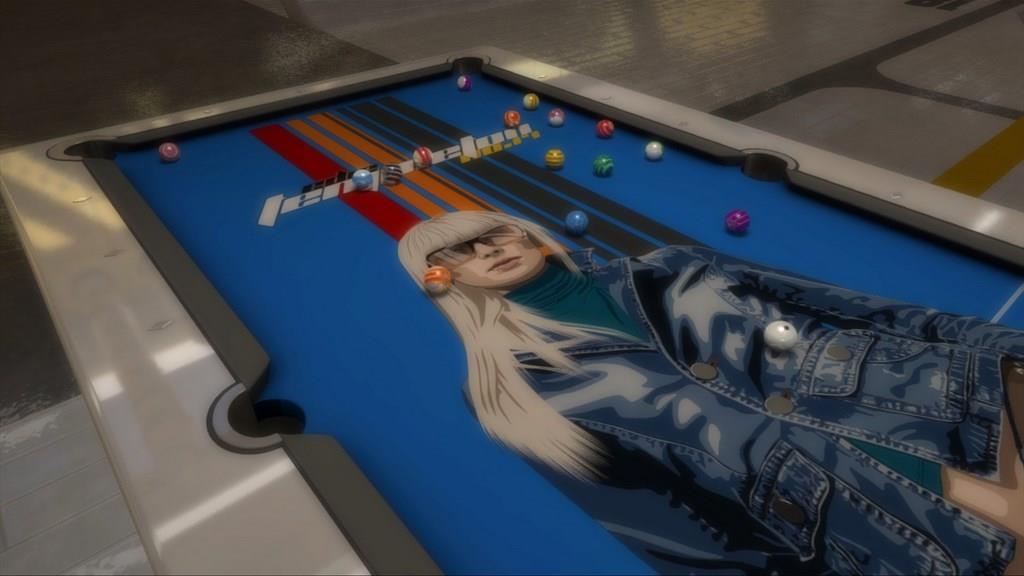 The single player tournament mode is largely a series of traditional 8-ball or 9-ball games broken up by bonus matches where you play one of the more exotic modes to unlock ball sets, pool cues or table decals. Each tournament match also unlocks the character you were playing against. The characters amount to little more than pictures to fill space next to your scorebox, which I have to admit is way better than having  someone lurk behind the table  while you line up your shots. Each character also comes with a short bio that adds a bit of humor to the game, even if some of them are downright nonsensical- like Fronk L'emur, the guy who thinks he's a lemur. My personal favorite has to be "Thumbs" Smith- not because of his bio, but because he looks like an evil Wil Wheaton Doppelganger (but I doubt that was intentional).
Pool Nation has no shortage of unlockables- there are 48 characters in all, and each of them have 2 table decals of their faces to unlock. On top of that, there is a slew of cues, ball sets and decals to pick up in tournament mode by completing challenges and bonus matches, and of course DLC packs with even more skins and sets.

There's nine game types in all: including the traditional 8-ball, Endurance Mode, and a few modes with alternative objectives like clearing the table the fastest, or potting a ball in all 6 pockets. The non-traditional modes are just as solid as the standard tournament play, and they make sure that Pool Nation has more to offer than most pool games.  The only slump is that there isn't much of an online presence, so after waiting more than twenty minutes for a match up I just went back to the single player tournament mode.

The only real complaint I have about Pool Nation is how inconsistent the A.I. can be. There were matches where I didn't even have a turn after breaking because the computer sank ball after ball after ball; only to be followed by a rematch where the computer missed half of their shots. But more often than not, the matches are fairly close. When the computer is really 'on', a single missed shot can cost you the entire match, so I was extremely grateful for the Flashback mechanic- which basically gives you two mulligans per match. The beauty of the Flashback is that if you think it's cheap to get a redo, you don't have to use it. In fact, you're often rewarded with a bonus match for not using any of your Flashbacks.
Pool Nation is a great game that has a surprisingly long shelf life. It hits a nice balance between accessibility and challenge, letting you play however you want; whether you're a no-crosshairs, no-mercy kind of player, or if you're a newbie that needs all the help you can get. Now, if only Cherry Pop could make a version for the Vita so I have something to play on long car trips...