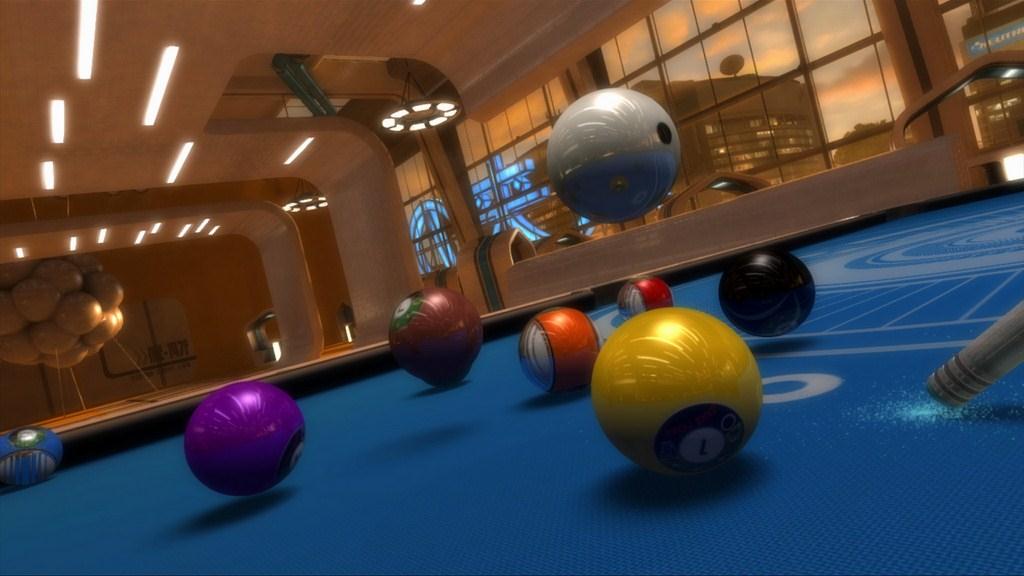 Written by Nathaniel Cohen on 10/31/2012 for 360
More On: Pool Nation
The pool shark is a common character trope in entertainment.  They’re part gambler, part con artist, part rockstar, and all danger.  It’s the sexy kind of danger though, not the “you’ve fallen into my trap and now I’ll wear your skin as a Halloween costume” kind of danger.  Pool is arguably the only cool “bar sport” and as such triumphs over darts in the number of digital simulations available across any number of platforms.

The latest version of pool offered up to the digital realm for judgment is Pool Nation, which is an odd title given that you don’t travel the nation playing pool - or at least you don’t get any sense that’s what you’re doing.  Actually, I think the inanity of the title sums up the game rather well.  Don’t get me wrong, I’m not saying that Pool Nation is a bad game, but it suffers from the same kind of aimlessness that obviously went into the naming process.  There’s no career mode.  Instead, you get a series of simple ladder tournaments of increasing difficulty.  There are no characters.  Your AI opponents are poorly rendered static faces completed by the most detached “personality” descriptions this side of a sociopath trying to explain how his victims must have felt as he was flaying them to make his Halloween costume.  In fact, there is no human presence to be felt in the game at all.  Matches are contested by a pair of disembodied pool cues in fancy and completely generic locations decked out as if an android was trying to make its human pets more comfortable.  Nowhere in this game is a spectator, bystander, passerby, loiterer, or hall-urchin to be found.  In the Pool Nation world, androids don’t dream of electric sheep, they dream of Pool Nation.

By now, I’m sure most of you are thinking, “That’s it, I don’t need to read any more.  Pool Nation is a pass for me.”

But wait just a second because Pool Nation is not a worthless venture intended to leave warm, feeling flesh cold and clammy - wanting for the touch of smooth blemish-free robotic affection.  You see, despite all I’ve said, Pool Nation contains probably the best pool simulation you’ll get outside of your local dive bar.  And if you play pool anything like I do, then it’s already a simulation of actual pool instead of the real thing.

What Pool Nation gets right, namely the basic act of playing pool, tells you all you need to know about it as a game and paints my previous complaints in a new shade.  Obviously, a lot of work (or at least, the majority of the work) went into fine-tuning Pool Nation’s physics, shot mechanics, and aiming because they are as spot on as you could ask for.

Now obviously, there’s not much I can say about the physics except for the fact that the balls act in a predictable fashion, and you can’t play pool without some hard and fast rules of physics.  However, the shot mechanics and aiming are a little different because there is just more to get wrong; yet Pool Nation gets that stuff as right as seems reasonable. 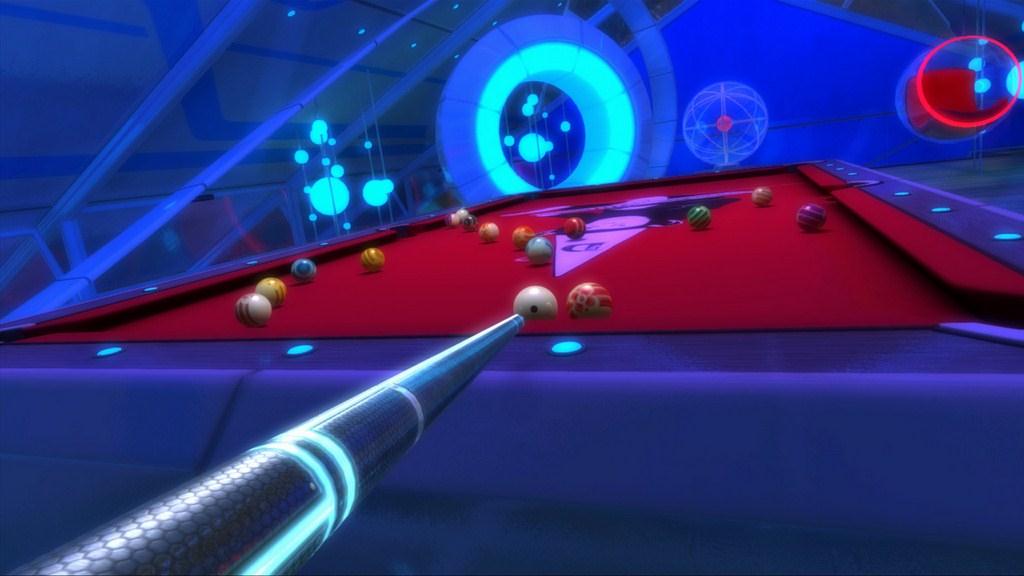 First of all, aiming and shooting are integrated in such a way as to almost make them one unit.  You are given complete control over the angle of the cue, the spin on the ball, and the power of the shot and all that drastically influences your aiming to the point where it’s often easier to decide on power first, and then build from there.  When it does come time to actually line up the balls so they go where you want them to, you are given obvious lines of travel for both the cue ball and either your target ball or the rail.  At first, it seems too easy, but when you think about, all it does is make easy shots (and even some hard shots - more on that in a sec) the gimmes they should be.  The real challenge lies in the potting order of your balls and the leave of cue ball.

The one issue, and it’s an arguable issue to be sure, is that after a little practice you’ll be nailing jump shots, swerves, and knife edges like a boss whether you need to or not just because you can.  Perhaps the extra difficulty of combos and kick shots balances things out.  Those shots don’t benefit from the generous aiming tools at all, because you’re only shown the path the balls will travel up to one ricochet.  Beyond that, you’re on your own.  It may seem a little out of whack for master shots to be easier than advanced one, but no matter how you break it down, overall, it’s a great system that allows those like me, who are angular-impaired, to jump right in and not embarrass themselves.  And if you still think it’s too easy, then you should know there are two other more difficult aiming assistance levels, or you can just turn it off altogether. 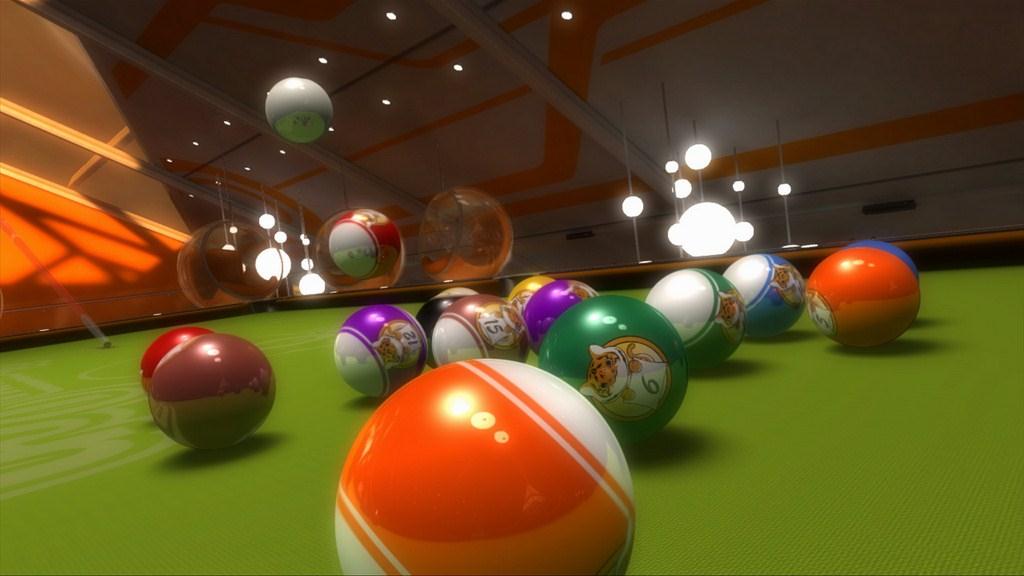 Game-wise, Pool Nation offers several different versions of pool.  The traditional games of 8- and 9-ball are there with their own associated ladder tournaments set in four locations of ascending difficulty and frame number, and there are several other less-traditional modes as well.  These include games like 3-ball (pot three balls in fewer shots than your opponent), Straight pool (first to pot 30 balls wins), Speed (pot all the balls in less time than your opponent), and others. All the modes are available for 2-player versus matches with your friends and family right there in the room with you or online; however, Speed and a game called Golf are left off of the online roster.  Pool Nation’s other online features include ranked and unranked matches, custom matches, tournaments, and leader boards - in other words, it is exactly what you’d expect from a modern videogame.

Along with 8- and 9-ball ladder tournaments, the other major single-player mode is called Endurance.  It’s basically Tetris Pool in that the object is to pot balls as fast as you can while new balls are added to the table up to 24.  Hit 24 and you lose.  Potting balls builds up a power bar that, once full, allows you to stop the adding process for a few moments while committing fouls like scratches result in balls being added faster.  For my money, Endurance is more trouble than it’s worth.  If you ever wanted to get the sensation of frantically trying to find the air pocket in a room filling with water before you drown, then Endurance is the game-mode for you.  It’s just not for me.

Finally, customization also shows up in the form of unlockable balls, cues, and table decals.  These are unlocked via bonus rounds during the single-player ladder tournaments.  To unlock these bonus rounds you simply need to beat the relevant opponent at one of the eight mini-games.  Each ladder match comes with two other goals that if completed net you up to three stars.  Getting every star is for the completionists out there, as they don’t seem to net any kind of reward other than a higher score.  Naturally, if I don’t get all three stars I feel like a failure.  If that gets to be too much for you, then you can replay every match as soon as it’s over (or any time, really) whether you win or you lose.

Ultimately, Pool Nation is a fun, if a little bit austere, game.  It lives up to its own “pixel perfect graphics” and “slo-mo replays so detailed you can see the chalk fly” hype.  So if you’re looking for something to sate your pool appetite, but were banned from the local dive bar for puking in the bartender’s mouth, you should definitely give Pool Nation a look.
Pool Nation is a solid pool simulator on more of a tech-demo level than that of an actual videogame so the asking price of 800 Microsoft Points seems a little steep. However, if you love pool and sitting down and have spare MSP burning a hole in your HDD then you’re probably not going to find anything better out there than Pool Nation.