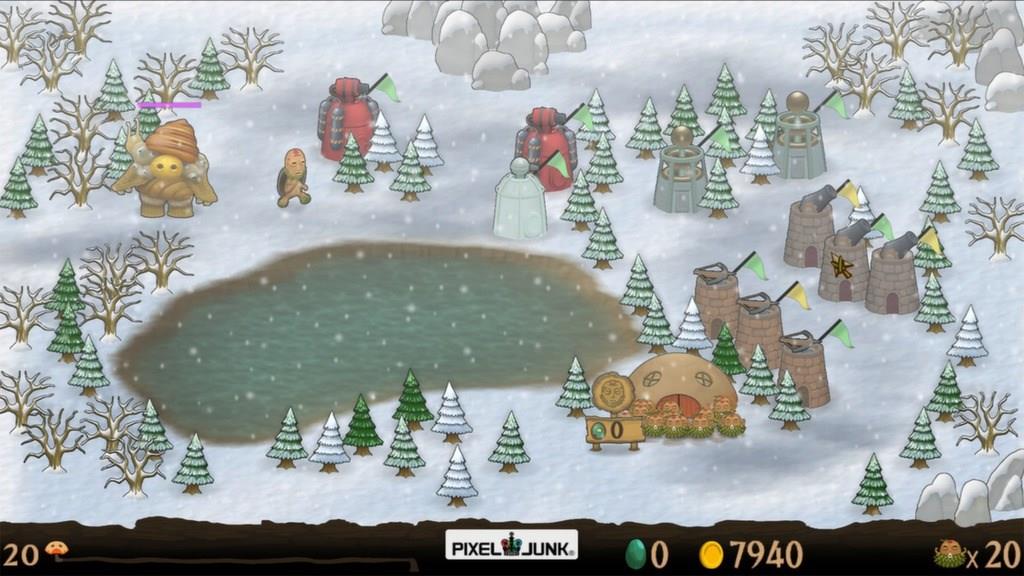 Written by Russell Archey on 9/12/2013 for PC
More On: Pixel Junk Monsters Ultimate HD
Tower defense games have been around for a while now and can be found on any current generation gaming system and especially PCs.  Some are more well-known than others, which is why you’ll likely hear a lot about Plants vs. Zombies before hearing about a game like Defense Grid: The Awakening.  All tower defense games have a common goal: set up towers and/or traps to slow down or defeat groups of enemies before they reach their goal.  However not all tower defense games go about achieving that goal the same way.  Some just have your basic strategy of setting up towers and upgrading them, while others are more involved.  PixelJunk Monsters Ultimate is a mix of both.  Not too overly complicated, but not just your basic tower defense game either.  Let’s take a look at the game to see just what I’m talking about.

As with other tower defense games, the goal of PixelJunk Monsters Ultimate is to stop wave after wave of enemies from reaching their goal.  This is done by building various towers on the map, then once they begin to wipe out enemies you can collect the gold and gems they drop to build better towers or strengthen the towers you already have to increase their power and range.  While you can’t place a tower anywhere you want, any tree in the stage can become a tower, so you have plenty of options as to where to place your towers.  After each stage you’ll go back to the map to select your next destination.  You can also replay stages you’ve already completed to improve your performance and shoot for a perfect stage where you don’t let any enemies through. 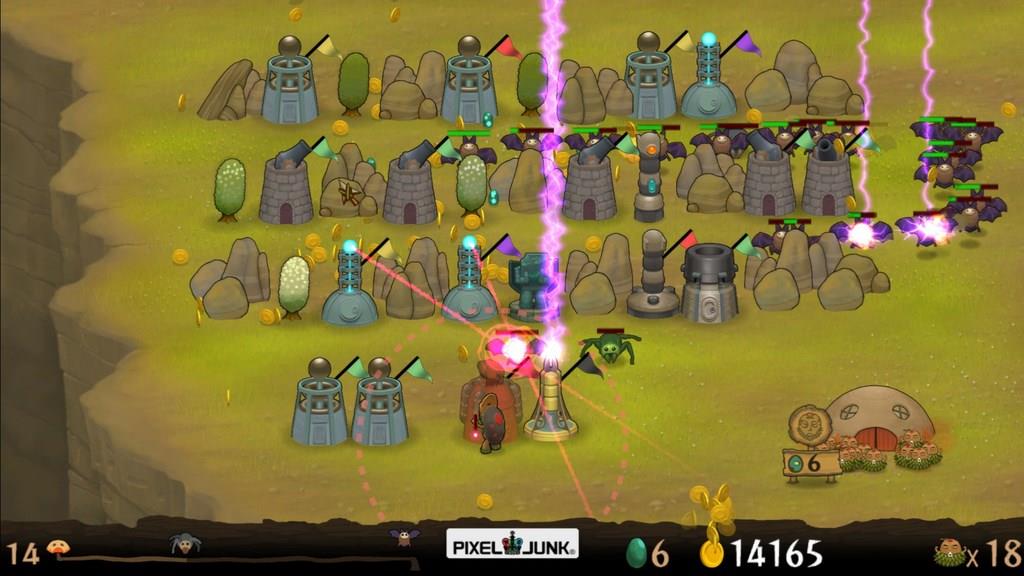 At the start of each stage you get a small amount of gold to build towers with, so at first you’ll only be building smaller towers such as arrows.  Once you defeat some enemies you can collect the gold they drop to work towards building better towers such as cannons and anti-air turrets.  Each kind of tower has its own speed, range, power, and types of enemies they can hit, and this is where the first disappointment lies for me: for the first part of the game, the simple arrow is the only tower that can hit both flying and ground enemies.  Other tower types include cannons and tesla coils (ground only) as well as anti-air turrets and lasers (air only).  Once you complete the first island and progress through the others you’ll see other towers you can unlock and use.

As stated before, to build the higher-value towers you have to collect the gems that enemies can sometimes drop when they’re defeated.  These gems can be used to research better towers or can be used to automatically upgrade your current towers.  Researching better towers takes a lot of gems, anywhere from ten to fifteen depending on the tower you wish to research.  As for upgrading the towers you already have built on the field, there are three ways to do so: stand on top of the tower and do a little tiki dance, have the tower just do its job and damage enemies, or spend gems to upgrade it.  The first two methods take a bit of time depending on the tower’s current level (noted by the colored flag), though dancing next to a tower is a good way to finish off leveling a tower quickly before the next wave arrives.  Spending gems is good if you need to quickly level up a tower and can cost anywhere from one to three gems per level, again depending on the tower’s current level.  However, this means that it’ll take more time to research better towers, so you have to ask yourself if it’s worth the tradeoff.

As for the stages themselves, the early stages start out with ten waves while later stages have twenty.  As each wave progresses, you can check the progress bar at the bottom of the screen to see how close the next wave is to arriving.  Take note that the current wave doesn’t have to be over before the next wave begins, so there is a chance of the next wave beginning while you’re still dealing with the current wave, especially on harder difficulties.  Each stage you clear perfectly (where no enemies get through on any wave) you earn a rainbow.  These are used to progress to the other islands, opening up more stages to challenge. 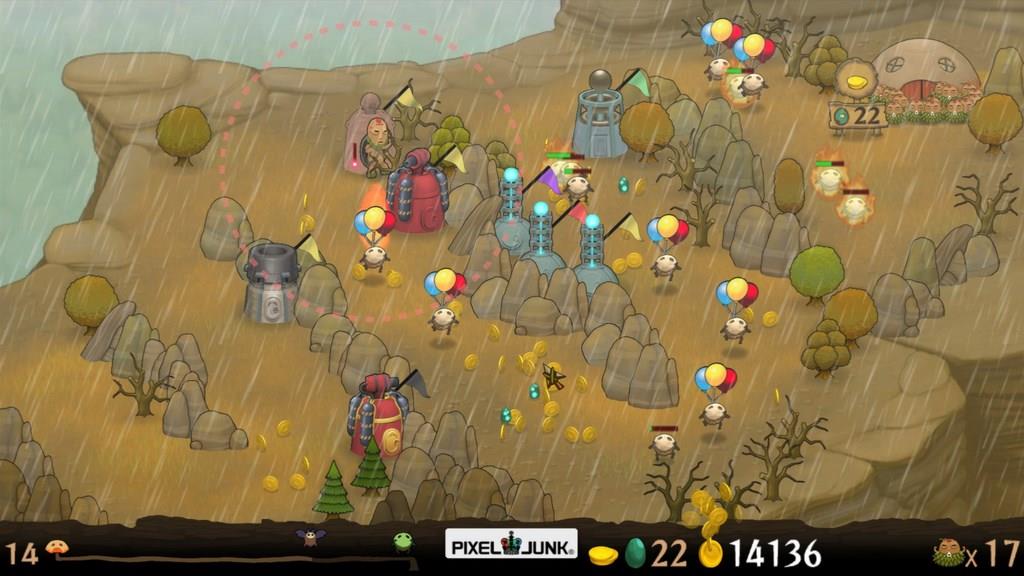 Something else that you can do to offer a little bit more of a challenge is to generate your own map.  Yes, you read that right.  One of the four islands on the map allows you to input any five letter word to have the game randomly generate a map for you to challenge.  I tried this with a SYTHR (a shortened version of Scyther) and the map I got was…well, kind of ridiculous to say the least.  The monsters’ goal was in the center of the map, there were three entry points (top-middle, left-middle, and right-middle), and not a lot of trees that I could put to actual use.  Plus it was hard to pinpoint the monsters’ paths as they walked around, so quite a few times I had towers in places where they couldn’t even touch the monsters.  If you’re a pro at tower defense games,you'll still get a good challenge out of this.

As PixelJunk Monsters Unlimited is a tower defense game, there’s not much more to talk about.  When I first started on Regular difficulty I was able to get through the tutorial stage and the first two stages after that without many issues.  After that I had issues getting through any other stage I had open so I went back and dropped the difficulty down to Casual.  Thankfully this doesn’t over-write your progress, but you have different stats depending on which difficulty you played on (i.e. how many stages you cleared, time taken, etc.).  On Casual however, things were much easier.  Now I know that since it’s the easiest difficulty it should be a lot easier, but the rise in difficulty for Regular felt a little steep.  However, I had to keep in mind while reviewing this that Tower Defense isn’t my best genre, so a lot of the difficulty curve was probably in my own skill.

When it comes down to it, PixelJunk Monsters Ultimate is a pretty fun game.  If you’ve never played a tower defense game before and you decided to pick up PixelJunk Monsters regardless of which platform you get it for, definitely start out with Casual difficulty.  The monsters move slower, are a little weaker, and come in less numbers.  Plus you get more time between waves to build and maintain your towers.  Once you’ve spent a lot of time with Casual difficulty and you feel like you have the hang of things, Regular difficulty will still provide a good challenge for you.  If you have played a lot of tower defense games in the past, you’ll still get some enjoyment out of PixelJunk Monsters Ultimate.  Being able to randomly generate a map provides a nice challenge to veterans of genre and basically gives you nearly an unlimited number of maps to challenge.  On the whole, this is a fun game for veterans and newcomers to the genre.
PixelJunk Monsters Ultimate is a fun game in the tower defense genre, but if you’re new to the genre I’d recommend sticking with Casual difficulty for a while as you’d likely get overrun on Regular difficulty. Still, if you’re looking for a fun tower defense game, this is one worth picking up.