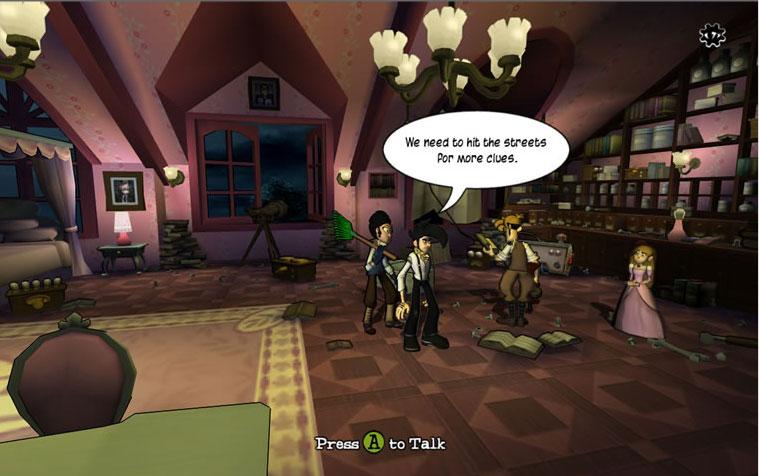 Penny Arcade Adventures: On the Rain-Slick Precipice of Darkness

Written by Cyril Lachel on 5/29/2008 for PC
More On: Penny Arcade Adventures: On the Rain-Slick Precipice of Darkness
Before we dig too deep into Hothead Games' newest Xbox Live Arcade game, I have a confession to make. As hard as I, I just can't seem to get into Penny Arcade. Don't get me wrong, I still love attending the yearly Penny Arcade Expo, I think that Jerry Holkins (Tycho) and Mike Krahulik (Gabe) are extremely nice guys, and I have found myself agreeing with the site on more than one occasion. But there's just something about their regular web comic that I don't find entertaining. It's not a lack of trying, I assure you; it's just not my cup of tea.

Realizing this I wasn't sure what to think about their first game, simply called Penny Arcade Adventures: On the Rain-Slick Precipice of Darkness - Episode 1. I knew that I dug the name and liked what I saw at last year's Penny Arcade Expo in Seattle, Washington, so I was more than willing to give them the benefit of the doubt and give this Xbox Live Arcade title a day in court. I'm so glad I did, because not only is Penny Arcade Adventures a fun turn-based role-playing game, but it's also laugh-out-loud funny from beginning to end. It's not without a few problems, but in a small way this game has proven to me that Gabe and Tycho can, in fact, be funny.

While it's easy to call this first episode of Penny Arcade Adventures a role-playing game, that probably wouldn't be the best way of describing this quirky little title. In fact, the game feels more like a cross between the classic graphic adventures of yesteryear (Sam & Max, The Secret of Monkey Island, etc.) and a traditional Japanese RPG. If that sounds like an alarming combination then you aren't alone, but as you get used to it you'll realize that this is a natural pairing. Heck, the pairing fits so much that it surprises me that nobody had thought of it first.

On the Rain-Slick Precipice of Darkness - Episode 1 takes place in a 1920's New Arcadia. The game tells the story of an average homeowner who gets swept up into an epic battle between good and evil after he (or she) gets their house destroyed by what looks like a large robot. Before long our hero (complete with a killer rake) is teaming up with Gabe and Tycho, the two proprietors of an investigation agency called Startling Developments. Together this team solves cases, battles evil characters and, with some luck, will find a place for our now-homeless hero to live.

This episode of Penny Arcade Adventures is split up into a couple of different tasks. For much of the game you're going to be walking around one of the three environments (which include your recently destroyed street, a hobo-infested city and a carnival on the peer). But as you progress through the game you'll discover that you're spending almost as much time battling some of the nasty (and often comical) villains, including fruit sodomizing robots, mimes, hobos and even a barbershop quartet. Hopefully you like turn-based action and solving cases, because that's what you're going to do in the Penny Arcade Adventures.

The most intriguing part of this game comes from the turn-based combat, which manages to offer a fresh coat of paint to this long-running genre. In battle each of the three characters has three different time-released things they can do - use and item, attack your enemy, or use a special attack. Basically the idea is that each option requires a certain amount of time for it to fill up and be selectable, so you can use your items without waiting too long, but if you want to use your regular or special attack you will have to spend a few extra seconds waiting for those to be time-released. This may sound complex, but I assure you after a battle or two you will be fighting robots, mimes and hobos like a pro.
While there may only be those three options, you'll quickly discover that there's a lot more depth to the combat than you might initially expect. For example, if you time your blocks correctly you can take almost no damage and perform a powerful counter attack. And that's not all, if you wait long enough your team will be able to perform a three-person special attack that is sure to kill anything in your path. And let's not forget about the three characters you can "summon". These summons may not be as visually stunning as the ones found in the recent Final Fantasy games, but they do add a lot to the combat. And really, who can resist summoning a cat that sits there washing itself and inflicts 1hit of damage on your enemy?

Unfortunately the cases aren't nearly as original as the combat. This first episode features 10 different cases to complete, almost all of which involves you helping somebody find something, battle something or resolve something. While some of these cases are funny, none of them are as involving as I would have expected from the people involved. At times the only thing entertaining about the cases is the incredible dialog, all of which is funny and crude.

In fact, it's the writing that sets this game apart from all of the graphic adventure/role-playing game hybrids out there. If Gabe and Tycho are good at anything it's creating snappy dialog that is simultaneously intelligent and foul. The conversations these characters have is always snappy, even when they're talking about collecting urine, selling hobo meat and sucking the soul out of religious figures. And did I mention that it's foul? Considering the game's somewhat innocent look I was shocked to see how much profanity was used in the game. Right from the get-go this game is dropping four-letter words and making references to all sorts of things you can't say on television. It's definitely nice to see that the Penny Arcade guys didn't have to sanitize their product in order to fit it into an Xbox Live Arcade game.

For the most part the graphics look exactly like what you would expect from Penny Arcade, the characters are simple, the backgrounds are detailed with funny in-jokes and everybody has expressive reactions that fit perfectly with the comic strip. That's not to say that the visuals couldn't be improved, some of the 3D graphics are a little strange looking and you'll find yourself fighting the same characters over and over again.

And speaking of presentation, what happened to the audio? Outside of the narrator, there are no actual speaking roles in this game ... and even the narrator stops talking a quarter of the way through the game. All of the speech is presented using dialog bubbles, which definitely makes it feel like a comic strip, for better or worse. The minimal approach is also given to the game's music, which is non-existent in some parts of the game. There are sound effects, but it's awfully weird to play a graphic adventure without the usual audio tricks. This won't ruin your experience, but it is a bit odd to say the least.

The real problem with this game isn't the lack of voice acting or boring missions, but rather the fact that this game costs a whopping $20. Sure $20 is cheaper than your usual Xbox 360 game, but it's also five, ten, even fifteen dollars more expensive than every other game on the Xbox Live Arcade service. To make matters worse, for $20 you're getting a game that only lasts five to six hours, with little to no replay value. This price point is disappointing to say the least, especially when the funnier and more engaging Sam & Max episodes are only running $8 for almost the same amount of gameplay. The price point is at such a point where it goes from being an impulse purchase to something you have to debate spending the money on, which was never the idea of the Xbox Live Arcade.

If you can get over the shock of the price tag then you will find an exciting role-playing game with a surprising amount of depth. That's not to say that it's a perfect game, but it's a fantastic first episode in what will hopefully be a long-running series. I have no idea where this game will eventually lead, but I can assure you that I'm ready to see what Gabe and Tycho can dream up for the next episode ... whenever that comes.
Penny Arcade Adventures may be the most expensive game on the Xbox Live Arcade service, but that shouldn't keep you from discovering a wonderful adventure full of snappy dialog and addictive combat. It may not be the best graphic adventure series currently being made, but it's well worth your time and money!