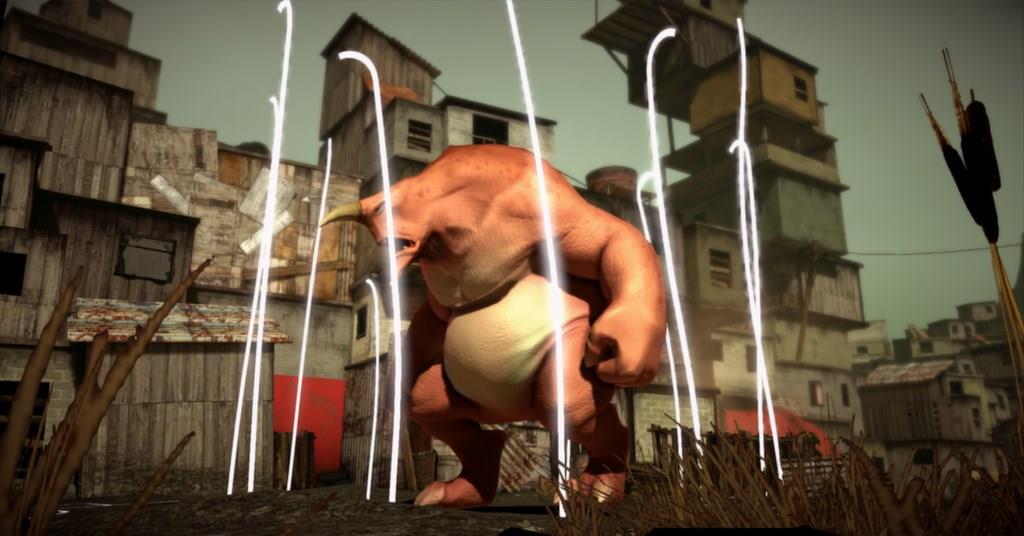 Written by Travis Huinker on 6/24/2013 for PC
More On: Papo & Yo
Papo & Yo from developer Minority may seem, on the surface, an ordinary game that contains platforming and puzzle-solving segments and an adventure about a young boy and a giant orange monster. Soon players discover, however, that everything is not as it seems and that the world around them is beyond normal. Papo & Yo explores issues such as abuse and alcoholism through its narrative and gameplay components with the power of imagination. Originally released on the PlayStation Network, Windows users now have a chance to play through the game with enhanced graphics and support for Steam achievements and cloud saving.

A boy and his monster
The game's protagonist Quico appears in the game world without much of an introduction and soon discovers his best friend that's appropriately named Monster. As he further explores the world with Monster, Quico befriends the mysterious Alejandra in addition to acquiring the use of his toy named Lula that functions both as a jet pack and tool for solving puzzles. The world that Quico explores resembles a South American favela that literally transforms based upon his actions and that of Monster. While they venture further into the world, not is all that it seems and Monster's alternate personality is revealed through one of the game's more dramatic scenes.

The game's narrative continually provides hints of the real issues that are being hidden by Quico's imagination. It isn't until the game's end that all the elements culminate in an absolutely satisfying and emotional conclusion. It's not often that a game provides the solution for completion that also warrants a great deal of reluctance to accept. As the credits rolled, the sadness eventually transformed into happiness and a true sense of accomplishment.

Storytelling through puzzles
The initial platforming and puzzle-solving components of Papo & Yo's gameplay aren't a huge departure from other games in the genre. The gameplay quickly becomes more involved and interesting, however, as elements are introduced that involve manipulating the environment to solve a variety of puzzles ranging from building a bridge from floating shacks to using Monster's belly as a platform for jumping to higher locations. While most of the platforming challenges and puzzles are unique, none of them were overly difficult to solve as the solutions usually didn't involve much input beyond simple activation or movement of environmental objects.

Rounding out to about three or four hours, Papo & Yo isn't an overly lengthy experience by any means. The overall value is lacking as there aren't many reasons for replaying the narrative except for completing all of the achievements. However, the journey of Quico and Monster are near impossible to stop playing until the conclusion is reached. While some of the platforming and puzzle segments are lacking in their execution, the overall experience from beginning to end is a worthwhile adventure that doesn't disappoint with either its narrative or gameplay elements.

A world created through imagination
From sprawling favelas interwoven with vibrant graffiti murals to handcrafted sound effects for each surface that the player runs across, the visuals and sounds of Papo & Yo combine to create a world that is an absolute joy to wander through in addition to being undoubtedly unique. One of the most stunning visual effects on display is how the environment can warp into different objects such as bridges and staircases. The effect continually reinforces that the world surrounding Quico is that of his imagination, which he uses to his advantage in solving puzzles and manipulating Monster.

The original soundtrack composed by Brian D’Oliveira and La Hacienda Creative is absolutely brilliant in execution as each song perfectly flows into one another. The final song alone deserves a high amount of praise as its combination of beautiful melodies and voice result in a flurry of emotions and reactions to the journey's conclusion. Put simply, Papo & Yo is a visual and auditory masterpiece.

The journey's conclusion
Few games reach the storytelling power of Papo & Yo and even fewer dare to explore serious issues such as abuse. The journey of Quico and Monster has its happy and sad moments and eventually concludes with an ending that players wont soon forget. While some puzzles are lacking in their execution and replay value is stretched thin with achievements, the majority of the gameplay experience is memorable and worthwhile for seeing the adventure through to its conclusion. The strong presentation further reinforces Quico's world created through imagination, one in which players will have a difficult time leaving after the credits roll. Papo & Yo is strongly recommended as it deserves a place in every gamer's collection.

Papo & Yo is available now for Windows PC and PlayStation 3.
A powerful narrative, imaginative puzzles, and strong presentation combine in Papo & Yo to result in one of this year's best gaming experiences. The emotional journey of Quico and Monster that comprises Papo & Yo leaves a long-lasting impression well after its conclusion.