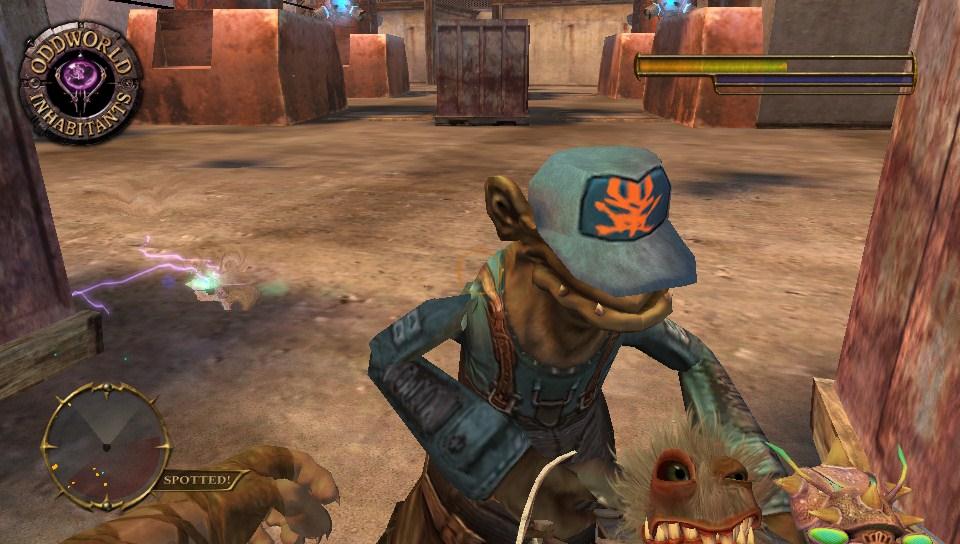 Written by Cyril Lachel on 2/6/2013 for Vita
More On: Oddworld: Stranger's Wrath
Between the recent releases of Persona 4 Golden and the Metal Gear Solid HD Collection, PlayStation 2-era games are quickly making the PS Vita their new home.  Now comes Oddworld: Stranger's Wrath, yet another forgotten last-generation gem getting the overhaul treatment on Sony's new handheld.  And even though it's a little outdated by today's standards, this rootin', tootin' western exists in a bizarre world that you can't help but love.

If Django Unchained put you in the bounty hunting mood, then Stranger's Wrath is the perfect companion piece to Quentin Tarantino's Oscar-nominated action film.  You play Stranger, a rugged cowboy-type with very little to say.  He's on a quest to earn 20,000 moolahs in order to have a mysterious medical procedure.  To do this he takes on a series of bounties, forcing him to travel all over Oddworld bringing criminals to justice.

This setup has you battling all sorts of stereotypical bosses.  You get the sniper battle, an explosives expert, a trio of killers, a big game hunter and more.  The levels are also diverse, giving familiar movie locations an Oddworld makeover.  And even though this is an open world, the Stranger won't need to do much backtracking.  In fact, the game is constantly sending the Stranger to new areas of the world.

Like everything in this world, the Stranger has a few quirks.  For one thing, he's not a big fan of using real ammo.  Instead he opts for live ammo.  I'm talking about small critters he picks up on his journey and loads into a double barrel crossbow.  Although a little different looking, these "bullets" aren't all that different from what you're used to.  The Thudslugs act like a shotgun, providing a powerful hit at close range.  The Boombat is the missile launcher.  And fans of assault rifles will want to stick with the Stingbee ammo.

Not all of the critters fit as neatly into the tried and true first-person shooter weapon types.  Fuzzles, for example, lay down traps that keep the enemies busy.  The Howler Punk is loud and obnoxious, instantly incapacitating a large group of enemies.  You'll also want to use the Bolamite spider, a creature that wraps enemies up in tight webbing.  These weapons allow the Stranger to get close enough to his opponent to suck him into his trap.  The poster may say "dead or alive," but a good bounty hunter knows that his prey is always worth more with a pulse.

Stranger's Wrath flirts with 3D platforming, though it's really an afterthought when compared to the boss battles.  To help navigate this unique world, players have the luxury of switching between first- and third-person camera positions, so there's never an excuse to miss a jump or get the right shot.  Switching perspectives is as easy as double-tapping any part of the PS Vita's touch screen and both allow for different types of combat.  It's a nice mix that I wish more first-person shooters would embrace. 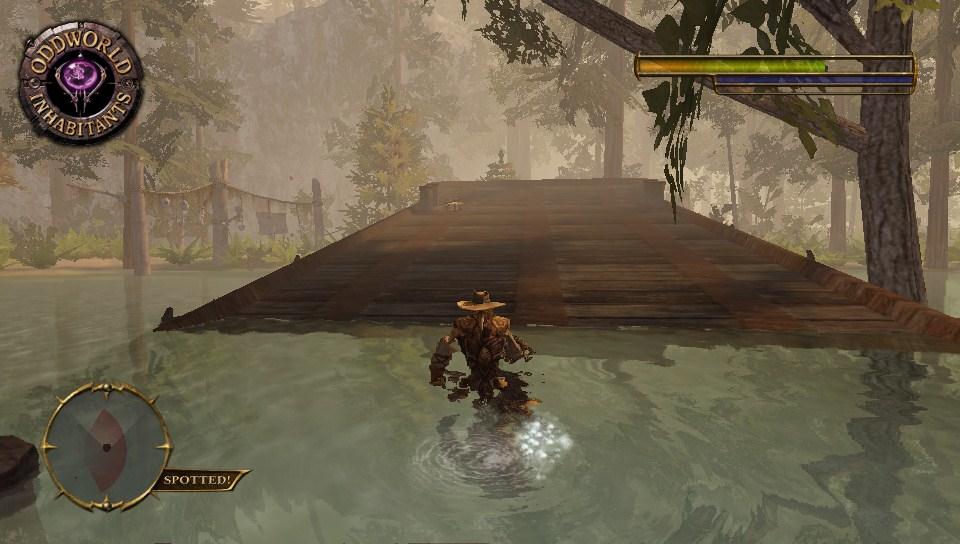 As a first-person shooter, Stranger's Wrath is easily the best game of its type on Sony's handheld.  Granted, the competition is Resistance: Burning Skies and Call of Duty: Black Ops Declassified.  The emphasis on whimsical ammo types and fantastical bosses may not appeal to traditional FPS fans, but there's a very serious action game underneath that odd exterior.  On the other hand, the third-person platforming isn't nearly as interesting.  There aren't many puzzles and most of the third-person challenge comes from the lack of a proper map.

Just as I started to wonder if the whole game was about defeating random bounties, Stranger's Wrath takes a sharp tonal turn.  The entire final act is more akin to modern Call of Duty games, with the hero always pushing forward through a linear set of levels.  There are explosions all over the place and the good-natured atmosphere of the first two-thirds has been replaced with non-stop action.  Even with the stakes ratcheted up, I was left a little cold by the traditional FPS ending.

The game's jarring final act also shined a light on Oddworld's other major flaw.  For much of the game I felt overpowered, often to the point of running into cheap deaths.  For most of the game you're only able to upgrade a few ammo types and the armor selection is non-existent.  And then, right at the very end of the game, the Stranger is given three brand new armor upgrades and more powerful firepower.  Where was this the rest of the game?  I can understand leaving something for the end, but it would have been nice to spread out those armor upgrades a little more evenly. 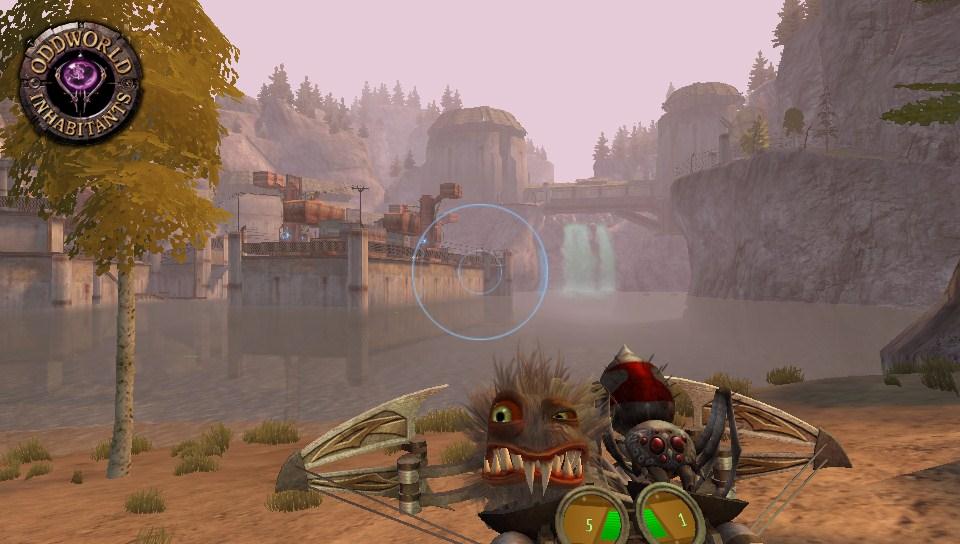 Speaking of cheap deaths, a lot of the problems I had involved bad checkpointing.  Like so many games of that era, Stranger's Wrath can go quite a few minutes without hitting a check point.  I was forced to contend with multiple tough sections before hitting the magical barrier that saved my progress.  There is a quick save button, but this felt more like a Band-Aid than a solution.  It felt like cheating every time I made a few steps and hit the quick save.

Thankfully the game is good enough to make me put up with some of the pacing and difficulty issues.  The world is constantly interesting and there were a few parts where I had to pause the game because I was laughing so hard.  The landscape and overall tone of the game reminds me of Borderlands, only with an emphasis on live ammo and cowboy cliches.  It's a charming world full of memorable characters and a twisted storyline.

Forget that this was originally an Xbox game; Stranger's Wrath looks phenomenal on the PS Vita's screen.  The character models are sharp and the world is teaming with life.  It doesn't hurt that the game came out at the tail end of the system's life, giving the developers a chance to push the hardware to the limits.  Even more impressive are the lengthy cinemas.  The art direction is overflowing with personality. 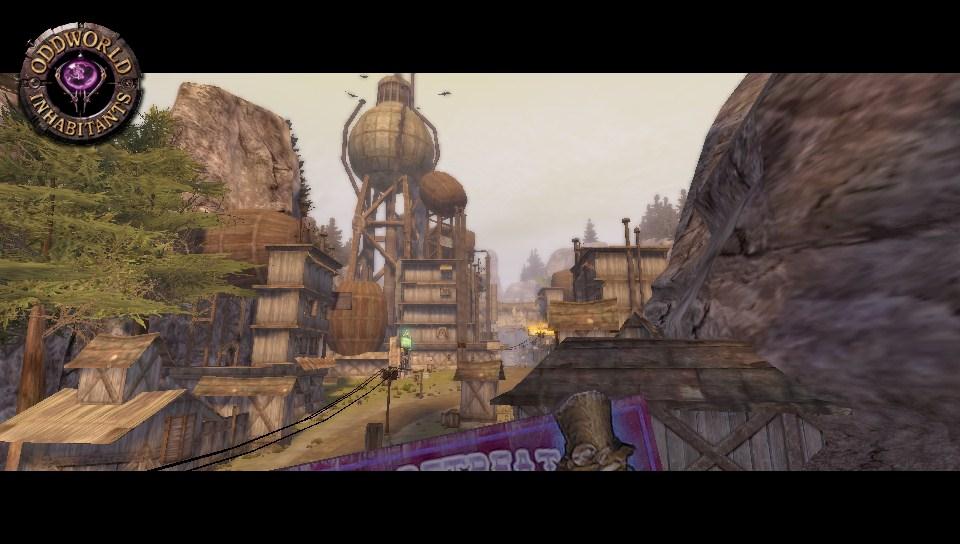 Unfortunately, I do have a few issues with the way the game plays on the PS Vita.  The biggest problem involves Sony's back touchscreen, a problem I have complained about in numerous other Vita reviews.  When in first-person mode, the back touch screen acts as your punch button.  This means that every little accidental move or swipe will trigger the punch animation.  That's not so bad when you're out in the middle of nowhere, but it can be deadly in the middle of a firefight.

Later in the game, things go from bad to worse when the Stranger is given a pair of binoculars.  I found myself accidentally switching into the close-up mode and getting into irreversible trouble.  Accidentally punching the air is one thing, but getting stuck with the binoculars made the final act even more unbearable.  Sadly, there's no way to customize the layout or turn off the back touchscreen.  Even if they couldn't turn the whole screen off, some of these actions should have been done with double and triple tapping.  This would go a long way to relieve most of the frustration I felt with Stranger's Wrath.

Still, even with these issues, the world and story is interesting enough to recommend.  There aren't a lot of games like this on the PS Vita, especially for the dirt-cheap asking price of $15.  And much like Persona 4, Stranger's Wrath is a forgotten gem that most modern players haven't touched.  Oddworld: Stranger's Wrath is an easy game to love...quirks and all.
Django Unchained certainly got me in the mood for Oddworld: Stranger's Wrath. This bizarre action game stars a strange gunman on a quest to earn money by turning in bounties. Even with a few outdated quirks, this fourth (and final?) Oddworld delivers an exciting storyline full of memorable characters. It's just like Tarantino's newest action movie...only without saying the N-word even once!