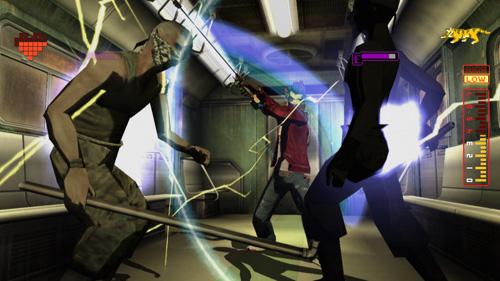 Written by Matt Mirkovich on 2/6/2008 for Wii
More On: No More Heroes
I’ve had my Nintendo Wii since February ’07, I didn’t buy my first game (outside of Wii Sports) until Super Mario Galaxy. Now I have my second game, No More Heroes, and I can’t put my Wii-remote down. I’ve already played through the entire game on Mild difficulty, and I’m playing it again on Bitter now. No More Heroes has been everything I wanted in a Wii title, it’s got great game play, looks fairly good, is incredibly stylish, has some of the best dark humor and writing I have experienced in a game, and best of all, it doesn’t abuse waggle. If there was one thing this game had to do wrong to totally lose me it would have been to make motion controls ridiculous and overbearing, and thankfully that is not the case. Instead, No More Heroes is a game that the “hardcore” people have wanted on the Wii since it first came out instead of some hackneyed mini-game fest.

From the get go, No More Heroes makes a clever introduction to the anti-hero Travis Touchdown, giving a quick recap of the events that led to his place as number eleven on the list of assassins, by taking out the drifter Helter Skelter, who was cool, well-dressed and packin’ heat and looked like he had a victory in the bag. From there it’s a wild ride around the fictional town of Santa Destroy led by Sylvia Christel as Travis makes his way up the ranks of the United Assassin’s Association, in hopes that his otaku fantasies will come true and she’ll sleep with him. Taking on the other top ten assassins will put Travis up against some crazy characters like Destroy Man, post-man by day and assassin by night, with over the top attacks like the Destroy Cannon, or the Destroy Spark Then there is Bad Girl who stands out from the bunch with her Gothic Lolita style and bloodied baseball bat and penchant for drinking beer on the job. Each character has their own quirks about them, some a bit odd, and others downright disturbing to the point that the game could have been given an AO rating according to a fourth wall breaking monologue. The writing in the game is great, and once the story comes full circle you see that the journey was well worth it.

The acting job in this game is also superb, with Travis Touchdown voiced by Robin Atkin Downes, and other characters voiced by some other prominent voice talent like Kari Wahlgren (known for her work as Ashe in Final Fantasy XII and other games/anime). This is a game that could have been terrible if the acting wasn’t done well, but the effort put forth by Mr. Downes and the rest of the cast puts this up there with some of the best voice jobs in all of gaming. The rest of the audio however is a bit of a mixed bag. A lot of music tracks in the game that are used when you’re out cutting a swath of destruction are just remixes of a main battle theme. Thankfully the boss music offsets this by having interesting tracks that make most of the fights memorable, like the battle with Dr. Peace where, well I’ll just say they use the song again for the credits it is that good. Also I think Suda 51 should be expecting a call from Mr. Lucas soon telling him to give back those lightsaber sounds.

Another thing that will be immediately striking is the art style for No More Heroes. It is quite awesome, which I would expect from Yūsuke Kozaki; whose previous works include the anime Speed Grapher (which to call bizarre would be a massive understatement). Graphically, this game is rough, to say the least. Even running in 480p this game has jaggies to spare, and a terrible draw distance to boot. The frame-rate is also sketchy, with hiccups when things get really out of hand, and then randomly drop when running around Santa Destroy. The style of the game keeps everything interesting though, from the copious amounts of blood to the choice of locations for the battles. One takes place in the middle of a baseball stadium, another out on the sandy beaches of Santa Destroy.

No More Heroes wouldn’t be much fun if it had crap game play; and while it doesn’t make things easy to get in to the meat and potatoes of this game, it still manages to be entertaining, most of the time. See someone thought that amidst all the hacking, and slashing, and murdering, it would be nice if Travis did some day to day odd-jobs, to help pay the bills. So this winds up with him doing lame things to earn cash, like mow lawns or pump gas. These left me with that sour feeling that I was being punished to make it through the game. The upside to this is that once you complete these odd-jobs you can get back in to the killing game to make some cash, which is far more engaging if you ask me. One thing that made me happy was that once I was finished with the game and started another play-through, the need for these mini-game tasks was severely diminished, leaving me with the core hack and slash game that I desired so much to play. Though occasionally this game does throw some curveballs your way with some common and uncommon game play conventions, let’s just say I didn’t expect to find myself swinging the Wii-remote like a baseball bat in a game like this.

Once you get the game rolling it gives you a very lengthy tutorial that lets you know what Travis has at his disposal. Most combat revolves around the use of the A or B button which is for your common strikes. And as you get deeper in to the game you start making use of wrestling moves with movements of the Wii-remote, or straight up kills with the beam-saber that leave people torn in half. This use of the Wii-remote is frequent, but it does not feel over-bearing, it is at a welcome pace and I don’t need to use the waggle motions for every little thing. After a while things take a flow and pace similar to that of the Devil May Cry series where it just comes down to being as stylish and combo-driven as possible, all the while pulling out bad-ass dodges when things get a little hairy.