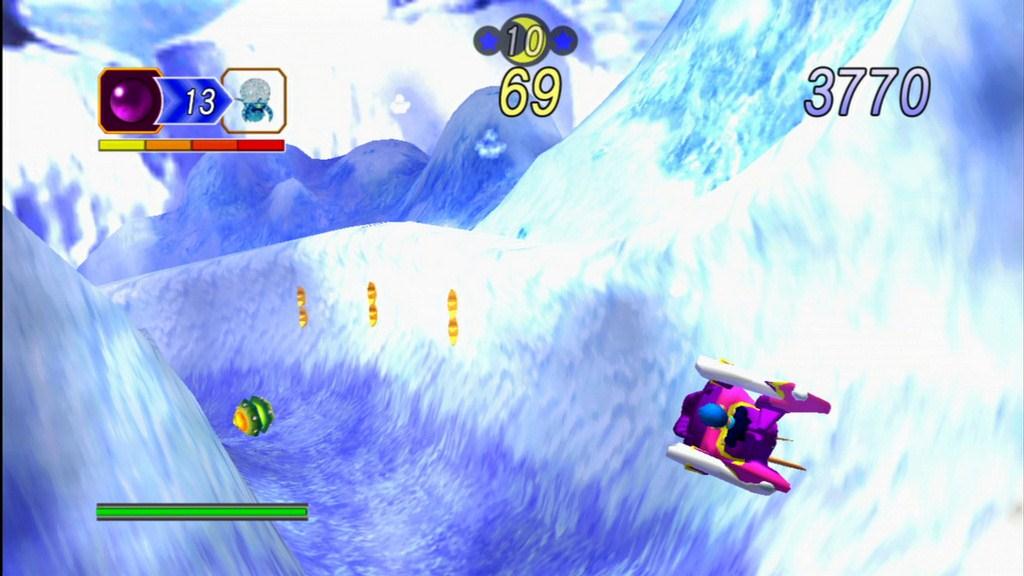 Written by Cyril Lachel on 10/10/2012 for PS3
More On: NiGHTS into dreams
After catching lightning in a bottle with Sonic the Hedgehog, Sega intended NiGHTS into Dreams to be the next big thing for their fledgling Saturn.  Sega was so confident in its success that they decided to bundle it with a brand new analog stick-enhanced controller.  Forget about the Nintendo 64 and Sony PlayStation, this was going to be the game that took the 32-bit system to the next level.

Unfortunately, NiGHTS into Dreams didn't quite live up to Sega's expectations.  For years the game seemed like it was lost to time; a relic of the past that would never again see the light of day.  Despite game journalists like me singing its praises, Sega clearly wasn't interested in keeping this franchise alive.  The one glimmer of hope was the PlayStation 2 port, and even that was confined to a Japan-only release.

Just as it looked like Sega was done with NiGHTS, the company surprised everybody with a Wii sequel.  And now, five short years later, they're finally getting around to re-releasing this long-forgotten gem on the PlayStation 3 and Xbox 360.  This will be many gamers first time with the much hyped platformer.  I have a hunch that a lot of people are going to be left scratching their heads wondering why this was a big deal.

NiGHTS is one of those games that purposely keeps you at arm's length.  No matter how hard you try to get close, it will thwart your advances at every turn.  It refuses to play by convention to the point of frustration.  And yet, despite its deliberately impenetrable exterior, it turns out to be an incredibly moving experience with a lot of truly great ideas you don't often see in this style of game.  Sadly, few will see what makes NiGHTS into Dreams so memorable.

You play either a young boy (Elliot) or girl (Claris) as they explore a 3D dreamscape.  All of their orbs are stolen at the beginning of each stage, so it's up to them to traverse the area and regain what they lost.  Thankfully they aren't alone.  By going to the temple, Elliot and Claris will be magically transformed into a third character, a flying jester named Nights.

Although it sounds needlessly convoluted, the basic goal is the same from level to level.  As Nights, you fly around a set course collecting blue orbs, defeating enemies and spinning through hoops.  Eventually you'll come across a floating platform that will only be destroyed if you have enough blue orbs.  Once you've collected enough orbs and destroyed the floating platform, you're free to speed back to the temple and move on to the next part of the level.  Each stage has four different sections, each with their own set paths. 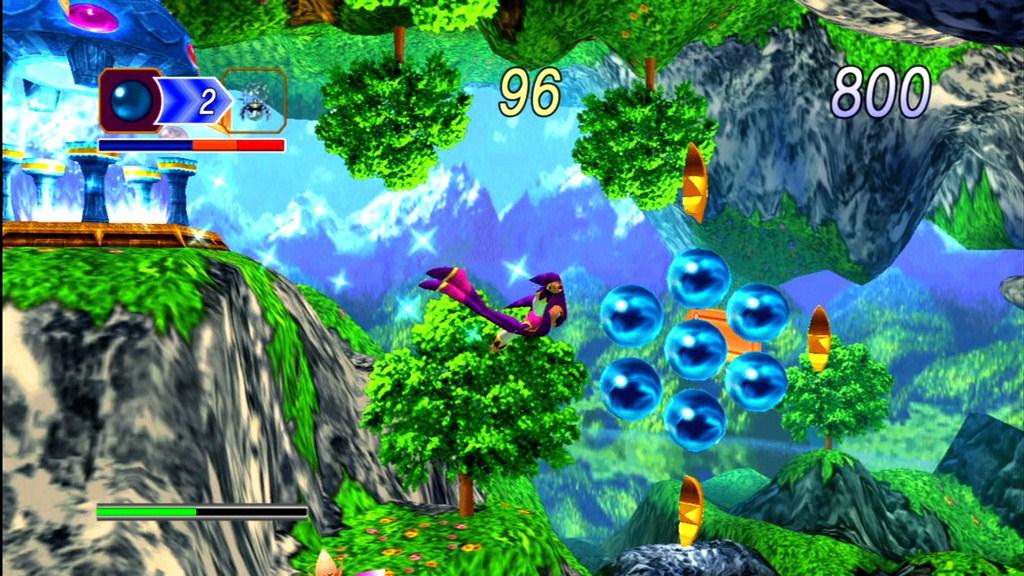 While this may sound easy, the rub is that you only have two minutes to complete each stage.  Sometimes it will take two or three laps around the world to collect enough blue orbs to complete the stage, which means you'll be fighting the clock to get back to the temple.  Run out of time and you'll revert back to the teenager you started as.

Once you've completed all four parts of the stage, you'll be thrown into a large arena where you'll take on a boss.  Unfortunately, this is where the game starts to break down.  Each boss is different, which means that you'll have to figure out their weakness and defeat them in less than two minutes.  Fail and you go all the way back to the start of that stage.  Even when I knew how to defeat the boss, I still found myself having to replay levels multiple times.

The difficulty spike is even more jarring when you discover how easy the regular stages are.  The bad guys are usually pretty easy to avoid and there's nothing challenging about collecting blue orbs.  Even if you run out of time, you are barely penalized for your mistake.  We go from a peaceful zen playground to a frustratingly vague boss fight.  This is the kind of thing Sega could have fixed by adding a checkpoint, but the emphasis here was making the game look better, not play better. 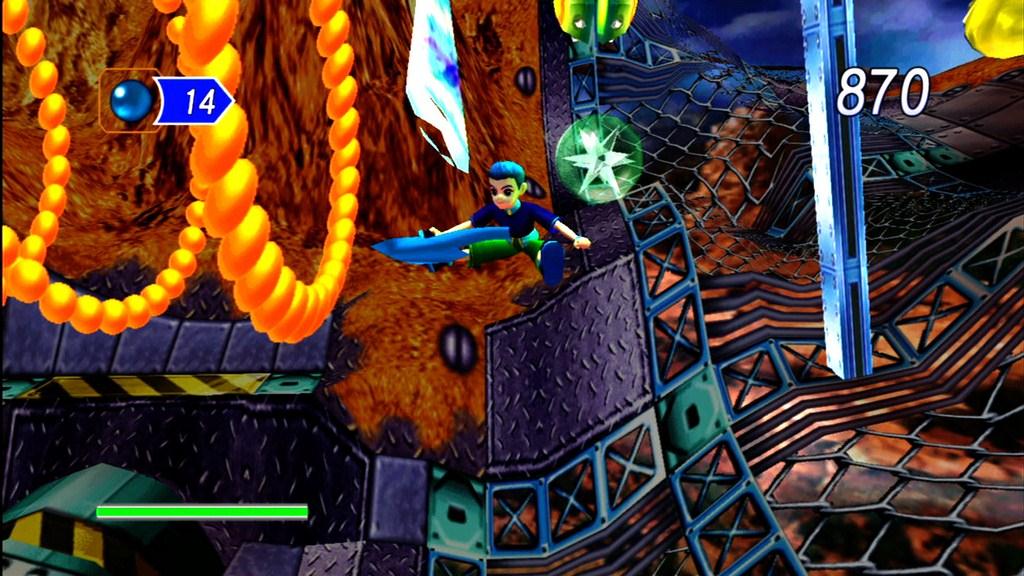 Even if you can get past the spikes in difficulty and simplistic gameplay, you'll still hit a wall without knowing.  You don't unlock all of the levels by simply beating bosses; some levels will only be opened by earning certain rankings.  You'll see locked levels, but there are no clues on how to open them.  These days, people can turn to the internet for the quick answers, but I'm dumbfounded by how bad the user interface is in this 1996 Saturn port.

Once you've made your way through the entire dream, you'll unlock one of the coolest bonuses of all time.  It's Christmas NiGHTS, a holiday-themed expansion pack.  Originally distributed in partnership with a magazine company, Christmas NiGHTS offers a plethora of snowy mountains and holiday bosses to fight.  It also brings Sonic the Hedgehog into the mix.  This is an especially good deal considering the game was never sold at retail and is surprisingly rare these days.

The graphics are good, though certainly outdated.  The HD models aren't very realistic, often resembling toys.  The worlds are full of pop-ins, even though the land around them isn't that expansive.  Considering this was a Sega Saturn game (and not a Dreamcast game, like all of Sega's other recent re-releases), NiGHTS' presentation is commendable.  Even when you're baffled by the boss fights, the actual art design is endearing and full of whimsy.  The dreamscape world they've created is beautiful and diverse, but part of me would love to see these areas redrawn using the full power of the PlayStation 3's hardware.

NiGHTS into Dreams is not answer to Sega's Super Mario 64; it's not a game that will change the way you look at video games.   It's an interesting take on a platformer with a truly unique sense of style.  The price is right, even if some of the design decisions seem archaic by today's standards.  Whatever you do, don't sleep through NiGHTS into Dreams.

As a Saturn game, NiGHTS into Dreams under-delivered. Sixteen years later it's easy to see why, but that shouldn't keep you from playing through this bizarre dreamscape. Just be ready for some frustrating boss fights and linear flying stages!