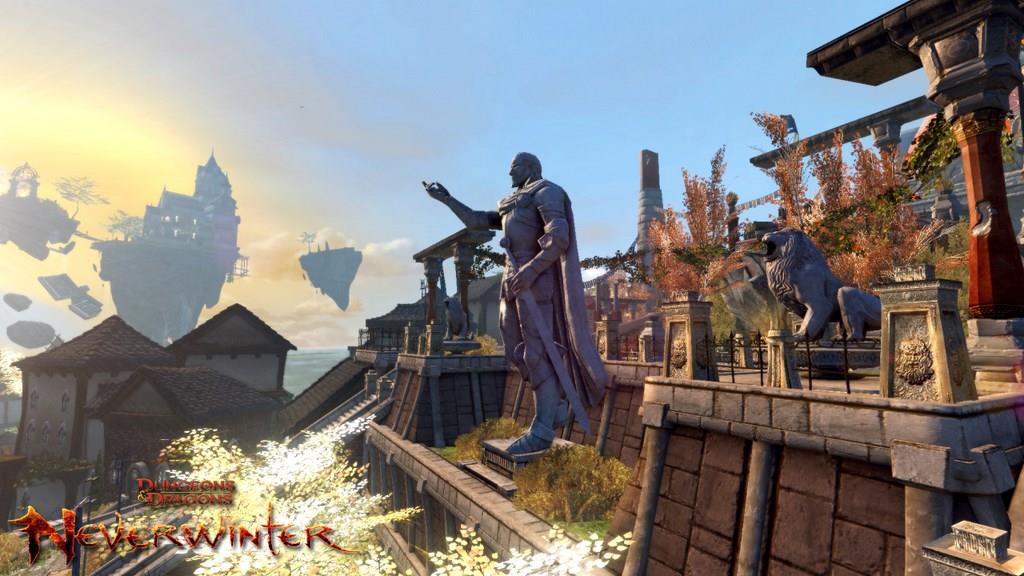 Written by Travis Huinker on 9/6/2013 for PC
More On: Neverwinter
Neverwinter, from developer Cryptic Studios and publisher Perfect World Entertainment, is a free-to-play massively multiplayer online role-playing game set in the Dungeons & Dragons universe, or, more specifically as the game's title suggests, in and around the Forgotten Realms city of Neverwinter. At the game's beginning, players select from the standard fantasy races, from dwarves to elves, and a variety of classes, including the normal range of some that specialize in different weapon types while others prefer the use of magic. After a brief introduction to the various gameplay mechanics, players arrive in the city section of Protector's Enclave, which serves as the primary hub for partaking in quests, participating in player-versus-player combat, and buying and selling items at a wide assortment of market vendors.

The fantasy formula
While many free-to-play games lack complete narratives, Neverwinter provides a lengthy adventure that is complete with voiced narration and cinematic scenes. Players with no prior knowledge of the Forgotten Realms or the city of Neverwinter will have little to base the narrative on except for journal entries and books found in the game's environments. The narrative is the typical fantasy affair of good versus evil with a few twists thrown in along the way, yet much of the dialogue can be ignored as nearly every quest involves traveling to specific locations and either slaying monsters or collecting a set number of items. The narrative's real purpose is to group players together for dungeon raids, boss battles, and introducing them to primary gameplay mechanics such as player-versus-player combat and custom quests created by players in the Foundry.
​
Just one more quest
Put simply, there's a lot to do in the world of Neverwinter. A never-ending supply of both official and community-created quests always ensure that players are busy fetching items or slaying monsters. In following the standard role-playing gameplay mechanics, players partake in both individual and group quests to earn experience points and loot, and ultimately level their character with skill points and such. Those feeling competitive can join in various player-versus-player matches that have players battling for control points in an assortment of arenas. Players can also enter queues to await being placed in groups for completing cooperative dungeon instances.

While the game's battle system contains all of the standard mechanics found in other role-playing games, the action in Neverwinter is far more exciting as all of the combat animations are fluent and frantic. Most role-playing games suffer from lackluster combat that usually moves at a snail's pace. Neverwinter on the other hand employs a frantic battle system that allows for players to frequently use their associated number key skills in addition to dodging and other special actions. Aside from the entertaining combat system, the gameplay suffers slightly from encounters with often mundane enemies that don't employ much strategy other than standing in the same location. Boss battles with a group of fellow adventurers are far more enjoyable experiences as players work together in overcoming challenging scenarios.

Outside of battle, players can work on their crafting skills or pursue the auction market for buying or selling items, as well as browsing the selection of featured quests created by players. Aside from the game's campaign, players can browse from a selection of quests that others have created using the in-game Foundry tool. Quests created in the Foundry can be rated by other players, as well as the ability to donate gold to the creator. The Foundry is a great addition to the game as players will have new quests appearing daily ensuring for the consumption of many gameplay hours.

Money versus time
As Neverwinter is a free-to-play title, many potential players ask the same question regarding the game's microtransaction system. While the game does employ its fair share of occasions in which the completion of tasks could be accomplished quicker with the aid of purchasing premium points. Even with the continually advertised premium items such as special mounts or character apparel, none of the content creates disadvantages for other players. As with other free-to-play models, players themselves have to decide between the value of their time versus spending money for instant gratification. While a flaming horse mount may look spectacular in-game, it's not in any means required to experience the game's overall content.

Identity crisis
The visual presentation of Neverwinter isn't bad by any means, but the largest problem is simply its lack of identity. From the monsters to the locations, nothing seems unique or even that interesting. There isn't much variety to the exterior and interior environments either, which result in an overall lackluster appearance. Yet, some designs do stand out, such as the primary city hub and some of the various loot items.

Fortunately, the game's actual performance makes up for the design as the game runs smooth without any sort of crashes or server issues. The interface is one of the best around for free-to-play titles, with an overly simple layout to navigate, in addition to clear and minimal icons. Sparkly breadcrumb trails can also be toggled to make navigation between the city hub and quests a simple and quick process. The polished presentation and easy-to-use interface make for a dangerously-addictive experience for partaking in an array of quests.

Twenty-sided dice not included
Neverwinter enters a crowded market of free-to-play games, many of which have a similar fantasy theme. Yet, the Dungeon & Dragons-inspired Neverwinter is one of the more polished and content-rich online games available. The fluid combat combined with a near-endless amount of quests to complete ensure that players will be kept interested and busy for quite sometime. Neverwinter stands apart from other free-to-play games by not only providing a highly-polished gameplay experience, but one in which players can create their own adventures and ultimately become the dungeon masters themselves.

Neverwinter is available now for free and requires the use of Perfect World's Arc software.
Neverwinter is one of the best free-to-play games this year, with its fluid combat, extensive amount of quests, and Foundry tool in which players can create their own adventures. Most importantly, premium points and items don't affect the game for those who choose to adventure on the free route. Role-playing fans owe themselves an extended journey to the world of Neverwinter.