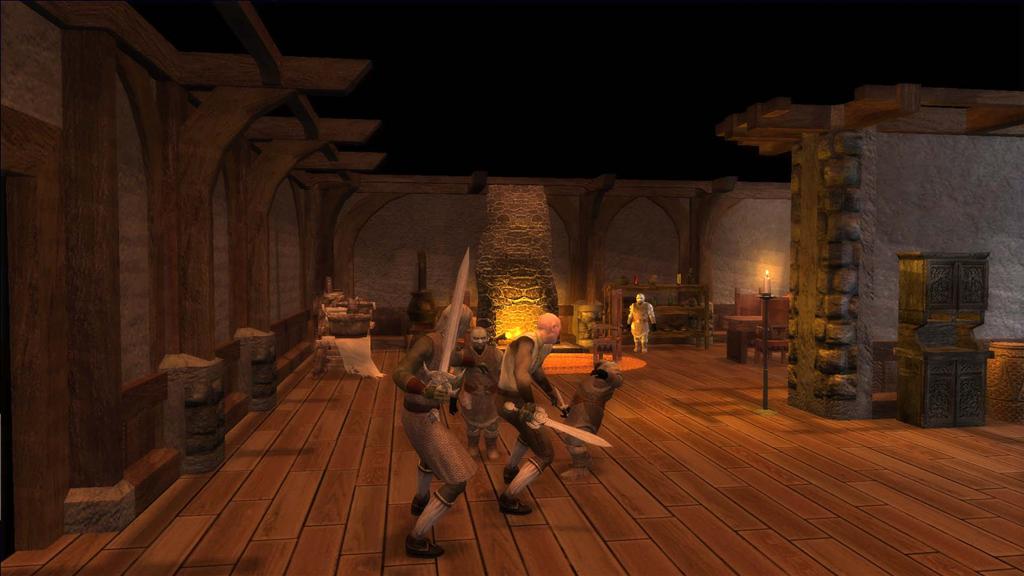 Neverwinter Nights is a game that's just got a massive following. It wasn't the first time you could create new content or DM a game live but it was the most successful one. A second iteration is about to be set forth and the anticipation for the game is off the charts in the RPG world. Can the folks at Obsidian create a worthy follow up? John talks with Senior Producer and one time Virgin Interactive interviewee Ryan Rucinski about Neverwinter Nights 2, the pressure of living up the the first game, and how the game has improved.

GamingNexus: Thanks for taking the time to talk with us about a highly anticipated game for rabid RPG fans. Lets start off with a little introduction on who you are and whats your part in the game.  How did you get into the gaming industry?

My name is and I am the Senior Producer on the game.  How I got into the industry was sheer luck actually.  While looking for a new job I I had a few friends at Virgin Interactive (Yes, I am old) and took an interview over there.  On the way coming back from Virgin I passed by Interplay which was on the same street. I shrugged, dropped off an application, and went back home to play more Secret of Mana (late ’93). The next day I got a call from Interplay asking for me to come in for an interview.  I showed up in my suit and tie, got mocked by the existing QA folks, and filled out my test.  I apparently answered it well enough and started there a day later. Although it was awesome to be working in the industry I never did get to beat Secret of Mana…

GamingNexus: Neverwinter Nights has such a great following since its release. How much pressure do you feel to live up to all the expectations of NWN fans out there who are anxiously awaiting the release of the game?

The pressure is always there. Obsidian is doing a heck of a job trying to make sure that we are active with the online community, going to conventions, and responding to inquiries as well as we can.  We are making a game that is a sequel to a game that has had an avid fan-base for five years so we also know that we have to try and address as many of their needs as well as the new potential fans.

GamingNexus: You have some very experienced RPG developers on the team. How much of a benefit is that when tackling such large project in Neverwinter Nights 2?

It has been indispensable. Having such a rich knowledge of both the history Dungeons & Dragons and all the past RPGs done by the team is an incredible asset.  Without the team all working together and using their past experiences over the course of the many years there is no way this game (or any game for that matter)to even get made.

GamingNexus: Ive talked to many fans who really enjoy the interface when playing the game Has the interface changed much for the player and if so what are some of the changes? Will those that played NWN 1 be able to just jump right into the 2nd one? What enhancements have you made to the user interface?

We did make some improvements to the interface and camera.  You will be able to choose which style of play you prefer.  Anyone can jump into the game and just start clicking around to move or use their WASD keys if they are familiar with that kind of movement.

I do think that one of our biggest improvements is the streamlining of how the player gets access to their spells and abilities.  We got there by taking out the Radial Menu. Instead of potentially having to go through six clicks to cast a spell, at most you only have to do two now.

GamingNexus: Graphically, the game looks to coming along really well. Did you start from scratch for the graphics or did you take the NWN engine and modify it?

It started with the NWN engine and then grew and grew and grew.  Basically just about everything was rewritten barring some Gameplay mechanics and how the Network game play.

GamingNexus: Besides the usual polygon increase and texture improvements, can you talk about what other improvements made to the graphics over the previous game?

You will notice almost immediately that a lot about the characters and models in the game that we have an asymmetrical look: Bandoleers, one shoulder spikier than another, a hip bag on one side. This was all done to help make the character really be customizable to the player and helps it follow the look and feel that D&D has become.

The single player game is really focused on the story and making the player seem like they truly are the hero. There are side missions that can be accomplished or forgotten about completely but it is not open-ended.  When you beat NWN2 you will definitely know it is over.

I can’t really speculate how long it will take a person to play the game.  Some people like to do every little side quest, get every hidden object, or do everything just right. Others don’t.  I personally play a game like NWN2 more than once.  It seems that the first time I play through I discover that I missed a lot of content and want to go back for it.  I also play a game like this differently knowing that there are multiple endings… Just how evil can I really be before saying to myself “Man, you are a jerk.  Rad!” Now that we have seen some people play the game, including QA and the Design team, we have a lot more and longer of a game than we expected.

GamingNexus: Will we be able to use our characters from the first game in Neverwinter Nights 2 or will we have to start from scratch?

The player will have to start from scratch. The story of NWN2 has some revisiting characters and locations from NWN1 but the main character is not the same person carried over.

GamingNexus: Can we expect the same great experience and ease of DMing a live game in Neverwinter Nights 2?

It should be a very similar experience.  We are trying a few things that will potentially make the DM easier to use but we are currently testing them out to see if they are worth it.

GamingNexus: There have been some great modules developed by the community with the first game. How excited are you to see what the people out there will do with your game? Do you think youll be able to release some toolsets before the official game is release so some modders can start generating content for the game?

I am actually very excited about see what the community can do with our Tools.  Every time we do a demo or a behind the scenes sort of thing we always get “Holy Jeez” type of response.  We aren’t holding anything back from the public.  Everything that we used to create the game will be included in retail. You will have the exact same ToolSet we used to make our levels and the content within.

As for the release of the ToolSet, that is unknown at this time. So that is a maybe.

GamingNexus: With the increase complexity of the engine and from the screenshots the more natural looking outdoor environments, how hard or easy will it be for MOD makers to generate professional looking environments?

I think that once people get into the ToolSet and start to become familiar with it, it won’t be that long. I will admit that there is a ton of new things that you can do with the ToolSet. A metric F-Ton, actually.  I can picture entire teams of folks getting together and working on modules.  However, initially as people will be conquering the learning curve (people with previous experience in creating a NWN module will have an advantage) I think there will be more of a sharing of information and techniques.

GamingNexus: The premium content has really been a great addition to the series offering some great content. Do you see Neverwinter Nights 2 continuing it?

I personally would love to see additional content created and distributed this way, but we are still looking into the logistics of this.  However, once we know the results, we will definitely make a public announcement about it.

GamingNexus would like to thank Ryan for taking the time to answer our questions and to Brandon for helping to coordinate the interview.