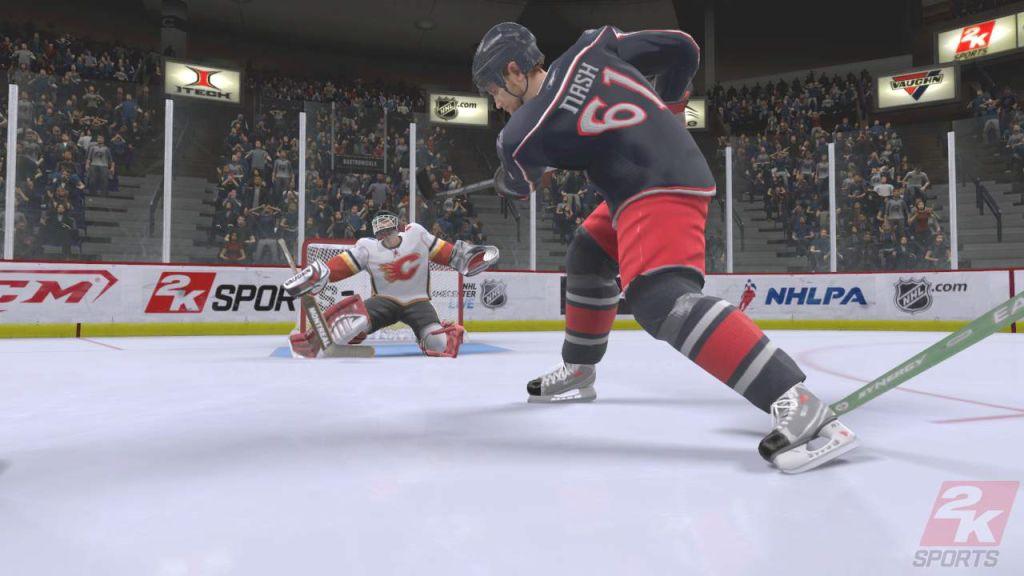 Written by Ben Berry on 10/13/2008 for 360
More On: NHL 2K9
Anyone who follows sports is by now familiar with the idea of a top round draft pick who is the scion of a professional sports family (Manning, Hull, etc.) that prior to proving himself is just a prospect with a high talent ceiling and a famous last name. Some of these young men go on to prove themselves as a superstars in their own right (Peyton, Eli, Brett) while others make epic fail look like a inadequate descriptor (Todd Marinovich, Pete Rose, Jr). Following a complete rewrite by Take-Two subsidiary Visual Concepts for the 2009 season, I’ll break down how this edition of the NHL 2K series fared in its rookie season.

Sports games sometimes seem to suffer from an identity crisis. The developers appear to have trouble deciding if the game should follow the traditional arcade route, or head down the path towards a simulation. Games designed with the right amount of forethought are capable of bridging the gap between the two. This is one area where NHL 2K9 shows a lot of potential. The game offers a default control system that is designed for those gamers who want to ‘pick up and play’ in the arcade style without a lot of effort to get started. While this control set works for a quick learning curve, it doesn’t offer the full range of player control options the other control sets do. 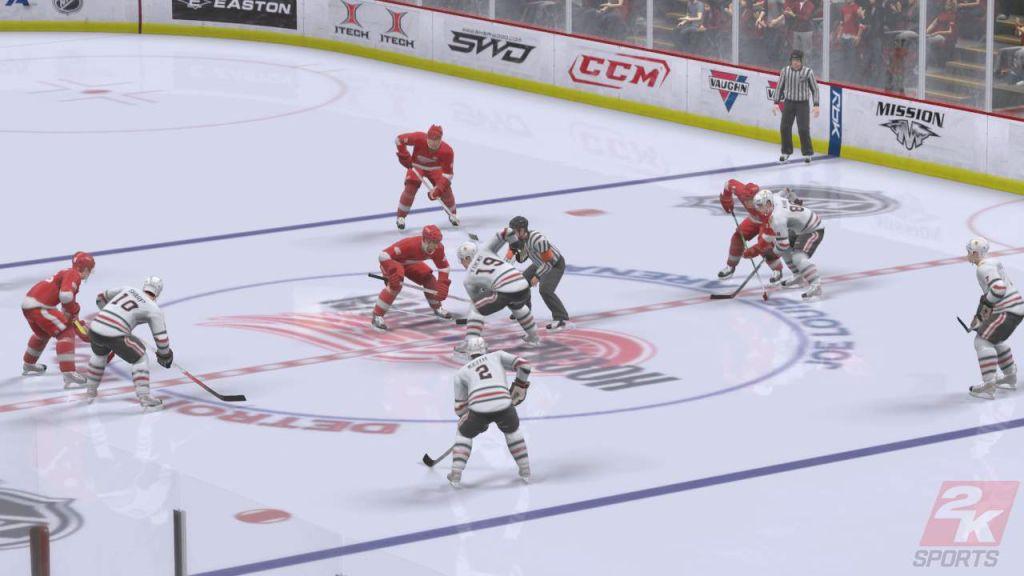 For those who like the classic feel, but want a little more control there is a hybrid control style that takes a few elements of the advanced control set and merges them into the classic mode. The advanced player can make use of “Pro Stick Evolution”, 2K’s answer to EA’s Skill Stick, the control set brought about in NHL 2007 that revolutionized hockey game controls. If you are unfamiliar with the idea, it allows the player to use the analog stick as if it were a hockey stick, controlling both power and direction with a single thumb stick. While this is mostly just 2K playing catch up, its addition is a welcome one, and it even goes a bit beyond the Skill Stick implementation. A large selection of 1-on-1 and goalie dekes (fakes), have been built into the game. Using a combination of the analog sticks two quick thumb movements can help you tie a defenseman up like a pretzel, or have the goalie completely at your mercy.

To continue in this vein, there is a decent selection of game modes available to choose from. There’s the traditional “quick play”, season, and franchise modes that players have come to expect from sports games. Beyond these modes, there are a couple of new modes that players might enjoy. The first is Pond Hockey, which is pretty much exactly as it sounds. You pick what amounts to a 5 player all star squad, and play on a NHL sized rink with no boards or stands. Unfortunately, this mode is merely a visual change, and all play occurs exactly as it would inside an NHL arena. No pucks lost in the snow or jerry-rigged nets. Goal celebrations are the same, and there’s even a red center line, which I’ve never seen on a pond. A more unique mode is the Mini-Rink, which is essentially a shorter narrower rink with curved ends behind the nets. These games are played with fewer skaters on the ice, and designed to be similar to a game of shinny, which is the hockey equivalent of school yard basketball. 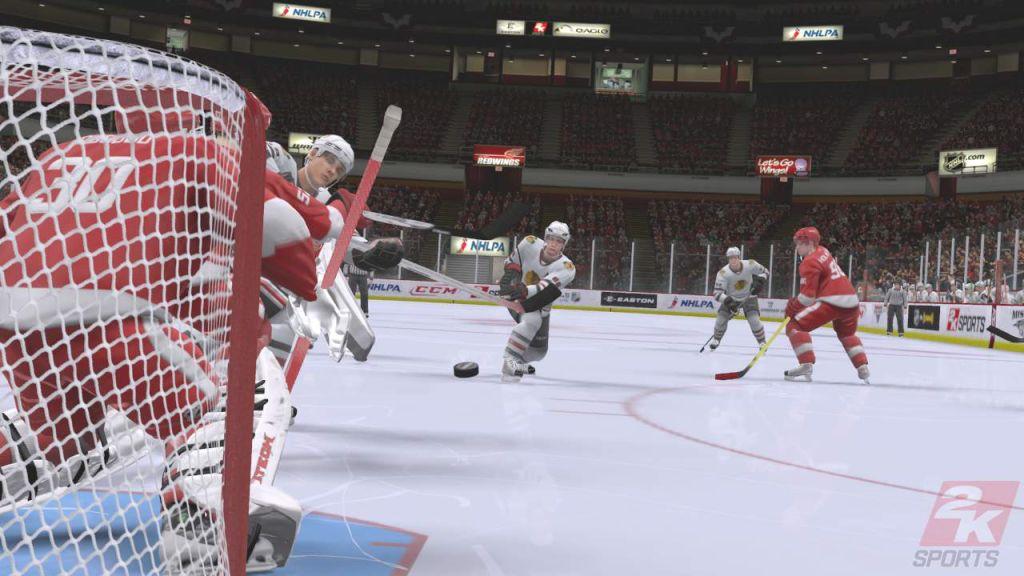 The online experience for NHL 2k9 also has a few new wrinkles, with online team-up and a ranked quick match contest to coincide with the titles launch. The contest lasts for 10 weeks with each weekly winner having a chance at multiple prizes including inclusion in NHL 2K10. The team-up functionality allows up to 11 players to work together to win the game. Each player gets a teammate rating that is updated throughout the game, and is displayed on their online player card. Teammate ratings are tracked on the online leader boards with the traditional ranked ladder scoring.

Visually, the game is like a rookie winger who has dazzling moves but won’t play defense. The menus and game lead-ins are sharp, simple, and to the point. The pregame segments are where the game truly shines from graphical standpoint. The animations feature video highlights of the home team displayed on the ice and seen from the games press box level camera. Sadly, the pregame graphics are the games visual highpoint, and this doesn’t completely carry over into the game play. Most of the games animations are some of the strongest to ever be rendered in an NHL title, with the goalie animations particularly dazzling. But the player modeling is well less than mediocre. 90% of the players appear to be the exact same height, and the facial renderings are incredibly generic, with the possible exception of the games cover athlete Rick Nash, whose in game avatar vaguely resembles the man. The only player I could easily identify by size differential is Boston Defenseman Zdeno Chara, who at 6’9” looks a bit like Frankenstein towering over the frightened villagers. Players differing as much as 6 inches in height looked to be the same model. A feature related to the graphics is the 2K Reelmaker. With this function, players can save, edit, and enhance their highlights and then upload them to Xbox Live. Some of these can be pretty unique, and can be jazzed up with some fun graphics.In terms of the audio, the game is like that 3rd line center that can play some top line spot duty; dependable, but not flashy enough to warrant a lot of attention. While this may sound like a put down, it’s not. My favorite players are usually the 3rd line guys who can do it all, but nothing particularly well. The in-game commentators are the TV play-by-play crew of the San Jose Sharks. While they have decent voices and are not particularly annoying, the recorded calls are far too repetitive. This is nothing new to sports video games, but is an area the 2K series can improve (with all the others). The games soundtrack features a mostly generic set of modern and alt rock entries typical of most modern sports stadiums. Again, not bad, but nothing to write home about and could have been easily improved upon in terms of authenticity with the addition of a Canadian band or two and some hockey related songs.

The general game play was overall a very positive experience. Using the Pro Stick Evolution control set, it wasn’t very long before I was able to set up plays and start getting quality scoring chances. No AI is perfect, and it wasn’t too long before I found that any number of dekes could be used to freeze both defensemen in their lanes leaving the slot (the area of the ice in front of the goalie) wide open. This is the NHL equivalent of footballs Red Zone, and is the most heavily defended part of the ice. This is a serious weakness that needs correcting in next year’s edition. Otherwise the AI is relatively sound. 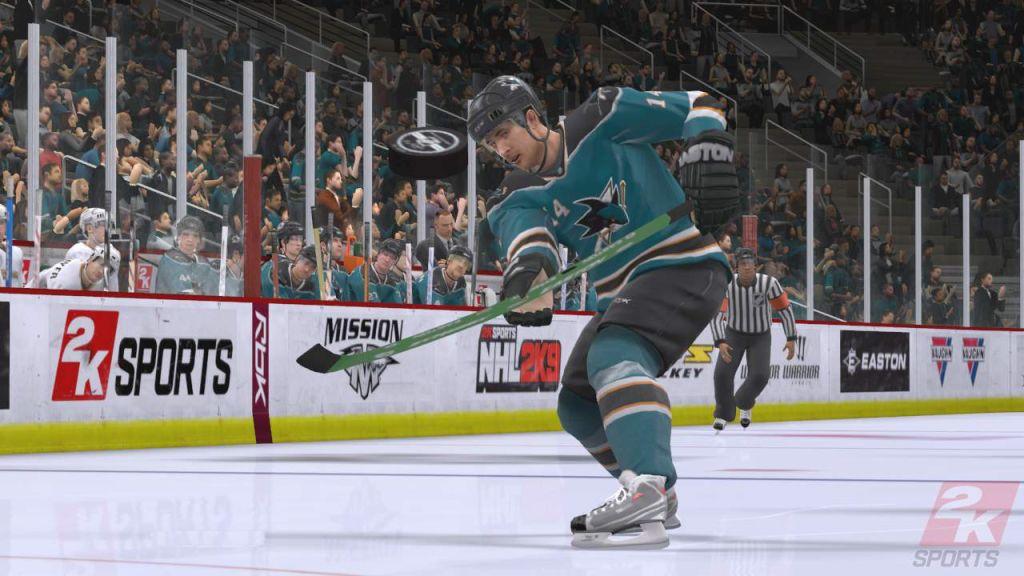 Goalie control for shootouts is one area of game play that provides a nice difference from its rival. During the shootout the player is forced to play the part of the goalie, defending the net from the onslaught of a single attacker in a best of 3 scenario. The game displays a crosshair identifying the shooters targeted area, and the goalie has to move to stay square to the skater while ready to make one of several possible stops.

Fighting is another area where NHL 2k9 innovates, bringing the important aspect of balancing on skates while trying to clobber your opponent. Much of NHL fights end with one combatant grabbing the other and throwing him to the ice. The player with the better balance usually wins this part of the fight. During fights, players not only have to watch their guard and what kind of punch they want to throw, but also which way their player is leaning. Leaning too far to one side opens you up to an onslaught from your opponent and diminishes your ability to retaliate. It’s not as exacting as it could be, but it’s still the most advanced fighting system in an NHL title to date. 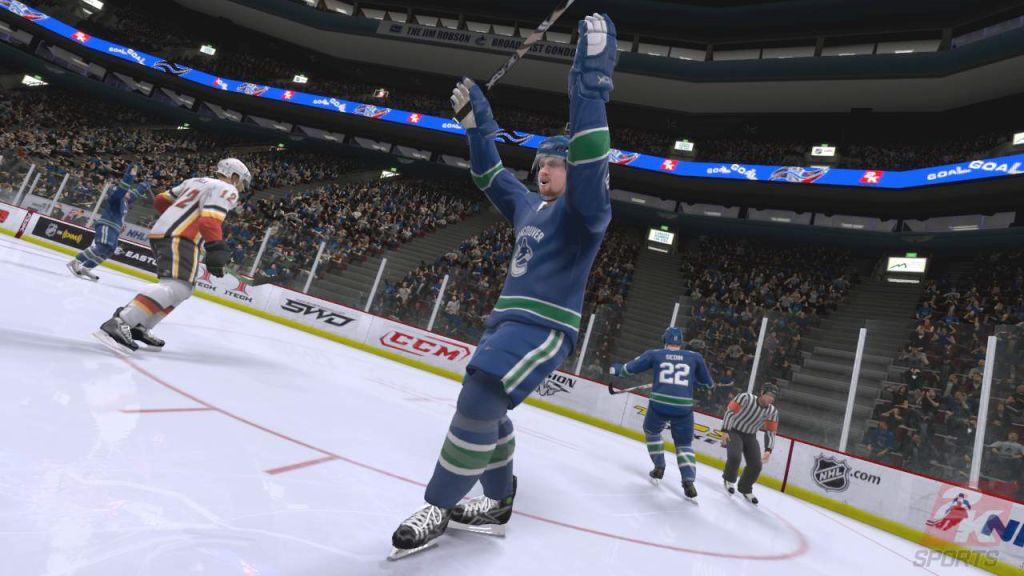 A couple of nice features that enhance the game play involve time. The first is a time passer. While the game loads the arena environment and prepares for a game, the player gets to answer a couple of trivia questions. If playing head to head, you can play against your opponent. No score is kept, but they do have some nice questions with a decent level of difficulty. The other is a time waster. Between periods, players can choose to participate in a Zamboni race. The goal of this mini-game is to clean more of the ice than your opponent. It’s good for a laugh once or twice, but will definitely appeal to younger fans who may enjoy this as much as the main game.

This game is very much like so many talented rookies in the NHL. It shows flashes of promise and some exceptional areas, but also some pretty big holes to its game. Rebuilding the character modeling from the ground up, shoring up the AI, and getting rid of the red line in the pond hockey mode would go a long way in making this rookie into an All-Star.
NHL 2K9 is a significant upgrade from the 2K8 offering, but the complete rewrite has some noticeable flaws that demand attention in the 2K10 edition. That said, if those flaws are addressed, this title has a lot of positive things going for it, and can be a serious challenger to EA Sports recent domination of the NHL franchise.