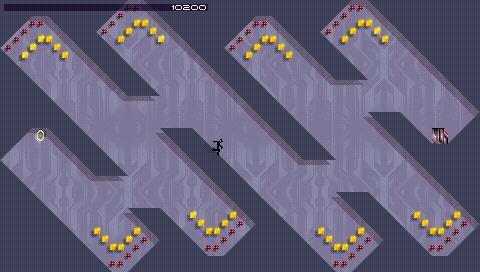 Written by Cyril Lachel on 8/5/2008 for PSP
More On: N+
There's not a lot of middle ground when it comes to N+; it will either remind you of everything you loved about classic 2D platformers ... or dredge up the nightmares of everything you hate. It's a game that requires near perfect jump controls, a light touch and tons of patience. For some it may just be the most frustrating portable game they will ever experience. But not me, I found it to be the perfect throwback to an era filled with complex jumping puzzles and a difficulty that literally hated you.

For being such a frustrating experience, N+ is surprisingly easy to explain. You play a teeny tiny stick figure who has incredible running and jumping abilities. In each level it's his job to get to a special button to open up the exit. That means that he'll need to traverse the rough environment to trigger that switch and then come back to the exit. Sound simple, well think again. Sure each of the levels takes place in a small room, that doesn't mean you're going to have an easy time getting around the landmines, missile launchers, gunners, flying robots and other obstacles set in your path.

The gimmick of N+ is that you have a remarkable amount of control over your tiny character. Since this game requires pixel-perfect jumps, you'll be thankful that you can bend and turn your little character in the air. A lot of these things you have seen in other 2D platformers, but everything in N+ is exaggerated in a way that gives it its own feeling. Best of all, the controls are super easy to get used to and you'll be jumping, dodging and finding the exits with the best of them in no time. Couple that with extra long jumps, wall climbing and other special moves and you have one of the most versatile platforming heroes around.

The starts you out with only a few levels to choose from, but quickly you'll be opening up new (harder) worlds full of crazy new challenges. You'll never know what you'll get from level to level. On one level you may be dodging missiles being fired at you, while in the very next level you may have to make careful jumps around landmines. And sometimes it's not even the enemies you have to worry about; if you fall from too great of a height you'll die and have to start over. 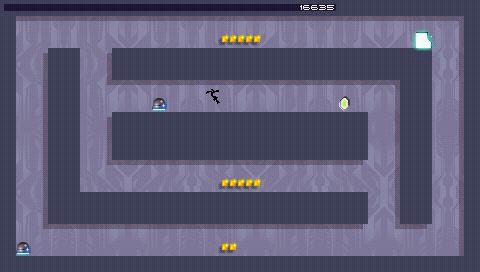 Thankfully there is no punishment for dying too many times, but you will have to complete each level within a certain amount of time or it's game over. The good news is that you can pick up small yellow dots that add time to the countdown. Even when you die these dots will reappear, which means that you will generally be able to retry the level as many times as you need to without worrying about hitting a "game over" screen. That's not to say that you will always be able to avoid such a screen, some of the later levels are maddeningly difficult and will test your ability to pick up the extra time. But all in all N+ allows you to keep on trying no matter how many times you fail at a level.

N+ is not the kind of game that you want to play for hours on end, the sameness of the puzzles and gameplay can get a little old if you spend too much time staring at the PSP screen. However, in short bursts this game is near perfect. And Atari (or more specifically SilverBirch Studios, the company who developed this PSP port) knows that this game is meant to be played a little at a time. Nearly every mode in this game is designed with a pick-up and play attitude. In the quest mode, for example, you can easily pick up the game and spend four or five minutes completing one set of levels. The game auto-saves at useful occasions, it's easy to know what you haven't done and getting in and out of the game is absolutely simple. If you only have a few minutes to play a game every so often, then N+ is a perfect short-term time waster.

The brilliance of N+ is that there's always another level waiting for you. The single-player mode offers 200 levels and there are another 150 levels in the multiplayer. And that's not all, you can also go online and download completely new levels, made by both fans and professionals. That's right, there's a full-on level designer in this game, one that allows you to upload and share your favorite levels. Depending on the N+ community, you could conceivably be playing new levels years into the future. Best of all, the only thing limiting your amount of levels is the size of your memory stick. But don't worry; I hear those 32 GB memory sticks are coming down in price. 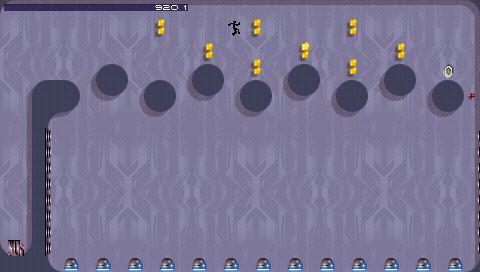 If you're not impressed with the sheer amount of levels, then you're probably not going to be won over by the simplistic graphics. While the game is fast-moving and the character animates nicely, the truth is that this game isn't very good looking. It's not ugly, not by any stretch of the imagination, but if you're the kind of gamer who needs to watch huge explosions and characters made up of thousands of polygons, then N+ is definitely not for you. It has a certain beauty to it, even if the graphics (including the enemies, backgrounds, etc.) never change.

If there's one problem with N+ it's the slow moving interface and odd load times. When you first start up the game you will think that you're PSP has frozen, the game doesn't do anything for almost a full minute. Unfortunately this problem continues throughout the rest of the menus, especially when trying to select levels and options. Ultimately this isn't that big of a deal, but it's not the best way to introduce people to your game. Thankfully when you're actually playing the game you run into very few load times or freezing issues.

Even if you didn't have the multiplayer, level designer and ability to download new map packs, N+ would still be a steal at $20. But N+ has all that, which turns this from just another action game to being a must-have portable game. It's not quite as original as Puzzle Quest or Crush, but N+ definitely knows how to scratch that itch we all have for old school platforming. While it's not perfect, Atari's newest action game proves to be one of the best handheld games of the year.
It may not be the best looking game on the PSP, but N+ proves that it can more than hang with the big boys. Atari's newest action game features hundreds of levels, downloadable content, compelling multiplayer levels, a level creator and much, much more ... and it's only $20. It's not perfect, but for that price you can't afford to pass up this retro platformer!