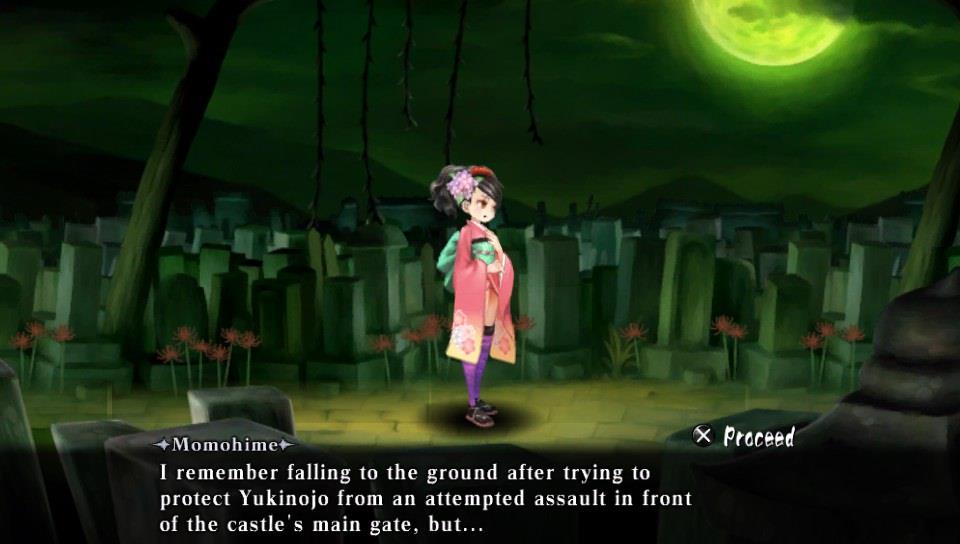 Written by Jeremy Duff on 7/29/2013 for Vita
More On: Muramasa Rebirth
Love it or hate it, nearly all of us had a Nintendo Wii at some point in the past couple of years. Between your bouts of Wii Sports with your grandparents, and the inevitable trek through New Super Mario Bros. Wii, we all had other guilty pleasures found throughout its library. Everyone seems to have one game that they latched onto, one that they truly enjoyed on the system, even if they don’t want to admit it publicly. For me, it was Vanillaware’s Muramasa: The Demon Blade, which Matt reviewed a few years back and loved every bit as much as I did. I was hooked on the game from the first time I saw it and wasted no time to throw my money down in anticipation for its release (the original preorder art poster still hanging above my desk to this day as a matter of fact).

You can imagine that once news broke of an updated, Vita version of the game, I was incredibly excited. It may have taken them a little why to bring it over from Japan, but Muramasa Rebirth is finally available here for the Sony’s lovely, little handheld. Thanks to a gorgeous new coat of paint, various control tweaks, and added DLC support, the game is back at the forefront of my gaming life. After spending 30+ hours with the game, I am convinced that you should probably make it part of yours too.

If you missed out on the original game, let me set the stage for you. Muramasa tells the story of a demon blade crafted by an ancient Japanese blacksmith of the same name; it is the perfect blade and he created many prior to forging the perfect one. As a result of his determination and obsession with its creation, his blades are considered cursed and have an unquenchable thirst for blood. The blades are said to take over those who wield them in order to quench their need to spill blood.

This story is chronicled through two distinct tales, playing out as two separate campaigns in the game. The first is that of Momohime, a young Princess, while the other is of Kisuke, a young ninja with amnesia. Although you play them out separately, in any order that you choose, the adventures occur simultaneously and actually cross paths numerous times. They are distinct stories though, with their own unique boss encounters despite sharing the same locales. Both are extremely interesting and entertaining stories too, without ever becoming too taxing or complicated. They provide a nice mix of Japanese mythology, Buddhist ideology, and paranormal activity which weaves a memorable adventure.

Both adventures involve the characters obtaining and ultimately forging new Muramasa blades to use. There are more than 100 different blades in the game and just like Pokemon, you will want to “catch’em all”. It is a fun and addicting aspect that pushes the story and the action forward as each blade has unique properties and powers. Plus, you equip three of them at a time, so the combinations are endless and can be tailored to your preferred fighting style(s).

While there are a bevy of RPG-like elements to the game, such as character leveling and inventory management, the gameplay is very action-based. Fighting plays out almost like an old-school brawler, albeit with a much deeper combat system. The control setup is very minimal, providing you with simply four commands to utilize: jump, strike, sword switch, and sword art (power). The strikes can be altered when combined with a direction on the control stick, making it a simple, yet accessible system that flows incredibly smoothly. It does take a little getting used to in order to better understand the various transitions of battle, especially when mixing in the special abilities of your sword, but once you master it, battle become a thing of beauty. It is a great feeling to take on a crowd of 5-10 enemies, or more, and zig-zag your way all over the screen in one, smooth motion leaving their lifeless bodies in your wake. Then, at the end, you character strikes a dramatic pose and sheaths their sword... it never gets old. 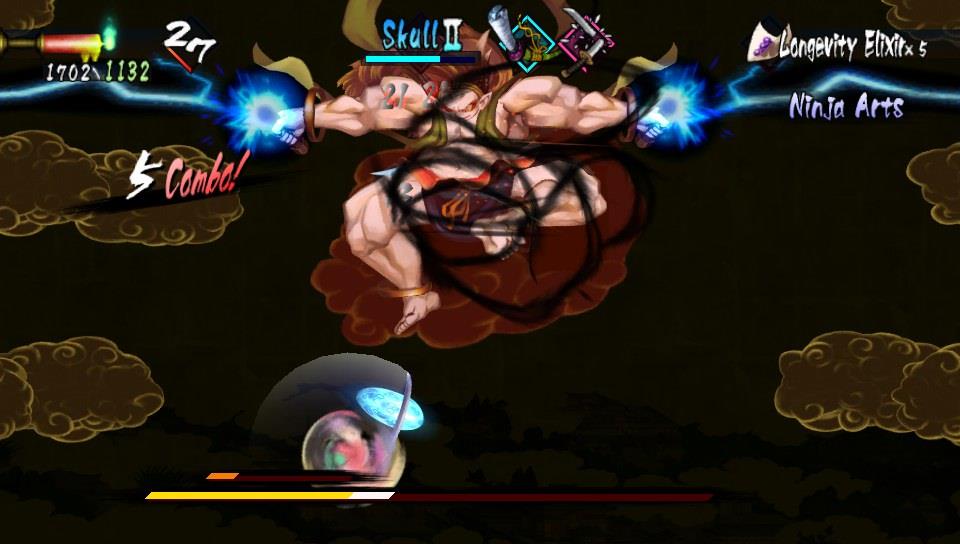 This can make the game sound deceptively shallow, and it would be easy to experience it as just that. Digging deeper however uncovers a rich and captivating world filled with some interesting gameplay concepts that most gamers may not even take the time to explore. That is part of the beauty of the Muramasa experience: you can play it start to finish however you like, dashing through as a shallow, action adventure, or diving deeply into its rich RPG-esque world. The choice is yours. If you do choose to dig deeper there are a large variety of unique equipment items to be found and utilized, as well as numerous endings, and a deep, yet uber-entertaining cooking system that will help you immensely. Again, these are all optional parts of the adventure, but I would have a hard time believing that anyone who played the game wouldn’t get sucked into exploring everything there is to offer.

The experience hasn’t changed a ton since it made the transition from the Wii to the Vita, which is both good and bad. In terms of enhancements, there is the obvious graphical improvements, despite the fact that the game looked simply amazing on the Wii. The HD-esque visuals of the Vita take it to an entirely different level though thanks to the vibrant, Japanese-ink / painted art style and extremely crisp animations. things never slow down either, making it truly look like a work of ancient art that has come to life.

The controls have also been tweaked to better accommodate the new platform. Things play out incredibly well now that things have been spread out to the four-face buttons plus having both an analog stick and a control pad. The control pad gives you easy access to your consumable item inventory while movement is relocated to the left control stick. The touch screen is never utilized because it doesn’t need to; thank goodness they didn’t make an attempt to shoehorn in touch-controls just because they could (a mistake many developers make). Unfortunately, there is very little that can be done to alter the controls of the game, not that they are bad. There are just a few minor tweaks that I would have like to have made personally, such as assigning the combat doge / roll to one or both of the triggers, but the options don’t allow for that. 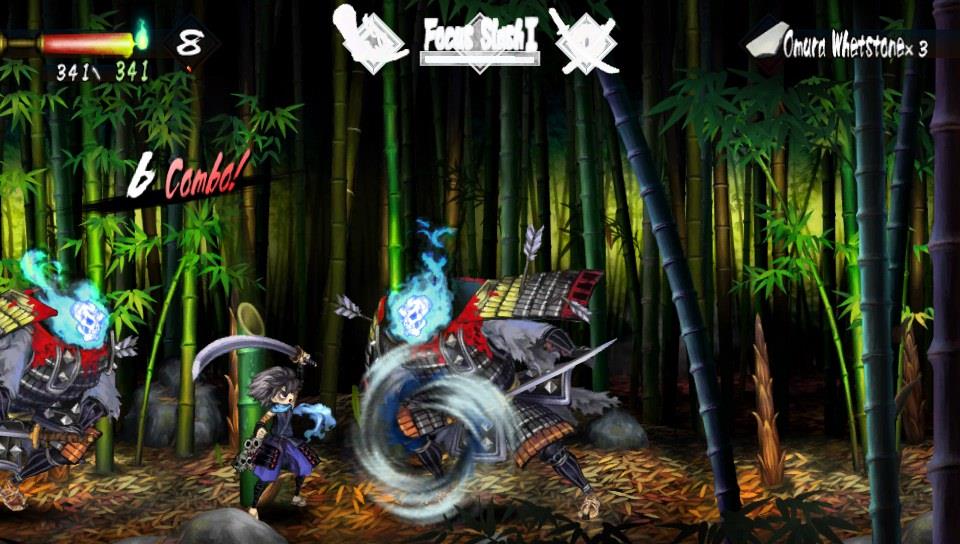 The biggest problem of the original experience happens to have made the transition to this version as well: a ridiculous amount of backtracking. Seriously, you will spend a huge part of your adventure running back across maps and towns that you have seen dozens of times before. There is a fast-travel mechanism, that becomes available in time, but it won’t be accessible until you have already walked like what seems like 10,000 miles. Both stories have you criss-crossing a map of feudal Japan, although there are more than 15 different cites to explore and hidden challenges and areas to be found within each town.If you take the time to truly explore your environment and the locales, then the backtracking doesn’t seem as bad, but those looking to simply dart through the adventure from start to finish will definitely have to face it head on.

These small complaints are easy to overlook when you take in the entire package that is Muramasa Rebirth. The “good” brought by the responsively and down-right fun combat system and the smart integration of RPG elements that can be either ignored or explored as you see fit far outweigh any minor annoyances that I have found. I am not usually the sort of person who goes back through and replays games after I have beaten them once; well, I am seeking out my sixth ending on Muramasa and have clocked in more than 30 hours and counting. Plus, the Vita version also includes full DLC support which means more content is coming that will sweeten the pot even more There are a couple of new side-chapters with unique, playable characters here as well, that weren’t in the original. Whether you played the original or not, Muramasa Rebirth is definitely worth your time and money. This isn’t just one of the best games available for the Vita, it is one of the best games to release this year.
Muramasa: Rebirth was a great game on the Wii but on the Vita, it is a masterpiece. Excellent and engaging gameplay, enjoyable stories (yes, multiple), and one of the most visually appealing art styles ever used in a video game combine for an adventure that every Vita owner should take.