Written by Randy Kalista on 9/16/2013 for PC
More On: Memoria
Memoria doesn’t start from the beginning. Memoria is part two of The Dark Eye series, sequel to 2011’s The Dark Eye: Chains of Satinav. That’s okay, though, because starting in medias res--in the middle of its narrative--builds on Memoria’s chaotic theme of memory, false memory, and the stories we tell in order to connect them.

Memoria weaves its narrative and its timeline between two main characters and two different eras. Geron, a tousle-haired bird catcher, resides in Memoria’s present day. His singular drive is to restore his girlfriend’s normal fairy body because she’d been transformed into a raven. Four hundred fifty years in the past is Sadja. She’s a princess, but you’d never know that from her ambition to become history’s most renowned warrior. Funny thing, though, is that no one in Memoria’s present day remembers who Sadja was. Something thwarted her plan to become a revered and worshiped warrior-princess. She wanted to go down in history books, but the history books apparently thought otherwise.
And that’s where Geron the bird catcher unwittingly comes in. All he wants is to have his girlfriend slip into something more comfortable than raven feathers. But he’s posed with a riddle that bridges four and a half centuries, ties his side-quest-of-a-lifetime to Princess Sadja’s defunct memoir, and learns that the past can be as much of a blank page as the future.

Nestled deep in point-and-click adventure land, Memoria travels across painted landscapes, its inventory bar breathing in and out at the bottom of the screen, while the steady soundtrack of your mouse clicks fill in the silence between clips of dialogue. You will, with varying levels of success, solve puzzles tucked into the environments. You’ll combine items sidling up to one another in your inventory. Your muscle memory will whip out the good ol’ mouse crawl technique, zigzagging up and down, side to side, slowly looking for people and items to click on. There are simple one-button ways to highlight hot spots, though, so you can spend more time parsing the story rather than picking apart pixels.

Geron’s present tense starts off in the vicinity of Andergast, a low-fantasy town known for its ability to form lynch mobs when things start smelling fishy. Andergast isn’t lacking in magic, but magic is sequestered behind inner city walls, moody and trapped in books and libraries, neatly set apart from the gutters and pigpens and ramshackle medieval urban sprawl and unwashed masses. Geron gets the occasional breath of fresh air out in bright, deciduous woods, taking in a waterfall or two when the mood is right. 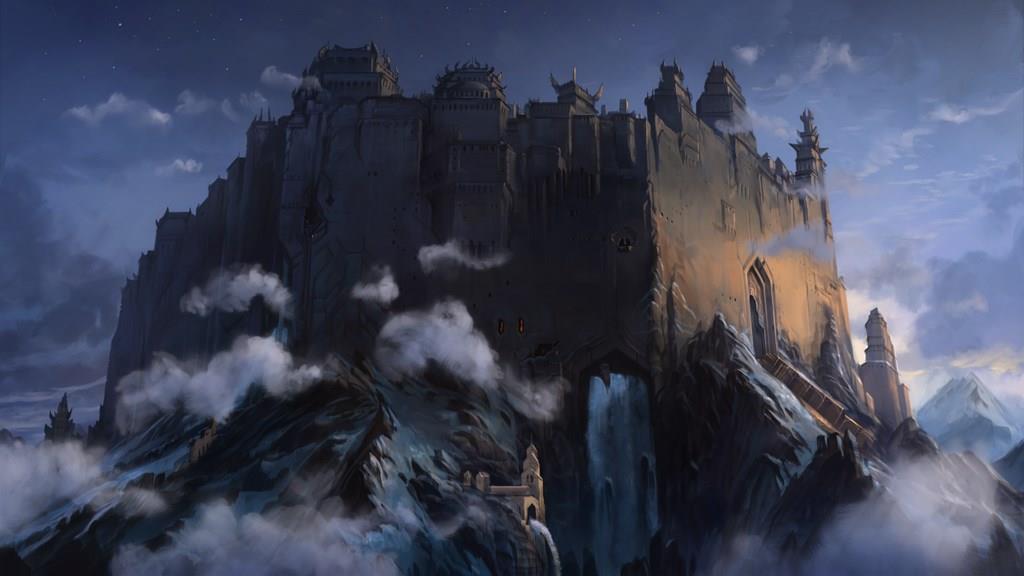 Princess Sadja’s story carries itself through maze-like forests, mountainous fortresses, and monolithic tombs. The past, where Sadja resides, is the stuff of epic magic and high fantasy, written larger than life, either through an effect of storytelling, or because the land truly flowed with greater magical energy than the comparative doldrums of the present.

The soundscape is sparse throughout, however. On the one hand, I’m glad developer Daedalic Entertainment put its money in its writers. On the other hand, the thin, tinny, clunky sound effects work hard to flatten the world. Walking through calamitous taverns or across grassy fields or over blizzard-whipped mountain passes never set right in my ears. And the minimalist theme music, a simple ditty plucked on a harp, sounds lazily lifted from The Elder Scrolls series. Throughout Memoria, I sometimes had to take their word for it when they said, for instance, that a battle raged all around, or that wind was whispering among the leaves.

Now, in the timeless words of Forrest Gump, "I am not a smart man." My tolerance for mindless or mind-numbing puzzles pegs me as an enemy of the state when it comes to many adventure games. But Memoria somehow knew that, and rarely stymies momentum with head-scratcher puzzles or random guesswork. Sure, there are a few, but an adventure game wouldn’t be doing its job if its gameplay was simply Press X to Win. The seasoned adventure gamer knows when to get up, walk away, and return 15 minutes later with a fresh pair of eyes. Sometimes that makes all the difference between a roadblock and a revelation, and Memoria is in keeping with that tradition. 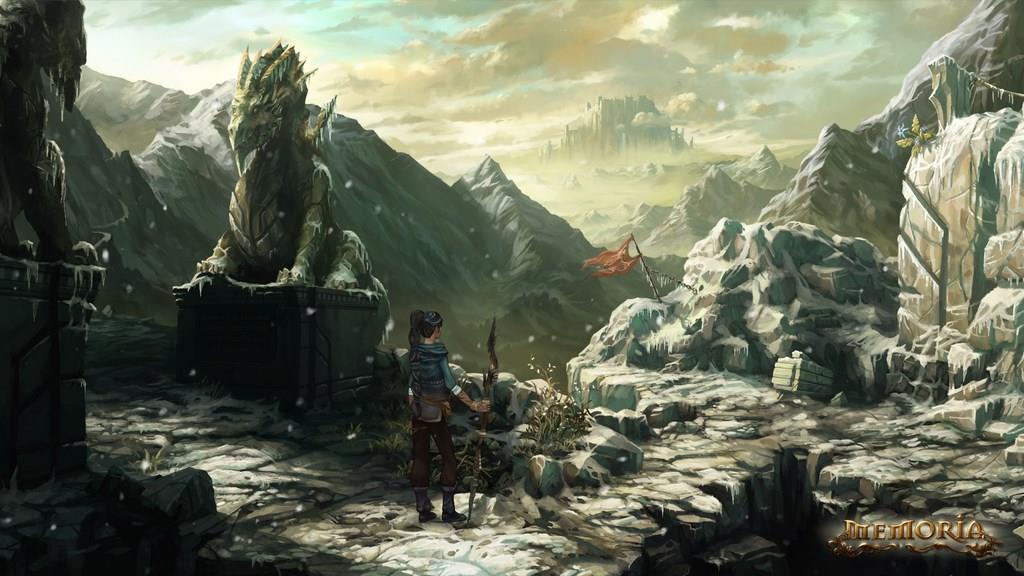 I dreaded certain moments, too. Like the moment I realized I was in a forest maze, choked with fog, riddled with lookalike pathways that led to more lookalike pathways. I immediately flashed back to the desert in 1990’s King’s Quest V. In Memoria, I thought I might die in that forest, but the game did two things to ease the pain. First, in that forest maze, it handed me little blue berries and little red berries to lay down as a breadcrumb trail. As I wound around, up and down, I came back across berries I'd laid down and immediately knew which path to not take again. Second, Memoria gave me an out. After I’d wandered for dozens of screens populated with nothing but pathways and pine trees, it gave me the option of skipping the maze altogether. It was a good-guy move on the developer’s part, and one I politely declined. If Princess Sadja’s tale involved an hour or two of navigating endless evergreens, then I accepted Sadja’s fate along with my own, and pressed on until I finally passed through it all. It was one of those moments that conveyed its near-hopelessness through mentally exhausting gameplay, and it worked.

Another moment I dreaded--but ended up falling over myself with excitement about--was having to pull out a sheet of graph paper in order to map some lookalike rooms. Each room was populated with the same four objects, but in a certain rotation. My progression, because I simply didn't have the mental fortitude to memorize the pattern, required me to write down the rotating layout of a suit of armor, a marbled goddess, a shield with a crude map, and an empty torch sconce. There’s nothing like self-drawn maps to bring out the kid adventure gamer in me, and, I suspect, many other point-and-click aficionados, too.

Memoria doesn’t shake up point-and-click adventure norms. Not in the way, for instance, that The Walking Dead does with its lack of an inventory screen, its proliferation of quick time events, and its ability to punch you in the gut with devastating, branching storyline decisions. Sure, Memoria stopped me in my tracks a time or two, as I gathered my wits about me to make important game-changing decisions, but they’re rare, and not a lot of buyer’s remorse accompanied those choices. But let me be clear: Memoria certainly has a couple depth charges that made me sit up and take notice of where and what I clicked next. The entire narrative, though very Point A to Point B in the way it’s told, is expertly braided together. 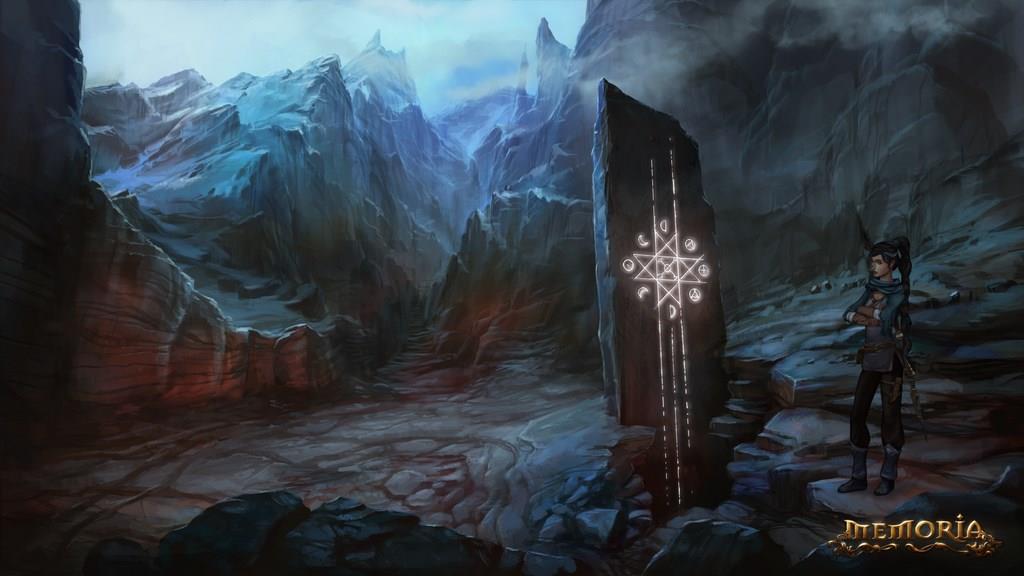 There are rich themes to explore, like who you are now, who you were then, and the storyline connecting those two individuals to form a singular person. There are themes of historical veracity, where history is written by ancestors, rewritten by successors, and the pen remains--as always--mightier than the sword. There are themes of rulership and subjugation, where the tables seemingly turn as soon as they’re settled. There are themes of entrapment, whether trapped as a warrior in a princess’s body, or trapped into a set of actions dictated by your unhealthy ambition, or trapped by a boyfriend that simply wants everything to go back to the way it was.

And so, the tale begins in a darkened wood, on a moonlit path, in the shoes of a medieval man named Geron carrying nothing but his girlfriend’s old necklace and a knife. Chimney smoke lifts from homes in a distant, hate-filled burg, while lightning bugs dance above tufts of swaying grass. It's an unassuming intro to a winding story rife with hard truisms and red herrings alike. Memoria is a game I won’t soon forget.
Memoria is as intelligently spellbinding as it is beautiful. It's a tapestry of truth versus lies, of storytelling grappling with the fallacy of memory, and of the interesting idea that the past can be as malleable as the future.