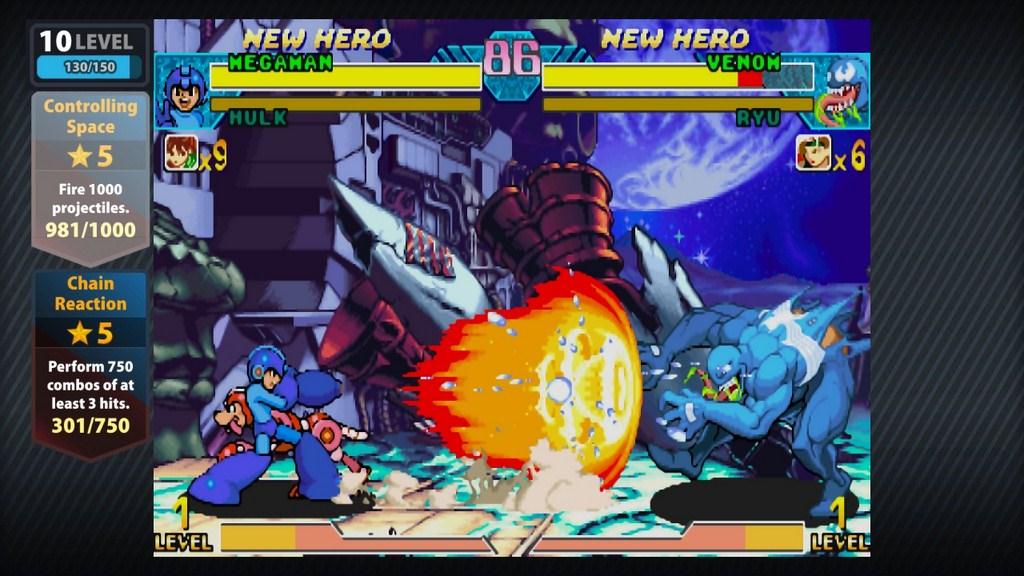 Written by Cyril Lachel on 10/1/2012 for 360
More On: Marvel vs. Capcom Origins
When the original Marvel vs. Capcom fist hit arcades, Sam Raimi was years away from rebooting Spider-Man, Bryan Singer's X-Men was merely in the planning stages and Joss Whedon was too busy helming Buffy the Vampire Slayer to even consider writing and directing The Avengers.  It was a point in time before Marvel had really broken out into the mainstream media; a time before everybody and their grandmothers knew that Tony Stark was Iron Man.

It's hard to believe that so much has changed in the last fourteen years.  Thanks to a steady string of top grossing superhero movies, popular video games, an expensive Broadway musical and television shows, Marvel can finally say that they are the comic book kings of all media.  Marvel vs. Capcom Origins for the Xbox Live Arcade and PlayStation Network takes us back to a time before all the mainstream success; back to a time when Iron Man and Thor were just B-tier heroes. 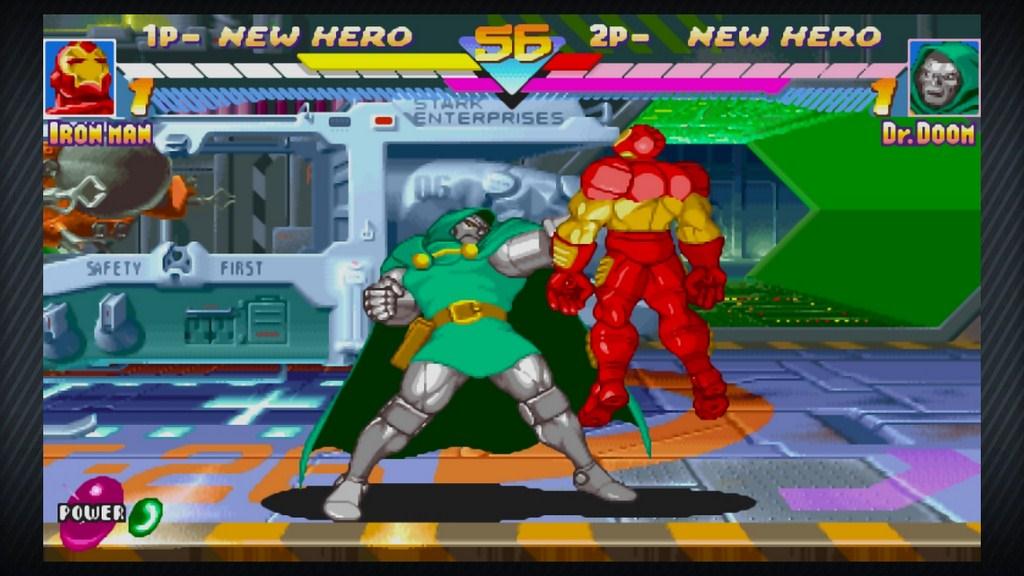 Marvel vs. Capcom Origins is an endlessly addictive compilation featuring two Capcom arcade hits.  As the title suggests, the first game is none other than Marvel vs. Capcom.  For the first time ever, fans of both Vega and Wolverine will be able to own all three Marvel vs. Capcom  installments on one home console.   Along for the ride is Marvel Super Heroes, the 1995 arcade hit that helped lay a lot of the fundamentals that would later be used in Capcom's versus series.

Of course, neither of these games are the real origins of Marvel vs. Capcom.  For that you would need to go back to X-Men: Children of the Atom in 1994.  Also missing is X-Men vs. Street Fighter and Marvel Super Heroes vs. Street Fighter, two arcade hits that would have fit in perfectly next to the original Marvel vs. Capcom.  While purists might grumble about the selection, the two games in the package are the best of the bunch.  Although the subject matter is the same, their differences help complement the other.

Compared to Marvel vs. Capcom 2's staggering 56 playable characters, the first installment is downright quaint.  There are 22 characters in total, evenly spread out between Marvel and Capcom.  You get the usual suspects, including Ryu, Chun Li, Zangief and Morrigan on Capcom's side, and Wolverine, Hulk, Iron Man and Captain America over at Marvel. 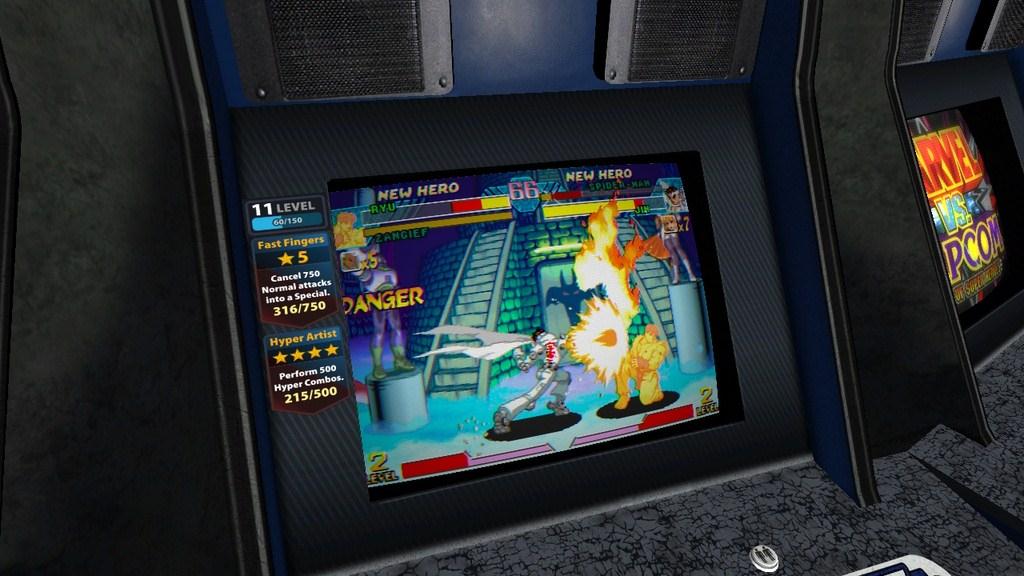 Capcom could have stopped right there and everybody would have been happy, but they took the extra step needed to make this 1998 tag team fighter truly special.  You don't just get the regular characters; you also get brawlers pulled from the archive.  Strider's Hiryu makes a surprise appearance, as does Captain Commando.   Mega Man and Roll bring some pint-sized power, and Gambit wins a spot over a whole host of more popular X-Men characters.  This is a delightful cast that is fun to pair up.

Unlike Marvel vs. Capcom 2, this game is only two-on-two.  You can bring out a third computer-controlled helper from time to time, but you will only ever select two different fighters.  Considering how frantic and crazy the sequels became, the slower pace of the original is a welcome treat.  While all kinds of chaotic special moves happen throughout the round, I almost always had enough time to plan ahead.  Learning each character is also easier when there are only 22 to choose from. 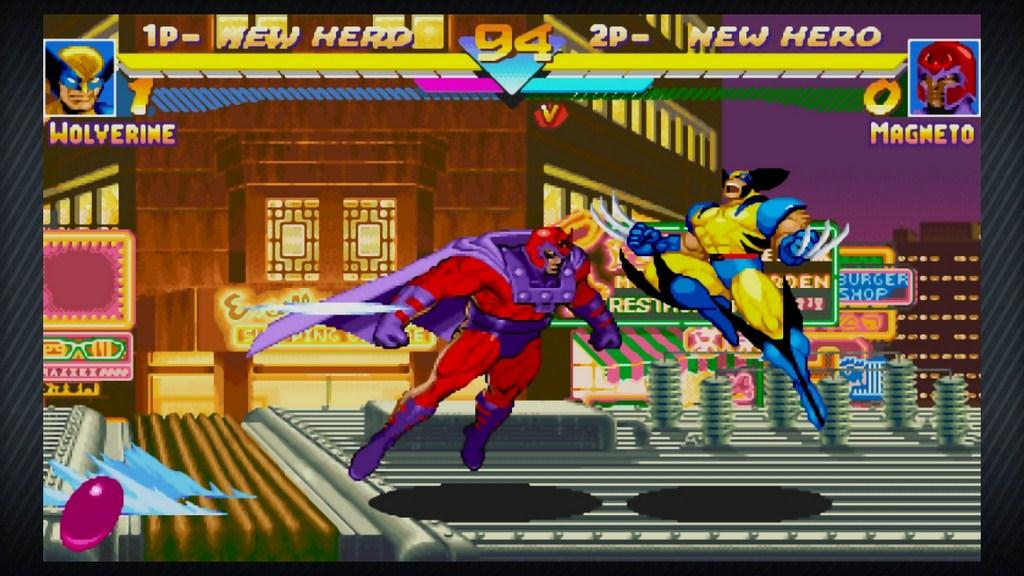 Looking back at it now, it's clear that Capcom was using these games as a sounding board for their different ideas.  Marvel Super Heroes introduces a number of weird concepts that never made it into Marvel vs. Capcom.  For one thing, much of the fighting revolves around these little orbs that get beaten out of your opponent.  These orbs allow players to power-ups their character, earn life, speed up and more.  It's a unique gimmick that makes this 1995 arcade hit feel more like Capcom's Power Stone than a Street Fighter game.

While a game like Marvel Super Heroes vs. Street Fighter might have made more sense in this compilation, it's nice to see the comic book giant get a release that isn't crowded with Ryu and Ken cameos.  And because it's a one-on-one fighting game, it feels substantially different from the more frantic tag team action of Marvel vs. Capcom.  This is a great change of pace that offers its own set of exciting moments and secrets to uncover.

Despite being well over a decade old, both games have held up extremely well.  Of course, much of that comes down to the know-how of everybody involved.  By 1995, Capcom had all but mastered the art of making 2D fighting games.  The result is incredibly polished arcade titles with top notch visuals and a good sense of depth.  Both games feature impressive boss battles, character endings and colorful backgrounds that change as the fight roars on.  The artwork looks like it was pulled out of the pages of a Marvel comic book, which is the highest praise you could possibly give this style of game. 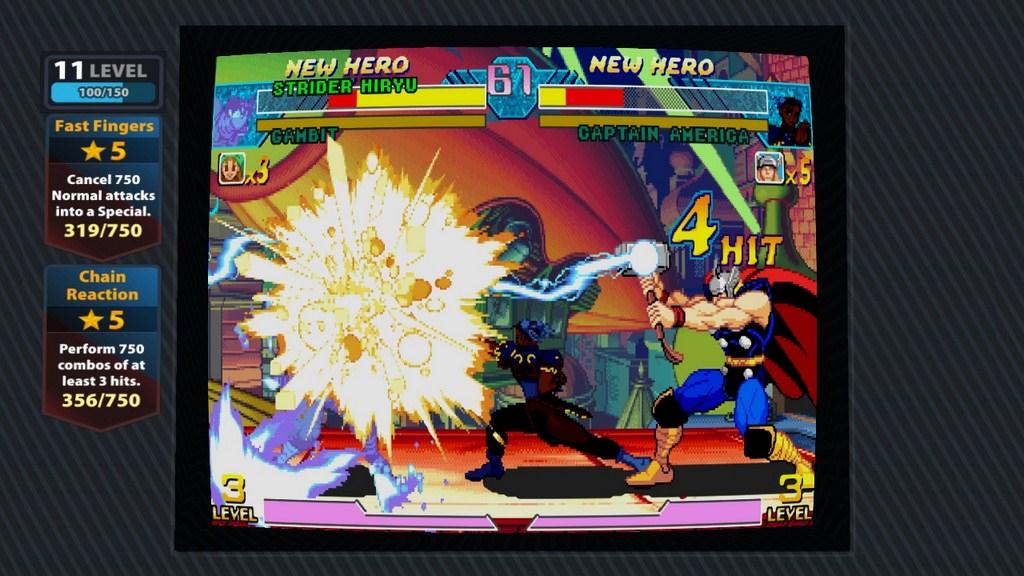 Just to add another level of authenticity, Capcom has added a filter that approximates the look of the original arcade cabinet.  With its rounded corners and lines of resolution, it's uncanny how similar it looks.  Not feeling nostalgic?  Don't worry, you can shut off the filtering and make the display full screen.  Or, just for fun, you can play the game from over the shoulder of somebody else.

Much like Street Fighter III: Third Strike Online Edition released last year, Marvel vs. Capcom Origins features a list of goals to complete while battling opponents.  Many are as basic as throw a certain amount of projectiles, while others require users to perform lengthy combo moves.  Many of the goals will be completed by simply playing through the arcade mode a few times, but there are a few that will take some real doing to accomplish.

Even if this is nothing more than a way to count up how many times you throw an enemy or land a three-hit combo, it's fun to have something to work towards while grinding through the same batch of characters one after another.  Completing these goals also gives you points, which in turn are used to buy hidden characters, costumes, music and concept art.

Both games offer online modes, though neither is especially fleshed out.  I found it easy to get into a game and have a good, lag-free time.  Unfortunately, this is not a series that is welcoming to new players.  Both games are full of exploits that series veterans will use to end the round as quickly as possible.  Thankfully the offline mode is compelling enough to keep you playing until you finally stand a chance to defeat Sheng Long ... or, at the very least, Thanos.

Marvel vs. Capcom Origins may not have as many modes as newer fighting games, but these two games more than justify the fifteen dollar asking price.  The goals are also a lot of fun to complete, forcing you to try characters and moves you might otherwise skip.  Regardless of whether you're brave enough to face the online competition or not, you'll get your money's worth with Marvel vs. Capcom Origins.

This is yet another Capcom collection that pits two similar fighting games together for one cheap price. The good news is that both Marvel vs. Capcom and Marvel Super Heroes are great games that hold up well. Unfortunately, the bad news is that you're going to get stomped online. With its creative use of filtering and goals to complete, Marvel vs. Capcom Origins is a must-buy for anybody with an interest in fighting games!