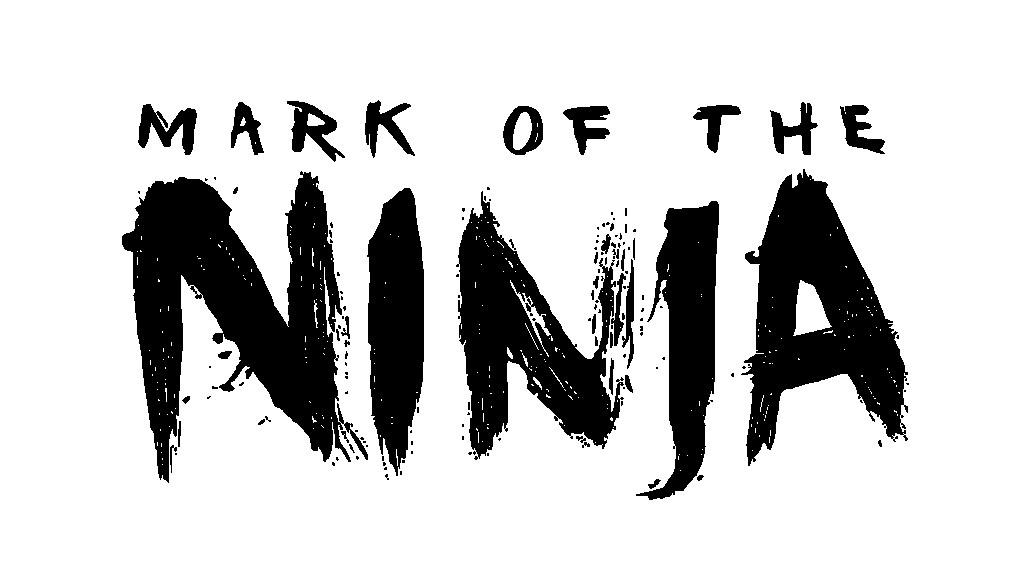 Mark of the Ninja

Written by Cyril Lachel on 10/8/2012 for 360
More On: Mark of the Ninja
While hiding in the shadows may be a good tactic if you want to perform a stealth kill, it turns out that it's not the ideal way to get people's attention.  Despite being published by Microsoft, Mark of the Ninja has slipped by completely unnoticed.  With its smooth gameplay, gorgeous artwork and deceptively twisted storyline, there's a lot to love about Klei's newest stealth/action game.  Mark of the Ninjas is not only a strong contender for game of the year, but a new high water mark for all ninja games.

You play the ninja in question, a super-powered fighting machine that has been marked with a large tattoo.  The tattoo gives our hero all kinds of special powers, but will eventually drive the ninja insane.  From here you (and a computer-controlled female ninja) set out on an adventure to get revenge.  The target is a bearded gentleman with a striking resemblance to The Most Interesting Man in the World from the Dos Equis advertisements.

For much of the game, the actual story isn't the main draw.  The real star here is the gameplay, which seems to be channeling both Castlevania and Arkham City.  This is a stealth game through and through, but like Rocksteady's recent Batman titles, this is more about toying with your enemies.  After you've mastered the controls and built up your arsenal of attacks, you'll be an unstoppable force that bats his prey around like a cat before going in for the kill. 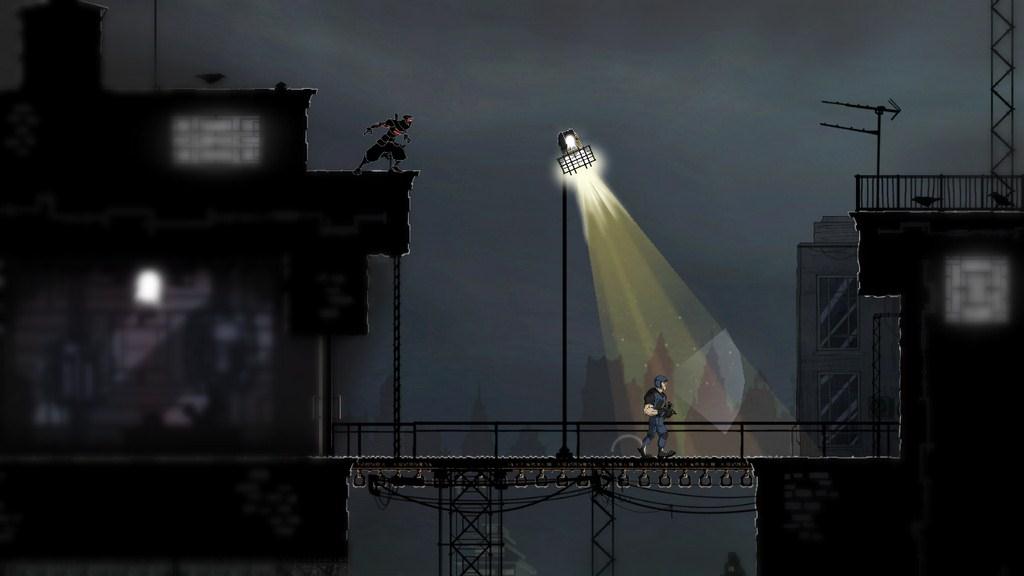 The game's thirteen stages are specifically designed with stealth in mind.  Each map is gigantic, full of wide-open areas, multiple paths and secret passageways.  Each and every scenario can be tackled in a number of disparate ways, from leaving everybody alive to killing every guard in sight.  The levels are flush with obstacles to hide behind, places to stuff dead bodies and explosive traps to set off.

Our hero has a few ninja tricks that will make avoiding detection a lot easier.  One hand holds distraction items, which include noise makers, smoke bombs, distraction flares and the trusty cardboard box.  In the other hand you get attack items, such as the Hisomu terror dart and the trusty spike mine.  Aside from these limited items, the ninja is also able to throw knives to break lights and get the attention of passing baddies.

The game mechanics have been honed to an inch of their life, creating an experience that is an absolute joy to play.  Even though we've already seen ninjas tackled countless times on dozens of game systems, Klei manages to keep the formula fresh.  Our tattooed hero is quick to respond and able to stick to walls without any fuss.  The game's superior mechanics made sure I never felt out of control and allowed for a lot of experimentation. 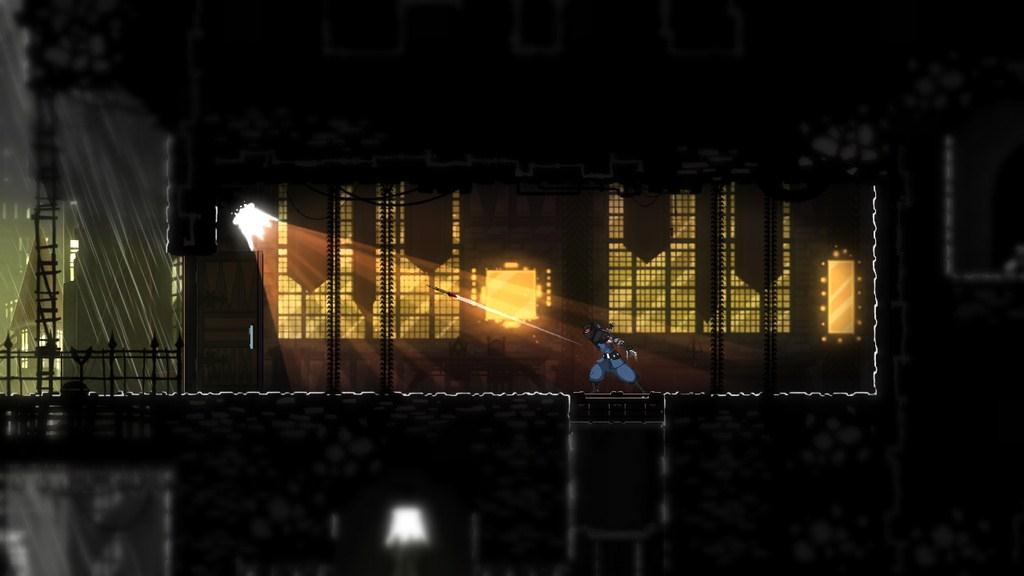 There came a point mid-way through where it all clicked.  I was one with the ninja; able to pull off every complex plan my mind was able to concoct.  I would dangle from the lights high above the action and pick off guards, then jump down and sneak up behind the few that got away.  I would use my terror darts to torment the weak, making them fire on their friends before eventually turning the gun on themselves.  I was a ghost, unable to be killed and ready for any and all battles.

Thankfully, the game was ready for me.  Each stage introduces a new wrinkle, forcing me to rethink how I tackle each situation.  Suddenly I going head to head with snarling dogs, oversized brutes and laser rooms.  Thankfully the level design also kept up, constantly giving me new ways to avoid detection and swoop in for the kill.  Forget the countless Tenchu sequels; this is the first game to truly make me feel like a ninja.

Don't be scared off by the stealth mechanics, Mark of the Ninja does not turn into a frustrating exercise in trial and error.  It also isn't one of those games where you spend two or three minutes hiding under a table.  What we have here is pure action, even when you're trying your hardest not to get caught.  Even if you accidentally alert the guards, there are plenty of ways to quickly escape that potentially deadly situation.  Much like Arkham City, our hero has a grappling hook that will take him out of the action at a moment's notice.   Or, if you're brave, you can stand your ground and fight.  Our hero comes equipped with a sword, throwing knives and those trusty action items. 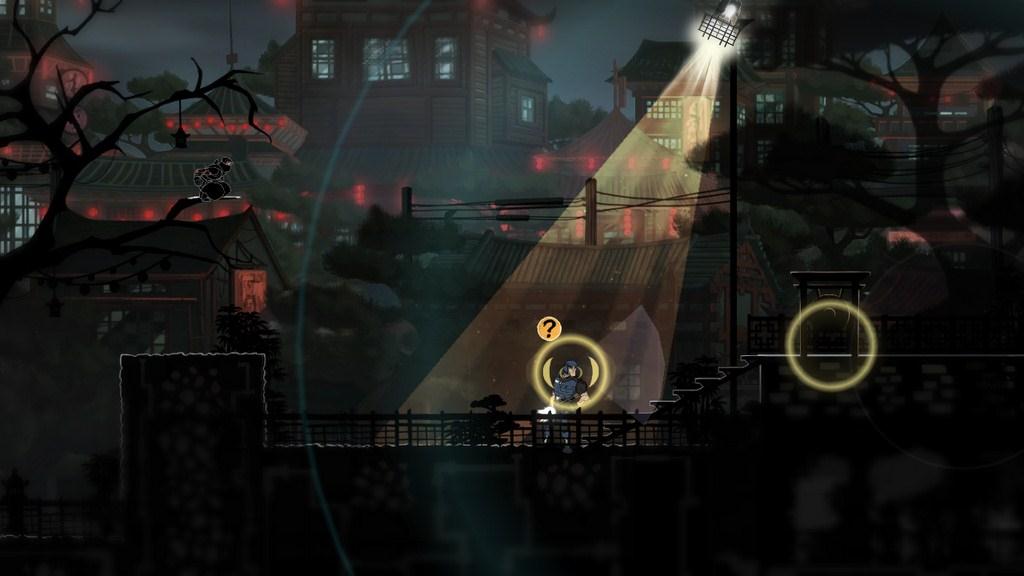 He also has his ninja senses to protect him, which is presented here as sound ripples.  You can see every step the enemies make, which is invaluable when plotting stealth kills.  There's no need for a Metal Gear Solid-style radar, every cue you need is presented on the screen.  When a light gets turned off, you'll see who else noticed the darkness.  When a dog barks, a giant blue ripple will let you know which guards were alerted.  It's little touches like this that make Mark of the Ninja so easy to play.

Each stage comes with its own set of goals to complete.  For example, one goal wants you to complete a level without breaking a single light bulb.  In another stage, our hero needs to be sniffed by every attack dog.  Sometimes the goals only apply to select parts of a stage, such as one that makes you ride a deadly elevator and another that wants you to find a generator in under a minute.  Each stage also has hidden scrolls to locate and three score markers to beat.  If you find everything, you'll earn nine points towards leveling-up items and techniques.

On top of the stage goals, you'll run into special challenge courses that take you out of the story for a few minutes.  These sections are completely detached from the rest of the game, warping our hero into a puzzle room.  There are no enemies in these challenge stages, just lasers and other obstacles to avoid.  If you're able to figure out the solution, you'll snag a scroll and be warped back to the main story.  These puzzles are a fun diversion from the stealth action, it's a shame there aren't more of them. 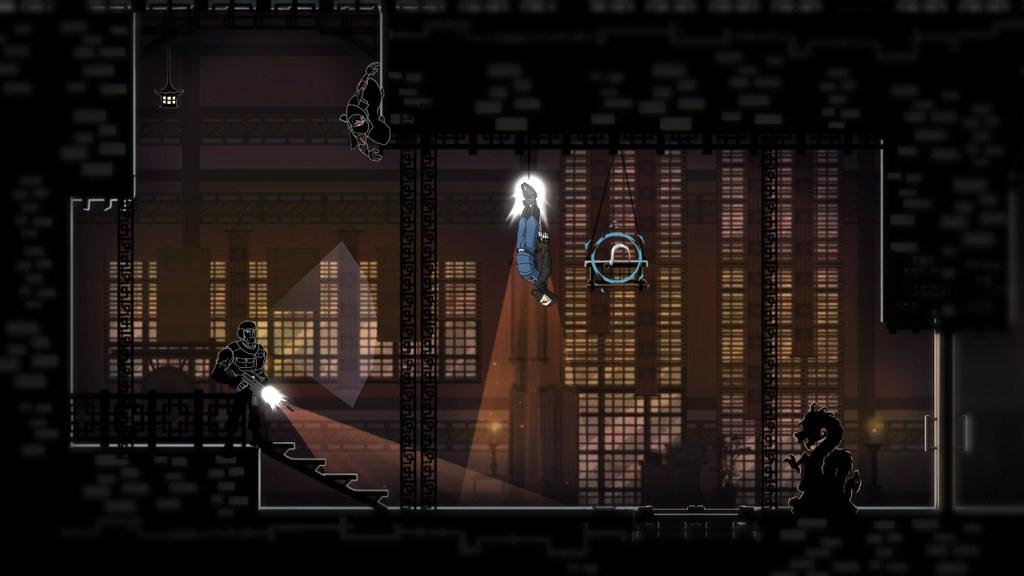 The thirteen stages take place in a diverse set of locations.  We start out in our peaceful dojo before moving on to several large buildings in Oshi City.  Before long we're castle crashing in what appears to be Eastern Europe, followed by the ruins of some Middle Eastern city.  The backgrounds are gorgeous, perfectly setting the tone for each new area.  While much of the world you explore is covered in darkness, you can still pick out small details that bring the stages to life.

It's the character graphics and animation that steal the show.  The hand-drawn graphics shine in HD, allowing for the types of comical reactions you might see in Saturday morning cartoons.  Sometimes it's the subtle features, like a guard shrugging when he loses your trail.  Other times it's more obvious, like the over-the-top expressions of a shell shocked baddie firing on his friends.  The wide variety of kills are also beautifully executed (no pun intended), complete with close-ups of body parts flying and swords going every direction.

The single-player campaign is generous for a $15 downloadable title.  I found myself putting in close to 15 hours, though much of that time involved me replaying stages to complete goals.  I can see you spending twice that time if you try to earn all the achievements, solve the challenges and take on the new game plus mode.  Needless to say, players will get their money's worth with Mark of the Ninja.

Eventually the story picks up and the twists and turns start taking hold.  By this time I had been completely won over by the super-responsive controls, stylish graphics and non-stop brutality.  I wasn't ready for an emotion ending that let me make my own fate.  I also wasn't prepared to fall in love with Mark of the Ninja like I have.  Even with its endlessly generic name, Klei's newest action game should not be missed.

Think there are already too many ninja games on the market? Think again, because Mark of the Ninja is one of this year's best games. With a lengthy campaign, stylish graphics, responsive gameplay and a surprise ending, Klei's newest action game is a must-own. Even if you're normally not into stealth games, Mark of the Ninja is well worth your time!