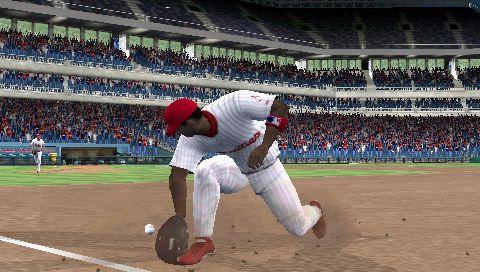 Written by Sean Cahill on 5/1/2008 for PSP
More On: MLB 08 The Show
MLB 08: The Show is back again, keeping most of the features that had made it a favorite for baseball gamers alike. With a revamped system and some new features, it looks like your PSP is just a flick of the power switch away from being your personal baseball simulator.

The game itself is based around how 2007 was “The Year of the Milestone”, giving you a few videos of the players who managed to hit their respective milestones. For instance, a video of Trevor Hoffman getting his 500th career save. Of course, this is just the lead-in for the game itself.

The game itself plays fairly well in the regular game modes. The pitcher-batter interface is fairly smooth and you get a bird’s-eye view from behind the plate in all situations unless you decide to change it yourself. I found that I enjoyed using the behind the pitcher view when I was pitching because it gives a more realistic view. There are a couple of issues with this in the actual Road to the Show Mode, but more on that later.

Getting back to the pitching, MLB 08 has given those players who are absolute junkies when it comes to being perfectionists on the mound all that they need to improve their ERA. You can analyze a batter’s strengths and weaknesses as well as where they hit the ball to the most in just about every situation you can think of. Want to know how to pitch a left-handed hitter with a right-handed pitcher with a runner in scoring position? It’ll show you percentages, the types of pitch the hitter tees off on, and other useful information. It’s downright scary how much you can study. 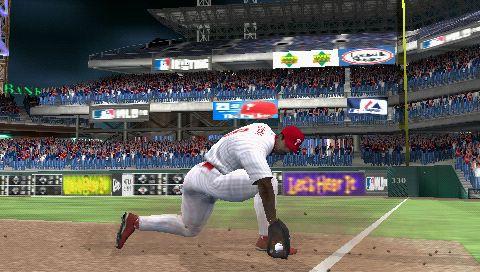 Hitting itself is quite enjoyable as well, although it does take a little bit of getting used to on the smaller screen. You have the option to attempt to not only guess what pitch is being thrown, but also selecting the quadrant that the pitcher is going to throw it to.

Fielding is a mixed bag. When you’re playing in the normal exhibition and season mode, it’s fairly straight-forward. MLB 08 has also added in a new fielding icon that gives you an indication if you can rob a home run or a ball that is in near foul territory. The downside to fielding is that throwing is far too simple. All you have to do is a press a button, with no control of strength whatsoever. On top of that, if you press it too early, the player won’t throw the ball, such as a player who hasn’t finished a fielding animation. My biggest issue with fielding, however, comes from inside the Road to the Show mode. I went through a season as a pitcher in the minors, and found out the “fun” part of doing so. Throwing is reversed on your buttons, so instead of throwing to second base when I hit the Triangle button, I would throw home. While it seems that it would make sense to keep the directions the way you’re facing, you get some major problems if you’re in an animation and the camera pans around on you. You can end up throwing to the wrong bag far too easily.

Another point that must be brought up is the in-game announcing. Matt Vasgersian does an excellent job of providing play-by-play while your color commentator, Dave Campbell, drops in from time to time with some fairly obvious commentary. They seem to balance each other out well, although they rarely seem like they’re ever talking to each other, which somewhat takes away from the experience.

When it comes to nit-picking the game itself, there are some more positives and negatives to pull out. One great positive is the lack of a framerate issue that plagued the previous MLB game on the PSP.

The game runs very smooth with little issue in player animation.
While some will probably complain at how large the ball can look at some point, you have to put it in perspective and remember that it’s a handheld, and you need to have it that large. On the flip side, there are some bad animations, and one that is downright comical. When you are in the camera view that is behind the pitcher, you’ll notice the lack of an umpire. A quick glance around the field shows that there isn’t an umpire anywhere in sight. A small lack of detail, but it takes away from the overall presentation. Now, building upon that, any time there’s a foul ball hit in that camera angle, you’ll watch the catcher reach back as if he’s asking for another ball. It’s downright hilarious to see him pull a ball from midair. Little things like that need to be fixed. Either that, or just don’t have the animation for the catcher. The combination of these flaws bring it down just a bit

Season mode gives you all of the regular bits of information that you expect. It?s not nearly as in-depth as you would get in a console mode, but that’s for obvious reasons. For what you get, though, it’s very well done. It’s simple to go through the menu system and find what you need, whether it be trading players, managing your lineups, or simply making changes to your pitching rotation. Tried, tested, and true, it wasn’t messed with too much, and this is a good thing. 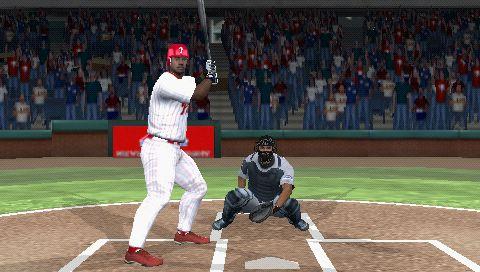 Of course, MLB 08's biggest draw is the Road to the Show, where you create your own player and attempt to make it to the Majors. I’m quite impressed with the depth that you have in this mode, from the amount of trainings you have to choose from all the way to being able to complain to your manager about your spot in the rotation. The amount of information you can read about your own player is also a huge plus, considering that it’s made up to be from scouts of rival teams who make notes on how to beat you. Reading these notes can make or break your player’s career.

The negatives to this mode, however, are somewhat glaring. Case in point, while I would be in the middle of an appearance with my pitcher, you get a goal to pop-up that you have to complete in order to receive training points. Sometimes, though, the game doesn’t seem to make sense. An opening goal, in most cases, will be to strike out the first batter. Even if you don’t do that, but you get the batter out, you normally get what’s known as a ‘Positive Outcome’, which isn’t necessarily getting the goal complete, but the way you pulled it off still meant a good result. My issue is that the game doesn’t seem to agree with what you would call a positive outcome. In that situation laid out, I managed to get a batter to ground out to first, yet the game deducted ten points from my overall score for training points because I didn’t complete the goal. These issues only popped up sometimes, but it certainly hindered my progress. On top of that, it can be very difficult to earn training points, especially depending on your position. I was having a difficult time building my pitcher up from scratch, although I did manage to get him to Triple-A by the second season. For what it’s worth, the mode is good for a portable, but it has its flaws.
All in all, the game itself is fairly solid. MLB 08 will give you a relatively deep experience with most of the game modes that you select, but there will be some headaches depending on how far you go. The Road to the Show mode will certainly give you a great experience away from your console, but it still could use some work. The framerate issues have been solved, which certainly improves the feel of the game. For those with the itch for baseball on the go, you will not be disappointed with this choice. It's worth the money.