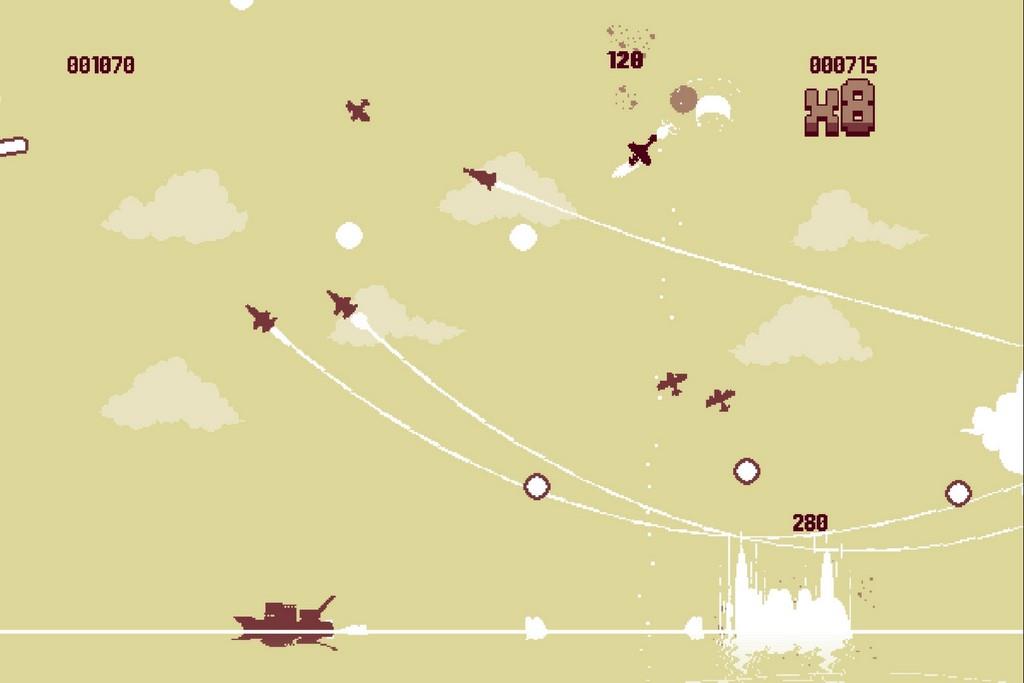 I am not a graceful man. My life is a constant struggle against the earth's gravitational pull; it strikes when I least expect it and it no mercy for my well being, or the well being of anything I happen to be carrying. When I first picked up Luftrausers, I was harshly reminded of this- I couldn't aim my plane to save my life, and I accidentally nosedived into a boat that became the tombstone for my watery grave. After a few more flights, I became accustomed to the simple controls, and for once in my life I was the picture of grace and elegance. Diving through streams of bullets unharmed and herding droves of rival planes into my deadly traps, turning and burning every last one of them.

Luftrausers is an arcade-style dogfighting game brought to us by Vlambeer for PS3, Vita, PC, Mac and Linux. It's being advertised as an arcade-style shooter, which I assume is in reference to its simple interface and short but addicting gameplay-but If I ever encountered Luftrausers in cabinet form, I'd fear for the safety of my wallet. Dear reader, I died. I died a lot. But every time I died I was so eager to get back into the sky I was pounding the 'Launch' button before my plane could finish exploding. Luftrausers is what you get when you take Hotline Miami to the skies. It's got that same quick and dirty, one-man-army style combat that you go through over and over again even though you know it can only end in a fiery wreckage.

In many ways, Luftrausers is a very small game. It has 8-bit style graphics, it uses a palette of seven colors, it only uses four buttons, and on average, and each flight lasts about two to five minutes. There aren't even any flags or national colors to separate you from your enemies- they're just faceless drones you shoot out of the sky, and your only allies are your hard-faced military superiors. They're a vaguely Teutonic looking lot that sneer at you from behind their clipboards as they mark your progress. The only identifying feature on them is the flying plane on their lapel pins- for all I know, I could be a test pilot for the Glorious Arstozkan Air Force.

While there isn't much plot to speak of, that doesn't mean there isn't a wealth of objectives and collectibles to keep you occupied.  As you play, you unlock parts to customize your Rauser (admittedly, I have no idea what Rauser means. Nena taught me that Luft is German for 'air', so I'm going to assume that Rauser means 'plane'). Like any infinitely complex and fine-tuned machine, your Rauser is made of three parts. A gun, a chassis, and an engine. Each part has a set of missions associated with it, and when you complete those missions, you unlock more parts. Each part changes the stats of your Rauser and grants it a new ability, and the missions for each part focus on utilizing their strengths and overcoming their weaknesses. For example, the submarine engine that lets you fly underwater unharmed has a mission that requires you to sink a certain number of boats- makes sense, what else are you going to do with an underwater plane? But further down the line, you're given a mission that requires you to shoot down an Ace figher. And staying in the air for long periods of time is definitely not in the mariner plane's forte. In addition to unlocking Rauser parts, you can also unlock color palettes for the game. Are you sick of playing in a bleak, sepia toned battlefield? Well, you can switch to the greyscale palette that makes you feel like you're in a WWII propaganda film! Still not satisfied? How about the super-80's neon palette that makes you feel like Ender playing a bug-killing simulator? 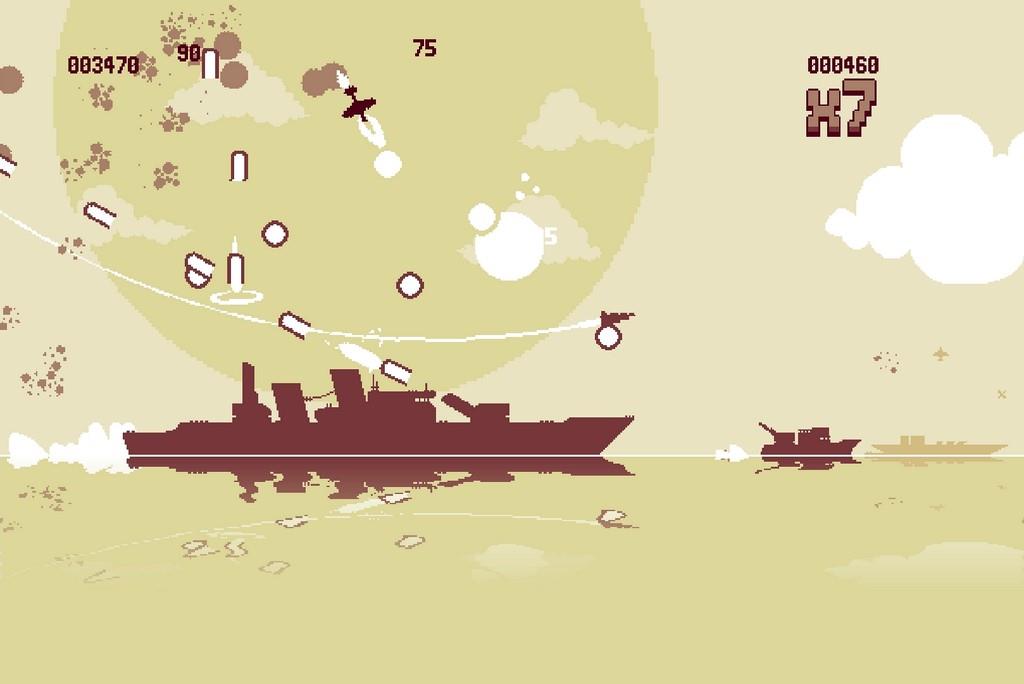 Like any game with customization, half the fun of Luftrausers is creating crazy planes and figuring out how to use them. I love that Vlambeer went to the trouble of naming every possible combination of parts. There's "The Fist of God" that has an anti-gravity engine and a chassis that drops a torpedo as it fires a gigantic plasma-ball from its cannon; the "Nightmare" that is immune to melee damage, can go underwater, and fires a laser beam; or the "Bob Raus" thatwho cares what it does it's called BOB RAUS. The gameplay is an entertainingly vicious cycle of selecting a loadout, playing with it until you master it or get bored with it, and switch to an even crazier loadout that completely renews your interest in the game. While many of the parts only grant you a minor stat change or ability, there are a few that force you to completely change your gameplay strategy. Take for example, the Nuke chassis. When you die, the Nuke kills everything on the screen- so the game becomes less about shooting down as many planes and boats as possible, but about gathering as many of them as you can in one place for when you make your dramatic exit.

Each flight starts out by throwing a couple of planes at you; as you kill more and more of them, a greater number of reinforcements are sent in and more difficult enemies are released onto the battlefield. If you shoot down planes fast enough, you'll see your score multiplier start to rack up until it maxes out at x20. Unlike other arcade-style games, your score actually means something here, because when you die, your score is added to your total experience. As you level up, enemies start coming down the pipeline faster, making it easier to rack up more kills and get you to the higher level enemies faster. Eventually, you unlock SFMT mode (I have no idea what that stands for. I googled it, but something tells me that Vlambeer isn't trying to raise awareness of the San Francisco Mime Troupe). SFMT mode throws every enemy at you at once. You still have constant reinforcements coming at you, but instead of them coming in at a somewhat manageable pace, you are instantly thrown into a bullet hell scenario. When you unlock SFMT mode, you're given a whole new set of missions to unlock the super-secret-totally-classified-top-tier Rauser parts.

When you've been playing Luftrausers for so long, the difficulty spike that comes from gaining levels is great because it keeps the gameplay challenging, and since you're getting more enemies thrown at you, it makes some of the missions easier to accomplish. But for some reason, I have no idea why, you are only allowed to have one save file, which makes it impossible to let your uninitiated friends play your game. Sure, the game is difficult at any level, my friends are going to  want to have a fighting chance when I first throw them into the game. And if I'm at level ten, they won't last a second. Sure, you can replay the tutorial whenever you want, but as soon as the game teaches you the basic controls, it throws your right into the level ten mayhem- which they aren't going to survive for a second, especially if it's on SFMT mode. And what happens if I put the game down for a few months and try to come back later? I'm not going to be in top-Rausing condition, and I don't want to completely erase the progress I've made. This infuriates me to no end, because it makes no sense that I can't have another save file- but it should also speak to the quality of the game that my biggest gripe with it is that I can't have multiple saves so I can share it with my friends.

The easiest way to summarize Luftrausers is to call it the Hotline Miami of dogfighting games. It's incredibly difficult, but it's really good at sinking it's claws into you to keep you launching your planes onto the battlefield. It's a game that's really easy to binge on, but since it naturally comes in bite-sized battles, you might get a bit more staying power if you get it on the Vita and play it a couple hours at a time.