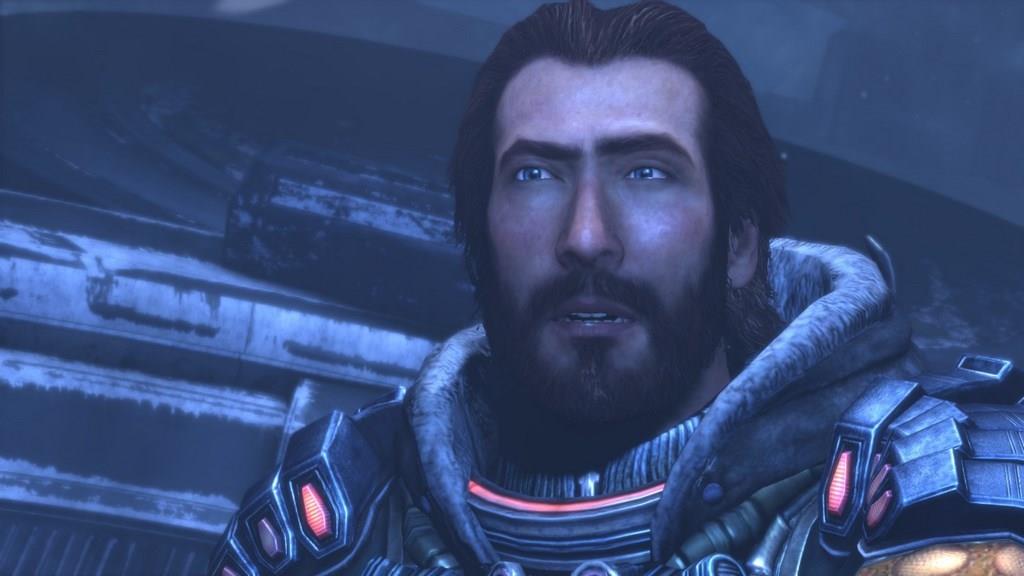 Written by Jeff Kintner on 9/23/2013 for PC
More On: Lost Planet 3
In case you didn't know, Lost Planet 3, the latest installment in the Lost Planet franchise is a prequel. LP3 takes place decades before the events of Lost Planet: Extreme Condition.  Earth is in the middle of an energy crisis- resources are scarce and the future of humanity is uncertain. The NEVEC corporation has decided to send a primary wave of colonists to the distant planet E.D.N. III to research its abundance of Thermal Energy and see if it could help save the human race. But as soon as you land on E.D.N. III, it becomes apparent that there are cracks in NEVEC's story.

You play as Jim Peyton, a contractor working for the first wave of colonists on E.D.N III. Meaning that the other colonists come to you with jobs (i.e. quests) that usually involve killing a lot of Akrid, fixing equipment, and harvesting Thermal Energy. Peyton seems to be some kind of cross between a prospector, mechanic and a cowboy- he's come to E.D.N. III so he can make as much cash as possible to provide for his family back on earth. He also happens to look exactly like Nicolas Cage. Jim Peyton tries to maintain that he doesn't care about NEVEC or what it does, he only cares about providing for his family. But the more he discovers about E.D.N. III's history, he becomes more entangled in its internal affairs, unearthing a lot of unpleasant details that NEVEC has gone to great lengths to cover up.

It seems as though the only reoccurring character in Lost Planet 3 is Gale Holden- the father of the protagonist of the first game. He has little relevance to LP3's story until he becomes sort of a sidekick near the end. Gale spends most of the game as a shopkeeper that upgrades your RIG for you. Instead of the military-grade VS suits you get in the rest of the Lost Planet series, in LP3, you get a construction RIG. Your RIG never gets any guns or other explicit weapons, just a grappling hand, a drill and a torch. It is, however, really good at smashing through ice and stepping on Akrid.

LP3 takes a few aesthetic elements from survival-horror games, but I would hesitate to call it anything but an action-adventure title. LP3 doesn't really follow conventional survival-genre techniques that make you scrape and scrounge for resources. It's the exact opposite, actually. Your hazard suit keeps you from freezing to death and as long as you're near your RIG, your health regenerates faster and you can reload your weapons any time you need. But if you aren't within your RIG's umbilical range, you not only lose your easy health and ammo, but you lose your entire HUD. Not only is your minimap powered by your RIG, but your weapon loadout info is too- it tells you which guns you have equipped and exactly how many bullets and grenades you have left.  Fortunately, even if you are away from your RIG you get a rough idea of how much ammo you have through two little bars under your gun reticle. 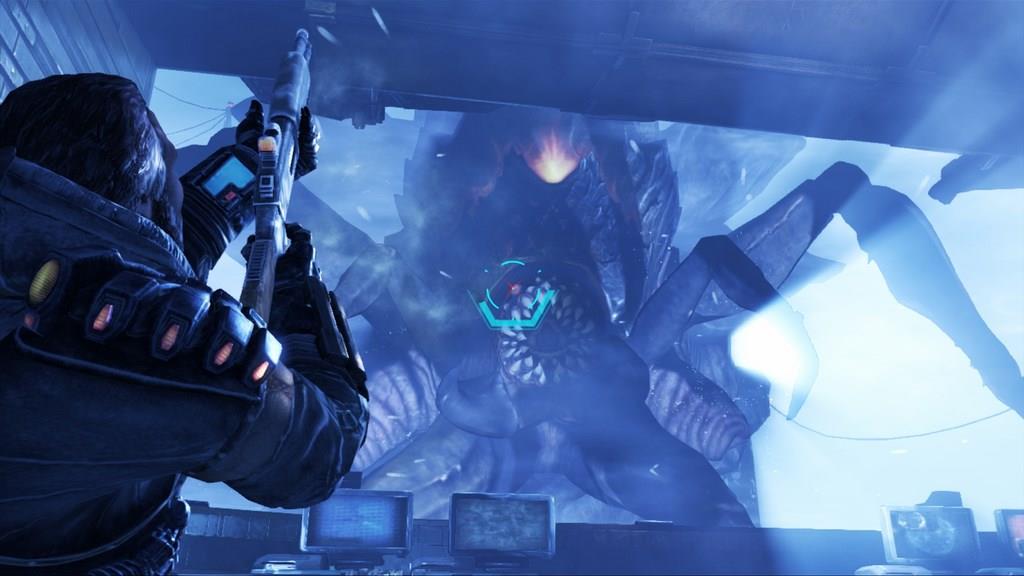 This isn't a conventional survival story like Resident Evil or Don't Starve, because it isn't about managing your resources and making every shot count. LP3 emphasizes our dependence on community and technology, and surviving in an environment where all your comforts have been ripped away from you. Jim Peyton is a man that left his family back on earth in order to provide for them by killing Akrid and harvesting T-Energy. But even on this distant planet, he's found a tight-knit family with the other colonists on the Coronis Station. To provide for his new family and his old one, Jim picks up jobs that require him to brave the elements and work to keep the colony alive. In a similar vein, fighting near your RIG is relatively easy- it's got unlimited health and ammo, it feeds you important information on where your enemies are, it lets you swap out your shotgun for a grenade launcher. But when you break umbilical range, you leave the comforts of home. You are left by yourself where anything can sneak up on you. Later on, the time comes where you have to defend your new homes- the Coronis station comes under a massive Akrid attack and Jim has to clean it out and find out why the Akrid suddenly attacked before everyone gets killed. Around the same time, his RIG gets an upgrade that turns it into a drilling platform that mines huge sources of T-energy, but attracts hordes of Akrid. It still feeds you health and ammo, but instead of your RIG protecting you, you have to protect it and makes repairs between waves of enemies. I have a huge nerd-boner for form and content, so my favorite aspect of LP3 is how well the gameplay compliments the overall themes and story. Unfortunately, it's doesn't make for the most difficult gameplay; so if you're looking for a challenge, make sure you set the difficulty to hard.

The only big letdown LP3 had for me is the RIG combat. My first thought when I saw that giant mech was 'Aw man, I can't wait to fight a giant monster in that thing!' But when the time came to go toe-to-toe with a gigantic Akrid, I was disappointed by how heavily they relied on quick-time events and how muddled and confusing the combat was. Admittedly, I shouldn't have been surprised by the quick-time events- it makes sense that the RIG uses the same controls to fight as it does to repair a broken winch, but I found myself wishing I could hop out of the RIG so I could just shoot whatever it was I was fighting. It just wasn't as satisfying to fight in the RIG, even if it was more gruesome. 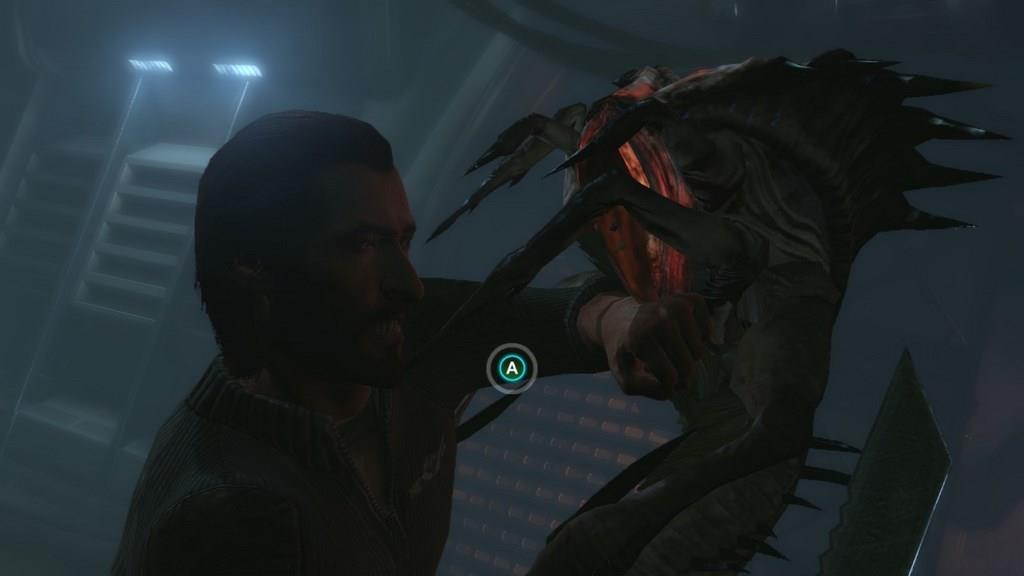 LP3 is available for Windows, Playstation 3 and Xbox 360. I played through Steam, and after using the keyboard for the opening sequence, I immediately switched over to my 360 controller. They keyboard mapping is clunky and counterintuitive. You use WASD to move and look/shoot with the mouse, but the rest of the actions are placed over almost the entire keyboard. Maybe I just have tiny hands, but I had a difficult time stretching from D to G when I wanted to throw a grenade or B when I wanted to melee, and I can't for the life of me figure out why picking up ammo would be set to P. I tried remapping the keys, but it was too complicated. Just trust me on this one- if you have LP3 for the PC, don't even bother with using your keyboard and mouse, just plug in a controller. You'll be glad you did.

Once I got my control situation figured out, I was sold on LP3. The story takes a bit to get some tread, but the action comes at a steady enough pace and in a variety of ways to keep you locked in to playing LP3 for hours at a time. If you're new to the Lost Planet franchise, LP3 is a good place to start. It gives a lot of background info on the NEVEC corporation, without going over your head too much to reference the rest of the series. It's a compelling story about colonial expansion and extortion wrapped in a PG-13 action-adventure.
Even if you haven't played any of the other Lost Planet games, Lost Planet 3 is a great game with a lot of action and a good story.