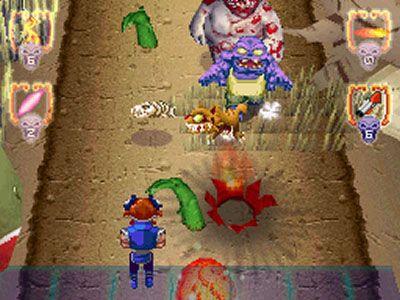 With a name like Little Red Riding Hood's Zombie BBQ (which isn't much shorter when you abbreviate it to LRRHZBBQ) my first instinct was to think that this was some sort of food game, after all this is the company that is bringing us the Iron Chef America game. But it's not; instead it's an old school overhead shooter that has you taking out all sorts of nasty zombified characters. It's sort of a cross between Capcom's brilliant (and criminally overlooked) Cannon Spike and a traditional light gun shooter, only with a bigger emphasis on humor and zombies. 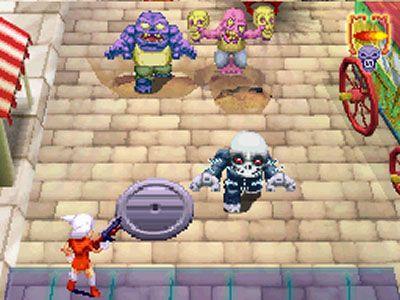 You play the game as either the busty and beautify Red Riding Hood or the curiously out of place (but no less awesome) Momo Taro, a ninja who loves his grenade launcher. Together they intend to take back Fairy Tale Land, which has been overrun by an army of zombies. How bad have things gotten in Fairy Tale Land? Well, these brain-addicted zombies have feasted on the succulent ham of the Three Little Pigs and the sawdust brain of Pinocchio. So yeah, I would say things are going to hell in a handbag ... or in this case, a picnic basket intended for grandma.

The core gameplay is incredibly simple; you take control of one of the two characters, both of which never leave the very bottom of your screen. They can walk left and right (either by use of the d-pad, face buttons or by tapping the bottom of the screen), and when enemies pop up they can shoot at them. You accomplish this by pointing your stylus at the direction you want to shoot, lifting it to reload and double tapping the screen to unleash a huge bomb/grenade. On top of the basic attacks (a machine gun if your Little Red or ninja throwing stars if you're Momo Taro), you can also pick up powerful bonus weapons, including a flame thrower, laser gun and a trusty shotgun. Outside of that there isn't much to the game, so learning how to play is a breeze.

The brilliance of a game like Little Red Riding Hood's Zombie BBQ isn't that it's incredibly deep or features hundreds of hours of gameplay. Instead the game works because it takes a tried and true old school theme and flips it on its head. You have never played a 2D vertical shooter like this before, which is really saying something when you consider the thousands of 2D vertical shooters that have been released over the years. This game manages to offer us something new, all while giving us a compelling shooter that you'll want to go back and play over and over again. It's not perfect, but I cannot think of a better old school shooter released in the last few years. 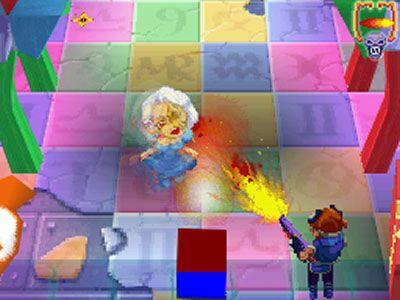 On top of some inspired levels (including grandma's house, the zombie infested town of Hansel and Gretel, Pinnochio's toy shop, Sleeping Beauty's castle and even the North Pole to battle an evil Santa Claus), you are also treated to a number of extremely difficult boss battles. Like any old school-inspired game, these boss battles require both good reflexes and memorization. The bosses start out strong, too. The very first battle you have to deal with is your zombified grandmother, who somehow managed to figure out how to control her bed and throw dozens of her false teeth at you. From there we get a tank driving Little Pig, a gigantic Pinocchio and much, much more. You can tell that the developers had a lot of fun brainstorming crazy ideas, most of which apparently found their way into this exciting action game.It would be easy to write off a game like Little Red Riding Hood's Zombie BBQ as nothing more than a repetitive shooter, but developers EnjoyUp have done enough to make each level unique and interesting. Not only does every level look completely different, but you also get brand new enemies on every stage. What's more, the story is a lot of fun and, most importantly, actually really funny. Throw in addictive gameplay that is easy to learn and you have one of the best Nintendo DS games of the year.

Although it may not look like it from the screenshots or videos, Little Red Riding Hood's Zombie BBQ is the type of game you can only do on the Nintendo DS. The game uses the system's dual screens in creative ways, giving you twice as much to look at and allowing you to be prepared for the oncoming attacks you will need to dodge. Sure, you could probably take away the touch screen aspect and turn this into a traditional overhead shooter, but the way it controls is half of the fun. My only real complaint with the game's controls is how you unleash the mega bomb. While double tapping the screen to unleash it sounds good on paper, in practice it's just a little too easy to do by accident. Still, this minor gripe doesn't ruin an otherwise solid control scheme. 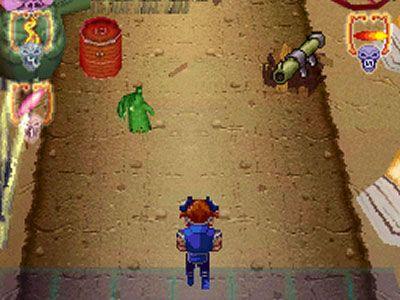 Like all old school shooters, Little Red Riding Hood's Zombie BBQ is over far too quickly. That's not to say that it doesn't have enough levels, but in a perfect world this game could have been twice the length. To compensate for the game's length, EnjoyUp has given us two extra unlockable modes. One mode is the Boss Attack Mode, which has you rushing from one boss to another. The other mode is the Survival Mode, which has you racing against the clock as you fight off wave after wave of enemies. These modes are fun, but nothing revolutionary. Either way, if you're a fan of old school shooters then you're definitely going to get your $20 worth out of this game. That's right, $20. Not only is this one of the best Nintendo DS games of the year, but it's also one of the cheapest.

Little Red Riding Hood's Zombie BBQ has a lot going for it, from a solid art style to fun twitch controls to challenging bosses that you won't soon forget. Throw in some funny humor and a silly story and you have a must-own action game for anybody who loves old school vertical shooters. I'm one of those people who for years said that there was nothing you could do to freshen up the 2D vertical shooter genre. I'm happy to say that Destineer and EnjoyUp have proven me wrong.
Who knew that one of the best Nintendo DS games of the year would be called Little Red Riding Hood's Zombie BBQ? Silly name aside, this is one of the most creative action 2D shooters I have seen in a long time. At $20 it's hard to go wrong with this addictive little overhead action game!