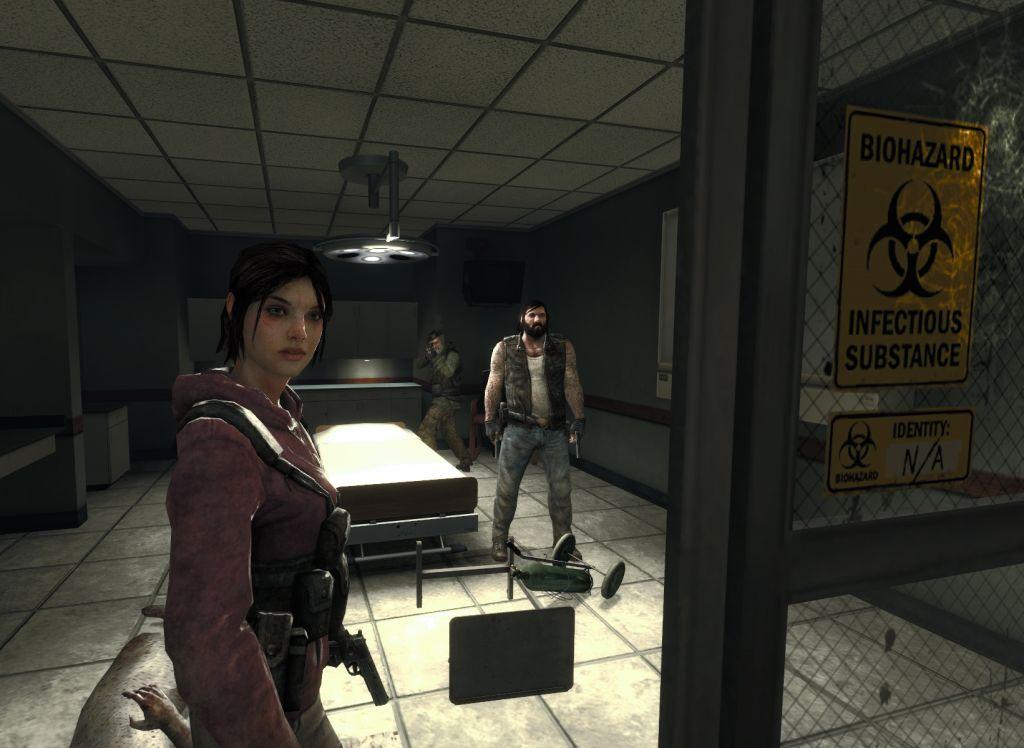 Written by John Yan on 11/19/2008 for PC
More On: Left 4 Dead
Zombie apocalypses seem to be pretty popular these days. Most of these movies involve a band of survivors working their way to a safer area while battling out with brain eating creatures.  This sounds like it would make a great game doesn’t it? In comes Valve Software and they’ve put their talented team at trying to recreate the suspense, action, and gore of zombie movies in Left 4 Dead. After spending time with the demo and the full game, I have to hand it to the folks at Valve. They’ve churned out another high quality release and one that’s sure to get plenty of play now and in the foreseeable future.

A lot of what the co-op features are in the game can be viewed at in my first impressions. I won't go too much into it in this review so let's get to the rest of the game.

Left 4 Dead, at the core, lets you play as one of four survivors who are immune to being infected. There’s the grizzly war veteran, the hard-nosed biker, the officer worker, and the co-ed. Nothing special in terms of gameplay separate the four but they each have their own little personality and unique commentary as you progress through the game.  The basic premise of the game is you’re working your way through five different areas infested with zombies to a landing pad where a helicopter can whisk you away to “temporary” safety. It’s not much in terms of plot but then again, what zombie movie is?

In your way are six different types of zombies. The horde are your normal looking infected humans that lumber towards you or run really fast. You’ll see both scenarios as some will charge you quickly once they take notice of you. These guys are pretty mindless but they can create a good amount of damage in packs. The smoker has a long tongue that can latch on to survivors and drag them towards it. They are named smokers because once you kill them they blow up in a choking induced cloud of smoke. Boomers look like fat, bloated fiends with boils in various places. If you get vomited on by one, expect a large group of the horde to come charging towards you. It’s like being IT in Gauntlet II; they all come running to the one covered in puke. The bile also has a nasty side effect of making your screen horribly slimed and impossible to see until it wears off. A nice surprise when killing one of these guys is that they will explode and anyone in close proximity will be covered in horde catnip. Hunters are quick pouncing zombies that are akin to those found in the movie I Am Legend. They’ll pounce on you and keep you grounded until one of your friends can push it off. The tank is just a zombie of brute force that takes a good deal of punishment to bring down and can also dish out a good amount as well. Finally, the witch just wants to be left alone so avoid her at all costs because she’ll claw you to death pretty quickly. When walking by one it’s best to stay away and to turn off your flashlight so you don’t bother her. While there aren’t that many variety of zombies, there are enough here and of good variation to provide some fun and exciting enemies to deal with.

Looking at the models, the Source engine does a great job in rendering horrific looking zombies. While the variety of models aren’t that numerous, what you do see are high quality specimens that would do any George Romero movie proud. The witch’s lanky appearance and the tank’s Hulk-like physique really exhibit the look and feel of what you would think these monstrosities would be like.
The animations are top notch for the game and the zombies move so fluidly from strolling around to climbing up on top of ledges to get to you. Valve has done an incredible job in recreating how zombies moved to a T. The movement and animation quality really sets this game apart and helps create an incredible atmosphere when you see a horde of zombies come charging towards you ready to eat you alive. 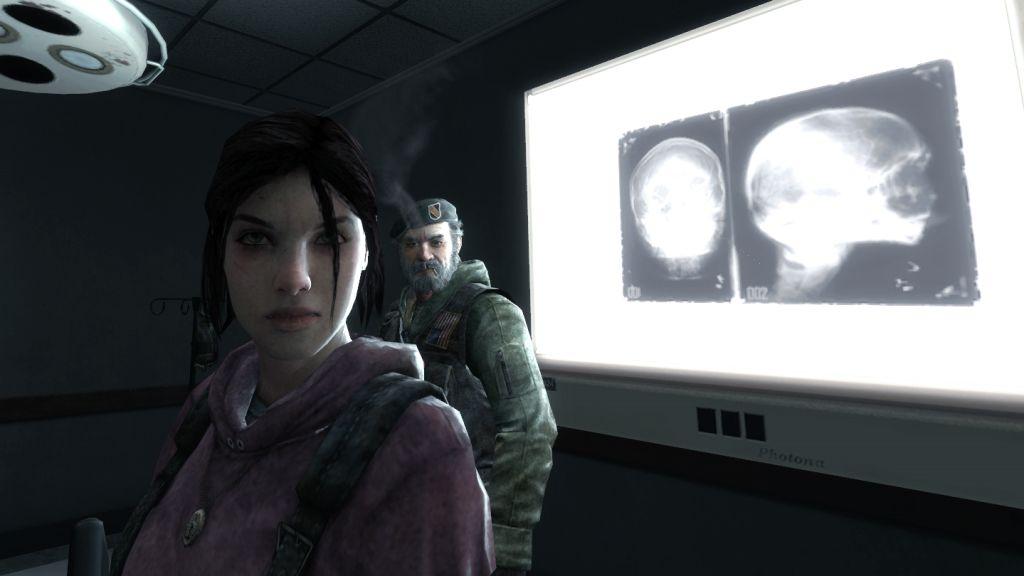 Four different campaigns are available for you guys to battle through with various types of environments to experience. All the levels are nicely modeled with great detail. There are furniture and random items that litter the rooms to make it seem more realistic. The attention to detail is pretty nice and for those that were fans of the graffiti in Portal, they make their appearance in several areas as well in Left 4 Dead. What’s great about each level is there are multiple areas in most places where zombies can come charging in.  It’s because of this you’ll always be on guard and trying to keep an eye out on as many areas as possible. It adds a lot to the suspense because you just don’t know where they’ll be coming.

Something that’s prominent in a lot of zombie movies is their ability to break doors in pieces to try to get to you. The Source engine, as you may know, is a capable of this and the developers put it to good use. There were a few times I shut the door to try to slow down the zombies or get a breather only to see parts of the door start flying off and zombies trying to reach through the holes. It’s an effective feature that really brings forth the spirit of zombie movies.To heighten the feeling of dread and horror, many areas are low on light with only your flashlight giving you a clear but limited field of vision. Since the lights are attached to the weapons, it creates an interesting strobe like effect on the zombie faces when you are in the middle of a reload as well as when the weapon kicks up when being fired. It’s pretty cool to see glimpse of rotting faces as you run around and fire your weapons. Seeing those quick flashes of angry zombie facial expressions will have you feeling like you’re right in the middle of a movie.

Your weapons of choice include two types of shotguns, an assault rifle, dual pistols, a sniper rifle, and an Uzi. The shotguns have a nice throwback effect on incoming zombies sending their bodies flying backwards. The Uzi and assault rifle are great for mowing down a group from a distance. As always, aim for the head for the best results. Besides the basic firearms, you’ll also have the ability to hold some Molotov cocktails or pipe bombs. Ammo is sparse so you’ll get into spots where you’ll have to rely on your pistols, which have unlimited ammo, heightening the feeling of suspense. You won’t be entirely vulnerable having just your pistols out but it’ll be a lot tougher this way. You can also use some items laying around to take down the infected. Throw and shoot at a gas can to ignite the area and toast the rotting flesh off of the undead. Some areas will also house a minigun that heats up red when unloading the ammo on the charging horde. If you are getting surrounded by zombies, you can always use your melee attack to push them off or bash them with the gun. I would’ve liked to have seen some bladed weapons but alas the few weapons that are available will have to do. 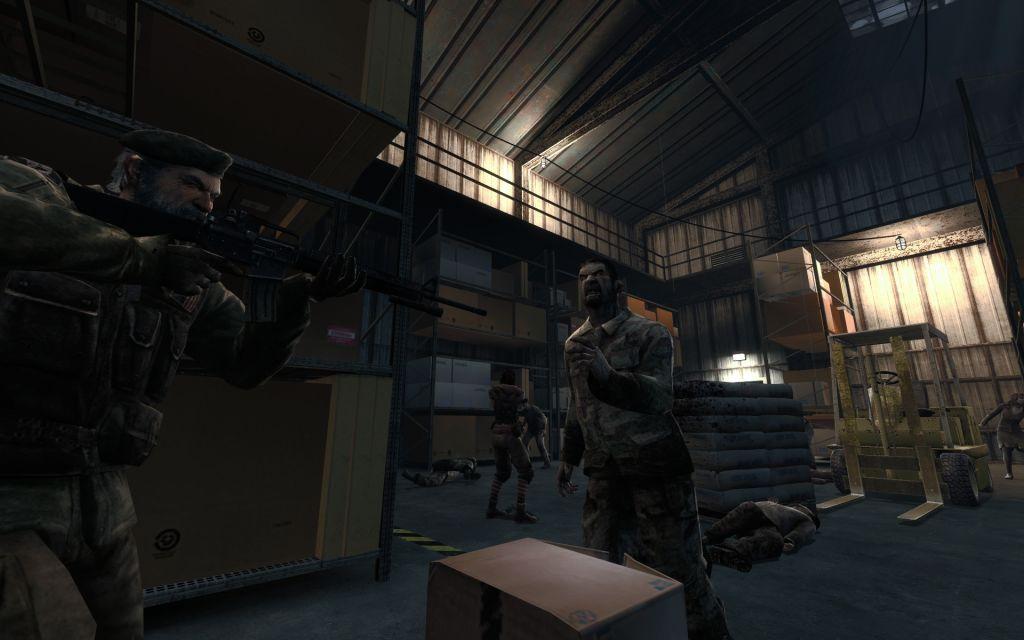 So the campaign is pretty short and you’ll probably finish it in less than half an hour. While the game can be quick to play, the level of replayability is increased by a few factors. First of all, there’s an AI director that will add or remove zombies from areas depending on how you are doing. If you’re not such a good player, expect less zombies. Those that are experts in FPS games can see more groups and more specialized zombies. Zombies can also appear from different places as dictated by the Director so playing through it multiple times can turn into different experiences.
Single player is OK but where the game really shines is having three other friends join you for the ride. When hopping into various multiplayer campaigns, each time it was completely different because of the different placement of the zombies and the different way people play. Some stick together better than others, some coordinate better. Playing with a wide variety of people is half the fun in trying to survive a zombie apocalypse.

Versus mode is an interesting feature but only available on two campaigns. Up to two groups of four can play each side: survivor and zombie. Those that play as survivors will not find anything too different. As the zombies, you’ll have the ability to spawn as a random specialized undead with the exception of the witch. You’ll be able to see your teammates as well before they spawn so you guys can plan out how and where you want to attack the survivors. Once spawn, you’ll most likely die quickly unless you are really good at ambushing the other team but you’ll get around 25 seconds or so to plan your next attack when you respawn. Once the survivors reach their goal, the roles are reversed and you’ll get to see the scores at the end of each round to see how each team does. Having humans as zombie enemies really adds to the variety of the game because it’s always harder to go up against “non-cheating” enemies and it’s just more fun. I’m hoping the other two campaigns are added in later on down the road for Versus mode as I’d love to play more of this game type. 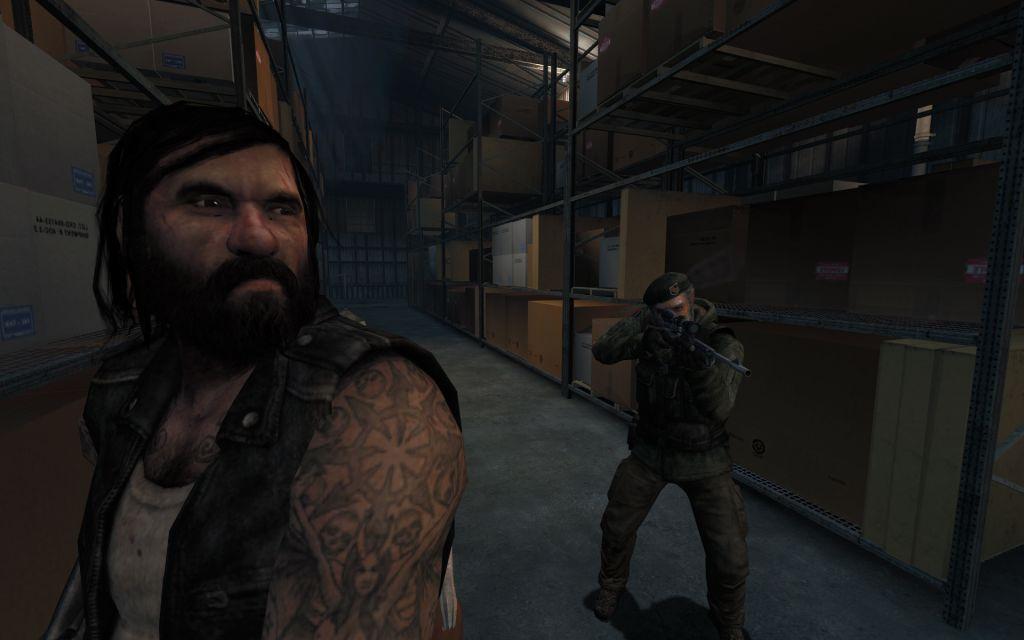 What Valve Software has done is created a fun little game where cooperation is the key and zombie killing is the name of the game. Left 4 Dead offers fun gameplay for up to four folks in campaign mode and eight people in versus mode. The game is short to play from start to finish but there’s a good amount of replay value in there. Graphics perfect recreating the atmosphere of zombie movies perfectly from the use of lighting effects, filter effects, inspired architecture, high quality models, and smooth animation.  If I know Valve, I’m expecting many free additions to the game. I’d love to see some more campaigns, weapons, zombies, and gamepl ay modes. I feel Valve’s Left 4 Dead is just the tip of the iceberg and I want more. Let’s hope they deliver but until then, get three of your close friends and free the world of the infected, one bullet at a time.
While it's a short campaign for all four, the game's solid as a rock and offers a good deal of replayability. The graphics and animations are some of the best I've seen for a zombie game and having three others play with you is just a load of fun. Playing as the zombies is also a nice feature as well.