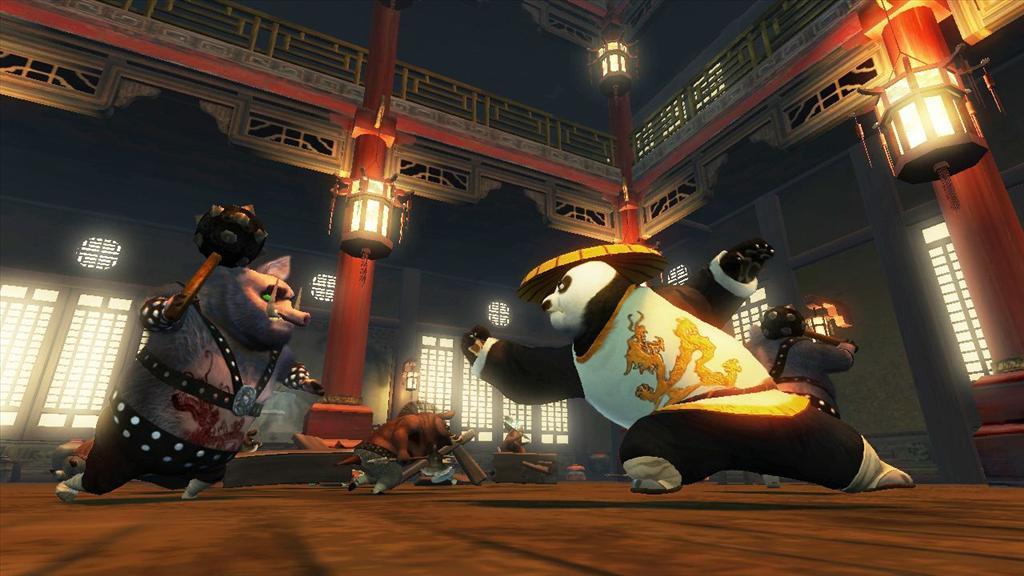 Written by Randy Kalista on 7/8/2008 for 360
More On: Kung Fu Panda
Luxoflux didn’t develop Kung Fu Panda in a vacuum. You can tell that they love video games -- paying attention to beat ‘em ups in particular -- and have scrawled some useful notes along the way. There are echoes of God of War in their quick time events and snapshots of the Incredible Hulk when hurling barrels across a courtyard. There’s some Sonic the Hedgehog when rolling headlong into half-pipes lined with Chinese coins, and a bona fide head nod to Frogger in some watery platforming scenes. A storm-wrought chapter flying through thunderheads hearkens back to 1983’s Star Wars arcade stand-up, while the multiplayer fighting takes place on multi-tiered Super Smash Bros. Brawl arenas. There’s even enough love to go around the multiplayer side to open the doors for match-three Bejeweled aficionados, as well as Memory card flippers using the game’s characters hopping across a life-size board.

The trick behind Luxoflux’s particular trade, however, wasn’t just masking all of these influences behind the curtain of a summer popcorn flick: It was working within the bounds of a fictional universe not wholly their own, nurturing the gameplay to stand (and then walk) on its own two feet, and complementing the lore of Kung Fu Panda the movie without reducing the video game to a paint-by-numbers walkthrough of the script.

In those respects, the Kung Fu Panda video game is going to surprise some folks.

Not only does the game loosely-enough parallel events of the movie, it takes its artistic license beyond predictable bounds and introduces new bad guys and environments that patch themselves into Kung Fu Panda’s pastiche. Still, there are plenty of martial arts movie tropes Luxoflux indulged in, paying homage to classic martial arts movie ideals that would leave Kung Fu Panda feeling amiss if it went without. 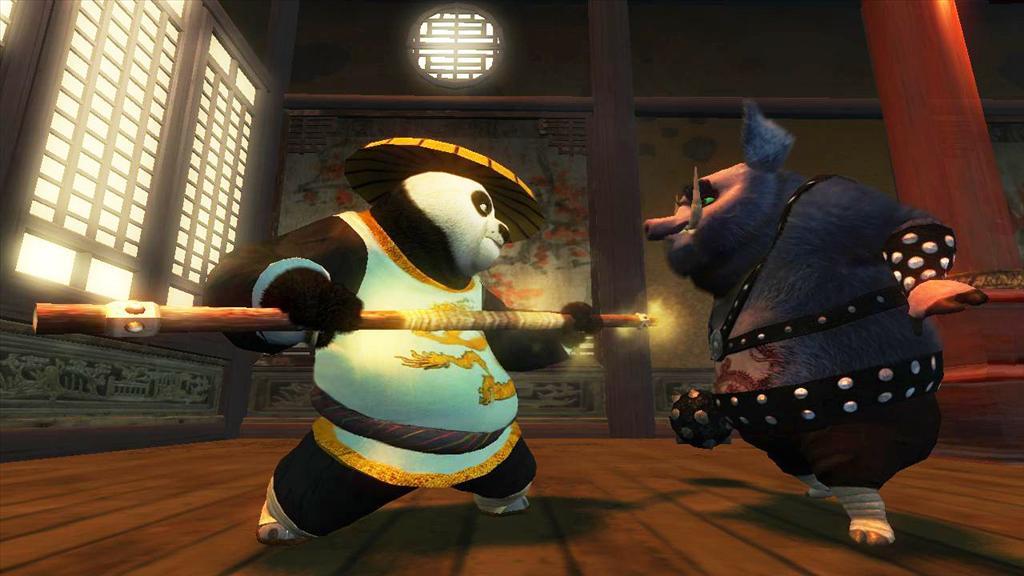 Fighting takes place everywhere it should: In the furniture-heavy teahouse, on the serene lake surface, up to the mountaintop temple, swinging through the tree branches, across the rooftops of a peaceful village. Likewise, boss battles crop up within neatly-crafted arenas: In the cobblestoned coliseum, across canyon-spanning bridges, in a treasure-laden palace. All of which are painted with a minimalist aesthetic (by contemporary push-the-pixel standards) which, again, is in keeping with classical Chinese art: A pagoda at the crest of a vertical rise, or at the iris of a lily-padded lake; a wide-bottomed boat swaying through a river canyon; or a peach blossom tree silhouetted on a cliff’s edge. This speaks highly of the concept artists’ attention to detail as well.

Some of the game’s storytelling, however, is obviously stunted by the need to balance its own side stories with that of the movie’s overarching narrative. The fog-at-dawn Lake of Tears is a gorgeous location that doesn’t exist within the film, but Po the Panda undertakes a save-the-turtle-hatchlings mission that bears no relevance to the main story -- other than to perhaps reinforce that Po is the people’s hero, willing to backburner his own quest in the interests of quelling any disturbance of the peace. In another out-of-sync chapter, Po makes his way with feline grace across wolf-inhabited woodlands to face a trio of moonblade-spinning Siamese cats … for reasons no more definable than Po got lost somewhere during his travels and was hoping to grab a warm meal.

Not including the film’s prison which housed banished bad guy Tai Lung is a questionable oversight, however. And, given Tai Lung’s ambiguous intro into the game, the sense that an ultimate bad guy even exists is a vague concept. Without the story’s narrative not feeling as though its driving towards a singular confrontation with Tai Lung, Po’s legend spreads out as more of “a hero walks the land” set of mini-module adventures as opposed to the ramping culmination of a martial artist’s training coming to a head with his destiny.

The game’s Jack Black impersonator is often spot-on in his delivery, though the between-chapters voiceovers dip into staid storytelling, attempting to tie in the movie’s actual script with a bottom-to-top scrolling of the events in text. The tie-ins are told with character, but with less creativity.

What’s more out-of-character is Master Shifu’s resonating doubts in the movie being replaced with pleasant surprise in the game. Master Shifu, a character suffering from inner turmoil and a lack of faith, is rounded out more as a wise-cracking Yoda. The Furious Five -- Tigress, Monkey, Mantis, Viper, and Crane -- are also less scornful of Po in the game, jumping straight to resigned (but not resentful) acceptance. The uncomfortable silences between all are politely removed for the sake of not having to explain the discord caused by Po being “accidentally” named the Dragon Warrior. Further, Po exudes more of a bumbling pride in his title as the Dragon Warrior, whereas his humble acceptance and doubtful head-hanging from the movie are downplayed, painting the picture of a Dragon Warrior that never really doubted his place in the cosmos. His much more frequent in-game renditions of the cocky Bruce Lee play to these skewed attributes as well.

None of this creates an unbelievable dissonance in the game’s world, but it misses the believe-in-yourself-even-when-no-one-else-does bullseye that the movie aimed for. And even though the way to Po’s heart is through his stomach, his impetus is never explored in-game, making his maturity as a martial artist a simple matter of assigning end-of-level skill points rather than finding any inner fire to enlighten his growth. By not rehashing settings, and by smartly editing the level lengths, Kung Fu Panda is going to whiz by with the pacing of its big screen counterpart, as opposed to turning it into an epic-length snooze.

The deftly-handled martial arts make up for any overly-nuanced character-building complaints, however. As Po advances from a lumbering bear to a masterful kung fu panda, his movements become crisper, sharper. His lumpy double-jump evolves into a forward-flipping spring; his wide-swing punches gain greater focus on their targets; his lazy-footed roundhouse kicks begin whipping around with greater velocity; and his initial barroom brawl tactics start to exhibit greater projection and chi, hitting through enemies rather than just hitting them. And, like in Assassin’s Creed, a taste of the late-game’s kung fu mastery is spoon fed to the player in the opening chapter -- cleverly tucked into a dream sequence paralleling the movie -- before stripping Po back down to a noodle shop waiter with a handful of kung-fu-grip action figures, when he wakes up.
So no, developer Luxoflux didn’t reinvent so much as renovate the battered and bruised movie-to-game tie-in. It plays its role as a supplementary account of Po’s travels by gingerly applying characters and locations without stepping on the movie’s sandaled toes, and even further expounds on Po’s legend without spoiling his quest’s believability while doing so. The journey is a short, beautifully-visualized one, but filled with flying fists of fun while it lasts.