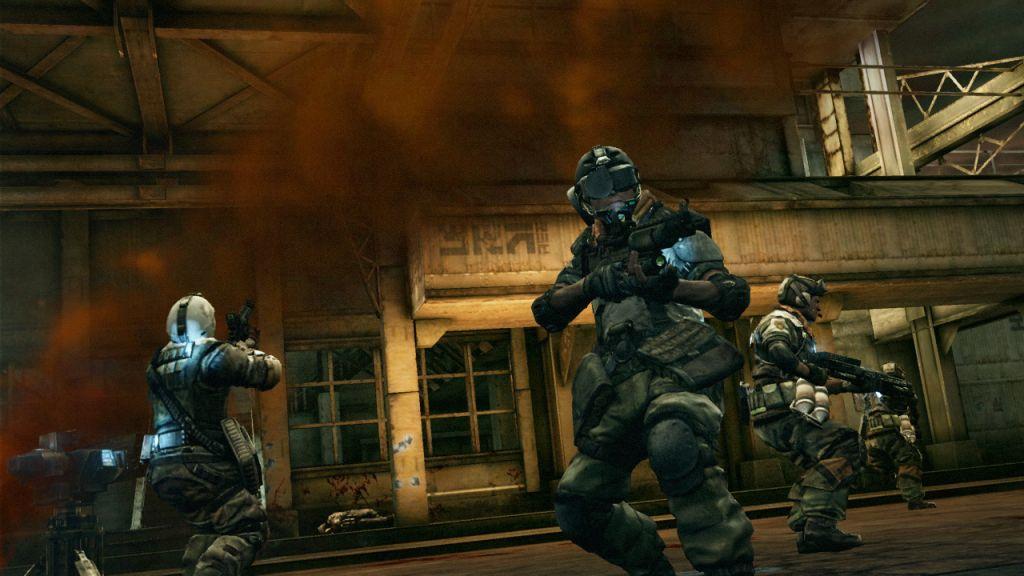 Written by Charles Husemann on 2/5/2009 for PS3
More On: Killzone 2
After completing Killzone 2 last Saturday afternoon I had two thoughts. The first was "Wow,the game was damn near perfect" The second was "I really wish I could have played it with John".  Killzone 2 raises the bar graphically for the industry or that the story was one of the best we've seen for a first person shooter in a while (OK, the bar's not that high) but the lack of co-op gameplay sticks out only because it's the one checkbox the game can't mark complete. I can't shake the feeling that the game would be just a smidge better if I could have played it with someone else. That's not a knock against the excellent AI in the game but rather just something I've come to expect from modern shooters.

Killzone 2 starts with the ISA invading Helghan to put an end to the war between the ISA and the Helghast. You play Sev who as a member of the ISA's elite Delta unit are tasked with capturing the Helghan commander Scolar Vissari. This is viewed as a way for the ISA to quickly turn the tide of the war. Unfortunately for the ISA the Helghan have more than a few cards up their sleeve.   What I liked about the story of the game was that while the framework of the story was action movie generic the writers at Guerrilla took some time to flesh out the characters of the game and added enough twists and turns to keep the game interesting. I really dug that the writers took a few chances and didn't feel the need to tack on meaningless side stories to the plot.

As I mentioned in my first impressions I do wish Guerrilla had provided some more history on the fight between the ISA and the Helghast as this is my first game in the Killzone universe. Something to let me know why the two sides were fighting and why the Helghast troops have to wear re-breathers and wear eye gear that makes them easy to spot would go a long to helping new comers to the franchise.

The game does a fantastic job of managing the pacing of the game as you move from firefight to firefight. You'll take part in large scale battles across strategic points of Helghan as well as close  room to room combat in some of the cities. The game also tosses in a few vehicle sections to break things up a bit. Unlike a lot of other games these feel organic to the plot of the game and don't feel t bolted on. I do wish there was an additional mission or two in the mech you get to pilot in the game though.

Of course all this banter about plot and pacing would be meaningless if the controls were crap but this is another area were Killzone 2 shines. They  take a little bit of getting used to and the game never really walks you through the cover system but once you get the hang of them they work very well. This is a shame as the cover system in Killzone 2 is top notch. To take cover you click the L2 button and Sev latches on to the nearest cover or crouches (sometimes both if it’s low cover). To shoot over cover you push the right thumbstick up and he aims around the cover. Moving left or right while in cover strafes you left and right and releasing the thumbstick immediately drops you into relative safety. The cover in the game is a bit more natural than that of say Gears of War 2 as the Helghast haven't placed short walls along every road and path and there don't appear to be any indigenous cover worms roaming the area. There are a lot of bombed out cars, destroyed walls, and various other things that you can use for cover though. 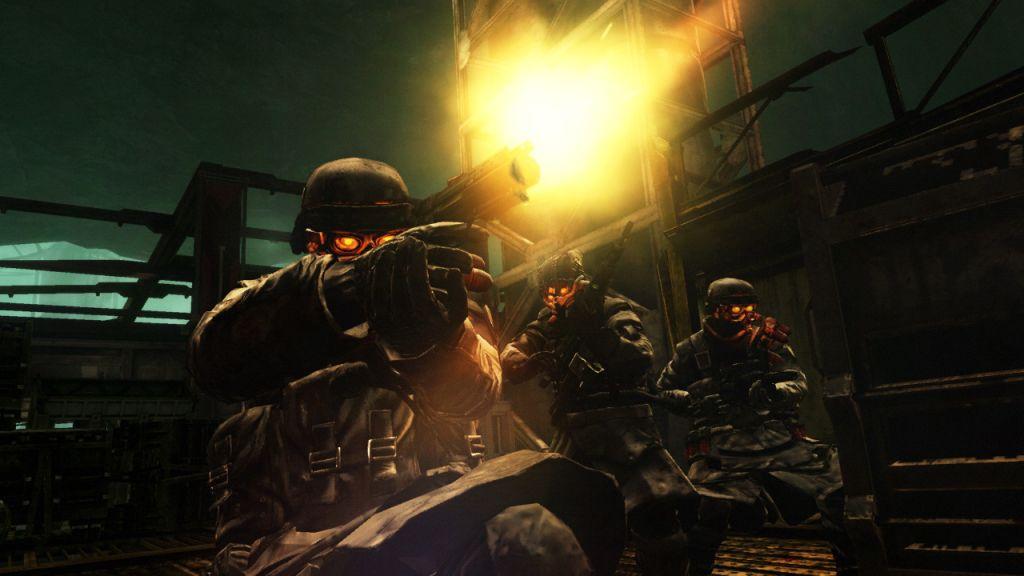 I'd also give a tip of the hat to Guerilla for coming up with some interesting ways of using the SIXAXIS motion control. It's used vary sparingly in the game as you only use it to open a few doors and to arm some explosives. It does add a little bit to the game but more importantly it doesn't take anything away by forcing you to use it a lot. They also added some SIXAXIS motion control to the loading screens which resemble those 3D lenticular movie posters.  Again it's a nice touch but not something that takes away from the game.  It also helps mask the loading times which are maybe a little longer than they should (this might be due to the fact that we were running a pre-release copy of the game and not a final build)Those looking for high tech weapons in the game will be disappointed in Killzone 2's armory as the weapons are decidedly old school. There are a few exceptions to this like the lightning gun and the bolt gun but the rest are you various varieties of shotguns, pistols, and shotguns. The weapons are also almost exclusively aimed with iron sights making them more old school than I would have expected. Honestly they wouldn't appear that far out of place in Call of Duty 4.

This does make the "special" weapons that much more important. The bolt gun is lot of fun as it fires an explosive bolt into an enemy, knocking them off their feet and stapling them to what ever is behind them. It's a bit like the stake gun from Painkiller but with an added explosive kick. There's nothing like hitting one guy and then having the explosion take out one or more of his friends. The flamethrower in the game is also worth talking about as it's easily the best flamethrower ever put into a game. Since the flamethrower is really ignited napalm it lets you arc fire over barriers to get at the troops behind them. The satisfaction of seeing them catch fire and run around is quite satisfying. There's a nice lightning gun but you only get to play with it for one of the levels in the game which is a shame for such a fun weapon. 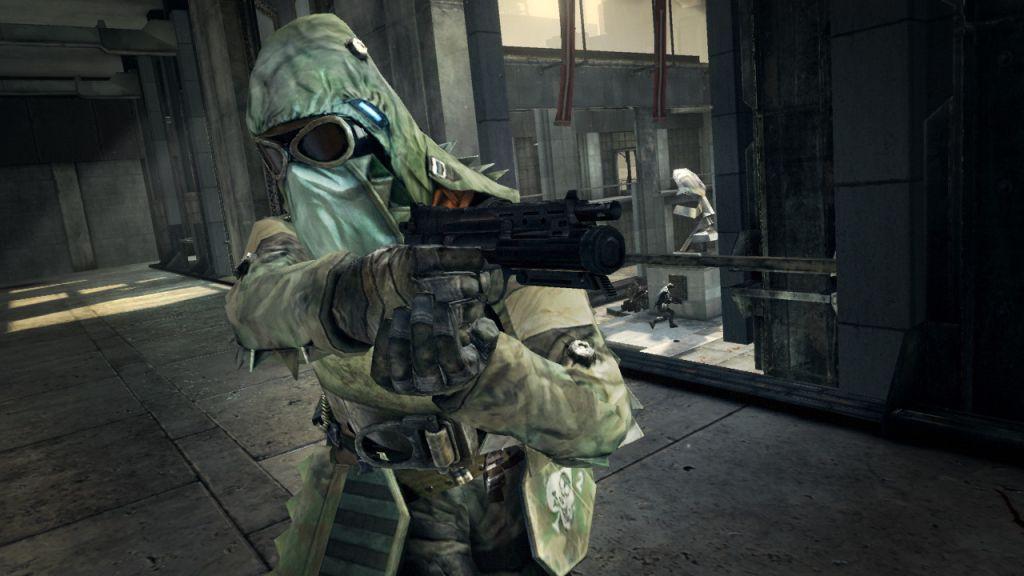 Of course you couldn't talk about Killzone 2 without talking about the graphics in the game. While the game doesn't quite reach the infamous target render that Sony promised in 2005 the game does come scarily close. Levels feel real as the level of detail and particle effects is stunning. Firefights kick up dirt and debris forcing you to deal with the most realistic fog of war that I've ever seen in a game. One of the things that I couldn't talk about in my first impressions was that some of the later levels break away from the standard gray/brown pallete of most shooters with some nice outdoor levels. There aren't any lush jungles on Helghan but there are some very nice deserts and the view from the orbiting ships and you drop down onto the planet are quite well done.

The audio matches the visual as there are distinct weapons for each gun. As I got towards the end of the game I could tell which type of Helghan troops I was fighting by the sound of their weapons. From the rapid fire vipping of the heavy machine gun to the whooshing sound of an incoming rocket help bring the battlefield to life. Some of the voice over work is spotty but Brian Cox delivers a solid performance as Scolar Vissari . Some of the dialog in the game is a bit on the generic side but it's not as bad as the forced machismo of Gears of War 2. The soundtrack of the game is also strong and provides the right tone to the game. I'm not saying we're at the John Williams soundtrack level but the music does add a bit to the game.

With the game not being released until the end of the month it is a bit difficult to judge how the game will do when the public has free reign with the game. For that reason I'm limiting the review to the single player portion of the game. That said if the game is as good as what I saw in the multiplayer beta then I think people will be happy with their purchase. 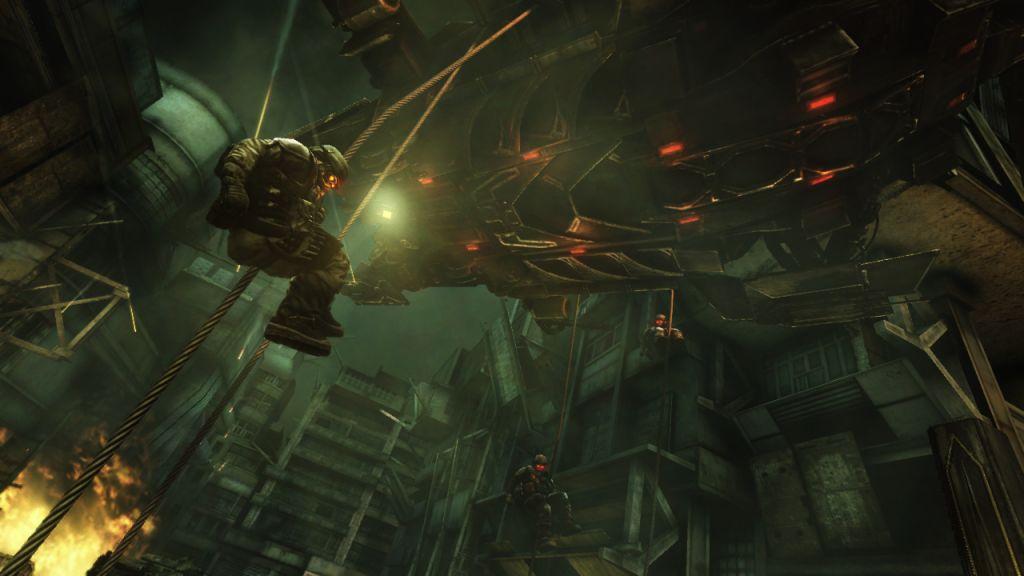 Killzone 2 is a solid FPS game and while it doesn't exactly break a lot of new ground it's one of the best shooters on the market. I had a lot of fun with the game and never once did I wonder when the game was going to end or feel like the game was dragging. As someone who loves FPS games I can't recommend the game highly enough and I think people are really going to dig the game when it hits shelves later this month. Co-op would have been nice to have but it's hard to hold it against the game that was this much fun.
The PS3 finally gets a new signature title with a game that will have wide spread appeal. Killzone 2 sets new standards for graphics while providing a solid story with interesting characters. Co-op would have been nice addition but it's still the most fun I've had with a FPS game in a long time.