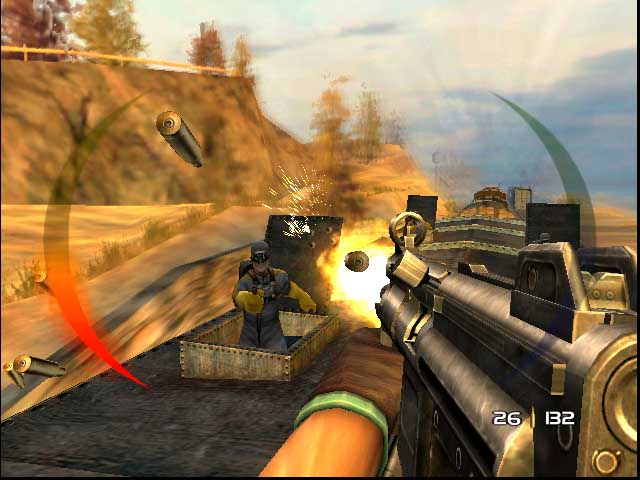 Written by Matt Mirkovich on 8/9/2005 for GC
More On: Killer 7
I said it before in my E3 report and I’ll say it again, I love Killer 7, I played it nonstop from start to finish and had the most enjoyable gaming experience I’ve had in a long time. I could go on and on about how much I think this game is everything a gamer needs to play and so on and so forth but then this would be quite the boring read and I’d look like one of those fanboys you see on the internet ranting about how Final Fantasy 7 is the messiah of gaming, and considering how I’m on the opposite end of the spectrum, I think I’m entitled to a little raving every now and again.

From the second you put the box in your hands you can tell that this game has something special in it. From the highly stylized graphics, to the downright bizarre story, there is plenty to wrap your hands around when you pick up the controller. There are a few dry moments I can attest to that, I mean I actually did get sick of picking up nothing but “Odd Engraving” items in order to progress but at least it’s a bit more straightforward than “Spade Key” or something like that. Suda 51 has pained himself over the past four years to bring you a gaming experience that borders on art. Even with all the gore, sex, and profanity running rampant in this game you can’t help but feel captivated by the absurdity of it all. Maybe I’ve just lost my mind in the summer drought of gaming, but this game provided me with something new and exciting. Even if it is just a really attractive on-rails shooter.

Straight up, the game is a graphical head-trip. You will never have seen anything before like Killer 7. The cel shaded graphics coupled with the interesting and disturbing character designs makes for a visual tour-de-smith. The locations that you will visit in Killer 7 run the gamut from being a Japanese restaurant to an elementary school, to Texas, yes Texas. The use of color in these locales will at times leave you breathless and at other times will make you wonder if you’re even playing a completed game. It’s a style that you definitely have to get used to but if you’re tired of the realistic look in today’s games then this may just be up your alley. To cleanse the pallet, or dirty it further you’re also going to be treated to a lot of anime, which struck me as a surprise as I was expecting the entire game to show the story with in-game graphics, so color me surprised.

Killer 7 doesn’t just stop with flashy graphics; it also contains a lot of interesting music. The two disc soundtrack was packed with many an interesting electronic tune. From the dance music that plays during your trip to the Coliseum to the funky little number that plays when you’re playing Russian Roulette with a school principal you’re pretty hard pressed to dislike the music. My personal favorite is the strumming of guitars for the track called “Tecks Mecks” that you’ll hear while running the streets of a town in Texas. Voice acting for the game is also spot on, and while it is vulgar you will find the dialogue well acted and interesting.
The name of the game in story is Terrorism, a new breed of terrorists named “Heaven Smile” and their leader Kun Lan are on a rampage that threatens a very unstable global peace. It is up to Harman Smith and the seven personalities that he possesses to stop this madman and the walking bombs that serve him. The Heaven Smile are no ordinary terrorists, each one is a suicide bomber, some have different abilities but their goal is always the same, to get up in your face and explode, which hits a little close to home in today’s unstable world that we live in. Each of the Smith personalities contains abilities that will leave you scratching your head. Kaede for example, will slit her wrist and rain blood in order to destroy barriers, Mask de Smith is a hulking luchador who can use wrestling moves to clear a path, for the times when his dual grenade launchers just can’t cut it. Every Smith will come in handy in your efforts to stop Kun Lan. Thankfully you can switch these personalities on the fly or else this game would be a great exercise in tedium.

Now for all the raving I had to do let’s get down to the critical area, the game play. Killer 7 is an on-rails shooter that provides you with a much more interesting control and navigation system as opposed to a game like Rez where your path is completely pre-determined. Killer 7 will have you running down halls and through corridors and all that other rough and tumble stuff, picking up items and solving puzzles and you are given the ability to turn around whenever you please. When you come to a critical junction you will be presented with the paths that you can take. A simple flick of the analog stick in your desired direction will take you to where you want to go. While this is a fairly serviceable system for movement, I found that the amount of time it takes to turn around to be a bit cumbersome, especially when running from large group of Heaven Smile who have no problem with running up to you in order to explode. The other slight gripe I had with this system is that the direction that analog stick must be moved can change as you get closer or further from an object, and sometimes this will cause the directions that you need to move the analog stick to become clumped together and can occasionally result in a fatal mistake.

Then there comes the fighting, or rather shooting. When you come upon an area where a Smile is located you will hear them laugh and give away their presence, and it is usually at this time that you’d want to switch into the first person mode. A tap of the L trigger will scan the area for Smiles in the area. It is only after you have performed this scan will the Smiles be visible to you, oh yes, I forgot, the Smile are almost completely invisible to the naked eye and cannot be hurt until you perform this scan and they must be within your field of vision. Once you’ve got a Smile in your sights, proceed to blast away or look for the glowing sweet spot for an instant death. Touchy controls and some stupid load times for some of the characters can throw the frustration level through the roof especially when dealing with multiple Smiles, and some of the later Smiles will take more than bullets to the body to go down, so don’t be surprised if you wind up getting blown to pieces a few times.Death is an interesting mechanic in this game, when your personality dies, another personality is called out to go and revive them. This person is fairly beefy and tough to take down, but if he bites the bullet then it really is game over. Once he collects the body bag of the dead personality you can resurrect them. Now when it comes to dealing with Heaven Smile there are sweet spots that can be seen on the limbs or heads or other designated areas of the body. You won’t see this sweet spot while playing in hard mode (a fair warning to those out there that enjoy a challenge) but when you do a well placed shot will take out a Smile in one hit. This is something you’ll want to do often as it gives you blood. There are two types of blood, thick and thin. Thick blood is used to buy hints or power ups for the personalities, and thin blood is stored and can be used to recover lost health.

Of course the game would be quite boring if you had to sit there and shoot Smiles all day, that is why there are some brilliant boss battles to help liven things up a bit at points in the stages. One of the boss battles will have you duke it out with another assassin in a gun duel, the person who scores the most hits is the winner, and the loser, well, peace out. Another interesting boss battle will pit you against an anime-inspired school girl who battles you in a dimly lit parking lot; this is one of those times where Mask de Smith comes in handy. Or there is the simply ridiculous battle that pits you against “The Handsome Men.” Who are they? Well you’ll have to play to find out, but it is very entertaining to say the least.

The game rounds out at about 15 hours which is more than enough time to put this game through its paces. There is an extra difficulty and a bonus personality to unlock so if you want to see who it if you’ll have to play through this game from start to finish. The first person shooting can be a put off at times, but it’s not something you’re doing at every waking moment of the game, which is something I greatly appreciate as I was expecting this to be like Resident Evil: Dead Aim where I was constantly in the first person mode waiting for zombies to come around whatever blind corner happened to exist before I kicked back and laid into them with lead. The art style which encompasses all the sights and sounds is what really makes this game unique and interesting to play. Just be sure that the kids never find out about this one until they’re older, as this one is definitely not for children. But for us mature gamers out there a game like this is akin to seeing a great rated R flick. Don’t miss Killer 7, with all the critical reviews putting it down as a waste of time, it would really be a shame if you miss out on this. Give it a month or two and you’ll probably either find this one in the bargain bin at your local game store, or on the list of discontinued and over-priced games on eBay.
An impressive title for the Gamecube that while a little on the odd side is a blast to play