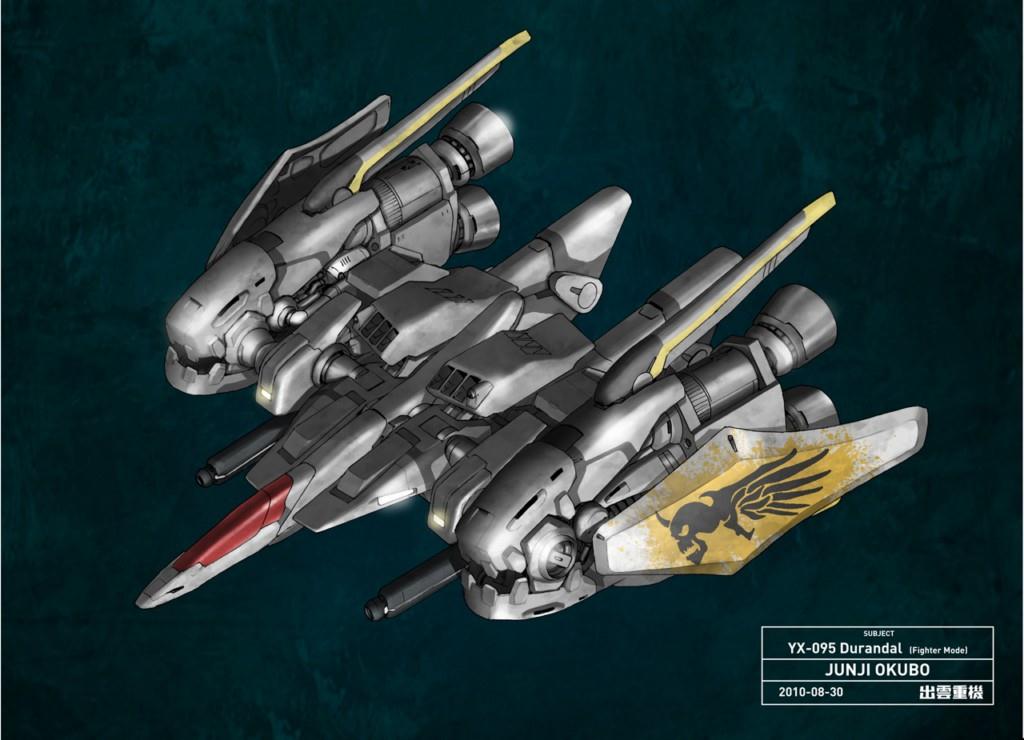 Written by Travis Huinker on 11/9/2012 for PC
More On: Indie Spotlight Strike Suit Zero
Indie Spotlight is a weekly article series at Gaming Nexus that explore the origin and development of unique and innovative games designed and produced by independent developers. Each article includes a developer interview that focuses on examining the concept and design processes involved with each project. Indie Spotlight strives to showcase new and upcoming games that range from a variety of genres and development studios across the world.

With only two weeks into the start of their Kickstarter campaign for Strike Suit Zero, the developers at Born Ready Games were able to reach the target of $100,000. With the game being described as offering "fast and frantic space-combat, putting you in the middle of massive fleet battles where the fate of Earth relies on your dogfighting skills," Strike Suit Zero has become one of the more exciting independent projects to be announced with its truly stunning gameplay and presentation quality. The primary gameplay element involves the Strike Suit craft's ability to transform between a standard space fighter into a mech-type suit, which is all accomplished through the simple click of a button.

The game's bold statement of "space combat reborn" is exciting by itself when considering the genre has unfortunately received little to no amount of attention from developers and publishers. Jamin Smith, Community Manager at Born Ready Games, was gracious enough to sit down and answer questions regarding not only the gameplay of Strike Suit Zero, but also topics ranging from its development to soundtrack.

Could you introduce yourself and talk about your various roles with the development of Strike Suit Zero?
I’m Jamin Smith, the Community Manager at Born Ready Games.

Regarding the acquirement of Strike Suit Zero from Doublesix Games, how was the transition from one studio to another for the team?
The physical transition from one studio to another was interesting; it’s very easy to get attached to your desk and settled into a certain work ethic. However, as the team remains largely the same as the original doublesix team that took on the project initially, the new studio has only really been a change of scenery. The same expertise and passion that brought the game to fruition will also be seeing it through to completion. Now we’re fully independent, there’s been an injection of vigour to the team; this is technically our first game and we want to bring the space combat genre back in style.

In the development diary, it was mentioned that the Strike Suit would not be used in every mission. Can you shed any light on what type of mechs we will see in those missions?
So the game has four craft: the Interceptor – a lightweight craft mainly used for scouting purposes; the Fighter – an all round dogfighter; the Bomber, which is pretty self explanatory; and the Strike Suit itself – the transforming craft at the heart of the game. During your first playthrough we dictate which craft to use, on a second attempt you can use any of the four craft (providing you’ve unlocked them). This means you can try a level in a different way, or make things difficult for yourself by using the Interceptor on one of the latter, dogfight heavy missions.


It was mentioned at Rezzed that players will be able to fully customize the loadout for each mech. Will players be able to customize the look of their mechs, such as through custom emblems and the like?
The player will indeed be able to customise their weapon loadouts. The Strike Suit has four weapon slots; two for guns, two for missiles. We currently don’t have any customisation options for the look of the mech, however. You can also unlock upgrades for weapons and ships via outstanding mission performance.

Visually speaking the game looks stunning. What was some of the inspiration behind the design of the mechs?
The Strike Suit itself was designed by Junji Okubo, a renowned Japanese mecha designer and the brains behind the mechs and ships found in Steel Battalion, Infinite Space and Appleseed, amongst others. Junji has a very functional approach to his designs; the Strike Suit transforms as if it were an actual piece of machinery, with every part of the craft moving in a way that would make sense in the real world. You can hear from Junji himself in our second developer diary. We wanted a real east meets west feel.

What was involved in the process of tweaking the handle and controls of the mechs in-game?
The most important thing was making the craft compatible with as many control methods as possible; we wanted to open up space combat to new audiences, and therefore wanted the game as accessible as possible with all control inputs. We’ve worked hard to ensure both mouse and keyboard, and game pad are as intuitive as possible, whilst also testing the game with a range of joysticks. One of the most important ‘tweaks’ was to ensure that the sensitivity is well balanced, and that everything remains consistent between craft and modes. 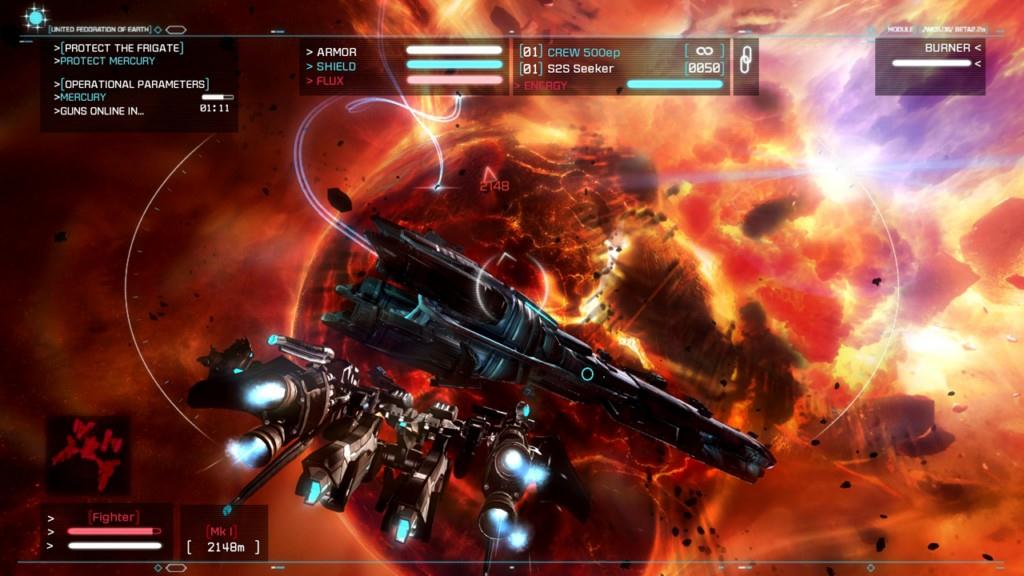 So far we have seen footage from the single player campaign. Can we expect to see some kind of multiplayer mode, or even a co-operative campaign?
We’re fully focused on delivering the best single player experience possible right now. That said, multiplayer is something we’d love to do – it’s simply a case of time and money.

Can you tell us about some of the game's environments in which players will be navigating their mechs? How have you approached designing the environment of space in regards to the mechs' movements?
The game takes place across 13 missions, and a variety of environments. While space is a dark and featureless expanse of (mostly) nothingness in reality, our artists have done a fantastic job of bringing colour and vibrancy to the Strike Suit universe. You’ll fly through the wreckages of destroyed UNE bases, asteroid fields, and fly about the vicinity of otherworldly planets with sweeping views of the cosmos.

For you, what are the key components of a great mech game? How are they being implemented into Strike Suit Zero?
We’re always keen to stress that Strike Suit Zero isn’t a “mech” game; we’re very much in the space combat vein of things, but obviously centred on a craft that has the ability to transform into a mech. So we’re not Armoured Core or Mech Warrior - we’re definitely harking back to the Wing Commander, Freespace and X-Wing vs Tie Fighter days of the nineties.

That said, there are of course some similarities to Zone of the Enders. Perhaps the most important component of a good mech experience is a suit that really empowers the player. We’ve ensured that the peak of the gameplay is found when you’re in Strike mode; with the ability to dash, lock onto multiple enemies and take advantage of an array of powerful weaponry; we think we’ve really nailed this. 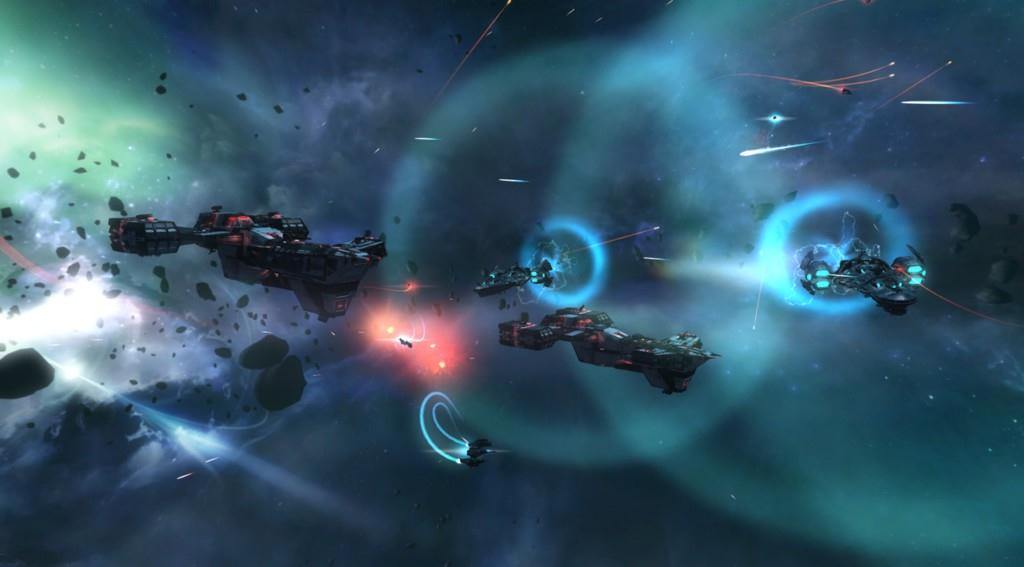 When it comes to the music that I have heard in the trailers, it is very reminiscent of Zone of the Enders. Was there any inspiration drawn from other great mech games music wise?
The soundtrack has been composed by Paul Ruskay, who fans of space games will recognise as the award-winning composer of Homeworld. The soundtrack has hints of Homeworld, as well as similarities to Bear McCreary’s Battlestar Galactica soundtrack. For the game’s main theme, Paul has collaborated with Japanese singer-song writer Kokia (Tales of Innocence, Gunslinger Girl: Il Teatrino). This gives the game a really interesting fusion of sounds – there’s a real notion of east meets west, which is a theme that translates into all areas of the game’s design.

When can eager gamers expect to get their hands on Strike Suit Zero and what platforms are planned for its launch? Are there future plans for additional downloadable content?
We currently have no firm date locked down, but should have a date to share with you very shortly.

Is there anything we missed that you would like to mention about Strike Suit Zero?
For those interested in the art of the game, we’re giving away a free 24-page artbook with all of Junji’s mecha designs, environments and general information on the universe of the game. We’ll send out a copy to anybody that enlists on Facebook. 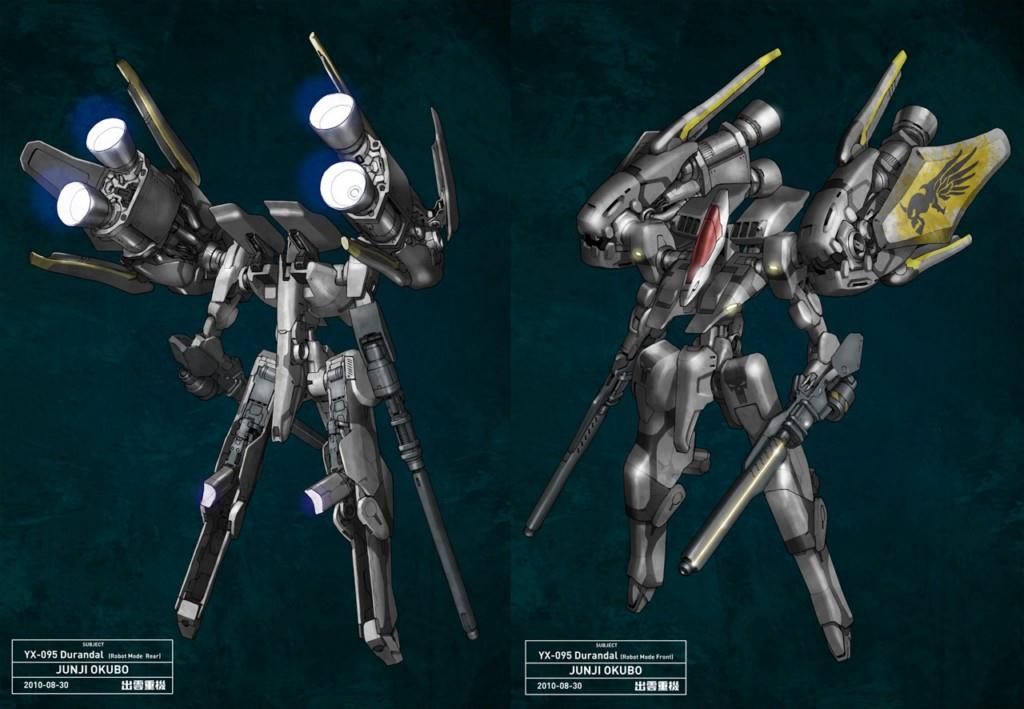 With a team of devoted developers and thrilling gameplay concept, Strike Suit Zero should be closely followed by fans of the much-ignored space combat genre. The visuals speak for themselves in that they could easily be compared to any recent major game release. The most exciting element of the game is the nostalgia overload of 90s television shows ranging from Robotech to Mobile Suit Gundam. Strike Suit Zero deserves the attention of every gamer that has been eagerly awaiting the rebirth of space combat.

Visit the Strike Suit Zero Kickstarter page for further information on the gameplay and various features, in addition to the ability to offer a pledge toward its development.

We'd like to thank Jamin for taking the time to answer our questions.