Written by Jeremy Duff on 8/23/2013 for PC
More On: Indie Spotlight Arena.Xlsm
Indie Spotlight is a series at Gaming Nexus that explores the origin and development of unique and innovative games designed and produced by independent developers. Each article includes a developer interview that focuses on examining the concept and design processes involved with each project. Indie Spotlight strives to showcase new and upcoming games that range from a variety of genres and development studios across the world.

Let’s be honest, life in an office can get pretty monotonous. Reports, spreadsheets, memos, and a million other documents consume your life day in and day out, the experience gets old very quickly. I have worked in an office environment for the past decade, and I can personally attest to the repetitiveness that arrises over the course of a work-week. Just about everyone who has experienced this has tried to find some way to help pass the time, be it Solitaire or Minesweeper, but there is a good chance that those types of programs will get spotted a mile away from one of your bosses. If only there was some sort of game that would blend in well with the likes of my various office or productivity suites. Well, there is: say hello to Arena.Xlsm! 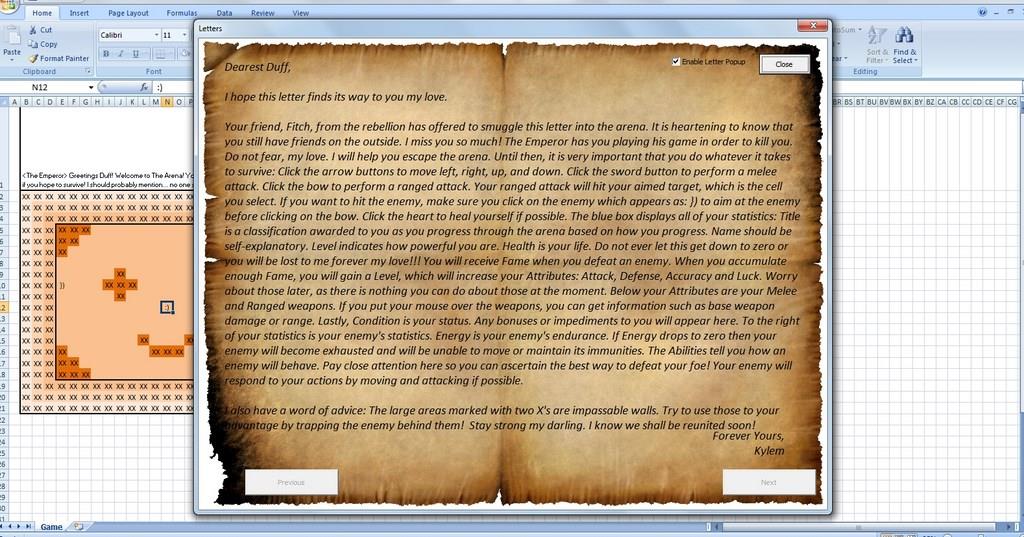 Arena.Xlsm is a unique, rogue-like RPG-adventure created by accountant Cary Walkin and developed (and running) entirely within the confines of Microsoft Excel. It’s basically a game that you can play and it looks like your working. It sounds unbelievable, I know, but I have spent a couple of hours trekking through the textualized-dungeons of the game and can attest it works, and it works really, really, well. You can check out the “game” yourself for free at Cary’s personal website.

Let me point out some of the finer points if this ingenious creation: It is pretty cool to see in action and something that I definitely recommend checking out, even if just to experience it. Recently, I had a chance to speak with Cary to find out just what went into and drove him to crafting a spreadsheet based adventure. 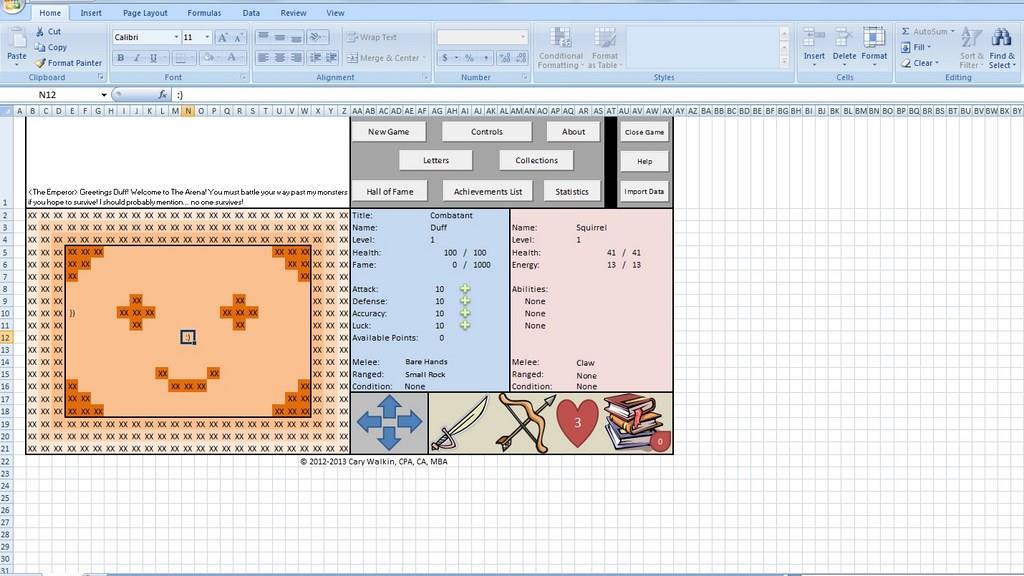 Introduce yourself and tell our readers a little bit about your personal gaming background? Any development experience?
My name is Cary Walkin, I'm a chartered accountant from Toronto, Canada. I completed Arena.Xlsm while I was pursuing an MBA. Prior to making the game, I had no development experience however I always had a passion for video games and making a game was always something that I wanted to do.


Just to give us a little bit of reference for you as a gamer: what are your top 3 all time favorite games (in no particular order)?
EVE Online, The Walking Dead, Portal 2


How did you get the idea to create a game within Microsoft Excel? Where did you draw your inspiration from?
The game actually started as a learning tool for myself. I was taking a course as part of my MBA called "Advanced Spreadsheet Modelling" which was about using Microsoft Excel tools to create solutions for the business environment (such as financial reporting, option pricing valuations, optimizations). After class, I would experiment with those tools and realized that I could make a game with them. The idea to create a game in Excel came from the realization that I actually could make a game Excel... I'm not sure if that makes sense but that's the closest I can come to recreating the thoughts that were in my head at the time. 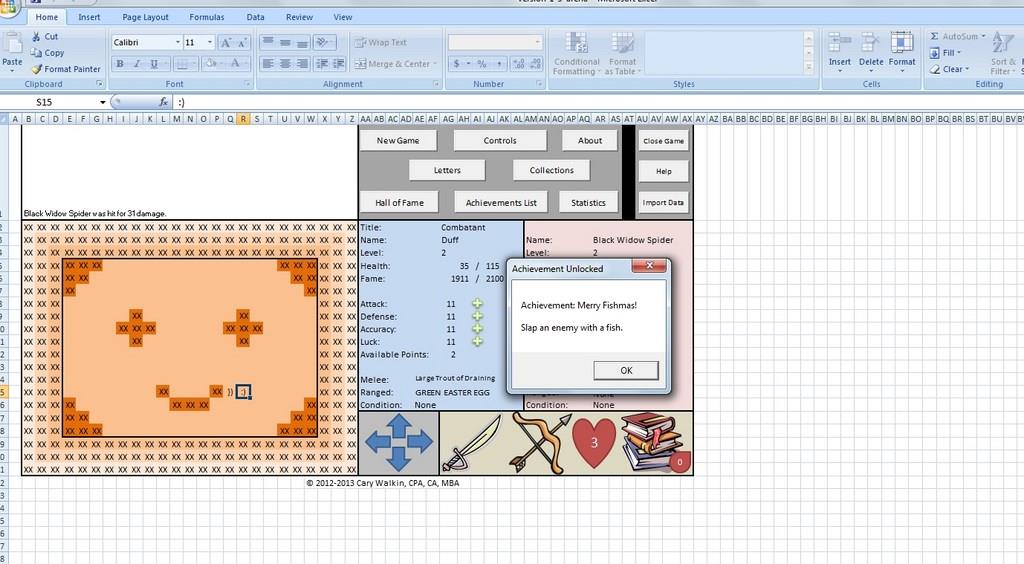 How long was it between the genesis of the idea and when you had something functioning like a real game?
The decision to actually move forward and devote my spare time towards making Arena.Xlsm was in October 2012. 2 months later in December 2012, I had a working alpha version of the game that I could actually show people. Another 2 months later in February 2013, the game was done and I took 1 month to focus on the story of the game prior to the game's release in late March 2013.


Most people don’t even realize that there is a whole “genre” (if you will) of Excel games out thereon the Internet. How did you discover this niche market and did you reference any established ones for inspiration in Arena.Xlsm?
I also was unaware of other excel games on the internet. I did some research early on in the development process to make sure that the game that I wanted to make hadn't already been made yet. I noticed some of the more complicated ones used features that were exclusive to Excel 2010+ such as conditional formatting. I wanted my game to be accessible to as many people as possible so I decided early-on to only use functionality that would be available on Excel 2007+. 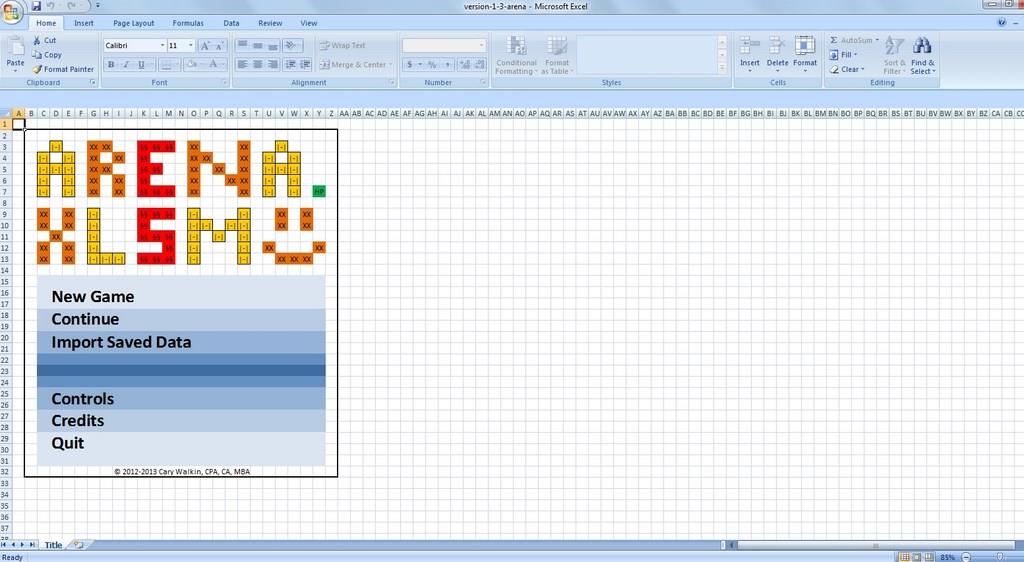 How has the Arena.Xlsm project changed during its development? How close is the project you are distributing to your initial vision?
Arena.Xlsm changed drastically during development. This was largely a result of not having strict deadlines. This allowed me the freedom to increase the scope of the game whenever an idea popped into my head. I understand that for commercial products that this is a terrible way to do game development (see Duke Nukem Forever). However for Arena.Xlsm, the only goal that I had set for the game was that I wanted to be proud of it.


Were there any ideas that you had to cut, or perhaps really wanted to implement but have yet to find a means of doing so?
I had to cut content to ensure the game would actually be finished and be released prior to my completing the MBA in April 2013, which I had set as an informal internal deadline. Things that did not appear in the final game included 3 more boss encounters and more unique items. I was able to get a lot of content and features into the game in post-launch versions using the Import Data feature which was able to act as a patching tool within Excel. This allowed me to add: Keyboard controls, collections, statistics, 6 new arenas, new game mechanics, more enemies, more achievements, etc. The full version history is available on the official wiki: http://arenaxlsm.wikia.com/wiki/Version_History


Being someone who uses Excel extensively in my personal career (outside of gaming), I have spent a lot more time with the software than the average user; I have always been amazed at the amount of flexibility and basic “power” of the program, would you agree that most people don’t realize everything that can be done with it?
As a professional accountant, I'm likely in the same situation as you are. I use Excel every single day as part of my career. I would agree that most people don't realize everything that can be done with it. To educate people on the possibilities and to encourage creative-minded people to start their own projects, I've started an online tutorial series called VBA4Play. These are free tutorials written for people who may have never touched VBA to be able to make their own games in Excel.


Would you ever consider expanding on this design? Perhaps turning this into a full-fledged (graphical) adventure?
I would love to turn Arena.Xlsm into a full-fledged graphical adventure. To this end, I've started learning to develop in the Unity game engine. However I'm also very aware that I lack certain skills in art and programming and would be looking for a team of talented people to help bring this project to completion. To follow my progress feel free to follow me on Twitter @CaryWalkin, Facebook, Reddit or my website www.carywalkin.ca.


Gaming Nexus would like to send a personal thanks to Cary for taking the time to talk with us regarding his project. You can find out more about the game at Cary’s website.