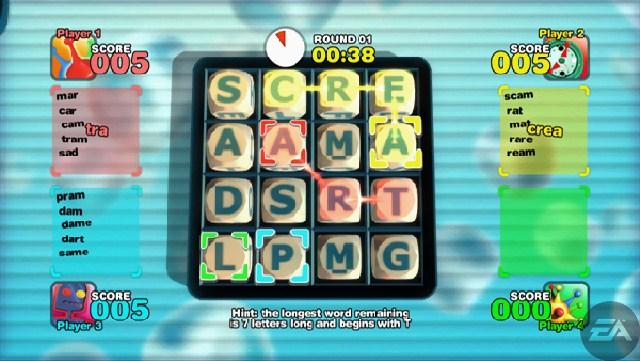 Written by Ben Berry on 2/22/2010 for Wii
More On: Hasbro Family Game Night
But instead of going on and on about the great fun most Hasbro games are, this review will probably read like an “airing of grievances” from Seinfeld, because I have a lot of issues with this game. This is one of those games that you think should be good, but trust me, it isn’t.

The biggest problem is the game selection. They took mostly games that use physical actions to play, beyond the rolling of dice or moving of pieces around a board. The problem is that these games just don’t cross over into the digital realm very well.

Let’s start with the one decent game, Connect 4x4. If you‘ve wondering what Connect 4x4 is, it‘s a new version of Connect 4 with a double board so 4 people can play. It‘s a terrible attempt to update a classic, and it plays that way digitally as well. Thankfully, they also included the original version of the game as well. This is the one piece that really stands up ok. While there isn’t anything as nice as the physical game, it does still feel pretty close to playing the real game. There are some foibles with the control scheme, but it’s in general pretty decent. My wife and I both had problems with the controls at first because it was so touchy about which row you were dropping the chip in. But eventually we were able to enjoy this game. 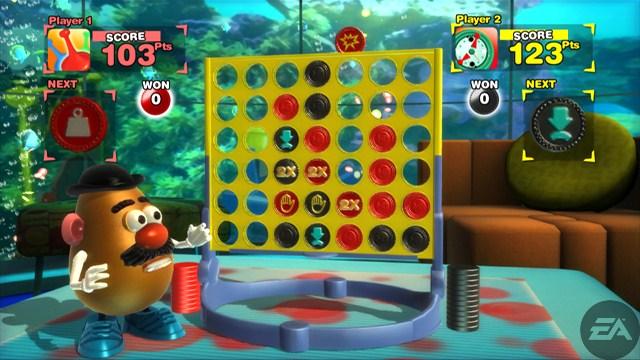 Unfortunately, it’s pretty much all downhill from there.

I figured out whats wrong with Jenga as it appears in Family Game Night 2. I think there’s just less tension because the bricks aren‘t real. That inevitable collapse of the tower doesn’t seem to mean as much. Maybe it’s just because you know you don’t have to pick the game up and reset the tower if you’re the one who knocks it over (house rule). Maybe it’s because they designers created an alternate take on Jenga where instead of removing pieces, you have to keep them in, as they move slowly from their positions within the tower. It’s really weird, because it’s the literal opposite of what you’re used to. On top of that, it’s not like it’s more exciting.

While there’s a lot wrong with Jenga, Operation is even worse. We‘re talking about a classic table top game that children and adults have been enjoying since 1965, and is still selling strong today. You’d think Operation would be an ideal port to the Wiimote based control scheme. Sadly, the game is far too picky about how you grab the pieces inside the poor patient. No matter how dexterous you are, it’s darn near impossible to get the parts out of “Cavity Sam”.

Some additional waggle games were added to match some of the functionality that appeared in a spin off version of the game Operation: Rescue Kit that have really nothing at all to do with the original Operation and just show how much this title is reaching for content. Waggling to get the heart rate steady or pump oxygen is one thing, but the worst part is when you’re “shooting” germs inside the body. It’s nothing at all really related to the original game or even the spin off. I can’t even get behind this with the idea of kids in mind, because they should be playing the original. 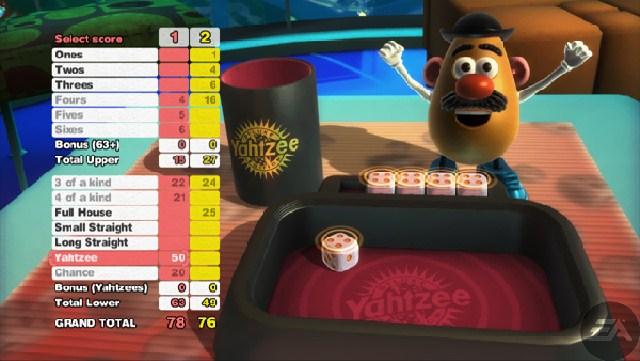 My wife is a HUGE Bop It! Fan. As I mentioned above, we play this as a family at parties, and Rachelle is always excited and usually does pretty well. Because she’s such a big fan of the real game, she played a lot more of Bop It as part of Family Game Night 2 than I did. To be honest, she was really disappointed. The Wiimote tries to approximate the Bop it! toy, and really it’s not a bad idea. Unfortunately, the implementation of that idea just isn’t right. The delay between the remote and the game is just too much of a gap. You make a motion, and the game doesn’t register the motion in time for you to stay in the games rhythm. It’s just too slow to react, even with fresh batteries, a player who is very good with the real game, and has a lot of Wii experience. I will say the motion controls mapped very well to the real game. Maybe this is a case where the Wii Motion Plus would have come in handy as a required component of the game.

Pictureka is a really ugly version of the memory game concentration. The pictures look like something right out of Ren and Stimpy, except not funny and not drawn that well. The game does everything you’d expect it to, and even has some nice alternate mini games, but the drawings are so ugly/weird that it makes the game unappealing and close to unplayable for anything other than very short bursts.

The factor that for me raised the grade a little bit is that there is a game show mode that attempts to pull together all of these games that seemingly have little in common other than they’re all made by Hasbro. The family game show mode creates a competition out of the various mini games. It’s made to look like a race, where there are 4 zones that the players compete to win. Winning a zone gives you pieces to build the “Golden Potato” (Mr. Potato Head is the mostly mute host of the game show). Whoever has the most pieces wins. The family game show mode really does make the less than stellar games at least playable because of the drama from competition.

In closing, Hasbro has a history of strong IP in the gaming space. Unfortunately, with Family Game Night 2, the wind up breaking the (George) Lucas Law; that is they screwed up their own IP by trying to do too much with it.

Comprised of several well loved classic games, including the historic Operation, Hasbro Family Game Night 2 should be a lot better than it is. Other than Connect 4x4, which holds up relatively well, the board games just don’t convert well to the Wii.