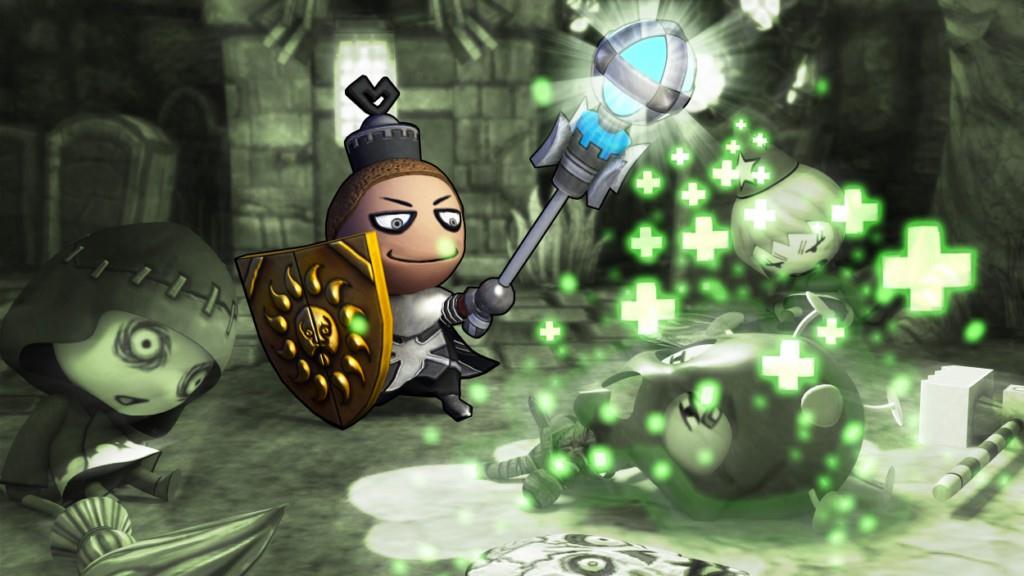 Written by Cyril Lachel on 10/12/2012 for 360
More On: Happy Wars
In the world of the Xbox 360, free games are rare. While the competition courts their fans with access to big games from both first and third party publishers, Microsoft has taken a different approach. In the past they've dabbled in game shows (1 vs. 100) and card games (Texas Hold'em), but these days most of the free Xbox Live Arcade releases seem to be ill-conceived advertisements for Doritos or Yaris.

Happy Wars marks a new leaf for the Xbox Live Gold service. While it's not the same as getting Infamous 2 or Borderlands, this free-to-play online multiplayer game is certainly a step in the right direction. What it lacks in originality and depth it more than makes up for with an endearing style and fast-paced action. It's the kind of game that may not hold your attention for long, but you won't regret keeping it on your hard drive.

There's a ridiculous story involving two sides who constantly get into asinine arguments. These fights inevitably spiral into an all-out war, where both sides draw swords, conjure magic and do everything in their power to take over the other team's base. Thankfully nobody gets hurt in these wars, leaving them to fight again over yet another pointless topic. It's a lot like real war... only without all of the depressing deaths.

Players get to choose between three classes - a warrior, cleric and mage. As you can imagine, each of these occupations have their own abilities and attributes. The warrior, for example, is best for brute strength tactics. The moves mostly revolve around close-quarters fighting. On the other hand, there's the mage, who uses magic to throw spells and summon hurricanes. This class is good at long-range combat, but is vulnerable up close.  Somewhere in between is the cleric, who can be used to erect ladders and other useful objects.

Every match plays out in largely the same way. Everybody starts out at level one, but with a few kills, your character will quickly gain levels and start to unlock new abilities and a larger health bar. The idea is to capture several checkpoints across the map, that way players will respawn closer to the opposing base. From there you're only one battle away from storming the enemy castle and becoming the victors. If you aren't successful at capturing the other team's base, then a winner will be decided at the end of fifteen minutes.

Regardless of whether they win or lose, players will accumulate points for each battle they fought in. Leveling up allows the character to wield more powerful weapons and wear better armor.  To keep things fair, players start each war at level one. This means that everybody has to kill and capture checkpoints in order to unlock abilities, allowing for a somewhat balanced fight. But don't fret, because players can bring in their high-leveled gear to give them an advantage. 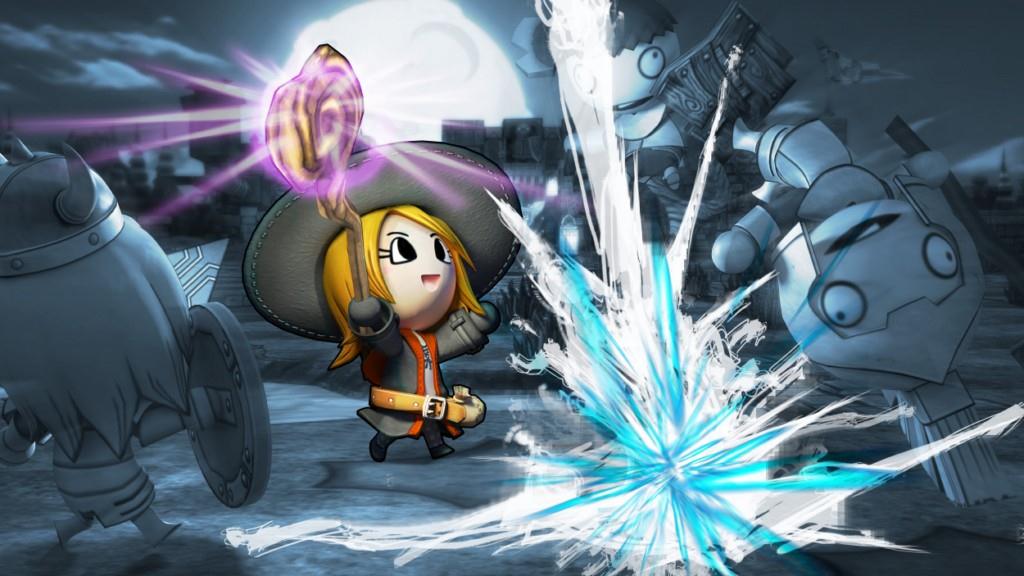 Sadly, the combat is only slightly deeper than your typical button-mashing brawler. Each character has his or her standard attack, along with a whole host of skill moves. These powerful moves can be mapped to the "A" and "B" buttons, allowing for players to quickly transition into a spin attack or freeze somebody in their tracks.  As more abilities are unlocked, players will be able to cycle through at a moment's notice. Though, the act of selecting what skill moves you want takes a little getting used to.

When in a crowd of your comrades, players can elect to try out one of the team skill moves. This powerful ability has everybody working together towards a common goal, such as breaking open that gate door. This is the most visually pleasing part of Happy Wars, as an entire team can get together and summon a giant tornado and rain fireballs down from the sky. These moves come with some risk, as it takes the kind of coordination that many teams lack.

The levels are all diverse, offering everything from a desert level to a holiday-themed snow stage. I was impressed by how unique each stage is, offering completely different obstacles to overcome. The sunset stage has giant cannons that shoot players clear cross the stage, while the rainbow stage has a boat ferrying players from one place to the next. The checkpoints are found up a series of windy stairs in the desert stage, whereas the snowman land places the checkpoints in obvious spots. 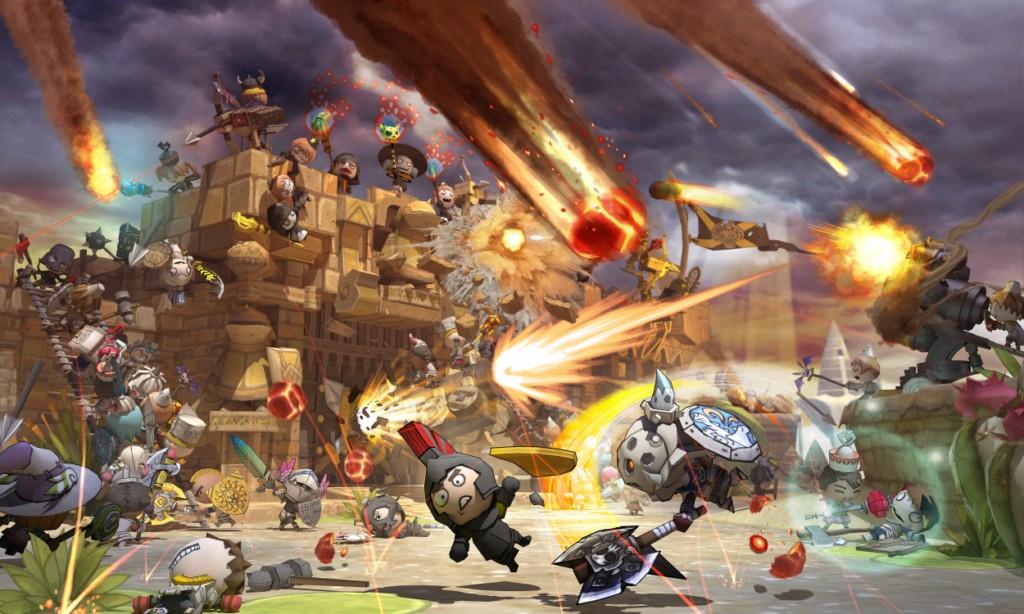 Thankfully the stages are large enough to accommodate thirty players at the same time. Each level is full of shortcuts and paths off the beaten track.  There are always a few ways to tackle every skirmish, which will keep this game fresh for at least a few weeks. Players not looking to go sword-to-sword can sit back and use one of the turrets to snipe characters across the level. On the offensive side, there are multiple ways of entering the enemy's base. The good level designs make it hard to plan for every attack, leading to some really exciting matches.

The characters look like rejects from an old South Park game. The levels, while expertly designed, don't look much better. With the armor and helmet on, most characters start to look the same, especially when there are thirty different players on the server at the same time. Still, the graphics are cute and colorful. I can certainly think of worse looking free Xbox Live Arcade games.

Like most free-to-play games, Happy Wars has a dark underbelly full of micro-transactions. Here you'll buy Happy Tickets for real world money (ranging from $1 all the way up to $20). These tickets will allow players to buy different skin options, more powerful weapons, fancier armor and all kinds of other perks. Thankfully you can still have a good time without spending real world money, as the various levels are ripe with free loot. Still, I worry that in the long run this microtransaction-based store will give some people an unfair advantage and skew the balance. 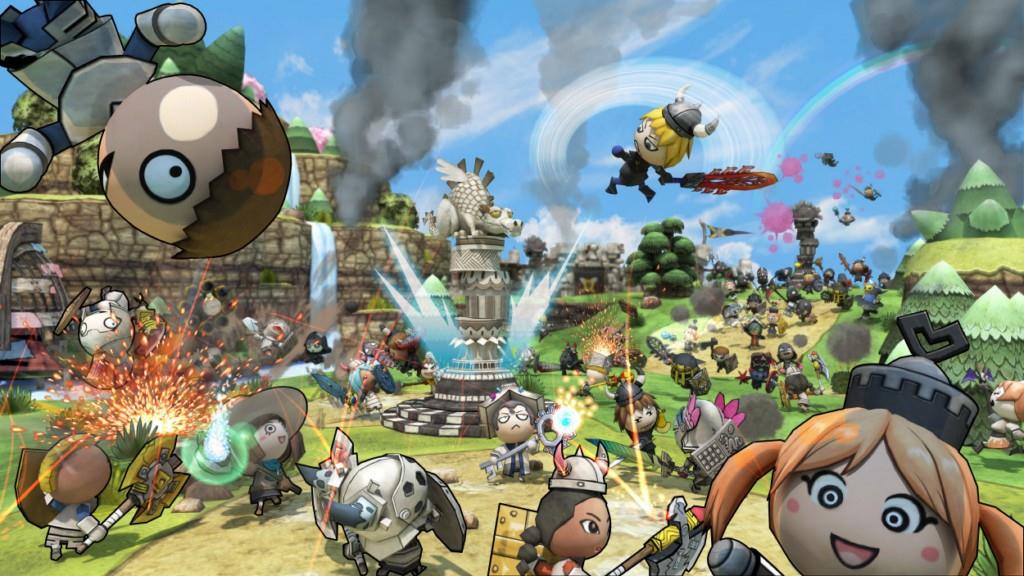 An even bigger problem is whether players will actually care to fight the same pointless wars for very long. After spending a number of hours fighting for supremacy, I started to get sick of the game's sameness. It's competitive enough to be addictive, but not deep enough to keep your attention for very long. It's the kind of thing I might return to every month or two, when there's absolutely nothing else to play.

Of course, there's an argument to be made that it's pointless to review a free game at all. It is, after all, a game you don't have to pay for. Even if you hate it, there's nothing stopping you from playing it for yourself. At best you'll discover an enjoyable multiplayer experience you'll want to come back to, while the worst thing that could happen is you accidentally snatch up a few of those easy achievements. If I can expect more free games like Happy Wars from my Xbox Live Gold subscription, then you can count me in.
Happy Wars is a simple multiplayer action game for the Xbox Live Arcade. While it is ripe with problems, it's also a free game that is worth checking out. You won't find anything original here, but the fast-paced action is both chaotic and addictive. Sadly, the game isn't deep enough to keep my interest for very long. Download Happy Wars and see for yourself!