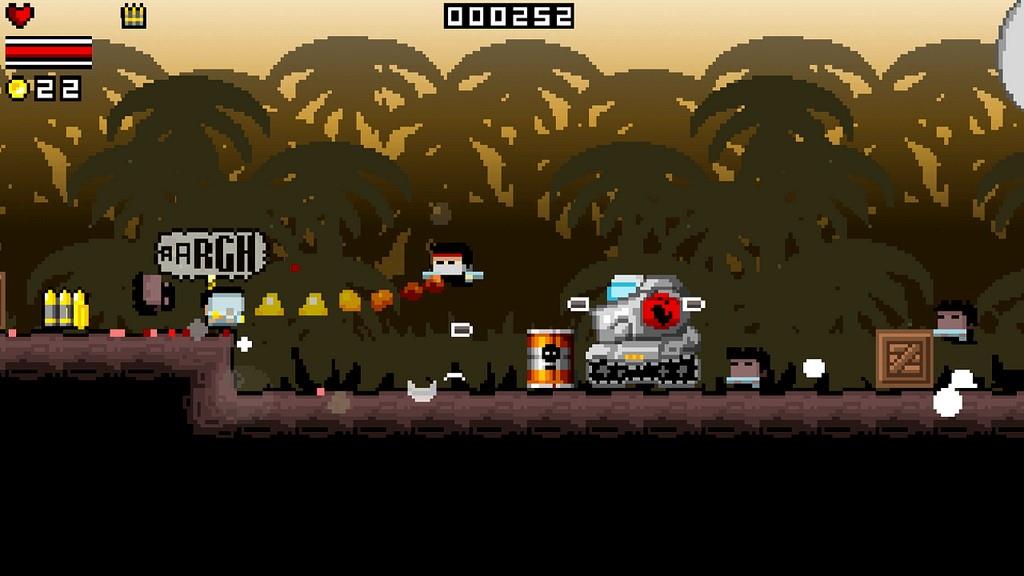 A quarter century ago, gamers around the world were memorizing a special code to earn more lives in Contra. For many, it was the only way to get through the notoriously difficult side-scrolling shooter. It wasn't a cheat, it was a necessity. Gunslugs goes the opposite direction. Instead of amassing dozens of lives, this new PS Vita action game strips the player down to a single life. Thankfully, it's not as hopeless as it sounds.

Gunslugs is an action-packed mix of Metal Slug and Spelunky, seeing the player fight through randomly generated stages with only one life to live. It plays out like most 2D shooters, where you run from left to right killing all the enemy soldiers that get in the way. However, the goal in each stage is to not only kill the bad guys, but also destroy their beacons. Once the mission is complete, our hero flies off to the next stage.

The story begins in the plane yard, where the Black Duck Army has been sending out strange signals. Eventually our hero discovers ground forces moving heavy machinery through the jungle. And if you think that's bad, Egypt is suffering from giant sand worms and the Siberian army base is incredibly cold. One of those sounds worse than the other, but I guarantee that they're both dangerous.

Like a lot of old school shooters, you'll play a couple of regular levels and then go face-to-face with a menacing boss. These large baddies are often intimidating at first, but a pushover the moment you've memorized their pattern. You may die a few times learning the strategy, but it won't take long before you can fly through them with little to no trouble.

Gunslugs includes seven different characters, though only Johnny Rumble and Gun Chick are available from the start. Characters like Willis Kiyay, Sly Rocko and Bad Ass Barracuda act as level checkpoints, allowing players to jump straight to Siberia or Egypt. This is a good way to learn the perils of each stage and master the boss fights, but it is disappointing that the character differences are only cosmetic.

As players fight through the various stages, they'll earn coins that can be spent on character upgrades, continues and even mini-games. Each level will have different buildings that can be entered, sometimes containing items and other times housing people with bonuses. Here you can find strange mini-games that emulate classic 8-bit games like Donkey Kong and Super Mario Land. These are a fun diversion and will refill your health and ammo in a pinch.

One of the more interesting elements involves optional objectives, which carry over from one play session to the next. These objectives include running over a certain amount of enemy soldiers with a tank, killing a bunch of bad guys with explosives, completing a bunch of levels in a row and other similar tasks. Complete one and it will disappear from the board, replaced by another mission to undertake.

I love the idea of completing simple tasks in each playthrough, but found some of them to be too vague. One of the early objectives is to play as Scarlette Sonya, yet I never figured out how to unlock her. This meant that the objective remained on my list for dozens of play sessions, effectively reducing the amount of active missions down to two. This problem would have been remedied with a hint. Far too many of the objectives would have been improved with a simple explanation of what it wants. 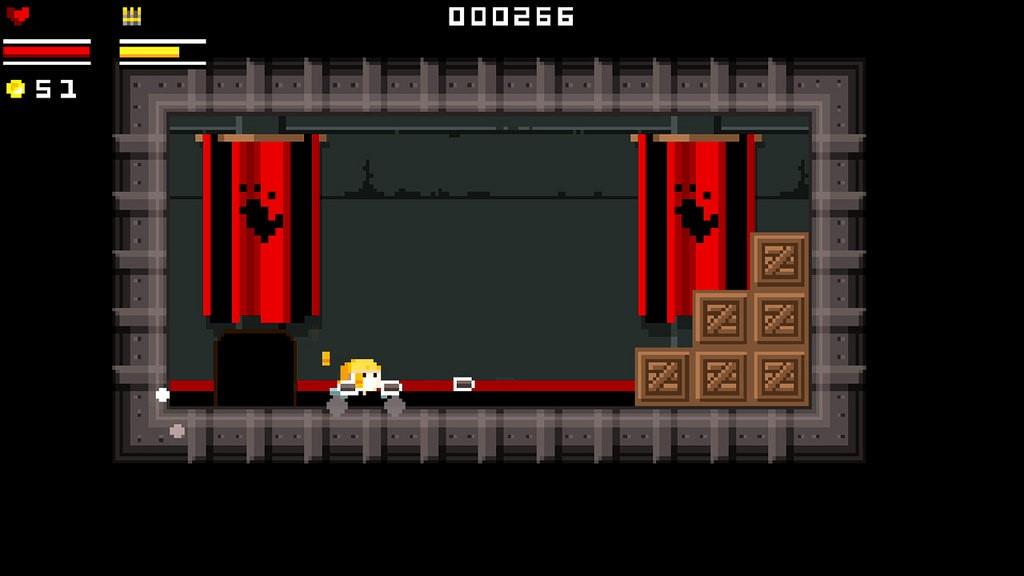 For the most part, the simplistic gameplay gets the job done. I wasn't too concerned about firing in all directions, as left and right got the job done. I also enjoyed the variety of the weapons, which include a flamethrower, egg gun and jetpack. What I don't like is that you can run out of basic ammo and not have a way to get more. It's a shame my character wasn't packing a knife or something that would give them a fighting chance.

As I mentioned, the levels are randomly generated. While I like this element of the game, it did feel a bit understated. There aren't a lot of elements that change, so it's not always clear you're playing a different level. Perhaps there's only so much you can do in the confines of a 2D shooter, but I wish there was a little more variety to the changes.

Although it has a story, Gunslugs is really just an exercise to earn a high score. Once you've memorized how the bad guys attack and the perils of each stage, it's relatively easy to buzz through the game on a single life. And don't worry about actually beating the game, because the stages start all over again, allowing you to earn an even higher score. The online leaderboard compares your score to the world, and helps track how your friends are doing.

The visual style is understandably simplistic, but not without a lot of charm. I especially loved the video game callbacks, especially when it came to the mini-games. The music is also incredible, offering a heart-pounding mix of upbeat chiptunes tracks.

Yes, Gunslugs is occasionally cheap and frustrating, but it's also incredibly fun and hard to put down. It has a lot of great ideas I would like to see built on and expanded, especially when it comes to the random level elements. Don't be fooled by the inexpensive price — Gunslugs is rich with fast-paced action and 2D shooter fun. Metal Slug should be taking notes.

Gunslugs is an action-packed mix of Metal Slug and Spelunky, seeing the player fight through randomly generated stages with only one life to live. Although simplistic, this old school throwback has a lot of charm and enough hooks to keep you coming back long after you've mastered the few stages and earned a high score.