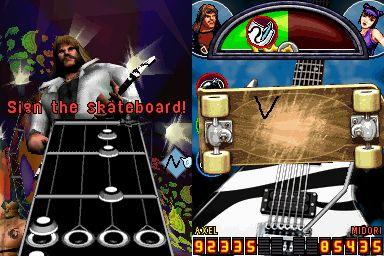 Written by Cyril Lachel on 12/24/2008 for DS
More On: Guitar Hero On Tour: Decades
When Guitar Hero: On Tour was released last June I found that I wasn't a big fan. Despite my interest in the regular-sized versions, this portable Guitar Hero just wasn't doing it for me. It cramped my hand, never felt natural and had a piss-poor selection of songs (many of which were covers). It hasn't even been six months and Activision is back with yet another Nintendo DS guitar simulator, this time called Guitar Hero: On Tour Decades. While they have gone a long way to improve the songs in the game, I would be lying if I said I had a better go of things this time around. The truth is, my opinion of this handheld franchise is largely unchanged, which is to be expected when it's only five months later.

To make this release relevant (and not just the desperate grab for cash that it actually is), Guitar Hero: On Tour Decades decides to mold itself around a theme. The theme they picked is decades, which means that you'll be tackling a few different songs from a series of rocking decades. The end result isn't all that different from your standard mix of rock songs, but I'll hand it to Activision for coming up with a compelling list of songs that in theory are a lot of fun to play. In truth this is nothing more than a full-priced expansion pack, but it has enough good songs to warrant a look if you were a fan of the first game.

The game starts you out in the "Modern" decade, which means that you'll have the pleasure of playing everything from Paramore's Crushcrushcrush to Dirty Little Secret by All American Rejects. From there you are transported to the 2000s. Wait a minute, wouldn't the 2000s be modern? We aren't even out of the 00s, so how can there be anything more modern than this? They explain this away by having you play slightly dated songs like the Red Hot Chili Pepper's Can't Stop (2003) and Jimmy Eat World's The Middle (2001). Sure those songs are slightly older, but it's not like that All American Rejects song came out long after the Red Hot Chili Pepper's cut. At most there's a two year difference, hardly enough to warrant two different sections.

But I digress, from the 2000s we (predictably) head to the 1990s, where you'll find Blind Melon's No Rain, Stop Temple Pilot's Down and Weezer's Buddy Holly. From there it's just a short jump down to the 1980s, which is where you'll find Bon Jovi's You Give Love A Bad Name, Los Lobos' La Bamba (the cover done for the 1987 movie) and R.E.M.'s The One I Love. And if you can complete all those songs, you'll finally hit the hardest section of them all, the 1970s. In this section we get such classics as One Way or Another by Blondie, Boston's Rock and Roll Band and a live version of Sweet Home Alabama by Lynyrd Skynyrd. All together there are more than two dozen songs, including a couple of bonus tracks that you'll wish were either on Guitar Hero: World Tour or Rock Band 2.

While the track list is solid (light years ahead of what we got five months ago in the original Guitar Hero: on Tour), there was something curious about it that kept nagging me as I played it. It wasn't until I got to the end that I realized that I owned most of these songs in Rock Band. Not necessarily Rock Band 1 or 2, but a combination of the two, as well as the downloadable content I've bought over the last year. Not that there's anything wrong with that, but after counting the songs I found that more than half of the tracks appear in other games ... where they are infinitely more fun to play. 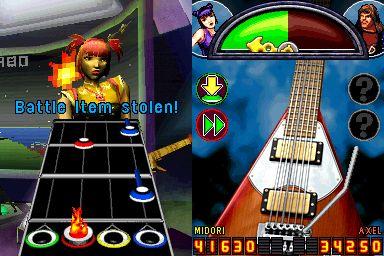 Aside from the game's use of decades, Guitar Hero: On Tour hasn't really changed. Not that you would expect it to go through some magnificent transformation, this "sequel" is coming out mere months after the first game and not trying to reinvent the wheel. At best you get new songs, guitars and venues to play in (each of them based on whatever era you're playing in). But for those like me who had problems with the game the first time around, none of the problems have been addressed in this expansion pack.My biggest complaint with the game was that it just didn't feel right. Not only does it not feel like you're playing a guitar (something the console versions do an excellent job at), but half the time it doesn't feel like you're doing much of anything. You're expected to strum by moving a pick-shaped stylus over the touch screen. But this never feels natural and it's not always as accurate as you would like it to be. I personally found it easier to just use the side of my thumb, but even that failed to register more times than I would like to count. It feels like you're supposed to hit the touch screen in a very small area, yet it's easy to accidentally miss that area because you're rarely looking at that screen.

Another big problem with the game is that it's painful to play. I can handle getting warn out by Dance Dance Revolution or having my arm hurt while playing some light gun game, but there's something wrong when my left hand is all cramped up after only one or two short songs. The game straps your hand in what has to be the single most uncomfortable position and then asks you to move it about, all while you attempt to hit the small strum section on the touch screen. The problem is obvious, and I'm not entirely sure there's a solution. If you have teeny tiny hands you may be able to come away from the experience without suffering too much pain. But anybody with average hands will surely rue the day they decided to play You Give Love A Bad Name on expert. 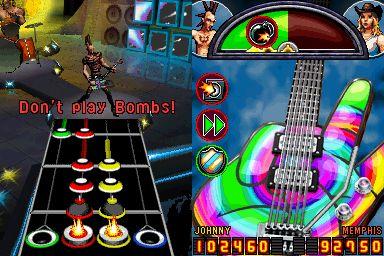 Beyond all of the complaints, Guitar Hero: On Tour Decades does offer a couple of nifty improvements that make this a better product. One thing you can do now is go through the single-player campaign as a bassist/rhythm guitarist. This means that the note charts aren't going to be as complicated as you would have with the lead guitar, which is perfect for those just starting out. Hardcore fans of the first game will probably just skip right over this addition, but it's nice to see Activision adding something new to the formula.

Even more intriguing is the ability to share your tracks from Nintendo DS to Nintendo DS. Let's say your friend owns the original Guitar Hero: On Tour, but not Decades. Don't worry about it, just as long as both players have their guitar accessory plugged in and a Guitar Hero: On Tour card ready to go, you will be able to share music back and forth. Not only does this open up the Decades music to new people, but it also allows you to go back and play some of the original tracks. I can see this mode getting a lot of use, and Activision should be applauded for not forcing people to own both versions of the game.

The game's multiplayer modes still remain. In a lot of ways the multiplayer is taking its cue from the battle modes in Guitar Hero III; players battle for power-ups that will make your opponent screw up and ultimately fail out of the song. However, in this game you have a number of cool Nintendo DS power-ups. For example, you can set your opponent's guitar on fire, which will make him blow into the Nintendo DS's microphone to extinguish the problem. Another power-up requires your opponent to sign his name for an adoring fan. And in yet another interesting twist the screens will switch, which can really mess you up. All of these cool powers make me wish that there was a better game for me to use them in, but alas you're stuck listening to crappy covers of songs you don't even like while your hand cramps up with pain. 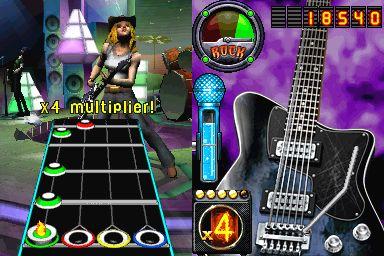 Much like the original, the game's audio is passable and not much more. You won't confuse the sound coming out of your Nintendo DS with CD sound, but by now you already knew that. For the most part the game does what it's asked to do, the sound effects work and you can always tell when you accidentally miss a note. I wouldn't say the audio is better this time around, but I would say that the songs coming out of the speakers are much better in Decades. Even more impressive is that this time around there are no cover songs. That's right, every single song found in Guitar Hero: On Tour Decades is a master track. You can definitely tell that Activision put more time and resources into this game, perhaps seeing how popular the first game was.

What can I say, Guitar Hero: On Tour Decades just isn't my thing. I commend everybody involved for trying, but I still say that a portable guitar game is unnecessary. This is especially true after you find your hand throbbing from pain. If you're one of those people who liked the original Nintendo DS game, then chances are you're going to have a blast playing through this new batch of tunes. Everybody else should just stick to the home console version, it has better songs, more modes and actually feels like you're playing guitar. That's not to say that this franchise can't be perfected on a handheld system, but you can't expect too much from an expansion pack that came out a mere five months after the original.
In almost every way Guitar Hero: On Tour Decades is exactly like the original. It still hurts your hand, has tinny audio and doesn't feel quite right. On the other hand, it does have a better list of songs and a cool mode where you can share songs with friends. There's a lot to like here, but it's almost impossible to enjoy this portable Guitar Hero when you're hand is throbbing after each and every song!