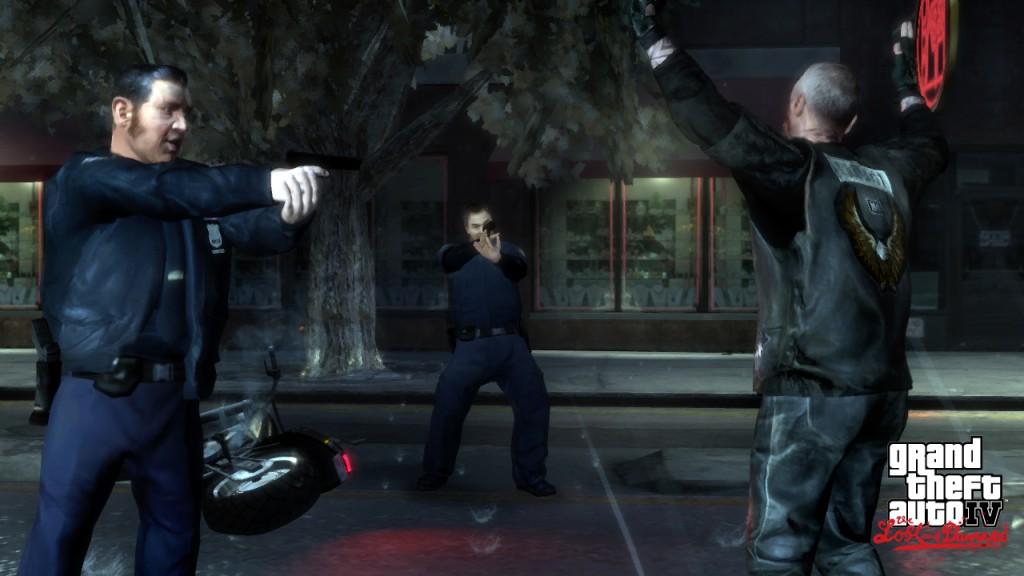 Written by Cyril Lachel on 2/23/2009 for 360
More On: Grand Theft Auto 4: The Lost and Damned
After putting so much time into last year's stunning Grand Theft Auto IV, I wasn't sure how excited I was to visit the crime-ridden streets of Liberty City again. But like any good vacation, the moment I arrived in town I was immediately won over. Grand Theft Auto IV's first expansion pack, The Lost and Damned, may not include a new city or that many new colorful characters, but it does have a fascinating story that manages to feel different enough to differentiate itself from the past Rockstar Games titles.

You play Johnny Klebitz, a minor character in last year's GTA IV who just so happens to be in a biker gang known as The Lost (he's also the first Jewish protagonist in the Grand Theft Auto universe). Like all of the biker gangs you see in the movies, The Lost is made up of a motley crew of low-lifes, junkies and other assorted criminals. The leader of the gang, Billy Grey, just got out of rehab and is looking to catch up on old times, which involves stealing other people's bikes, starting a few unnecessary gang wars, and smuggling in some hot diamonds. And so your adventure begins.

Seeing as this is a Grand Theft Auto game you can expect to do a lot of errands for Billy. Most of the first half of the game involves you doing your part to cause trouble and take out those who oppose you, in other words you'll be forced to do the same sorts of missions that made this series so popular in the first place. Before long Johnny will start to gain a little power, and you'll suddenly go from taking orders to calling the shots. Veterans of Rockstar Games' popular franchise will no doubt start to recognize some of the cliches in the story, but the game's two dozen missions do tell an interesting story that has a satisfying conclusion.

Although it's hard to tell at first, this expansion pack's story runs concurrent with that of the Grand Theft Auto IV narrative. In fact, some of the most memorable parts of the game involve you interacting with many of GTA IV's color characters. Not only do Elizabeta Torres and Ray Boccino make an appearance, but fans will also be happy to see favorites such as Niko and Roman Bellic show up. While most of the game has you focusing on your own troubles, from time to time you'll end up having to run a mission that involves one of the Bellic boys. One of the missions is pulled directly out of Grand Theft Auto IV, only this time around you see it from Johnny's point of view. It's little moments like this that flesh out the original game's story and make you feel like you're really experiencing something epic.

The truth is, those who weren't especially happy with Grand Theft Auto IV will continue to not be happy with this game. The Lost and Damned doesn't attempt to fix the problems that some gamers had, instead it adds to the experience by giving you context, perspective and sympathy for everybody involved. Johnny isn't as instantly likable as Niko, but by the end of the game you will feel like you've been through something emotional that is bigger than the people involved. This point is hammered home when you start to see how the little things you did in GTA IV affect the characters in The Lost and Damned, and vice versa. 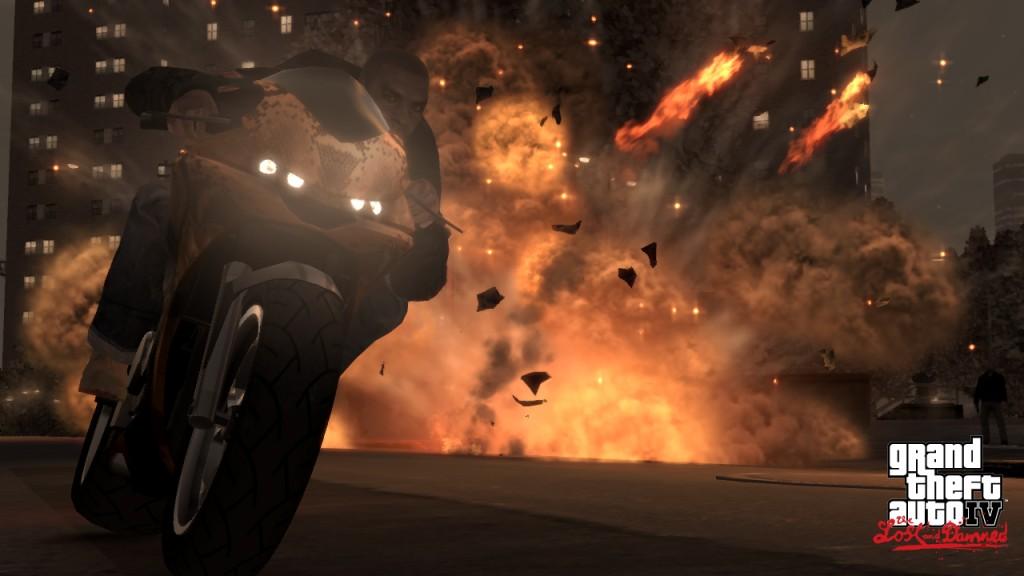 As a $20 expansion pack you can't expect the game to be as long and deep as last year's GTA IV, but The Last and Damned certainly tries to convince you that it is. The game runs around ten hours, though I could see that ten hours quickly turning into twenty (if not more) if you complete all of the side missions and mini-games. And that's just the start of it, the game also features brand new TV channels and a couple of new radio stations (with more than fifty new songs added). Throw in a dozen new motorcycles (with improved handling) and you have yourself one of the most impressive expansion packs I've seen since Bethesda unleashed Shivering Isles two years ago.

What struck me about The Lost and Damned wasn't the story or the new radio stations (neither of which I cared much for), but rather how different the tone of the game was. In Grand Theft Auto IV the whole city feels fresh and new, thanks in large part to the fact that you play an immigrant who, like you, is experiencing this huge city for the first time. In this expansion pack you already know the city, so instead of being fresh and new, Johnny sees this city as being old and run down. It's amazing how much the developers can do to your perception of this city when playing with graphic filters and the atmosphere. For much of the game I genuinely felt like I was playing in a brand new city, yet deep down I knew this world like the back of my hand.

Perhaps there's some truth in the fact that I'm seeing this city for the first time. Let's face it, when I played through GTA IV I spent a lot of my time ignoring traffic by hailing a cab. Oh sure, I did a lot of driving around, but there came a point when I was just sick and tired of traffic jams and wanted to get from one side of the city to the other as quickly as possible. That wasn't the case this time around. The developers wisely made your bike easy to find (even marked on the map, just in case you lose track of which one is yours). There were very few times when I was without my trusty chopper, which ironically made the whole grand theft auto thing pointless. 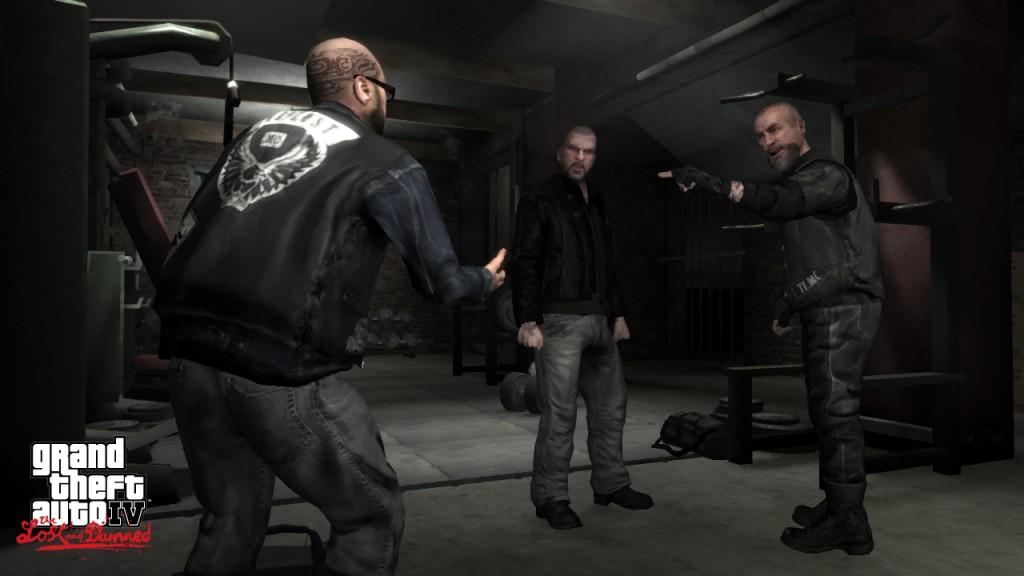 It's more than just always being able to locate (or call up) your bike, it's also the way this vehicle makes you feel when motoring around the busy streets of Liberty City. Your speedy bike is big and loud, but small enough to weave in and out of traffic and bypass all of the city's traffic jams. It's menacing enough to scare anybody that even thinks about walking out in front of it. And yet it's oh so easy to control, which makes it the perfect vehicle. Best of all, Johnny knows how to stay on his bike. This is not one of those games where you'll be falling off your bike when you hit a small bump in the road, Johnny only seems to get knocked off when you completely flip your bike ... and even then half the time he comes out unscathed. These new bikes rock!

And what kind of bike gang would it be if you didn't have a posse just waiting to help you out? Early in the game you'll find yourself driving around with a good half dozen other bikers by your side, but even when a lot of those characters splinter off you'll always be able to call up at least two (sometimes more) bikers to come and aid you in your adventure. Best of all, these non-playable characters have their own stats which you can improve over time. The idea of always having computer-controlled characters helping you out is a good one, and hopefully it's something that all future Grand Theft Auto games will incorporate.

Beyond the motorcycles, missions and music, The Lost and Damned is just another fun Grand Theft Auto game. That means that you should expect tons of violence, a heavy dosage of salty language and maybe even a thing or two that will shock the most hardened gamers (such as full frontal male nudity). The writing remains top notch and the voice acting is spot on, especially when it comes to the supporting cast. You even get a few recycled lines from Niko to remind you how cool the guy was. If you're the kind of person that had a great time with Grand Theft Auto IV, then this expansion pack will scratch every possible itch you could have.

And did I mention that the game comes with a whole host of new online modes? Well it does, and not a moment too soon. There's no doubt that last year's Grand Theft Auto IV offered a number of exciting multiplayer modes, but after a year of non-stop playing it's easy to get bored and want to move on to Call of Duty: World at War, Gears of War 2 or, heaven forbid, Saints Row 2. The Lost and Damned should go a long way to resurrect your love for online GTA battles. 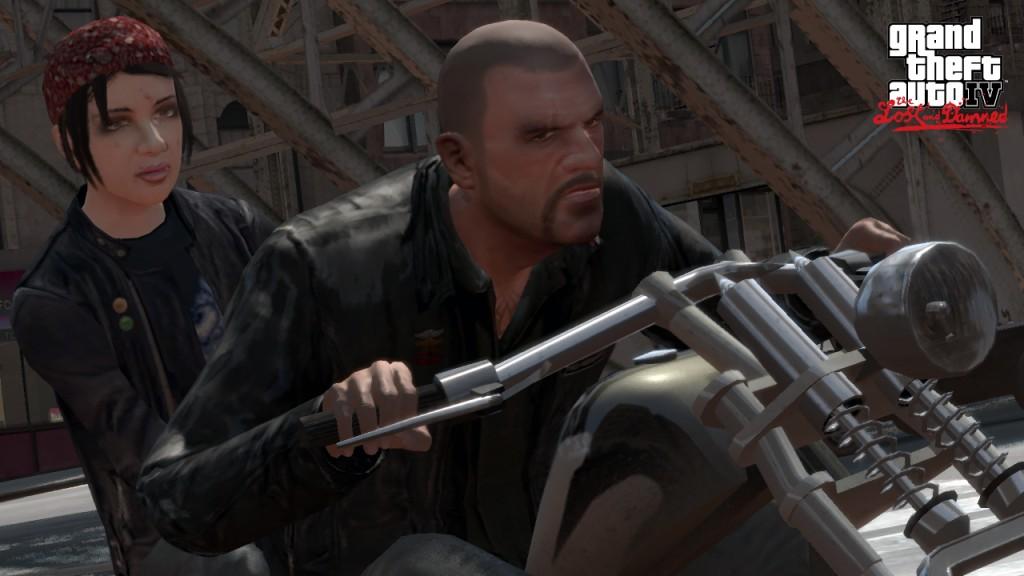 When it comes to the online multiplayer mode, the bikes really do make all the difference. Many of the original online modes make a return in this game, but they improved with the addition of new weapons and vehicles. Perhaps the most noteworthy modes include a Road Rash-style bike race that allows you to use a baseball bat to knock people off their bikes and a mod e that allows you to race a motorcycle against a helicopter (I'm not kidding). Even if you find these additional modes gimmicky, there is still enough good old-fashioned run-and-gun action to keep you coming for more.

There was no doubt in my mind that Grand Theft Auto: The Lost and Damned would turn out to be a solid expansion pack to one of last year's best games, but I didn't expect there to be this much to do. At twenty dollars it's hard to complain, especially when you see how many different missions and multiplayer modes you get. If you're a fan of last year's entry then this is a no-brainer, but those who were disappointed with GTA IV will likely be similarly letdown with this release. Although I had some reservations against moving back to Liberty City, I quickly got over my fears and had a wonderful time. I just hope that next time around we not only get a brand new story, but also some new areas to explore.
The Lost and Damned gives you everything you could possibly want in a Grand Theft Auto expansion pack. It offers more action, more crazy characters and more incredibly sticky situations. It also features a fantastic story that manages to tie everything in the original GTA IV together in surprising ways. If you're a GTA fan, then you have no excuse not to pick up The Lost and Damned!