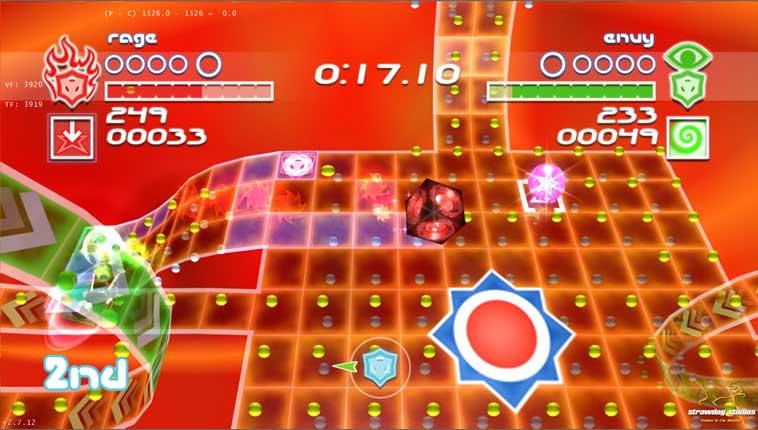 Written by Cyril Lachel on 10/18/2007 for 360
More On: Geon emotions
The nice thing about the Xbox Live Arcade is that you generally know what you're getting before you download it. Beyond the classic games that everybody knows (Sonic, Bomberman, Doom, etc.), the Xbox Live Arcade also features Texas Holdem, Uno and a bunch of other games that people will instantly recognize. But every so often there comes a game whose name is no help whatsoever, the kind of name that doesn't give you any kind of hint as to what kind of game it is. Ladies and gentlemen, I give you our newest example of this phenomenon - GEON: emotions.

If you can't figure out what GEON: emotion is based on its name then don't feel bad, because I certainly wouldn't have guessed the genre by looking at that title. In fact, if I had to wager a guess at what kind of game it is I probably would have guessed it was some sort of life simulator, or perhaps even one of those Japanese dating games. But it's not, GEON: emotion is the new puzzle game for the Xbox Live Arcade, it's the first game created by Strawdog Studios, the relatively new UK-based developer.

GEON: emotions is something of a variation on the Pac-Man theme, you play a small cube who is tasked with moving around a large maze/grid picking up all of the yellow dots. What sets this game apart from the obvious Pac-Man comparisons is that this game is all about the one-on-one battles. Think of this as a three-dimensional Pac-Man built for two players. The way it works is that there are two people on a single board at the same time. One person is on the top and the other person is on the bottom of the board. Each player is doing their own thing by picking up their own dots, ultimately trying to clear the board before the other guy. The problem is that each player can only hold a certain amount of yellow dots at one time, so the object of the game is for you to move around the board filling your yellow dot meter and then depositing them a large marked circle. But that's easier said than done, because in order to deposit those yellow dots you will have to switch sides with your enemy and move to their goal. The player that is able to clear the board and takes their five filled yellow dot meters to the enemy's goal first is the winner. It's that simple.

What makes all this even trickier is that each player will pick up various power-ups along the way. Some power-ups will improve your attributes, such as the power-up that doubles your speed or the one that makes you magnetic so that the yellow dots will come to you ask you traverse the level. Other power-ups are more about screwing the other player up, such as an item that makes your enemy lose a bunch of his collected dots or one that blocks your opponent's path. Knowing how to use these power-ups is the difference between winning and losing, especially when you jump into a multiplayer game.

I bet I know what you're wondering, where does the name GEON: emotion fit in to the game? Oddly enough the game's characters are all based on various human emotions, such as rage, fear, envy, melancholy, bliss, passion, and courage. While each of the characters (which are really nothing more than small blocks) play the same, you will find that each of the emotions have a different special power-up and a slightly different look. For example, the Passion character will allow you to move across the board in a split second while hearts float out of the block.

What will keep you coming back for more is the nice variety of level designs. In all there are 32 levels (not including the single-player only mini games), there are eight types of levels with four variations each. Although you may not see it at first, GEON's level designs are ingeniously laid out. The further you go into the 32 levels the more complex and downright over-the-top the levels become, many of which include moving platforms, loopty loops and other obstacles. By the end of the game you are being asked to collect hundreds of yellow dots before your opponent, a task that can get real tricky when you combine the power-ups and moving platforms.But no matter how many obstacles they throw at you, the duel portions of GEON: emotions are a little too easy. On the normal difficulty setting you probably won't lose very often, unfortunately this means that you'll be able to speed through the single-player duel mode in only a couple of hours time. Thankfully you can change the difficulty, but even then you'll probably walk all over your opponent without even blinking an eye.

On top of the standard duel mode, GEON: emotion comes with an interesting time trial option that is both exciting and infuriating all at the exact same time. As you might have already guessed from the name, in time trial you are asked to collect all of the yellow dots and complete the level in the shortest amount of time possible. While you should always strive for the gold medal, this time trial mode also offers silver and bronze medals for slower times. But just because there are three medals does not mean that this mode is easy. The problem with this mode is that there's a second player working against you, which doesn't make a lot of sense seeing as this is not a duel. This means that as you're collecting all of the dots trying to make it in time you're having to contend with the enemy throwing up road blocks that slow you down. All it takes is one poorly timed power-up and you're out of contention for a medal. Worse yet, there's no way for you to restart the level, so you'll constantly be forced to either complete the level (which can take several minutes) or go out to the main menu and come back in. A simple restart option would have made this frustrating mode a little less infuriating.

On top of the time trials and the duel mode, players are presented with a collection of extra levels, or mini games. These mini game levels don't differ much from the standard modes; in fact, the only difference is that you aren't playing against another player. Instead you are trying to collect all of the dots and make it to the end of the level while dealing with strange enemy blocks that shoot out silver bullets. Even though I wasn't battling somebody else, I ended up having a lot of fun playing through these levels. It's in the mini game department where GEON really shines; the level designs here are among the best in the entire game. The fact that the creators decided to model a level after the original Pac-Man board is a great homage to the game that obviously influenced this product. Unfortunately there are only 8 of these levels, so this mode is over just as you're starting to get into it.

Given that much of the game is spent playing against a computer-controlled opponent, it makes a lot of sense that GEON: emotions is also a multiplayer game. Gamers are able to jump online and play through a number of different multiplayer modes, including the standard duel, a team mode, and last man standing. Unfortunately I was never able to find anybody to play against online. Perhaps it's just the timing of the review (I played through it the same week Halo 3 was released), but after multiple attempts I have yet to be able to find even one person to play this with online. Judging by single-player content I can certainly see how this could be an amazing online multiplayer game, but as of this writing I have no experience with that mode.

Like a lot of puzzle games on the Xbox Live Arcade, GEON: emotions is a good looking game with colorful (read: trippy) graphics. Although the actual look of the game is very simple, there is a nice clean visual style here that feels fresh and original. What's more, the colors are never too overwhelming and it's easy enough to move the camera around so that you can see the maze from any point of view. The graphics certainly can't compare to something like Halo 3 or Gears of War, but it definitely looks better than a lot of the puzzle games on the Xbox 360.

The problem with GEON: emotions is that it's over far too quickly. Unless you are trying to get gold in every time trial, chances are you're going to complete the game in a matter of hours. Worse yet, the game has a tendency of getting a little repetitive the more you play it. This is only made worse when you have to put up with push-over computer opponents that give you no challenge whatsoever. The game's limited scope may appeal to some people, but at $10 it just doesn't feel like you get enough for your money. GEON: emotions is an interesting idea with a good execution and a solid graphic style, I just wish there was more to the game. If you're one of those gamers who can't get enough of Pac-Man style games then this may be the game for you, but everybody else may want to check out the demo and see if they can imagine playing this enough to get their money's worth.
GEON: emotions is a solid stab at the Pac-Man style of puzzle game, but it's brought down by the high price point and limited amount of modes. You'll probably have fun with the game for a few hours, but with nobody to play with online and only 40 levels it's hard to recommend this game to anybody but the most hardcore Pac-Man fanboy.