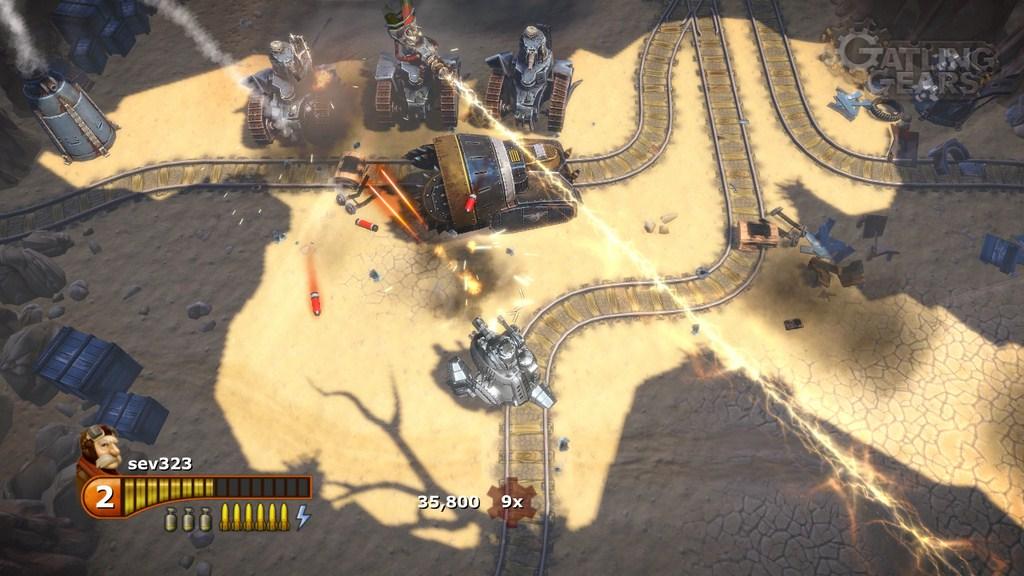 Written by Cyril Lachel on 7/26/2011 for PS3
More On: Gatling Gears
I'm told that Gatling Gears is a sequel, but you wouldn't know it by looking.  It took me several hours to catch on that this dual-stick shooter is the follow-up to Greed Corp, a game I own and put a lot of time into.  Up until I had my epiphany, this was just another middling action game with generic levels and boring weapons.  Now I see the connection, but I can't help feel that Gatling Gears is yet another missed opportunity.

In case you missed the 2010 original, Greed Corp was a turn-based strategy game revolving around harvesting land and building up armies.  While it had an interesting premise (complete with harvested land dropping from the map entirely), the end result was a muddled mess filled with one questionable decision after another.

For the sequel, Vanguard Entertainment decided to go the complete opposite direction.  Gone are the days of harvesting land, instead this game plays out like every generic dual-stick shooter you've played since the launch of the PlayStation 3.  You wander through five lengthy levels (and a prologue) dodging bullets, shooting bad guys and causing the usual amount of destruction.  The only thing different about Gatling Gears is that the player fights in a large mech.  Outside of that one change, this overhead action game is indistinguishable from about five or six other downloadable releases. 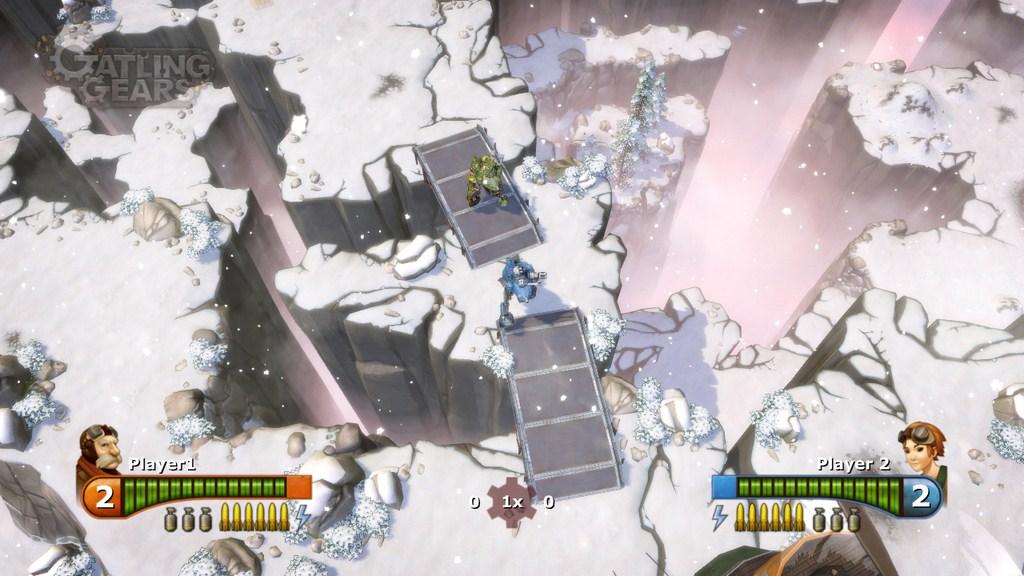 The player has three basic attacks that can be upgraded over the course of the game.  Your main attack is a short-range machine gun that never runs out of bullets.  You also have a long-range missile attack and powerful grenades that can be lobbed at tanks and other baddies.  Although these weapons are powerful, they are also limited.  Thankfully these alternate weapons refill over time, which means that players will have to manage their time wisely.

Sadly, those are the only weapons in the game.  From time to time you'll pick up an item that super-charges one of these weapons, but it's short lived and not as satisfying as having a brand new gun.  Even upgrading these weapons (and your armor) doesn't do much.  While your bullets, missiles and bombs do become noticeably more powerful, there's very little difference in how they look or act.  It didn't take long for me to get tired of using the same weapons and thus lose interest in this unambitious shooter.

This isn't helped much by the pedestrian level designs.  From time to time you'll see a glimmer of potential (such as parts of the level breaking apart), but those parts are too far apart to leave a lasting impression.  I was happy that the five stages offer unique locations, such as a desert, city, forest, etc.  Sadly, we've seen a lot of these types of levels in other overhead shooters.  For what it's worth, the attention to detail in these levels is outstanding. 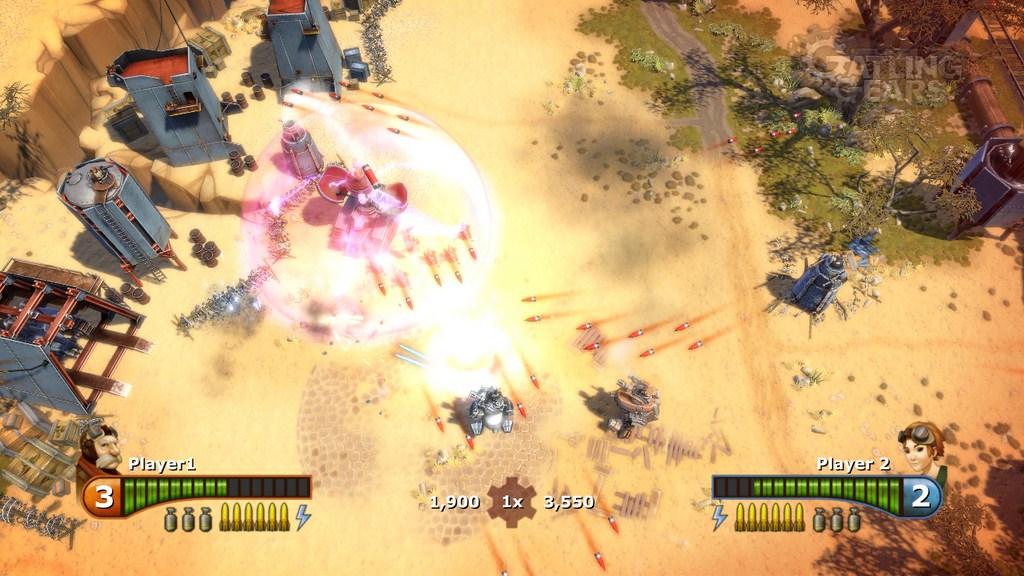 Gatling Gears can be played as both a single- and multi-player game, which is common for this style of product.  As is true with almost everything, this is a much better experience with a buddy helping out.  The good news for solo players is that the game is easy enough to play by yourself, at least until you get to the very end.  I buzzed through the first four stages without continuing once, but found myself stuck on the find two sub-sections for two days straight.  The spike in difficulty at the end is jarring to say the least.  I wish that the frustrating finale wasn't the last thing I took from the game, because it certainly overshadows what could be a solid shooter.

Oddly enough, it's what the game doesn't do that disappoints me the most.  The advantage of being a follow-up is that you can expand the universe.  Here is a chance to make us care about the action by tying in elements we liked about the first game.  But that's not what happened here.  Instead of creating an interesting narrative, they decided to keep the look and nothing else.  Occasionally people will talk to you, but it seems opposed to moving an actual story along.  At the end of the day you're just moving forward and shooting, something I've done countless times before while playing better action games.

While I was impressed with the detail in the backgrounds, the game does have some serious graphics issues.  For one thing, many of the soldiers are microscopic.  I don't care if you have a 70 inch high-definition television, you're going to need to get right up to the screen to see half of the enemies.  Thankfully the tanks and mechs are larger, but there's nothing about them that is unique or interesting. 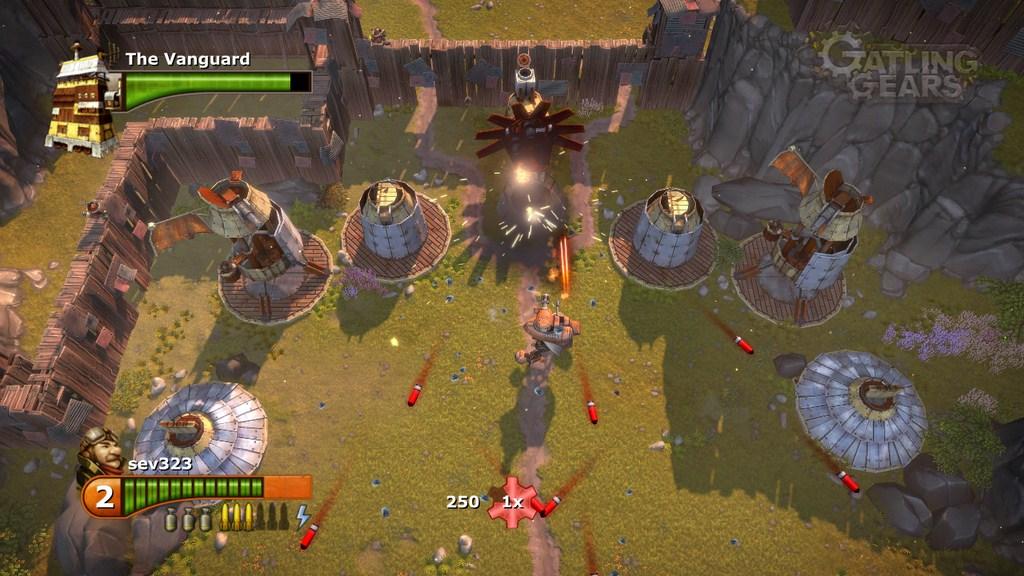 To make matters worse, a good chunk of real estate is used up by the obnoxious interface.  Your life bar is gigantic, as is the annoying score multiplier that players rarely have to look at.  Bringing a second player means that nearly 20% of the screen is blocked out; making it impossible to see what you're doing if you accidentally get stuck in a corner.  I died far too many times because I was forced to dodge bullets underneath my depleting life bar.  Not cool.

Gatling Gears isn't a terrible game; it's just not very original.  Players who have been looking for another two-player shooter can do worse than this, though I wouldn't put it anywhere near the top of the must-own list.  I love the idea of exploring this world through multiple genres, I only wish they would find one that compliments the story they're trying to tell.
Gatling Gears isn't a terrible shooter, but it also lacks any ambition. As dual-stick shooters go, this is another lazy attempt at the genre. The boring weapons and mediocre level designs won't win this game any awards, but they also won't ruin an otherwise unspectacular action game!